Accessibility links
In 'She Wants It,' Jill Soloway Gets Transparent About Their Life And Work The creator of the hit show about a trans woman and her family says patriarchy and white supremacy have a hold on storytelling in Hollywood — and other people want a chance to speak. 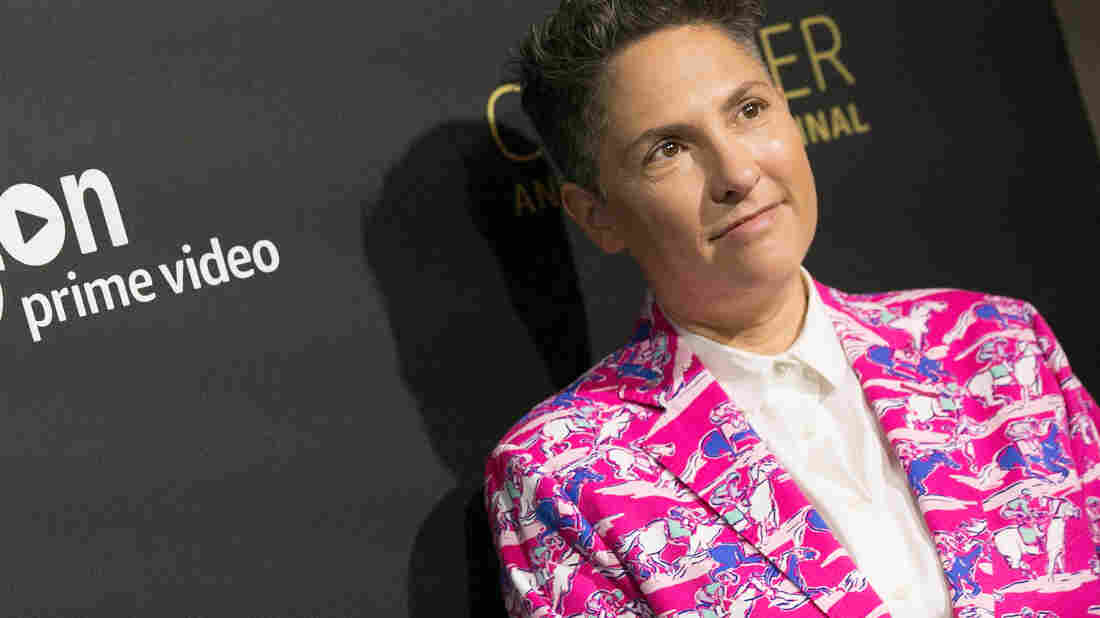 Jill Soloway is the creator of Transparent — their new memoir is called She Wants It. Gabriel Olsen/FilmMagic hide caption 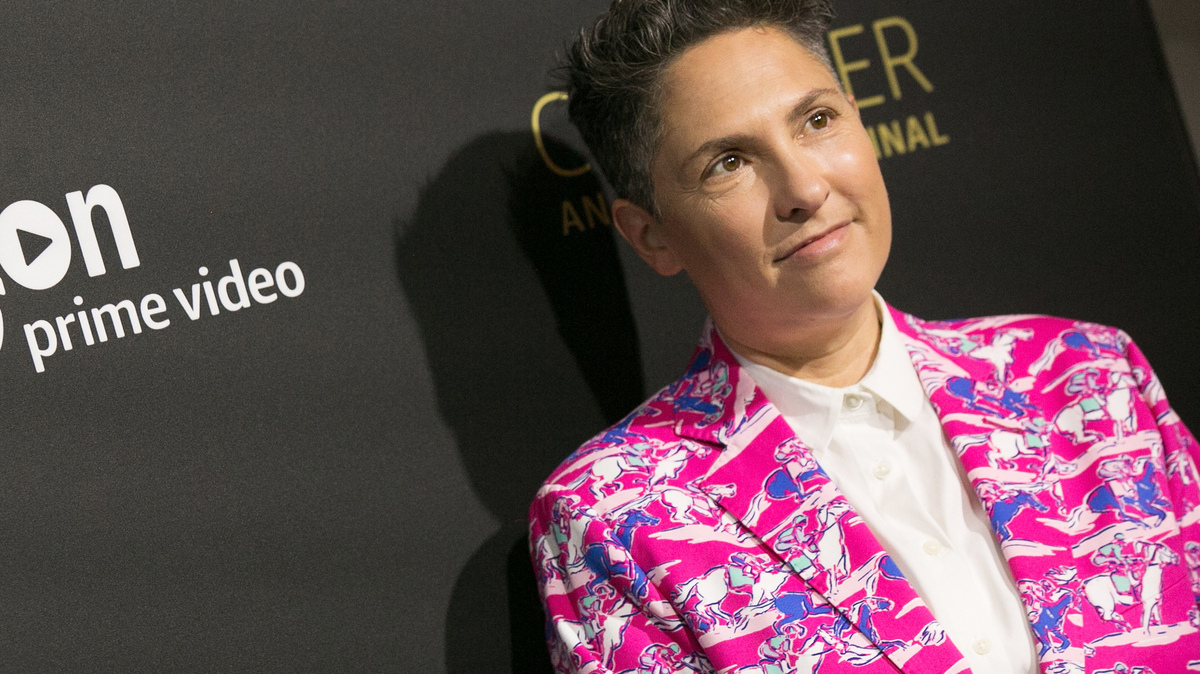 Jill Soloway is the creator of Transparent — their new memoir is called She Wants It.

Jill Soloway is the Emmy and Golden Globe Award-winning creator of the show Transparent, and also the co-creator and director of the show I Love Dick. 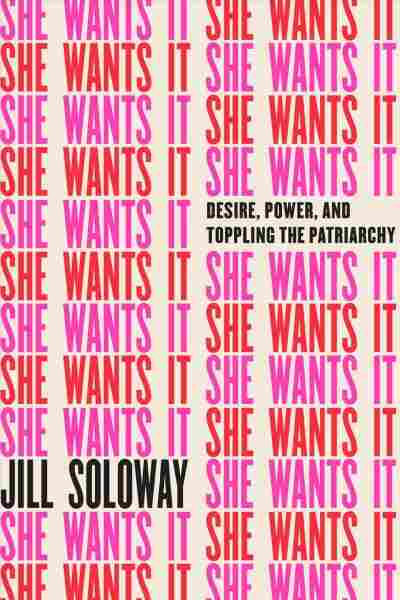 Desire, Power, and Toppling the Patriarchy

Their new memoir is called She Wants It: Desire, Power and Toppling the Patriarchy. And despite that title, let's note right away: "She" is not their preferred pronoun.

"You know, when I sold the book I actually didn't identify as either queer or even nonbinary," Soloway says. "Towards the end I think I asked my editor do I need to change it to They Want It, or We Want It, or She Wanted It, or any of these things."

The title stayed, and She Wants It became a memoir about family, about creating Transparent and about coming into a nonbinary identity.

On the phone call which inspired Transparent

I was just working in Hollywood, kind of banging my head against the glass ceiling. I had had a whole bunch of success, I guess on paper, working on fantastic shows like Six Feet Under and Gray's Anatomy. [I] had just gotten a film into Sundance, and was starting to think of myself as a director, but feeling very, like, crawling towards this goal in this very maybe way. I wasn't sure if I was ever going to quote-unquote make it.

And it was just a regular morning. Got a phone call — my parent called me, and we were talking about something else, and within that phone call, my parent came out as trans. And I think that was like a huge lightning bolt that really kind of shattered my reality for a little while. But also there was this moment where my thought was: Oh, this is the show you're going to write.

On questioning their own gender and sexual identity

Growing up in this sort of typical Jewish upper-middle-class family, my sister had come out as gay, and I guess there was some reason that I thought in my head: OK, she's the gay one and I'm the straight one. Like, let's just be quote-unquote normal. And then when my parent came out, I started to just kind of instantly feel in some ways that I now had this genetic legacy of queerness and even of transness, and that not only would it not be odd if I started to explore the idea of my own queerness, but that in fact it would be weird if I didn't. And then from there, I think a couple years later, the idea of, like, wait a minute, I also may not need to identify as a woman. Meeting so many non-binary people in the world of Transparent, and literally just looking at people who didn't necessarily see themselves as male or female, but somehow both, and neither, and either in every moment — it seemed a really comfortable place to live.

On the struggle to find success in a male-dominated Hollywood

I wasn't experiencing it traumatically. I was sort of going, "Yeah, I'm not ready, they're right. There's something I don't know yet — I don't really know enough about cinematography or lenses. So they're probably right. I should probably learn." I didn't understand just the depth of the ways in which white, cis men will always lean toward hiring other white, cis men because they're ending up unconsciously protecting their own privilege.

But I am working with Time's Up, with an organization called 50/50 by 2020. So we're specifically writing this narrative within people in Hollywood to say that women, people of color, queer people, trans people, disabled people and other otherized people are all suffering from the same problem, which is that patriarchy and white supremacy have a hold on storytelling. And other people want their chance.

... patriarchy and white supremacy have a hold on storytelling. And other people want their chance.

I was really ignorant about trans politics. I guess first, before I unpack everything that happened, I always want to say that Jeffrey Tambor's portrayal of Maura was absolutely astonishing and beautiful, and Jeffrey's a fantastic actor. But also I was making a huge mistake around trans politics by having a cis man play a trans woman. Because for trans women, they are being accused by people of "being men dressing up as women." That's what makes trans women so vulnerable in public. So having even Jeffrey Tambor dressing up as a trans woman may have translated to people who weren't in the know as: This is what trans women are — men dressing up as women. So not only was it a problem with casting. It really was a very, very, very dangerous, dangerous thing for trans women.

On whether they would make a different casting choice now

You know, people ask me that question. And I think time-machine questions are really odd, because I couldn't go back, because the world has changed so much. And when I was making Transparent, I myself really didn't understand my own parent's transness yet. And I still had so much of my parent's image in my mind of when she was presenting as a cis male that it didn't even occur to me to cast a trans woman. So I think it is what it was, and what it was was the show it was with Jeffrey in it.

On their reaction to the allegations of sexual assault against Jeffrey Tambor, and whether they were a surprise

Yeah, they were ... It was so interesting, because I was with the people of Time's Up, and agitating for this notion of, you know, one of the things that I wrote on a Post-it is, I was like: What do we want in this moment right now? — I wrote "unlock all NDAs." NDA stands for nondisclosure agreements. I felt that what Hollywood really needed was to make an accounting of how much money was spent to put tape over women's mouths.

And then I was faced with this instance, on our show, where some trans women wanted to tell their story. And I was confronted, I think, with my own trans misogyny, where I didn't immediately say to [accusers] Van [Barnes] and Trace [Lysette]: "Let's stand up and tell your story." Instead, I went a little bit into protection mode and, as you said, thought about the show. And thought about everybody's financial earnings. I thought about what the world would think of a show like Transparent if it was connected with this reckoning. What I needed to recognize, but it took me a minute, was the heroicism of both Trace and Van for taking their stories and being willing to say them out loud, and in many ways sacrifice themselves. So in retrospect I would like a time machine on that one.

On Soloway's advice for those caught in similar situations

And in terms of the men ... I think it's really about men deeply, deeply, deeply spending a lot of time and energy trying to understand how patriarchy protects their privilege.

For me, this is a time for emotional tenderness toward everyone, especially toward the victims who are willing to sacrifice again. It's a very sacrificial act. And in terms of the men and the people who are being accused, I think it's really about men deeply, deeply, deeply spending a lot of time and energy trying to understand how patriarchy protects their privilege, and thinking of actual ways and tactics that they can take to begin to make up for the harm they've caused before they ask to come back. That doesn't mean we don't treat them with tenderness and love.

On whether that applies to Jeffrey Tambor

Of course. I mean, Jeffrey Tambor is a member of my family. I never want to put the protection of Jeffrey Tambor's career over the protection of Trace Lysette's career, and Van Barnes' career. And I think that's what happens. As a culture, we're naturally patriarchal, so we naturally go "well, what about him?" And I think there are a lot of straight, white, cis men who have had positions of power, and their expectation to continue in that power for the rest of their lives is part of what I think has them unconsciously demanding that they place their pain first before everybody else's.

Denise Guerra and Samantha Balaban produced and edited this interview for broadcast. Patrick Jarenwattananon and Petra Mayer adapted it for the Web.