Accessibility links
White House Counsel's Exit Brings Attention To An Office With A Past Don McGahn's tenure was capped by shaping Brett Kavanaugh's fight-back rebuttal against allegations of sexual assault. The office has been a perch for major figures from John Dean to Alberto Gonzales. 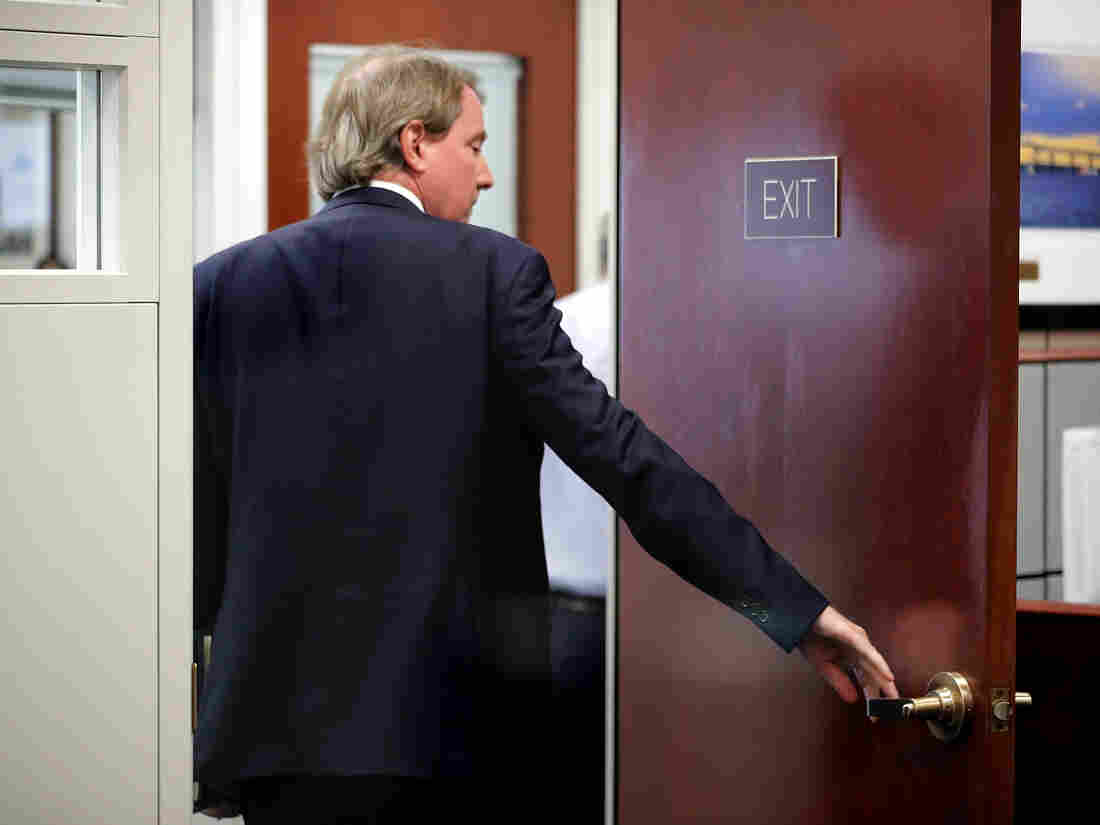 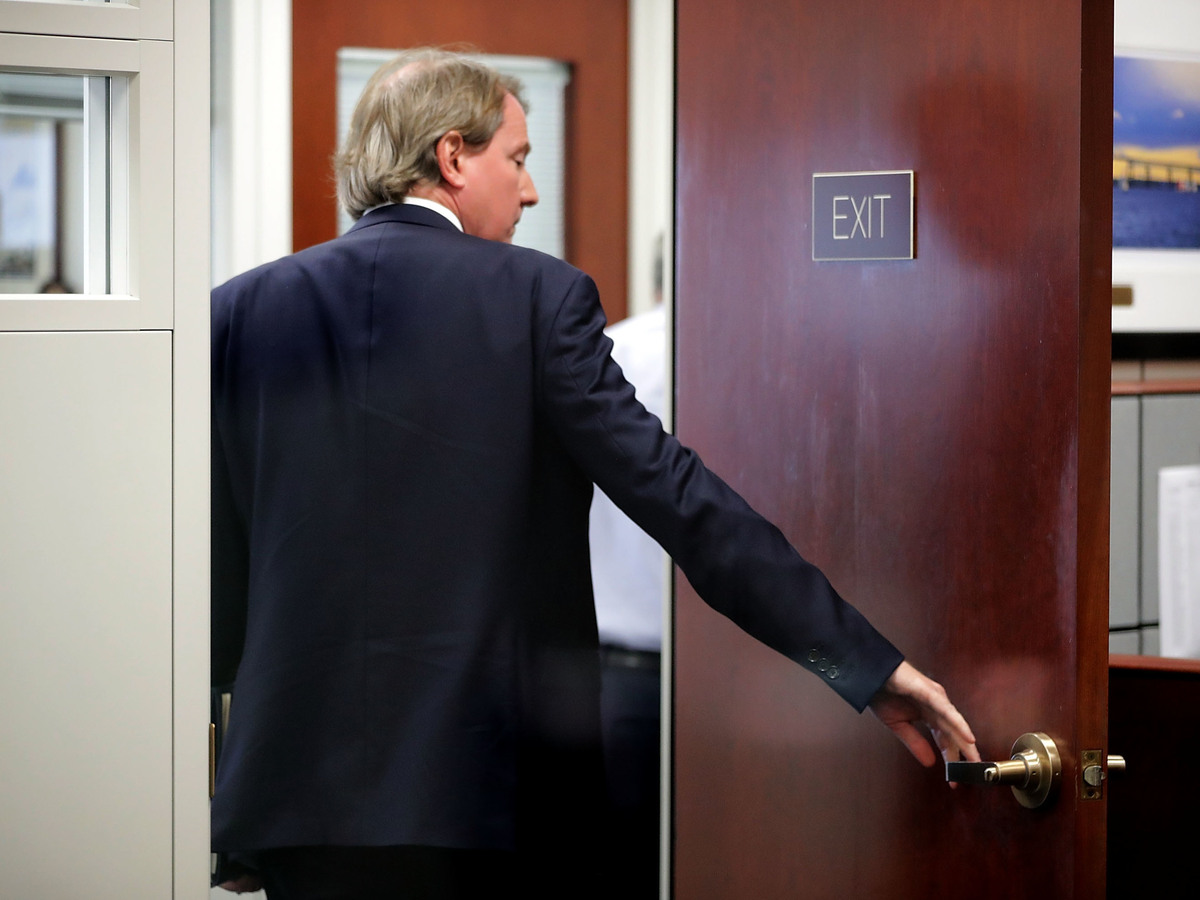 In a year of news tsunamis, this past week surpassed most. So you may not have noticed the quiet departure of a key player in President Trump's White House.

Donald McGahn II, the White House counsel, vacated his West Wing office without a news conference or a public send-off. But as counsel to the Trump campaign in 2016, general counsel for the transition and the only White House counsel since, the 50-year-old Washington insider has been integral to some historic proceedings.

Arguably no one has had more of an impact or done more to advance the Trump agenda. McGahn supervised the process that produced both Neil Gorsuch and Brett Kavanaugh, the two newest members of the U.S. Supreme Court. In addition, McGahn oversaw the vetting of a score of new judges on the powerful federal courts of appeal and more than twice that number at the federal trial court level.

Working with Senate Majority Leader Mitch McConnell and Judiciary Chairman Chuck Grassley, McGahn has seen these candidates through the process faster than anyone has witnessed in American history.

More than a few conservatives see this systematic restocking of the federal bench as the premier achievement of the Trump presidency to date. But if that were not enough, McGahn has also been credited with helping protect the chief executive from his own worst impulses in the early months of 2017.

After Trump fired FBI Director James Comey and Attorney General Jeff Sessions recused himself from the investigation into Russian election interference, McGahn is reported to have dissuaded the president from firing both Sessions and Robert Mueller, the independent counsel who had taken over the Russia probe.

Like many others in the current administration, McGahn had indicated an interest in limiting his own tenure to roughly two years. But the timetable was accelerated when Trump tweeted in mid-August that McGahn would be replaced right after Kavanaugh was confirmed.

When the Kavanaugh process was nearly derailed by allegations of sexual assault, McGahn played a big part in shaping the nominee's fight-back rebuttal. But now that the new justice has been sworn in, McGahn has quietly slipped away.

Having previously been a partner at the prestigious firm Jones Day's Washington office, McGahn could return there or consider offers from others. He is best known in government for his years on the Federal Election Commission, where as chairman he was known for his skeptical view of campaign finance regulation.

McGahn is also known to local music fans as lead guitarist for a band covering hits by Guns N' Roses, among others. Now 50, he had shoulder length hair until recent years and has a collection of guitars previously owned by famous rock musicians.

The president has appointed a replacement, Washington lawyer Pat Cipollone, who is less well known in political circles. Cipollone is still undergoing the weeks-long background check. In the interim, the job of running the counsel's office with its dozens of attorneys has fallen to Emmet Flood, who has been a special counsel to the president dealing with outside investigations. He is expected to return to that more specific assignment when Cipollone arrives.

Flood is not a stranger to the White House. He has done work for former Vice President Dick Cheney, President George W. Bush and President Bill Clinton (whom he served during the protracted controversy over impeachment).

Whether either Flood or Cipollone will play as prominent a role as McGahn is not known. But the Office of White House Counsel has often been something of an enigma in the past.

An office with a past

In the presidency of George W. Bush, the job was held first by a Texas ally of the president's, Alberto Gonzales. Bush would later promote Gonzales to attorney general, a job from which he resigned under a cloud of controversy that related to his serving a political agenda on civil liberties and voting rights that was set by the White House.

Gonzales's successor as White House counsel was Harriet Miers, another longtime Texas associate of the Bush family. Miers had been White House staff secretary (a job later held by Kavanaugh) and deputy chief of staff. Not long after Bush made her White House counsel, he nominated her for the Supreme Court. That nomination spurred opposition from conservatives as well as from Senate Democrats, however, and her name was withdrawn.

Clinton's White House counsels, six in all, were embroiled in varying degrees of controversy through his two terms, from the firing of the travel office staff in 1993 to the granting of pardons in the last lame-duck weeks of Clinton's presidency in 2001.

But it was a deputy White House counsel, Vince Foster, who prompted the most controversy and speculation. Foster was a Clinton friend from Arkansas whose death in a Virginia park just six months after Inauguration Day was ruled a suicide by several federal investigations, including by two special prosecutors.

But by far the most famous White House counsel since the office was created in 1943 was John Dean. He was named the counsel by President Richard Nixon in July 1970 and was in place when the events that led to the Watergate scandal began two years later.

Five men arrested inside the Democratic National Committee headquarters (located at the Watergate office complex) in June 1972 were found to have ties to Nixon's re-election committee. Later, the White House turned out to be involved in arranging "hush money" for the burglars and covering up the various connections.

In April 1973, Nixon had his chief of staff and top domestic advisor resign, and fired his attorney general. Dean, who had warned Nixon of a "cancer growing on the presidency," was fired the same day.

In the weeks that followed, Dean turned on the president and became the star witness in televised hearings before the Senate's special committee investigating the whole affair. He would later plead guilty to a felony for his part in the cover-up but serve only four months in custody in exchange for his testimony against other conspirators.

Dean's story has been recalled this year as it was learned McGahn had spent as much as 30 hours in interviews with members of Mueller's team. It was thought the key point of interest was the Comey firing, but this has not been revealed. And there is no indication McGahn was turning on President Trump or providing anything useful against him.

McGahn apparently sat for the interviews as part of a larger strategy by Trump's personal attorneys to cooperate with Mueller in 2017. It was hoped this would enable Mueller to wrap up his assignment within the year. Mueller did not finish, and the attorneys responsible for that approach, John Dowd and Ty Cobb, have since moved on.

Since then, attorneys both inside and outside the White House, including Flood, have seemed more inclined to challenge Mueller and his team.

By tradition, it has been presumed the answer is in the title. The White House counsel represents the institution and the office. But it can be difficult to separate the office from the officer, the job from the person in the job.

That particular ambiguity connects to a larger ambivalence Americans back to the Founding Fathers have felt about the high office of chief executive. With all its significance and grandeur, does it exist apart from the occupant?

For more than a century, the powers of the office of the presidency have seemed to increase. If that trend has been interrupted at times, the overall effect of elevation is hard to deny. Today, it is often hard to separate our concept of the nation from the personality occupying its highest office. For some, loyalty to the one requires loyalty to the other.