Accessibility links
In Hurricane Michael's Wake, Florida Panhandle Faces Steep Path Back To Normal More than a week after Hurricane Michael made landfall as a Category 4 storm, cities and towns are facing the daunting task of trying to rebuild. 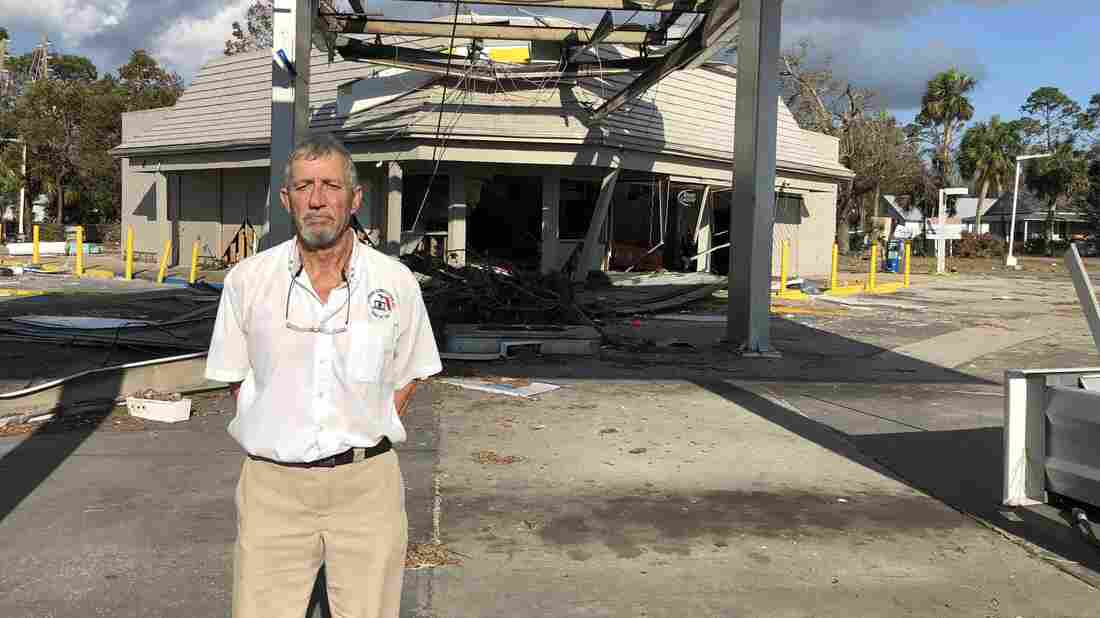 Port. St. Joe Mayor Bo Patterson stands in front of what's left of one of the towns two gas stations. Both were destroyed by Hurricane Michael, the fuel pumps torn from their concrete slabs. Debbie Elliott/NPR hide caption 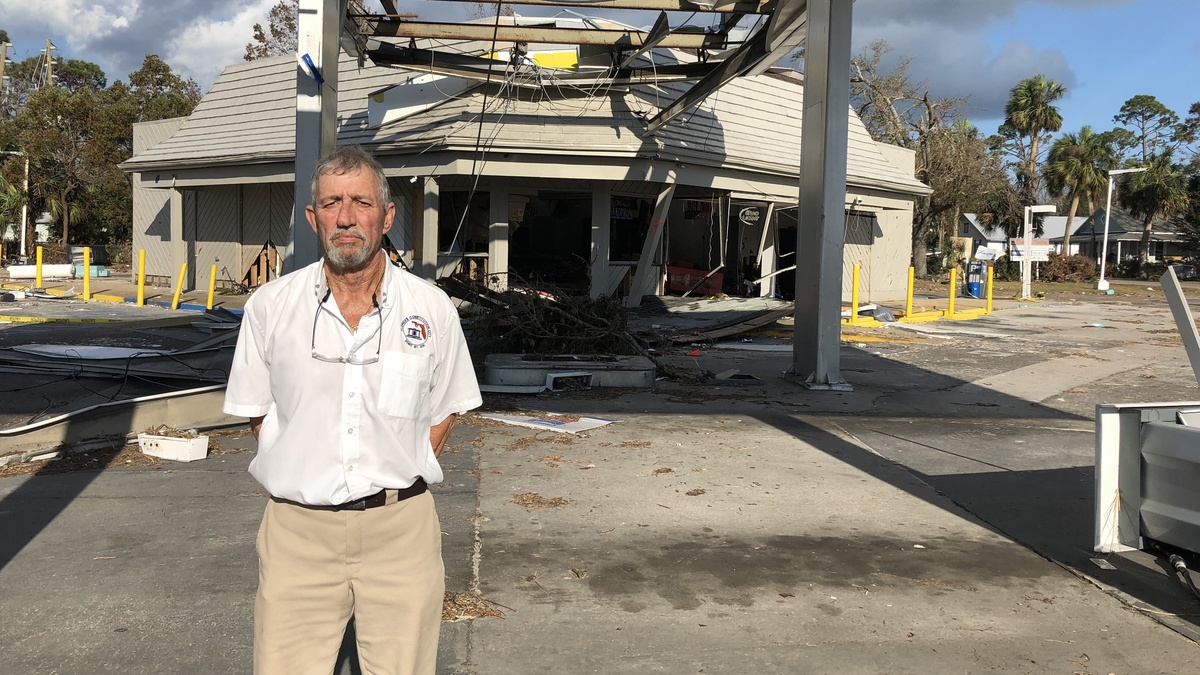 Port. St. Joe Mayor Bo Patterson stands in front of what's left of one of the towns two gas stations. Both were destroyed by Hurricane Michael, the fuel pumps torn from their concrete slabs.

More than a week after Hurricane Michael slammed into the Florida panhandle, cities and towns are facing the daunting task of trying to rebuild. The recovery is hampered by catastrophic damage not only to homes and businesses, but to vital infrastructure as well.

The small Gulf coast town of Port St. Joe, with a population of about 3,500 residents, is one of countless communities that was hit by the storm.

"Everywhere you turn and go you see some kind of destruction," says the town's mayor, Bo Patterson. "Whether it was wind damage, whether it was water, one of the two."

Patterson says Hurricane Michael pushed in a 13-foot storm surge that flooded the streets closest to St. Joseph Bay on the west side of Port St. Joe. The rest of town saw roofs ripped off, windows blown out and huge oak and pine trees toppled.

"Devastating, devastating," he repeats. "I don't know any other word to describe what you're seeing."

The roof is off at the local Baptist church; its steeple is bent over. The walls are gone from the Burger King. Port St. Joe's two gas stations are also destroyed — the fuel pumps torn from their concrete slabs.

The mayor says the city can't even start to think about recovery until it can clear all of the downed trees from local roadways. Backhoes have been brought in to help, and crews are working on most streets to replace power poles. 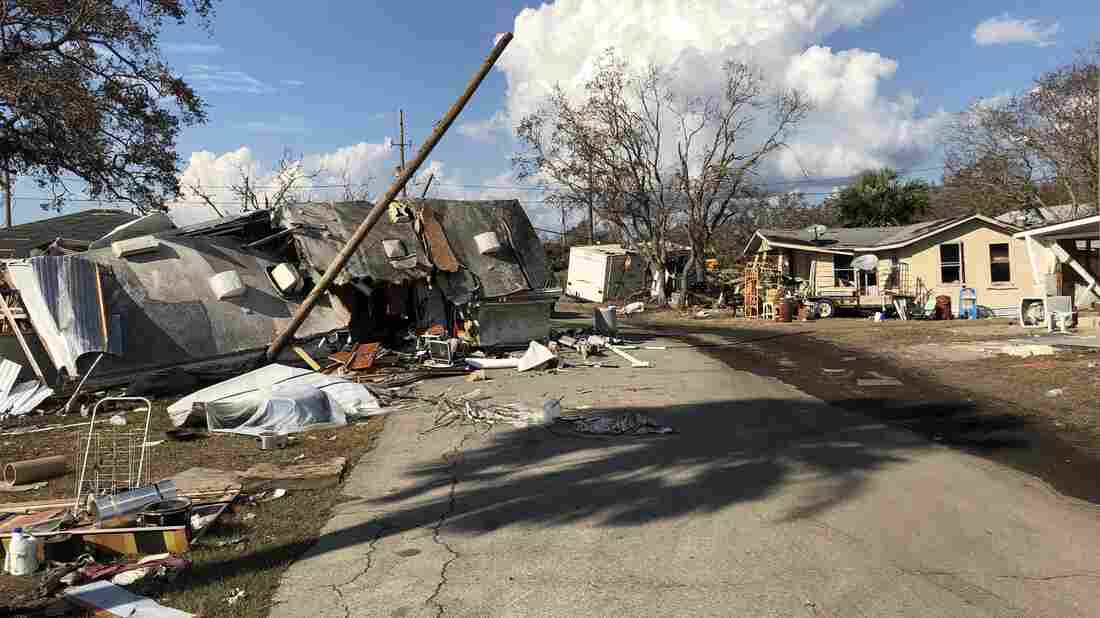 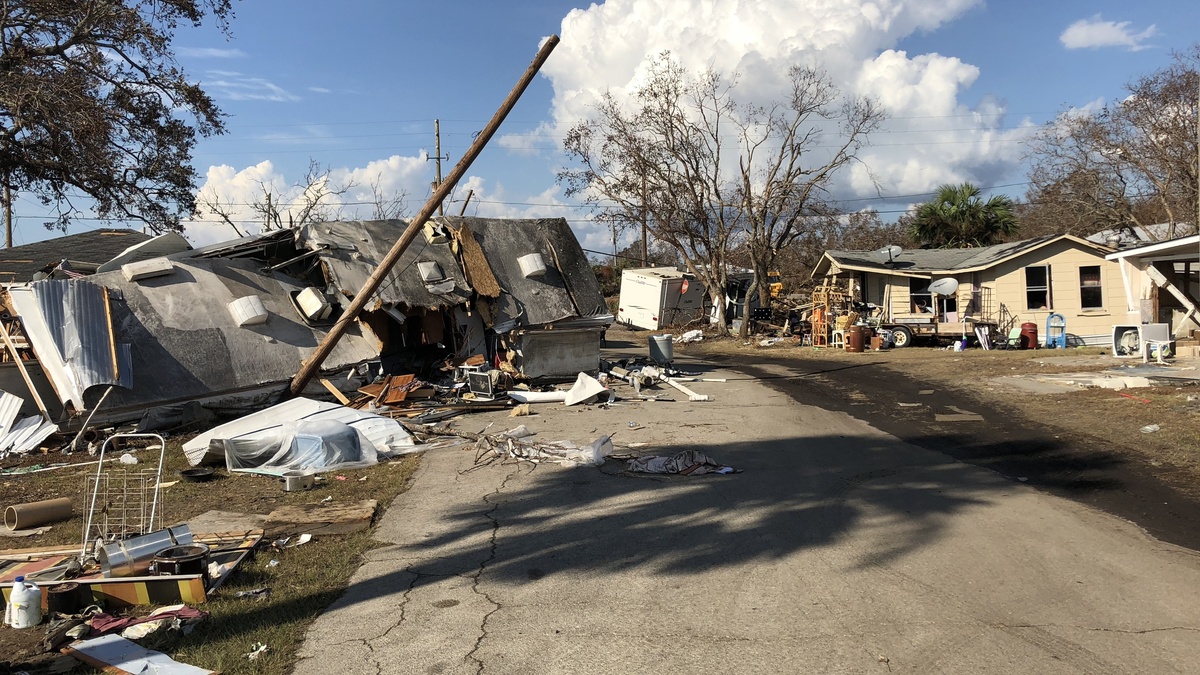 In the community of Highland View, just west of Port St. Joe, the storm surge from Hurricane Michael toppled houses and knocked mobile homes completely over.

Meanwhile, residents are trying to muck out soggy homes, and using chain saws to cut up downed trees.

"You hear that sound a lot," Patterson says of the buzz of chain saws. "Up until dark. You hear that all day long."

Couches, mattresses and piles of soaked clothing are stacked up curbside on residential streets.

"Just about every street you go down ... you'll see destruction like that," Patterson says. "People just — all they own is by the road to be thrown away."

At a flooded apartment near the bayfront, Alesha Smiley and her brother spent a recent afternoon moving soaked mattresses from the unit she shares with her grandmother, an elderly amputee in poor health.

"It is depressing," she says. "I try not to think about it too hard. But it's been a lot of people come in and helping."

Mayor Patterson says the city has been getting help from relief agencies and the state and federal government. He admits the town is at the mercy of outside assistance because its main source of revenue — tourism and water and sewer bills — has been decimated.

After Hurricane Michael, A Call For Stricter Building Codes In Florida's Panhandle

Driving through a neighborhood on the west side of town, Patterson does see signs of progress as he greets residents out cleaning up storm debris.

"I think most people in this area do have power, so that's good," Patterson says.

He stops at an old high school gym that's been converted into an emergency supply distribution point. Among those helping to coordinate the response from there is Port St. Joe city commissioner Eric Langston.

"We still have some things to look forward to," Langston says. "We're still here. We're still breathing. The worst has already happened as far as the hurricane. All we can do is look ahead and try to rebuild."

But Langston acknowledges it will be a long time before the town gets back to a sense of normalcy.

Back on the road, Mayor Bo Patterson points out the damage in the downtown business district. The roof is off his pest control business.

"It's unbelievable," he says.

He contemplates the rebuilding that's ahead.

"It's going to take years," Patterson says. "And I'm hoping the city can survive it."