Accessibility links
On College Campuses, Making Overdose Medication Readily Available College campuses are growing increasingly concerned about how to keep students safe amid a national opioid crisis. Some schools provide free and easy access to drugs that can reverse an overdose. 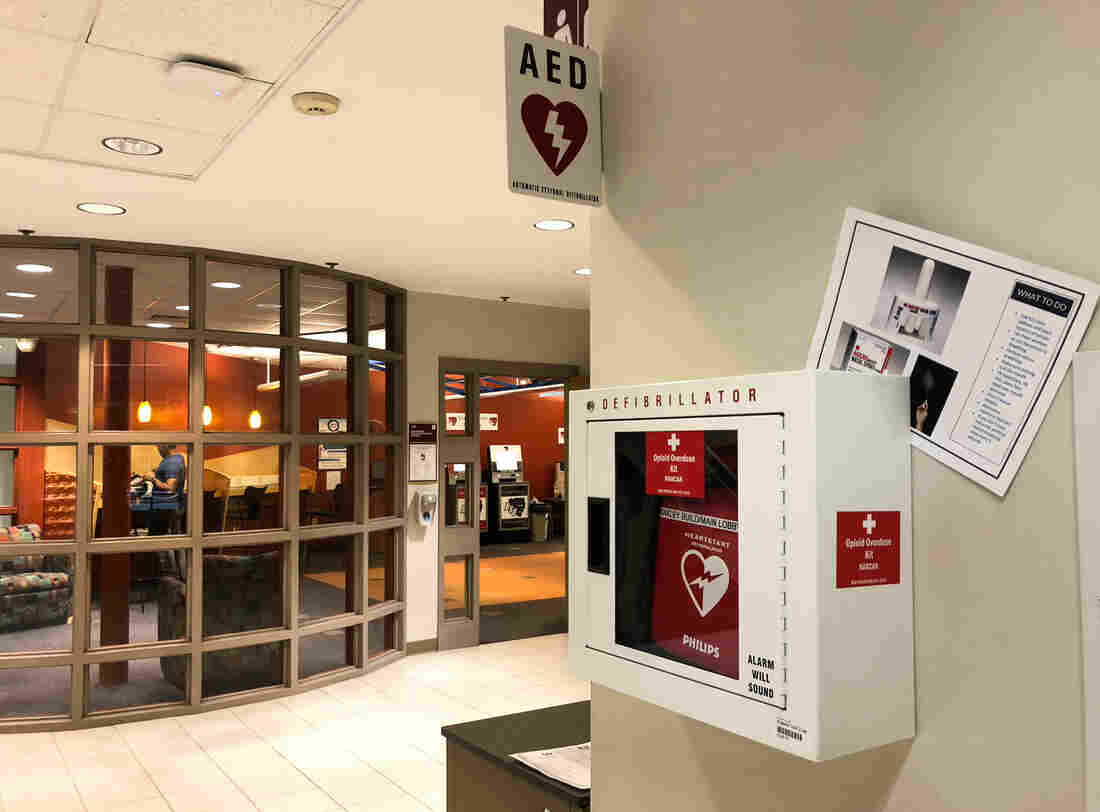 Some sixty "Opiod Overdose Kits" have been added defibrillator boxes in Bridgewater State University dorms and academic buildings like this one. Tovia Smith / NPR hide caption 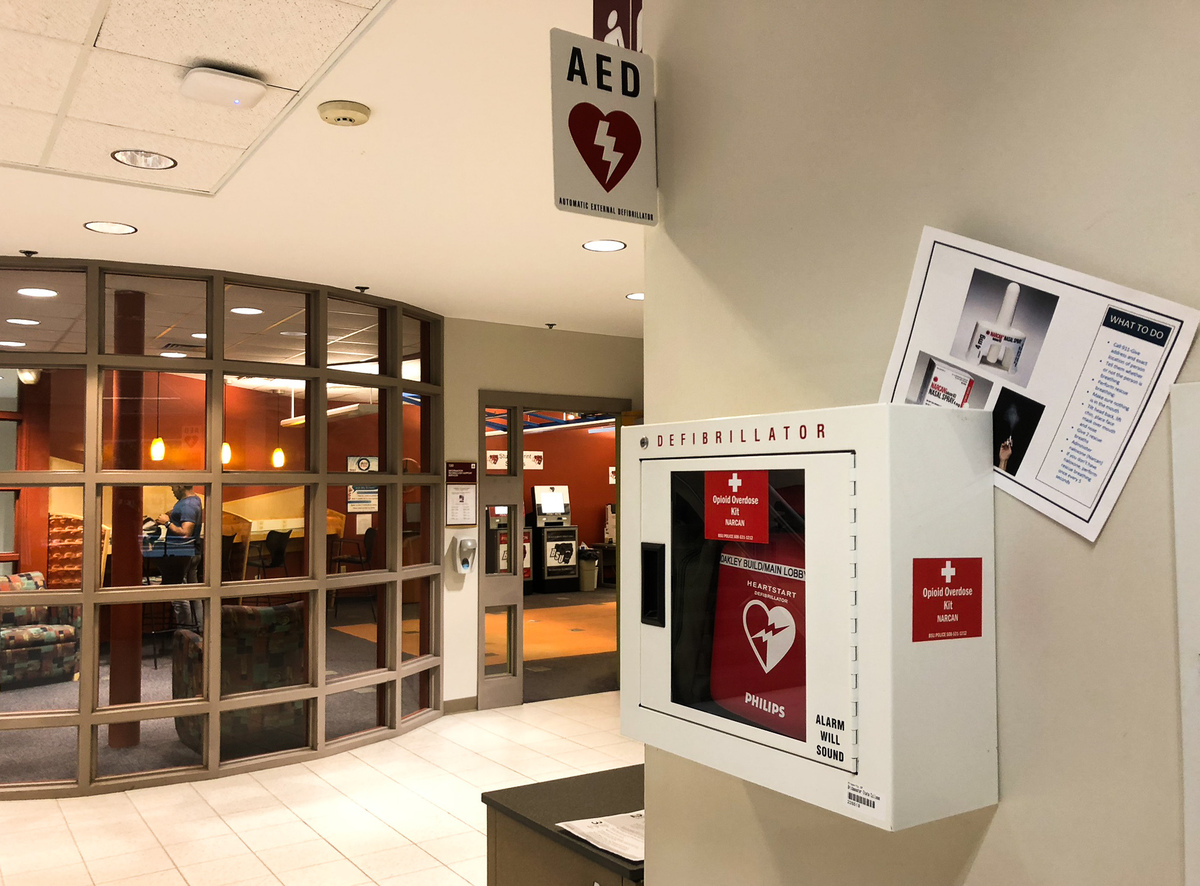 Some sixty "Opiod Overdose Kits" have been added defibrillator boxes in Bridgewater State University dorms and academic buildings like this one.

As the opioid epidemic has escalated around the nation, colleges and universities have been spared the brunt of it. Opioid addiction and overdoses are more rare on campuses than among young adults in the general population. But schools are not immune to the problem, and they're growing increasingly concerned about how to keep students safe.

One of the first things colleges have started to do is to beef up awareness and prevention programs. As part of freshman orientation, students routinely now get a quick primer on the dangers of opioids, how to recognize an overdose, and how to save someone from dying with a dose of Narcan, the drug known generically as Naloxone.

In recent years, many schools have started making Narcan available through health services, and campus police. Now, a small but growing number of schools are beginning to distribute the drug more broadly.

At Bridgewater State University, in southeastern Massachusetts, campus police Detective Sergeant Robert McEvoy points out the "Opioid Overdose Kit" --marked with bright red stickers hanging on the wall in the lobby of an academic building.

It's one of 60 kits that have been added to existing defibrillator boxes all over campus. More than a dozen more kits hang in their own boxes in all BSU parking lots and on all floors of a campus garage. They each contain two doses of Narcan nosespray, and they're all free for the taking.

"We felt it was on the university to provide these," says McEvoy, "because it's a life-saving drug and we're in the midst of epidemic that affects everybody."

BSU is located in what McEvoy calls the epicenter of the opioid crisis in Massachusetts. So he says kits were deliberately meant to be accessible to the public outside the BSU community as well. On campus McEvoy says he sees opioids "regularly." In 2016, he says a student fatally overdosed in a dorm. And earlier this year, he says, another student died from an overdose off campus.

But he says plans to distribute the Narcan around campus predate those overdoses. And since launching the project last fall, more than a thousand people have been trained to administer it.

"It's really simple," McEvoy says, demonstrating with a small bottle that looks like any nosespray you'd buy at the drugstore. "You just put the tip into the nostril, press the plunger, and that's it."

Happy to be at a school that offers help

Indeed, talking to random students on campus, it didn't take long to find some who've been through the training. 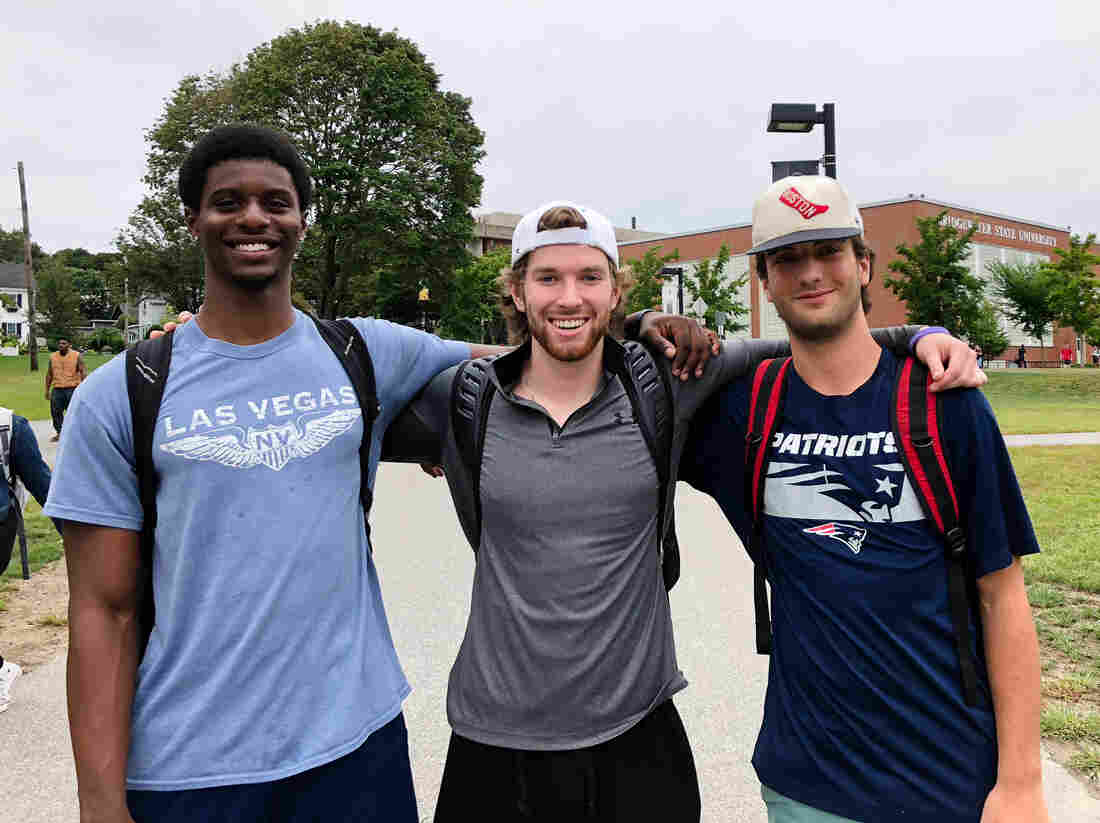 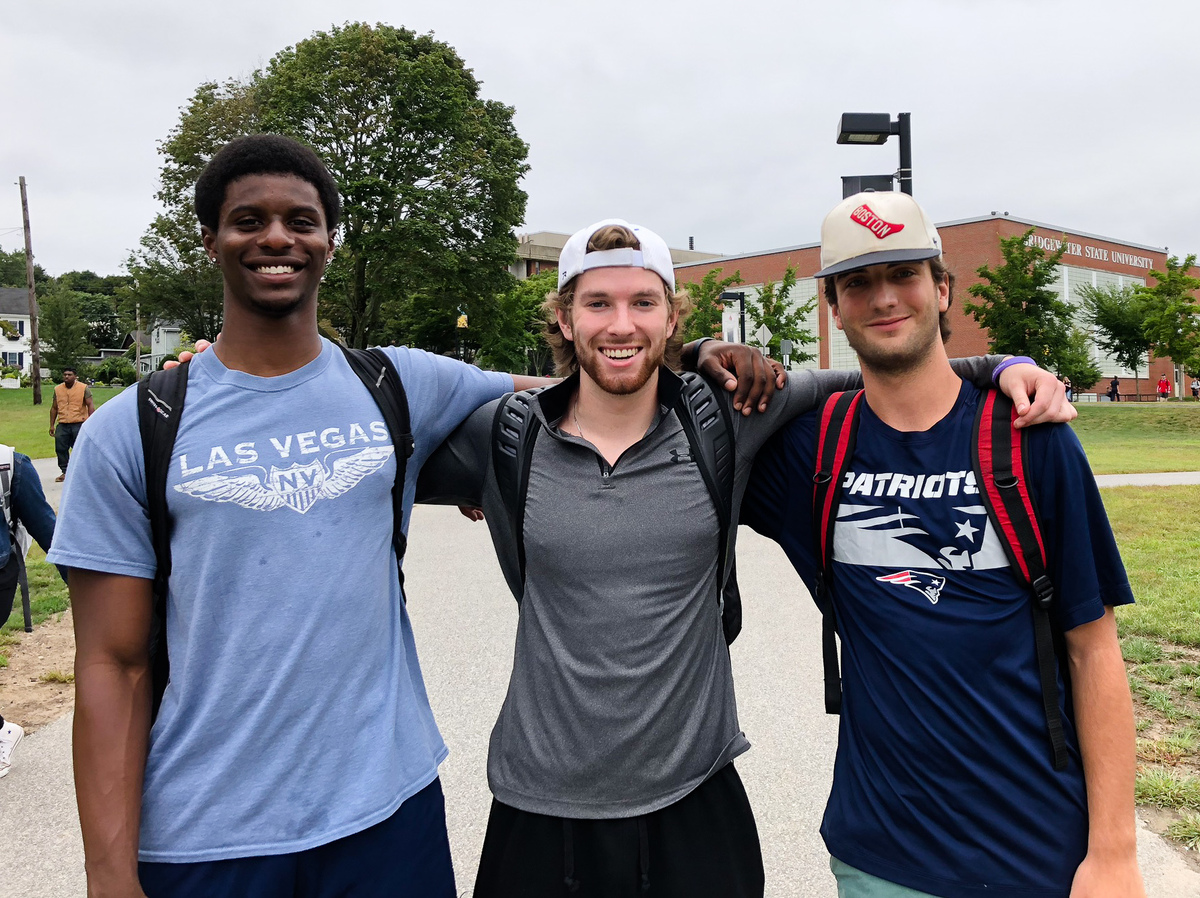 RAs are not required to administer the drug, but they are all trained and are encouraged to step in if necessary. "Personally, I feel it's my moral obligation to help someone who has overdosed. It could honestly save a life," says Roseman.

"I'm just happy to go to a school that has this," says sophomore Nick Vicente. "We're all human. If someone does something wrong, it's nice to know the school is looking out for students."

It's not just about the relatively small number of students who may be heroin users, Vicente says. But it's also important for the many who are using other street drugs like cocaine, which is sometimes laced with opioids like fentanyl, often unbeknownst to users.

"Honestly, I feel like a lot of kids are worried," says Vicente. "because that's when problems can definitely happen and then overdose can definitely be reality." 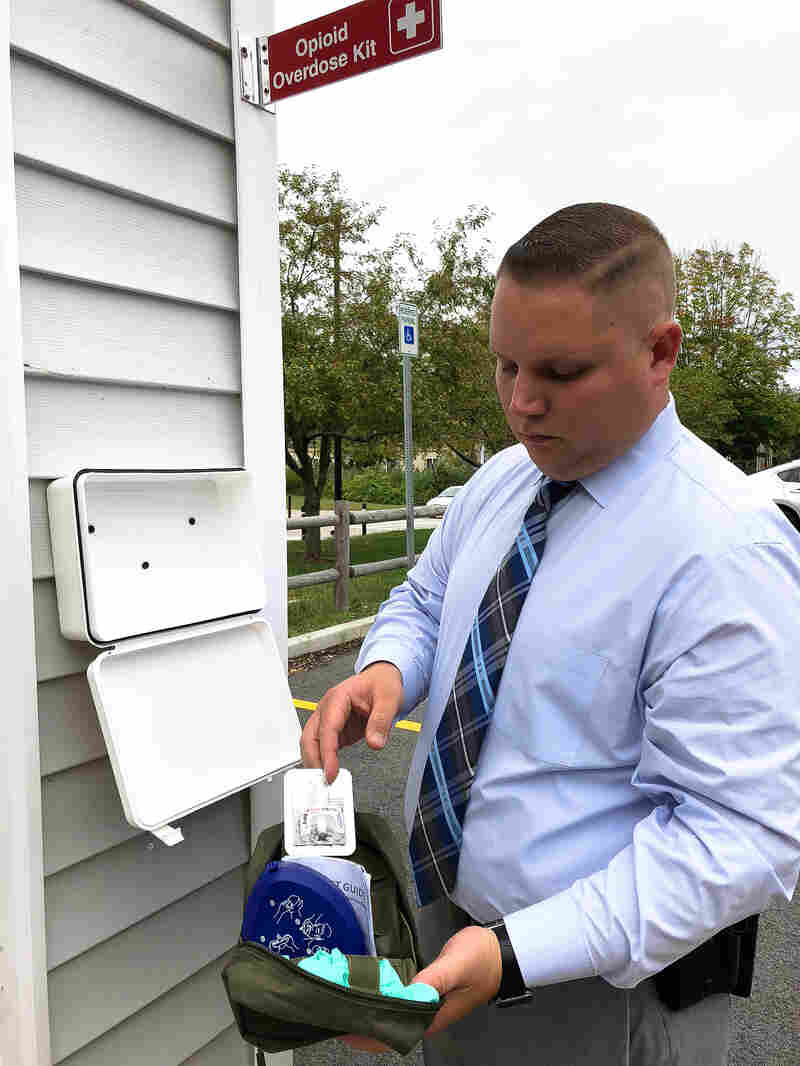 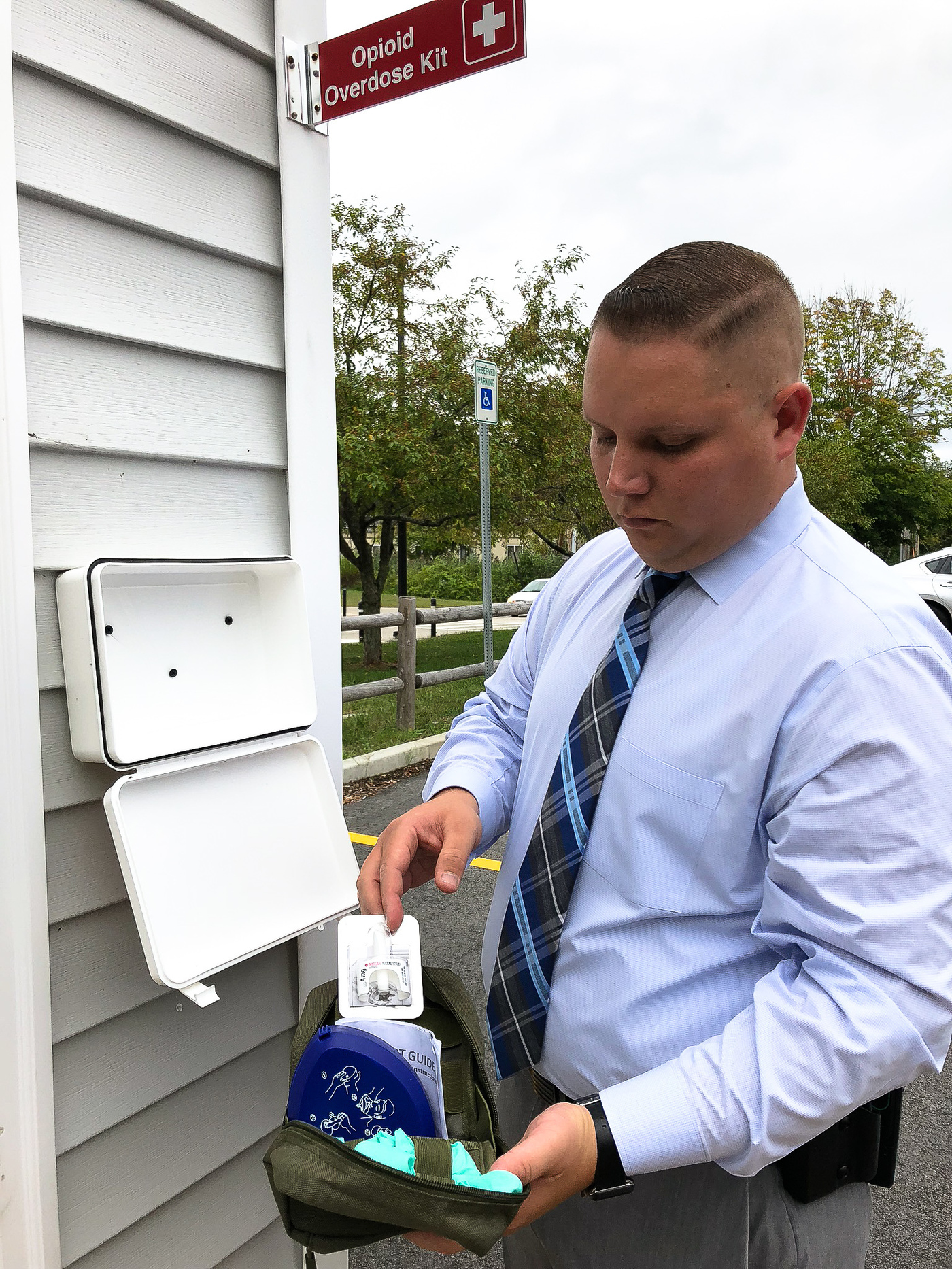 But others see it as a little more complicated.

"I think it's good to make Narcan available. But it's a really tricky situation," says another student from a different university, who says he spent about ten years battling addiction. He asked not to be identified to avoid harming future job prospects.

He says what started as drinking and smoking in high school, became a bad heroin habit through his college years. He dropped out and failed out multiple times, and overdosed twice. But he says that was before schools were set up to recognize or support students with drug addictions.

"I think they had their heads in the sand," he says. "They didn't want to acknowledge the problem. But I mean, it was probably blatantly obvious, honestly. I was pretty bad."

Now, one and a half years sober, he's enrolled in a new school, and works in a "campus recovery center," the likes of which barely existed even a few years ago.

His school has also just started giving free Narcan to students, but only if they ask for it.

He worries many users (or their friends) would be too afraid of letting campus authorities know who they are. "For me, it would be a fear of attracting attention and getting in trouble," he says.

But now on the other side, as the one trying to offer help to others, he also sees the downside to leaving Narcan out for people to just help themselves, anonymously.

"The con to that is that you have no way of offering them further help. The only way that we can help them, is if we know who it is," he says.

Parents need to step up

It's just one of many issues colleges need to grapple with as they work out best practices. But meantime, some say parents parents need to step in a play a larger role themselves.

"Unfortunately, colleges haven't really caught up with the opioid crisis, and I think parents need to take it into their own hands," says Jillian Bauer-Reese, Assistant Professor in the Department of Journalism at Temple University, where two students died of opioid overdoses last year.

Bauer-Reese says when kids leave for college, parents should send them off with a little care package, of Narcan, and fentanyl testing strips.

"It's time for parents to step up," she says. "Just like they would send [their kids] with condoms, to encourage them to have safer sex, they can create a safer drug use kit for them too. It's just something they can have if their plan was to try those drugs, to make that drug use safer."

Critics worry that might send kids the wrong message, and give them a false sense of security about using such dangerous drugs, and might even encourage more drug use. But Bauer-Reese dismisses such concerns.

"I don't think that if your student was planning on staying home on Friday night, studying for their exam, that having fentanyl strips in their drawer is going to be calling their name to go out and buy drugs, and try them," she says.

Is it worth the investment?

A separate question is whether such of broad-based strategies — distributing Narcan to everyone indiscriminately - are worth the investment, especially for schools with scarce resources.

Narcan costs upwards of 40 dollars a dose, and emergency kits are usually stocked with two, just in case.

At Bridgewater State University, none of the kits put out last year have been taken yet.

And in the two years since the University Of Texas at Austin launched a similar initiative, several kits placed off campus have been successfully used, but all those placed on campus remain untouched, according to Lucas Hill, a clinical assistant professor at UT's College of Pharmacy and the Director of Operation Naloxone.

"This is at least one data point that says [placing kits all around campus] may be not be cost effective," he says. "Maybe on-campus is not the hot spot."

But, he cautions, naloxone alone is not the answer. Colleges also need to beef up treatment and recovery programs. Preventing an overdose death, he says, is not the same thing as curing addiction.