Accessibility links
Thousands Of Swedes Are Inserting Microchips Under Their Skin Proponents of the chips say they're safe and largely protected from hacking, but one scientist is raising privacy concerns around the kind of personal health data that might be stored on the devices. 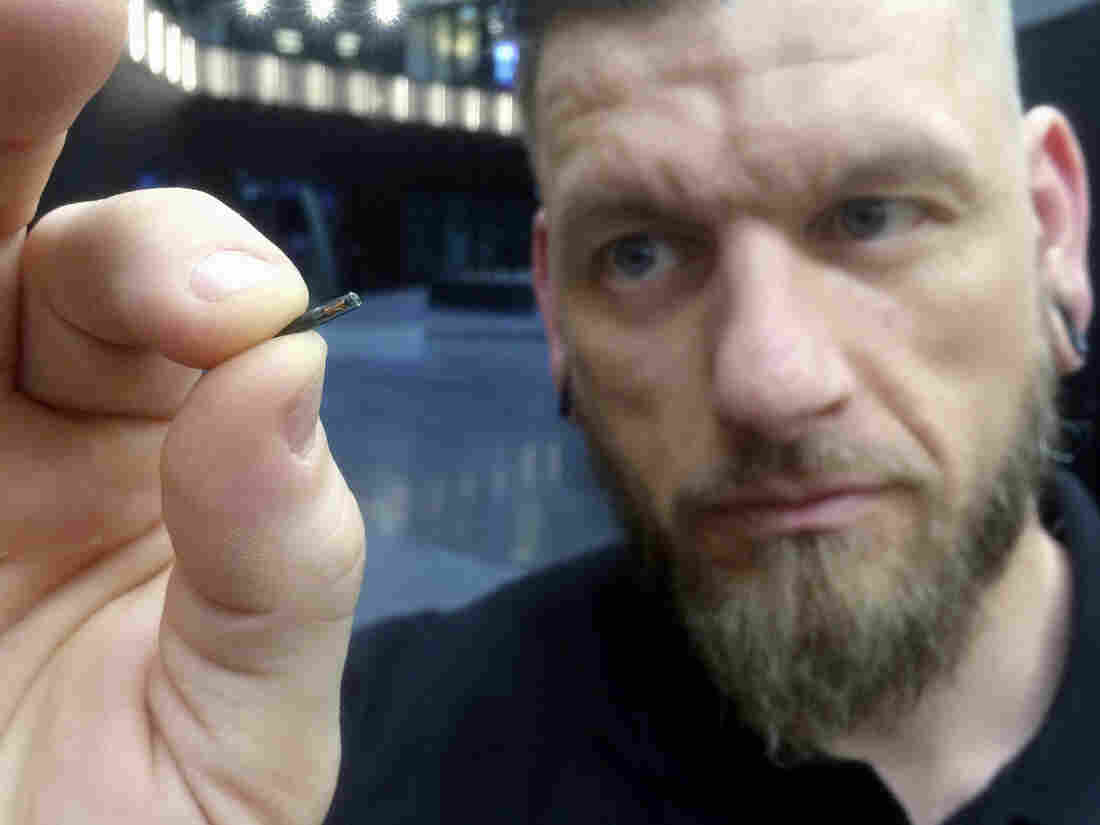 Jowan Osterlund holds a microchip implant in Stockholm in 2017. His company, Biohax International, is a leading provider of the devices in Sweden. James Brooks/AP hide caption 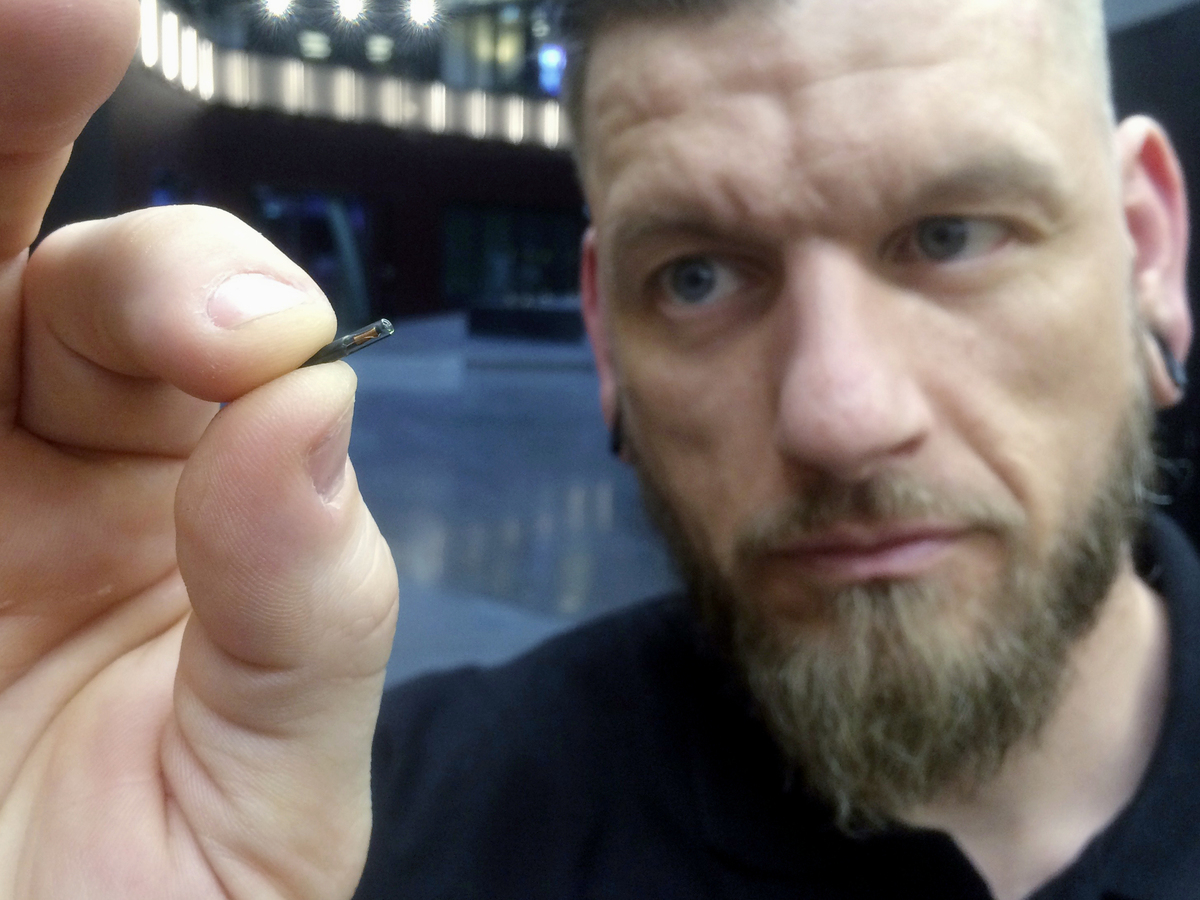 Jowan Osterlund holds a microchip implant in Stockholm in 2017. His company, Biohax International, is a leading provider of the devices in Sweden.

Technology continues to get closer and closer to our bodies, from the phones in our pockets to the smartwatches on our wrists. Now, for some people, it's getting under their skin.

In Sweden, a country rich with technological advancement, thousands have had microchips inserted into their hands.

The chips are designed to speed up users' daily routines and make their lives more convenient — accessing their homes, offices and gyms is as easy as swiping their hands against digital readers.

They also can be used to store emergency contact details, social media profiles or e-tickets for events and rail journeys within Sweden.

Wisconsin Company Offers To Implant Chips In Its Employees

Proponents of the tiny chips say they're safe and largely protected from hacking, but one scientist is raising privacy concerns around the kind of personal health data that might be stored on the devices.

Around the size of a grain of rice, the chips typically are inserted into the skin just above each user's thumb, using a syringe similar to that used for giving vaccinations. The procedure costs about $180.

So many Swedes are lining up to get the microchips that the country's main chipping company says it can't keep up with the number of requests.

More than 4,000 Swedes have adopted the technology, with one company, Biohax International, dominating the market. The chipping firm was started five years ago by Jowan Osterlund, a former professional body piercer.

After spending the past two years working full time on the project, he is currently developing training materials so he can hire Swedish doctors and nurses to help take on some of his heavy workload.

"Having different cards and tokens verifying your identity to a bunch of different systems just doesn't make sense," he says. "Using a chip means that the hyper-connected surroundings that you live in every day can be streamlined." 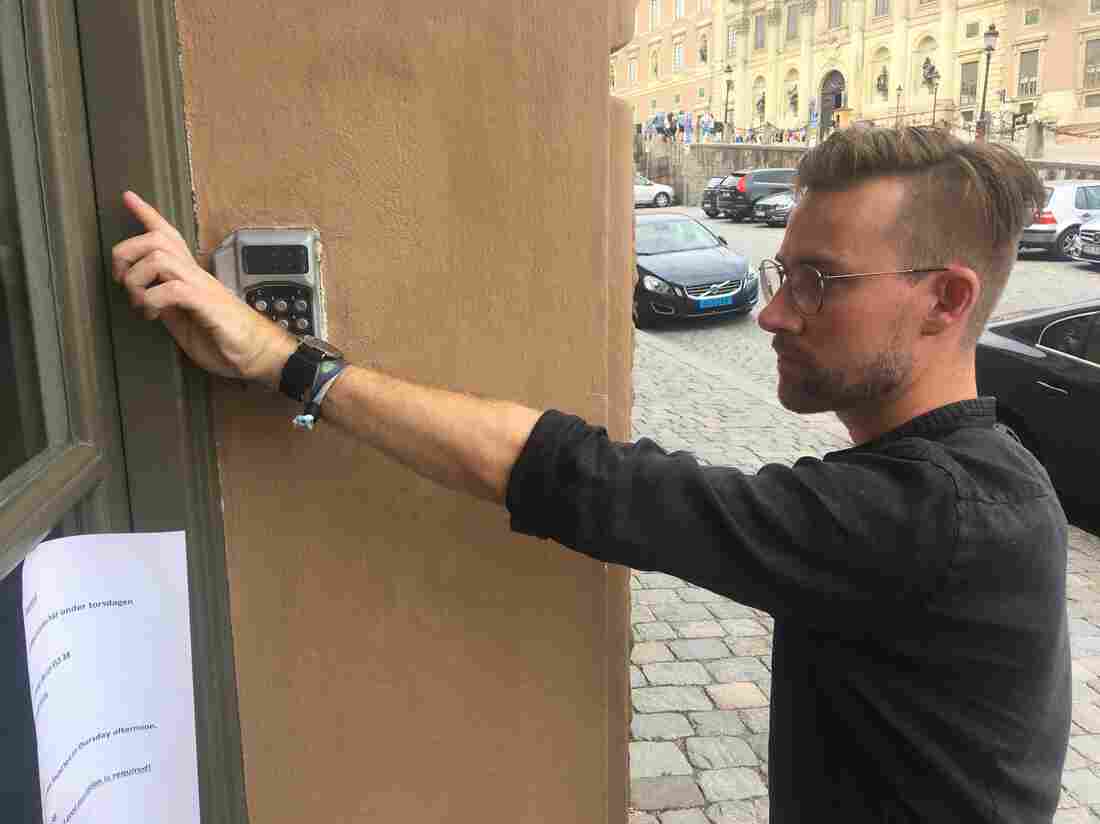 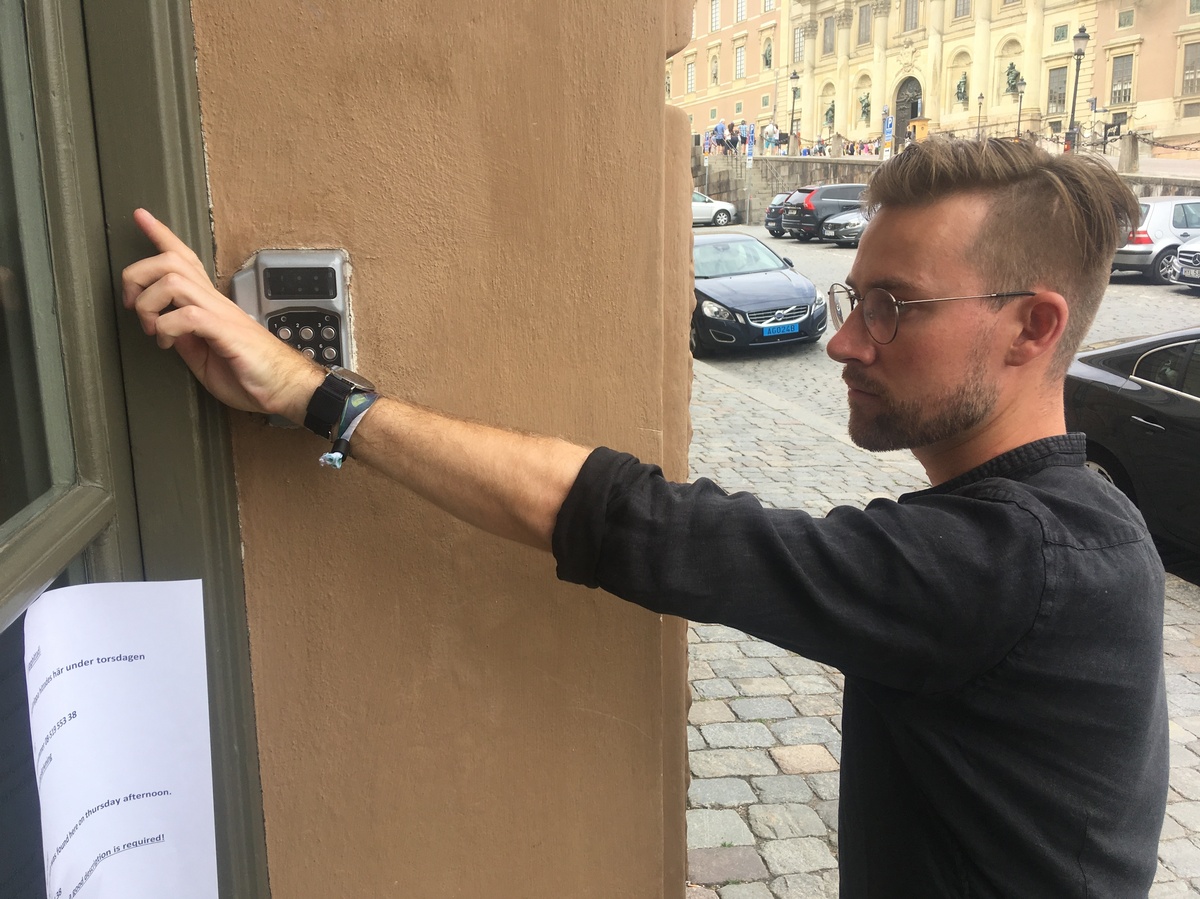 Erik Frisk, a Web developer and designer, uses his implanted chip to unlock his office door in Stockholm.

Many early adopters come from Stockholm's thriving startup scene. Erik Frisk, a 30-year-old Web developer and designer, says he was really curious about the technology as soon as he heard about it and decided to get his own chip in 2014.

"It's just completely passive, it has no energy source or anything. So when you tap it against a reader, the chip sends back an ID that tells the reader which chip it is," he explains.

"Swedes are very pragmatic and the chip is useful ... and since a lot of people know each other in the tech community — it's very tight — [the trend has] been spreading and people have seen the benefits," Frisk says.

When Frisk moved into a shared house earlier this year, he organized a chipping party for his new housemates. Now they can access the 16th century building they share in Stockholm's Old Town by tapping their hands on a digital reader by the door.

"The chip basically solves my problems," says Szilvia Varszegi, 28, who also uses it to get into her coworking space.

And she uses it to share her LinkedIn details at networking events, avoiding the need to spell out her name. She simply touches another attendee's smartphone and the information is transferred. "When another phone reads the chip, they see the [link] and they can open it in the phone browser," Varszegi explains.

Sweden's largest train company has started allowing commuters to use chips instead of tickets, and there's talk that the chips could soon be used to make payments in shops and restaurants.

"I see no problem for [it] becoming mainstream. I think it's something that can seriously make people's lives better," Varszegi says.

Osterlund believes there are two key reasons microchips have taken off in Sweden. First, the country has a long history of embracing new technologies before many others and is quickly moving toward becoming a cashless society.

In the 1990s, the Swedish government invested in providing fast Internet services for its citizens and gave tax breaks to companies that provided their workers with home computers. And well-known tech names such as Skype and Spotify have Swedish roots.

Only 1 in 4 people living in Sweden uses cash at least once a week. And, according to the country's central bank, the Riksbank, the proportion of retail cash transactions has dropped from around 40 percent in 2010 to about 15 percent today.

Osterlund's second theory is that Swedes are less concerned about data privacy than people in other countries, thanks to a high level of trust for Swedish companies, banks, large organizations and government institutions.

Swedes are used to sharing personal information, with many online purchases and administrative bodies requiring their social security numbers. Mobile phone numbers are widely available in online search databases, and people can easily look up each other's salaries by calling the tax authority. 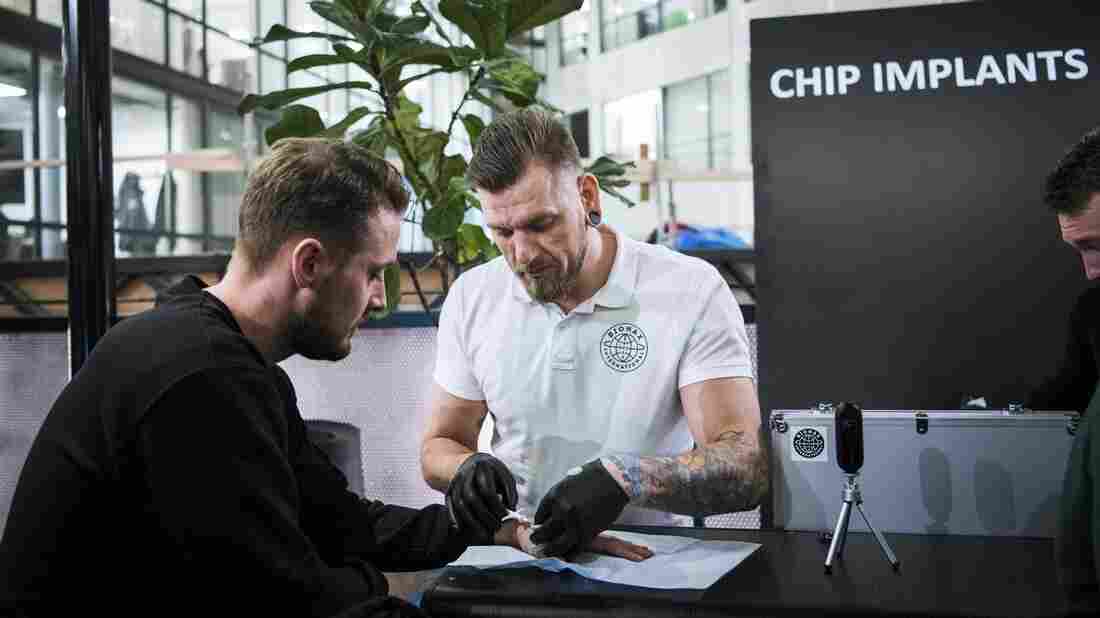 Osterlund implants a chip into a man in Stockholm. More than 4,000 Swedes have adopted the technology. Jonathan Nackstrand/AFP/Getty Images hide caption 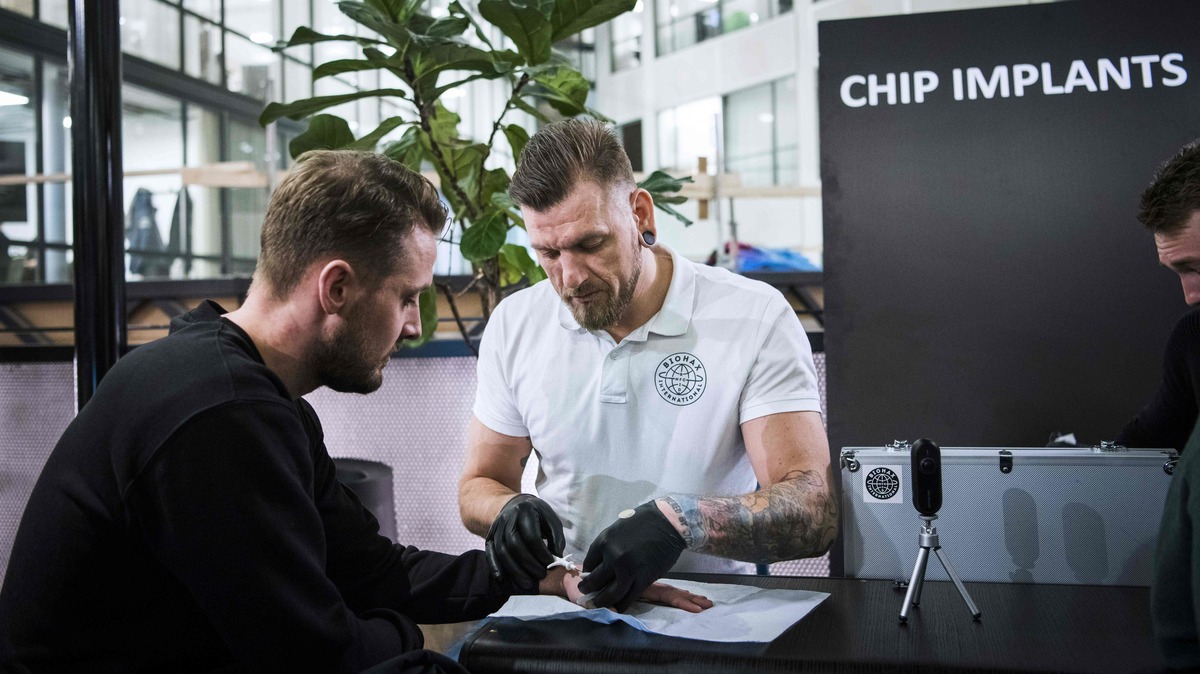 Osterlund implants a chip into a man in Stockholm. More than 4,000 Swedes have adopted the technology.

Osterlund says personal microchips are actually more difficult to hack than many other data sources because they are stored beneath the skin.

"Everything is hackable. But the reason to hack them will never be bigger because it's a microchip. It's harder for someone to get to, since you put it in you," he says.

There are few vocal critics of Sweden's microchip trend, and there is currently no national legislation regulating the growing industry.

However, Ben Libberton, a British scientist based in southern Sweden, is among those starting to campaign for lawmakers to keep a closer eye on developments.

"What is happening now is relatively safe. But if it's used everywhere, if every time you want to do something and instead of using a card you use your chip, it could be very, very easy to let go of [personal] information," he says.

Libberton, a trained microbiologist now working in science communication, says one of his main concerns is how the chips could be used to share data about our physical health and bodily functions.

"Because it's implanted in your body, when more health-related information starts being used and incorporated into the chip and being transmitted — that could create an extra layer of privacy that we really need to look at and take care of before it's widely used," he says.

Despite these concerns, there seems to be no letup in the trend. One coworking space and innovation hub in Stockholm is holding a large implant party this month where a tech startup, DSruptive, is promising to reveal "the next generation consumer-level implant." The device will include 2KB of memory — double that of earlier implants — a range of new functions and an LED light designed to improve privacy by blinking if someone tries to read or access an implant.

Osterlund says the tougher data-privacy rules that came into effect across the European Union earlier this year, as part of the General Data Protection Regulation, could also help the microchip trend spread more rapidly.

"It's the heaviest set of laws protecting individual integrity ever," he says of the rules, which affect any organization handling personal information linked to EU residents.

But Osterlund says the fact that this kind of regulation does not exist on a global level could delay the microchip trend elsewhere.

"I have a hard time seeing the rest of the world following GDPR anytime soon. But at least all of Europe — I mean one continent — it's a good beginning," he says.