Accessibility links
'Pleasant' Doesn't Interest Melissa McCarthy: 'Who Wants To Watch That?' McCarthy likes to take on "three-dimensional, flawed" characters. Otherwise, she says, "there's nothing to sink your teeth into." She stars as a caustic literary forger in Can You Ever Forgive Me? 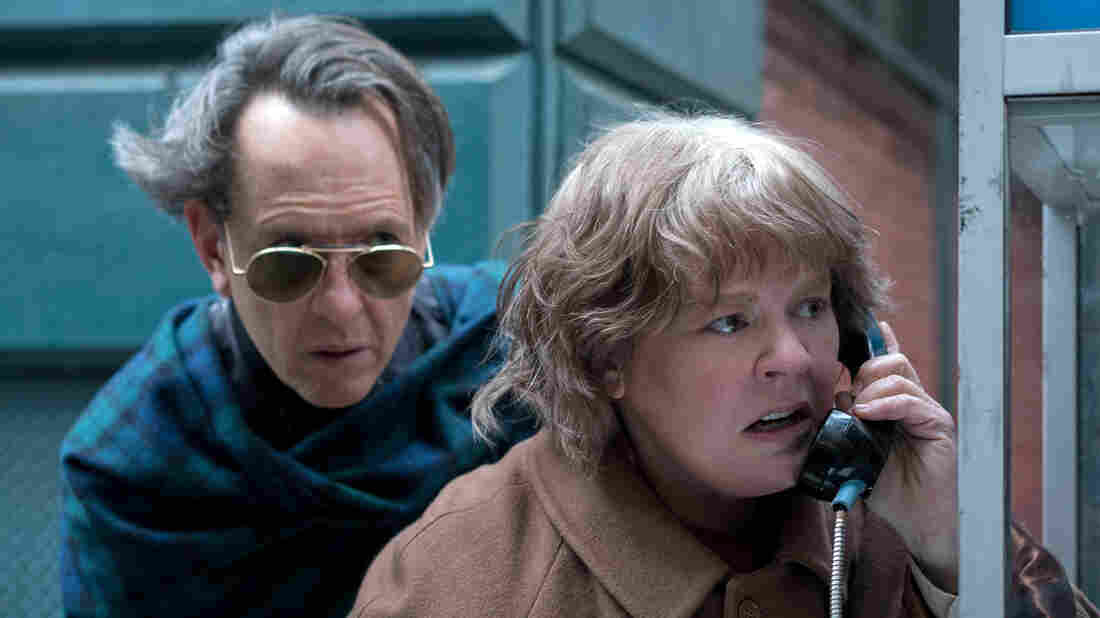 Melissa McCarthy stars with Richard E. Grant in Can You Ever Forgive Me? -- a film about literary forger Lee Israel. Mary Cybulski/Twentieth Century Fox hide caption 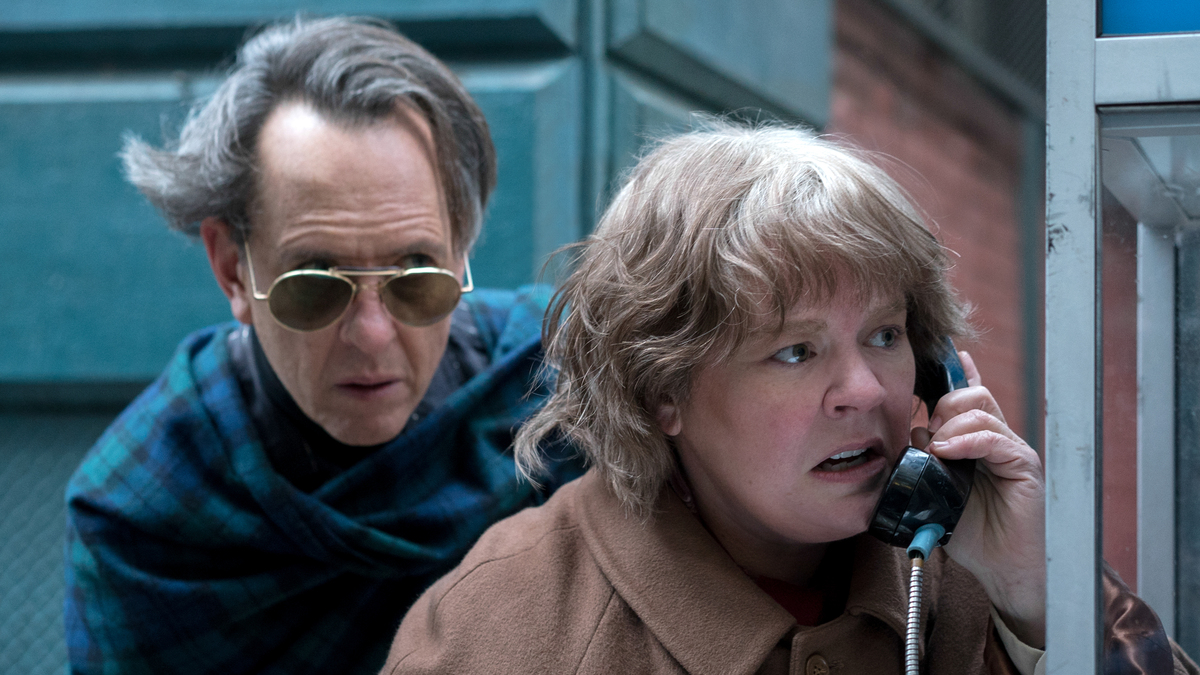 Melissa McCarthy stars with Richard E. Grant in Can You Ever Forgive Me? -- a film about literary forger Lee Israel.

Melissa McCarthy is not interested in playing pleasant characters — flawless women with perfect clothes and relationships. "Who wants to watch that?" she asks. "There's nothing to sink your teeth into. ... The people I love and like are filled with quirks and eccentricities. ... We're a bundle of all these different weirdnesses."

Instead, McCarthy became known for her comic roles in movies like Bridesmaids and The Heat — and for her impersonation of President Trump's first press secretary, Sean Spicer, on SNL.

More recently, McCarthy's taken a turn into drama, playing the misanthropic writer and literary forger Lee Israel in the new film, Can You Ever Forgive Me? Israel, who died in 2014, was famously caustic — and complex.

McCarthy embraces the opportunity to bring these characters to life on screen — as an actor, writer and producer: "I don't think a day goes by where I don't realize how lucky I am," she says — taking on the challenge of portraying these "three-dimensional, flawed ... really real women."

On how she got a sense of Lee Israel's character

True to Lee's personality, there is not a lot of her personal life to get to take a look at. And also it's before everyone felt the need to document, you know, every single moment of their lives.

I was lucky enough, though, that two of our producers ... had known her for 20 years. [David Yarnell] had a very big part in kind of poking and prodding [Lee] to even write the memoir [also called Can You Ever Forgive Me?], which he says she was very difficult about; again, true to Lee's kind of caustic, prickly nature, she didn't want to write about herself. She didn't like the idea of it and finally did, which worked out well for her.

Anne Carey, another one of our producers, knew her for 10 years. So I really sat and listened to their stories and listened to how difficult — yet, to me, always so witty and kind of fascinating — she was. So I got a lot of the character from that and then the rest, you know, [I] kind of conjured and created. 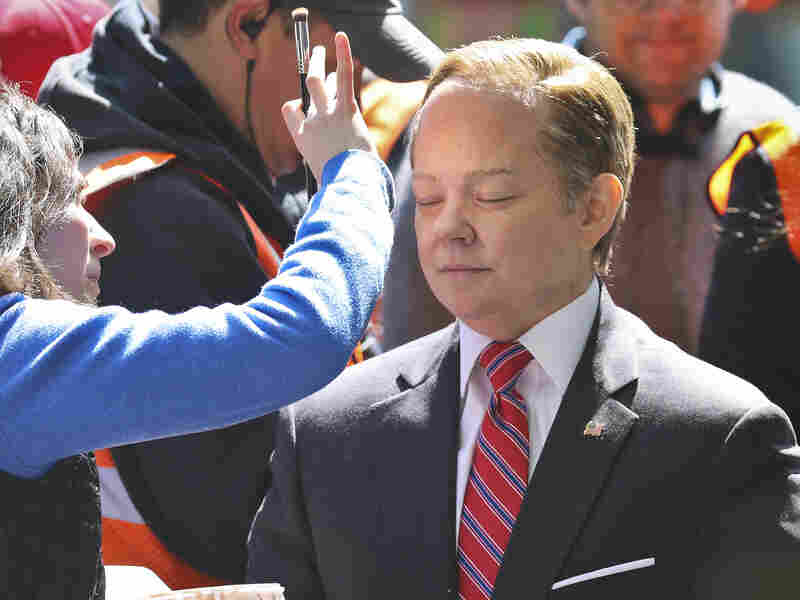 McCarthy initially balked at playing White House spokesman Sean Spicer on SNL. I was like, "What the what? I can't play him. I don't do impersonations." Bebeto Matthews/AP hide caption 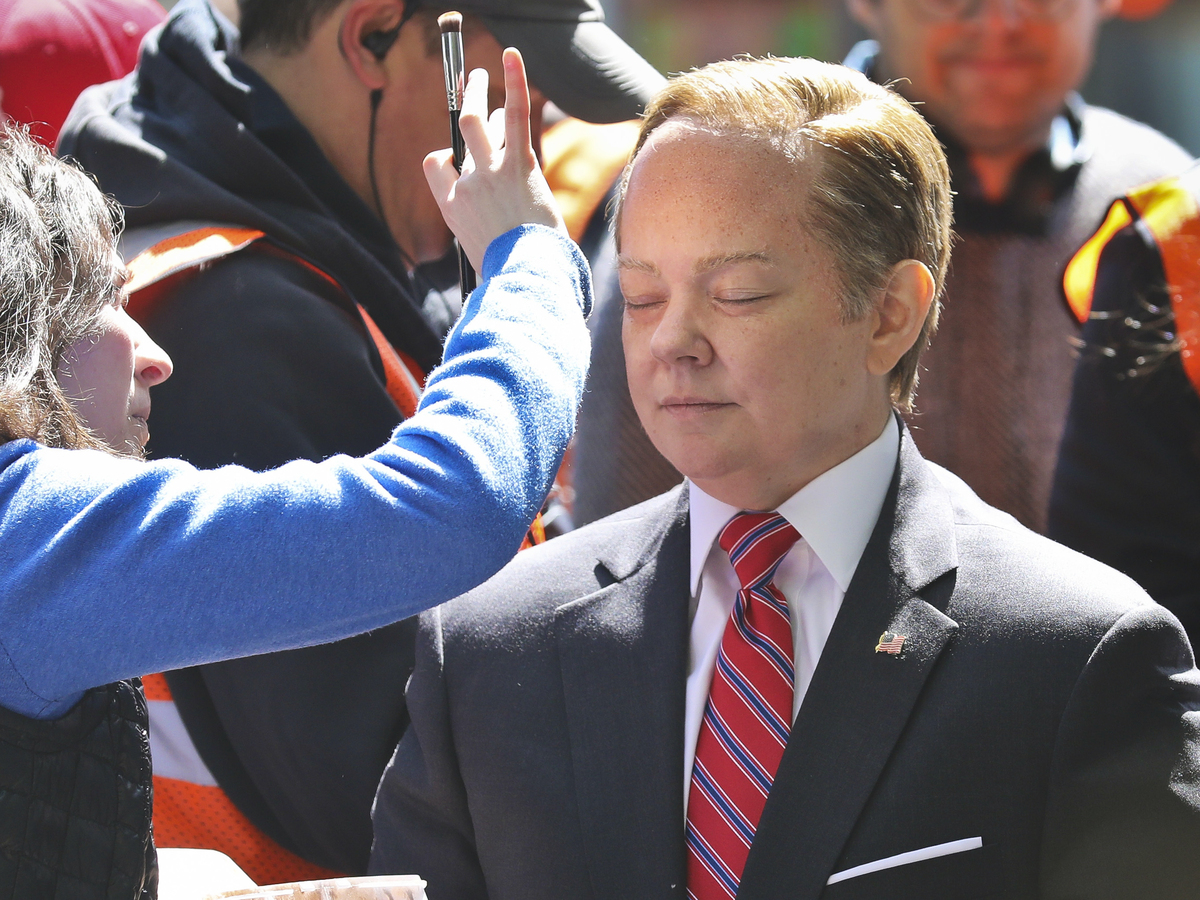 McCarthy initially balked at playing White House spokesman Sean Spicer on SNL. I was like, "What the what? I can't play him. I don't do impersonations."

I would never, ever have thought of that in a million years. My friend Kent Sublette, one of the head writers at SNL ... he called and said, "Would you ever come in and do Spicer? I wrote something that I think you can play." And I was like, "What the what? I can't play him. I don't do impersonations. I'm not a man. I have no interest. It's not in my wheelhouse." ...

Then I believe the next day, I saw another rather insane press conference [with Spicer], where I thought, "Well this is weirder than anything I could actually do. We can't even match it on SNL. It's so absurd. ... OK, I'm going to come in and read it and talk to you guys about it."

The real humbling blow was I thought, Well, how long is it going to take? Like can we even get me to look like him? And the really lovely special effects guy there just said, "Oh yeah, that's not going be hard at all. That'll take like a half an hour."

On the infamous food poisoning scene in Bridesmaids, in which McCarthy's character and her fellow bridesmaids become ill in a bridal boutique

The intention was never ever to be like, "Let's do this gross thing and let's make it gross." It was more for us to study in the worst thing in the world is happening to you. ... What is the embarrassment level and what is the shame level?

I'm not one for bathroom humor or stuff like that. I think sometimes there's that horrible and wonderful feeling you get where you're so embarrassed for the character, and I think that's showing the character kind of going through such a vulnerable humiliation that we can all laugh at it, because in some way we've all done it: We've all fallen, said the wrong thing, had some shaming thing done, and I think at least for myself, that was the connection, too. That's a real human experience even if that particular action hasn't happened to most people.

I think the treatment of women just can't be dismissed. You can't treat half the population so poorly and have it be like, "You know — boys!" There has to be repercussions, and it's happening in all fields, which is what I think is so important about #MeToo; it's branching out to everyone and to all women that need help, that need money for representation. It's saying that we're all in it together and I think the more we link up and realize there's strength in numbers, it can't be for the worse.