Accessibility links
China To Open Mega-Bridge And Tunnel: 34 Miles Across The Water Drivers on what's being called the world's longest sea bridge will have the experience of seeming to plunge underwater in two spots, where artificial islands house openings for a four-mile tunnel. 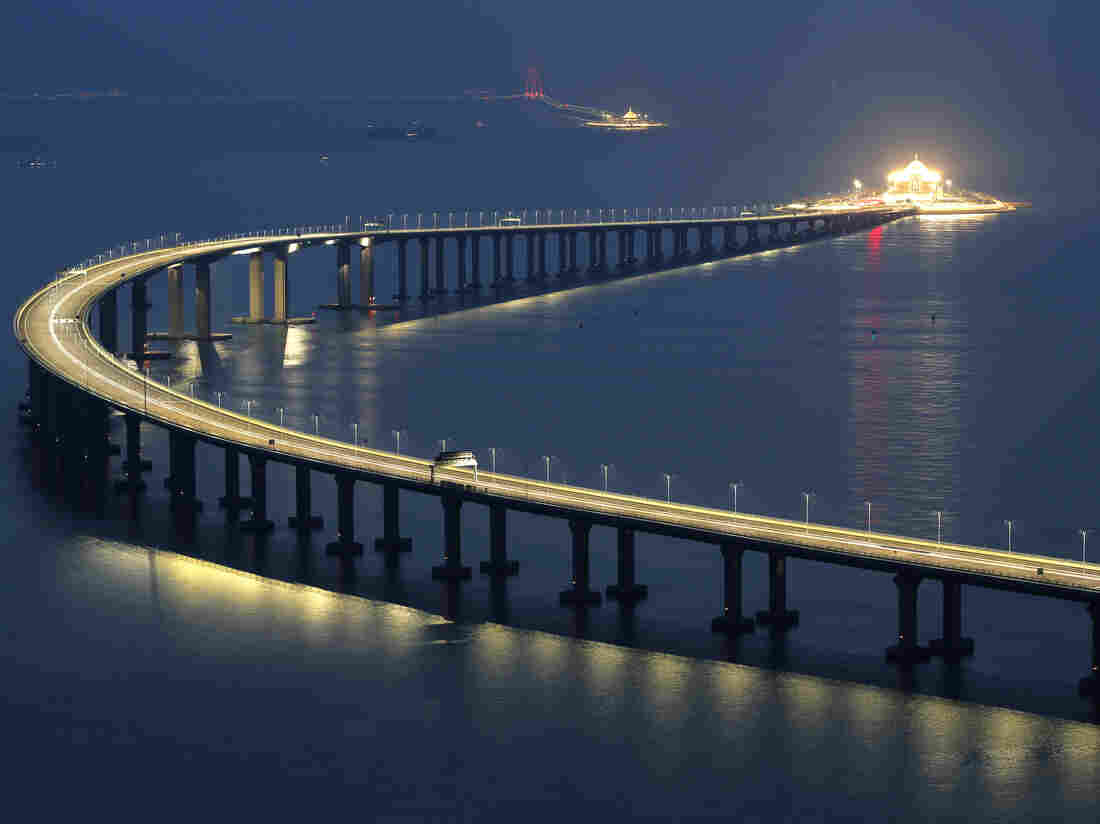 The Hong Kong-Zhuhai-Macau Bridge was lit up in Hong Kong on Monday, days before opening for public use. Called the world's longest cross-sea project, the bridge and tunnel extends for 34 miles. Kin Cheung/AP hide caption 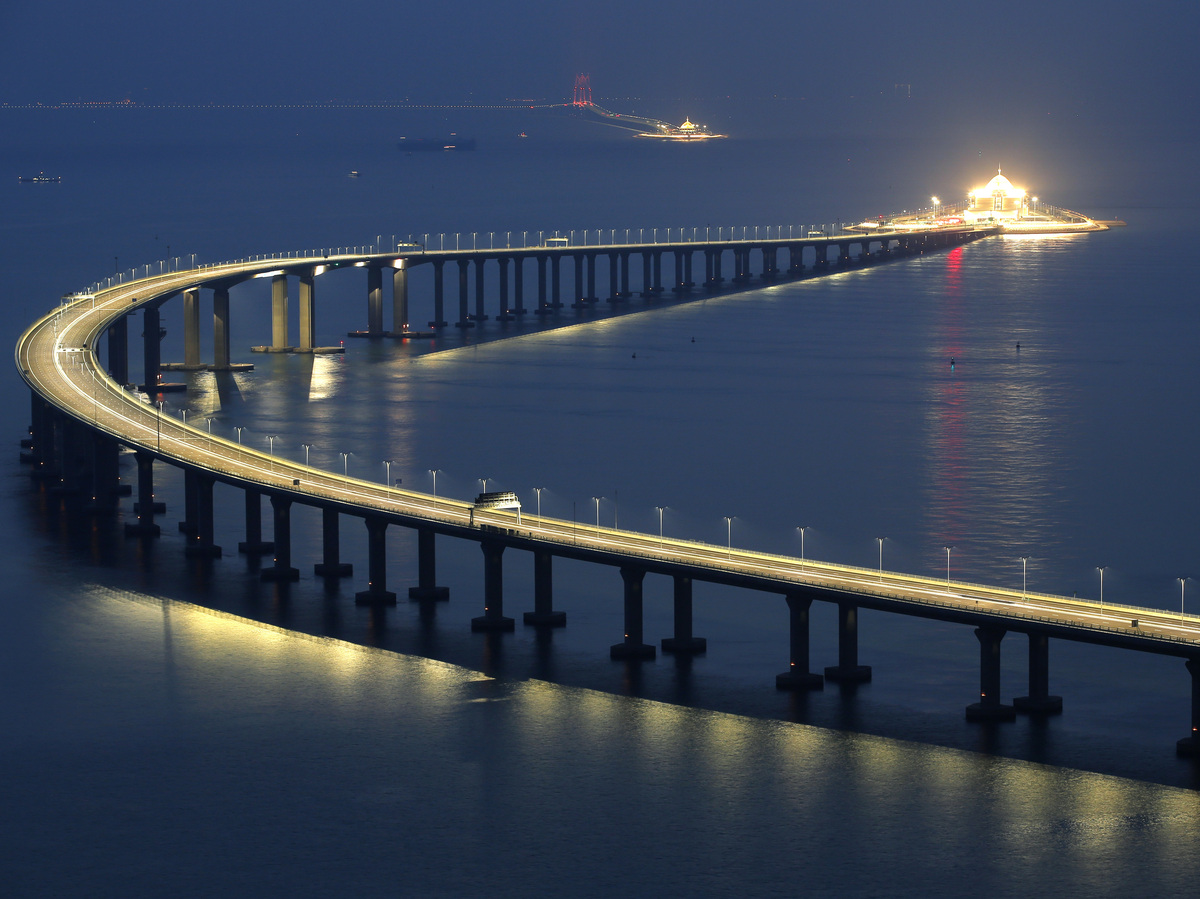 The Hong Kong-Zhuhai-Macau Bridge was lit up in Hong Kong on Monday, days before opening for public use. Called the world's longest cross-sea project, the bridge and tunnel extends for 34 miles.

A new bridge in southern China will shave more than two hours off the trip from Hong Kong to Zhuhai on the mainland. The result of nearly nine years of construction, the Hong Kong-Zhuhai-Macau Bridge project even includes a tunnel in its 34 miles across the Pearl River Delta.

When it officially opens on Wednesday morning local time, the bridge will carry six lanes of traffic — and drivers will have the novel experience of seeming to plunge underwater in two spots, where artificial islands were created to house openings for a four-mile tunnel.

It's being called the world's longest sea bridge. Estimates of its final cost range as high as $20 billion.

Construction on the project started in December 2009; since then, it has repeatedly hit delays, accidents and budget overruns. Deadlines for the bridge's opening were put off in both 2016 and 2017.

The bridge is being welcomed as a way to avoid hours of traffic along the coast of what's known as the Greater Bay Area. And its planners hope the new connection boosts economic ties in a region that includes Hong Kong, Macau and cities in Guangdong Province.

China's Xinhua news agency says the area is "home to more people than the entire U.K., has three of the biggest container ports in the world, and a larger GDP than Australia."

That economic activity and infrastructure is the main reason the project's designers opted to take the roadway underwater. They were looking to solve two important complications.

"Part of the bridge crosses two of Guangzhou Port's shipping lanes," said Li Jiang, a HKZM Bridge Authority project manager, according to Xinhua. "If we were to build a bridge above these lanes, it would have to be very wide and tall."

But those shipping lanes also pass next to Hong Kong International Airport — and the bridge's height could have posed a safety threat in that area. Officials also pledged to be careful to protect Chinese white dolphins that live in the delta. 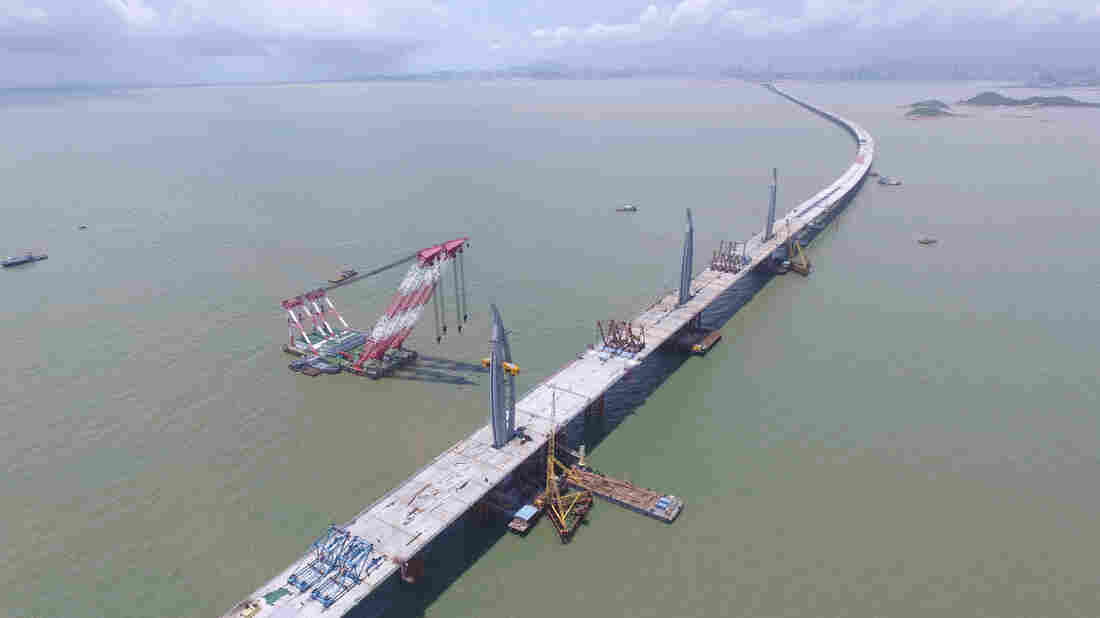 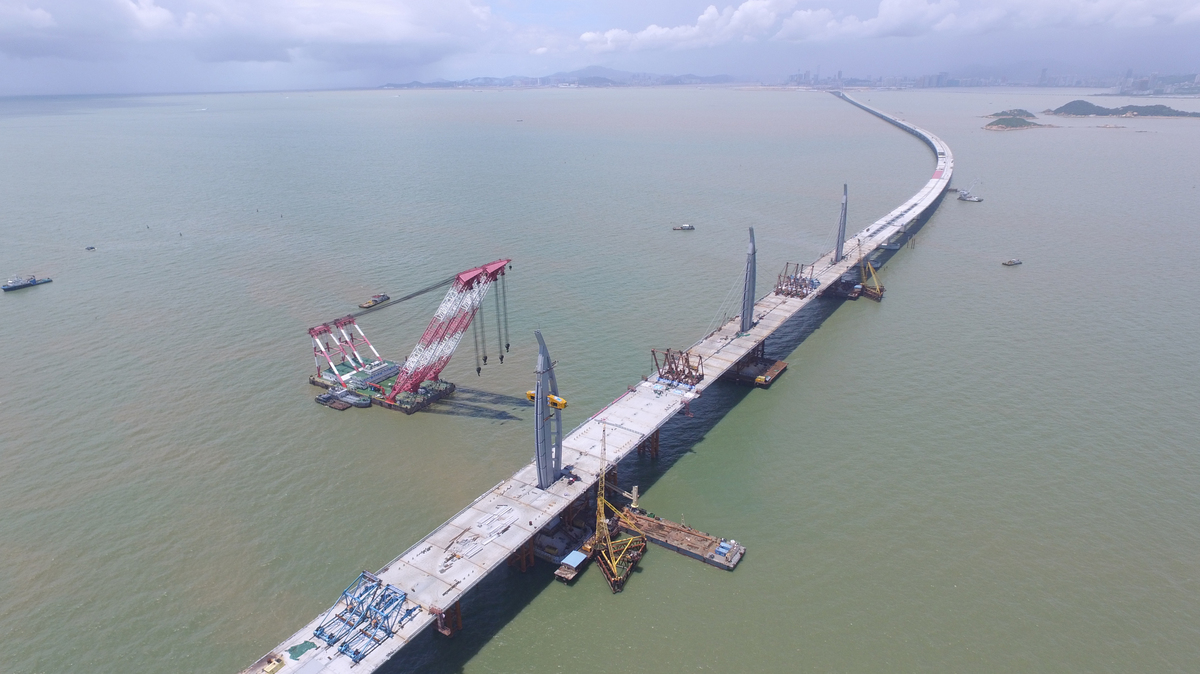 An aerial view shows construction of the Hong Kong-Zhuhai-Macau Bridge in June 2016 in Zhuhai in China's Guangdong Province.

Along with the structure itself, the bridge has introduced a number of border complications, as it connects Hong Kong and Macau — which are autonomous special administrative regions — with the Chinese mainland city of Zhuhai.

To use the bridge, private cars will need special permits that have been tightly controlled, the South China Morning Post says. The newspaper also reports that toll prices for vehicles using the bridge will range from 60 yuan (about $8.50) to 300 yuan (about $43).

Chinese media outlets are reporting that the bridge is built to last more than a century.

While there seems to be genuine excitement about the bridge from shipping and transportation companies, people in Hong Kong have mixed feelings about it. Many have questions about how useful the bridge will be, and there are concerns that China's central government might use the bridge as another way to chip away at Hong Kong's independence, as CityLab reports.