Accessibility links
Costco Builds Nebraska Supply Chain For Its $5 Rotisserie Chickens Costco is building a facility in Nebraska to process chickens from hundreds of nearby farms for sale as rotisserie chickens. The warehouse retailer sells 60 million rotisserie chickens each year. 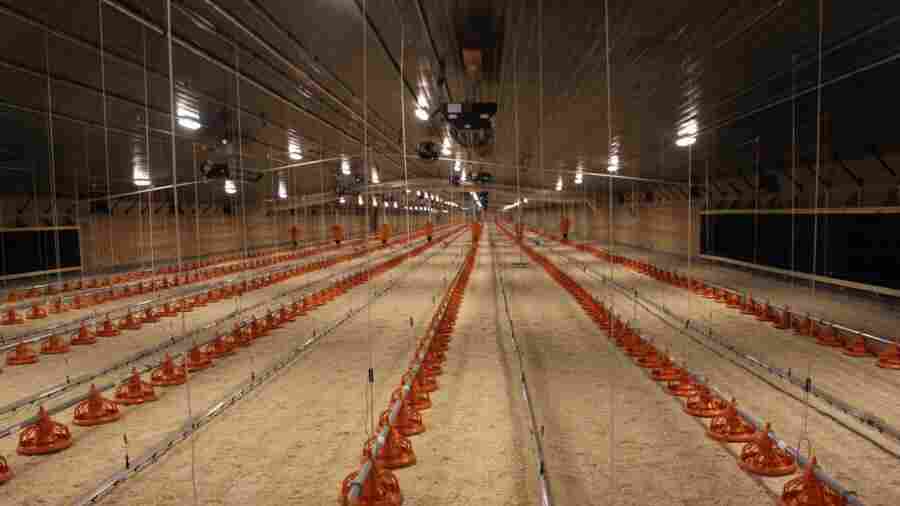 A handful of companies — think Tyson and Perdue — all but control poultry production in the U.S. They'll soon be joined by a retailer known more for chicken sales than chicken production: Costco. The warehouse retailer is now building a farm-to-table production system to ensure a steady supply of rotisserie chickens.

The center of the operation is currently under construction on the south side of the eastern Nebraska city of Fremont, population about 26,000. Cement trucks come and go as crews line up concrete walls and steel beams for a processing plant, hatchery and feed mill. Around 100 new chicken farms in the area will be under contract to raise the birds. 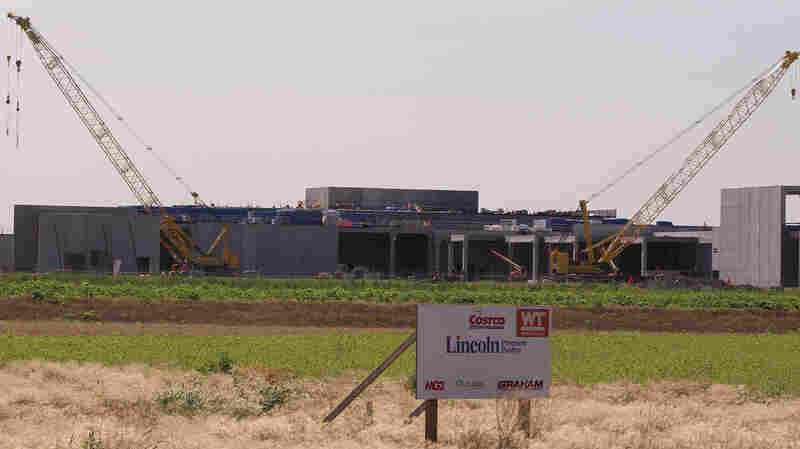 The concrete shell of the new chicken processing plant is under construction on the south side of Fremont, Neb. The city of about 26,000 people is no stranger to the meat packing business: a Hormel pork plant sits across the road. Fred Knapp/NET Nebraska hide caption 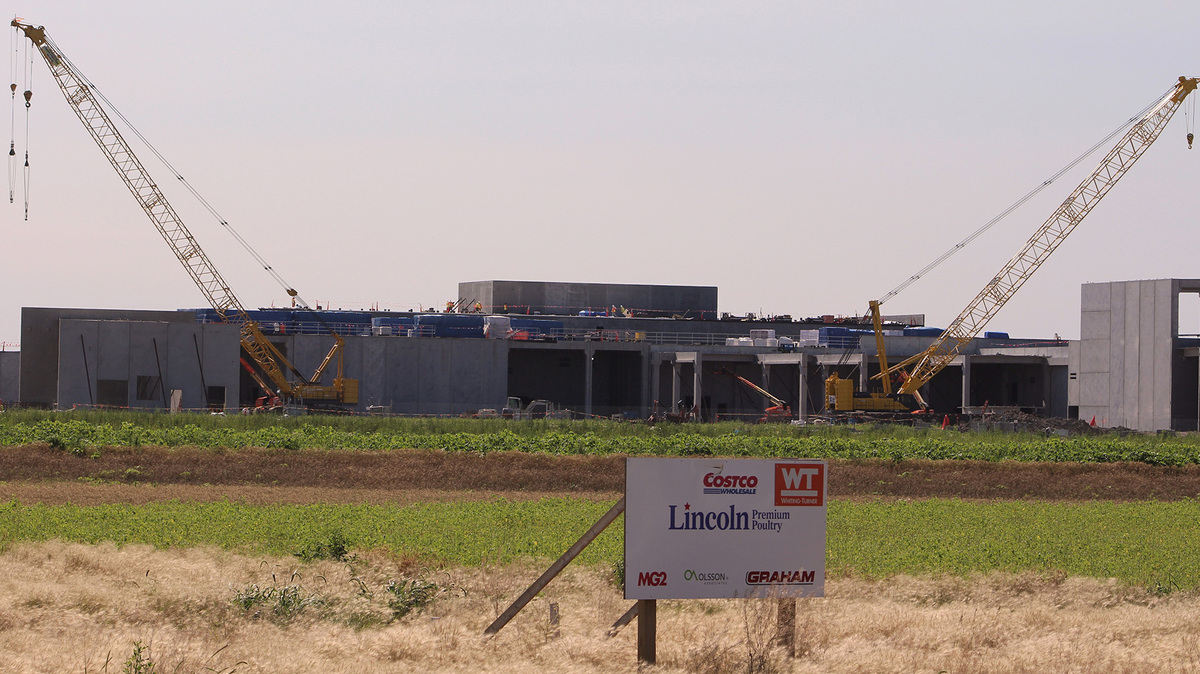 The concrete shell of the new chicken processing plant is under construction on the south side of Fremont, Neb. The city of about 26,000 people is no stranger to the meat packing business: a Hormel pork plant sits across the road.

When it reaches full capacity, the plant will process more than 2 million chickens per week. Some will become rotisserie chickens, and others will be sold as parts.

"All of our barns in Nebraska and Iowa collectively will supply about 40 percent of Costco's needs," said Jessica Kolterman, a spokeswoman for Lincoln Premium Poultry, the company started by Costco to build and manage the project. "That will roughly cover the western half of the United States, Alaska and Hawaii."

Costco sells approximately 60 million rotisserie chickens each year, according to Kolterman. Building a system to stock its own stores is a way for the company to better manage supply and costs, especially because poultry companies are trending away from raising chickens to be sold whole.

According to Will Sawyer, a meat industry economist for the Denver-based farm lender CoBank, chicken producers are growing bigger chickens to sell in parts. "The vast majority are processed into chicken breasts or leg quarters or thighs, or they're further processed into strips or nuggets," Sawyer said. "That's where the industry has gone over 50 years now."

The larger chickens are good for parts but aren't well suited for the rotisserie. With its own farm system, Costco will be able to ensure that there are enough smaller chickens for its rotisserie sales. Basing that system in Nebraska will help keep the price fixed at $4.99 because there's a plentiful supply of corn for chicken feed.

Other chains such as Walmart are supplying some of their own milk, Sawyer said, but none have gone fully vertical into meat production like this. From the top down, Costco will control both supply and demand, which leaves some farmers concerned that the company will have too much control. Big chicken companies have been accused of fixing prices to overcharge customers and manipulating farm contracts to punish growers under contract.

"Costco comes in and, while they have a good corporate citizen reputation, it still is at the end of the day a poultry contract," said Nebraska Farmers Union President John Hansen.

Costco will offer 15-year contracts to 100 to 125 prospective growers. The number of chickens will vary, but a typical farm with four barns could house nearly 200,000 chickens at a time. Critics have raised concerns over the potential odor and water contamination from the facilities.

But Hansen said the farmers are taking a financial risk. They would be responsible for financing and building the new chicken barns, which could cost $1 million or more. If Costco ever decides to cut production, farmers could be left with empty barns and massive debt. "What do you do with a poultry barn that is, for the most part, a single-use building if you don't have birds?" Hansen asked.

Even though the contract requires a big investment up front, Lincoln Premium said more than enough farmers have shown interest in signing contracts. The farm economy is struggling here, and many grain farmers think turning to chickens is worth the risk in order to bring in new revenue. 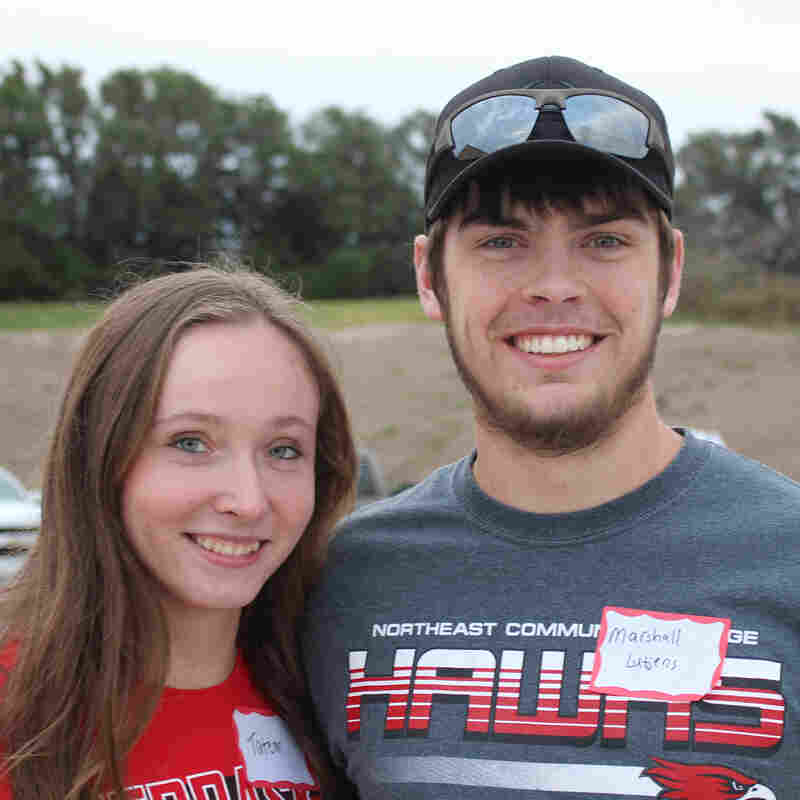 Marshall Lutjens farms near Columbus, Neb., and is thinking about signing a contract to raise chickens for Costco. His girlfriend, Tatem Vance, is in favor, encouraging him to sign up. Fred Knapp/NET Nebraska hide caption 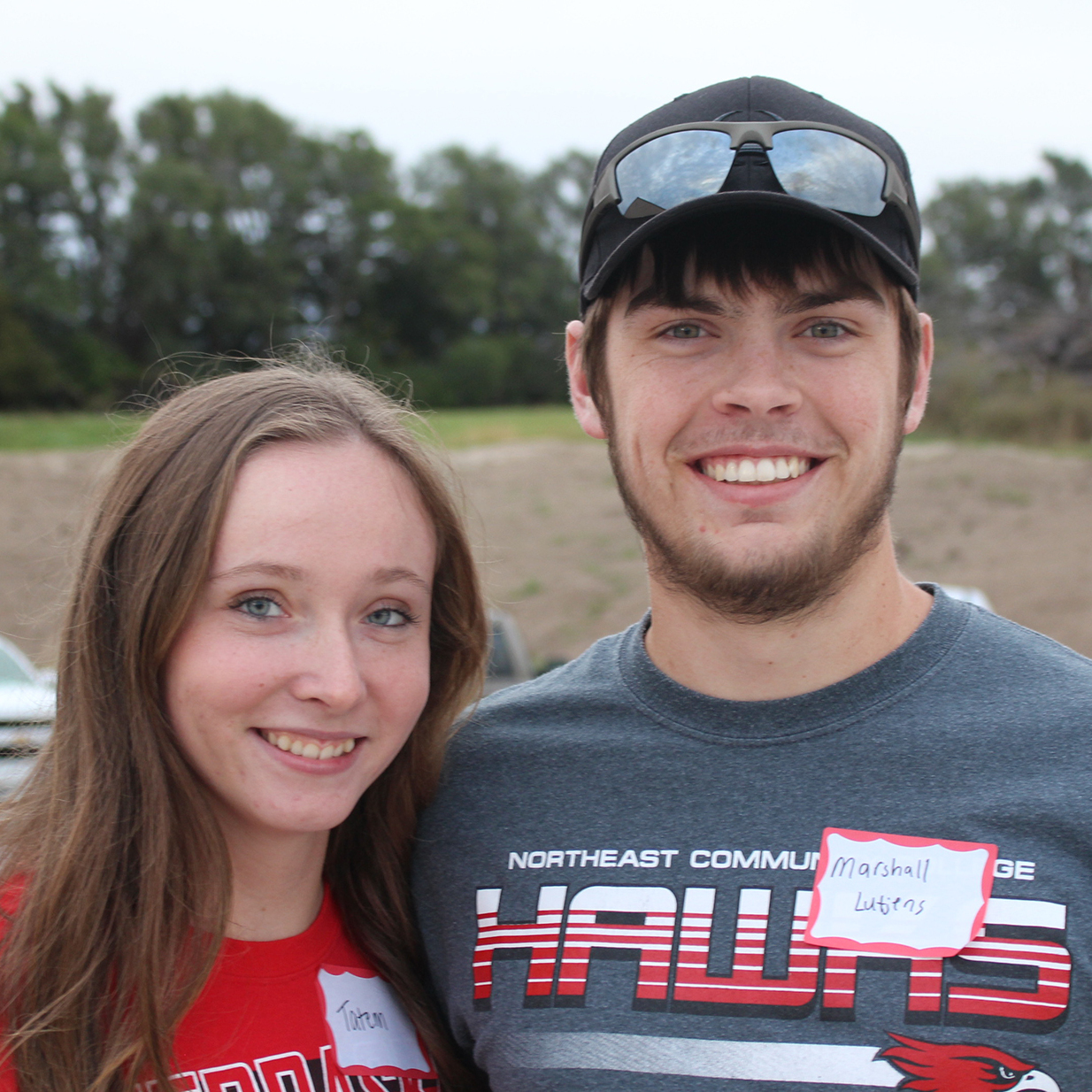 Marshall Lutjens farms near Columbus, Neb., and is thinking about signing a contract to raise chickens for Costco. His girlfriend, Tatem Vance, is in favor, encouraging him to sign up.

"My biggest thing is, if something ever happened to the company, who's going to fill the barns? Because you're putting a lot of money down for barns," said Marshall Lutjens, a young farmer from Columbus, Neb., who attended a recent open house celebrating the first chicken barns built for the Costco project. "The only other thing I thought about was (raising) hogs because there's more companies," Lutjens said.

There are really no other poultry companies around to purchase chickens if something happens with Costco, but Lutjens was feeling optimistic. "After today I think I might be tipped," Lutjens said. His girlfriend, Tatem Vance encouraged him to "just say yes."

For farmers here signing up to raise chickens for Costco, the hope is that the store's members will always be hungry for more.

Fred Knapp contributed to this report.

In a previous Web version of this story, we neglected to point out that some of the chickens processed in this Costco facility will be sold as parts and others will be sold as rotisserie chickens.