Accessibility links
The Beastie Boys On Their Hip-Hop Journey And Missing Adam Yauch : What's Good with Stretch & Bobbito Adam Horovitz (aka Ad-Rock) and Mike Diamond (Mike D) of the hip-hop group Beastie Boys talk about their new book, which is largely a love letter to their late band mate, Adam "MCA" Yauch. Plus they reflect on growing up in 1980s New York City and how they gained respect in hip-hop. 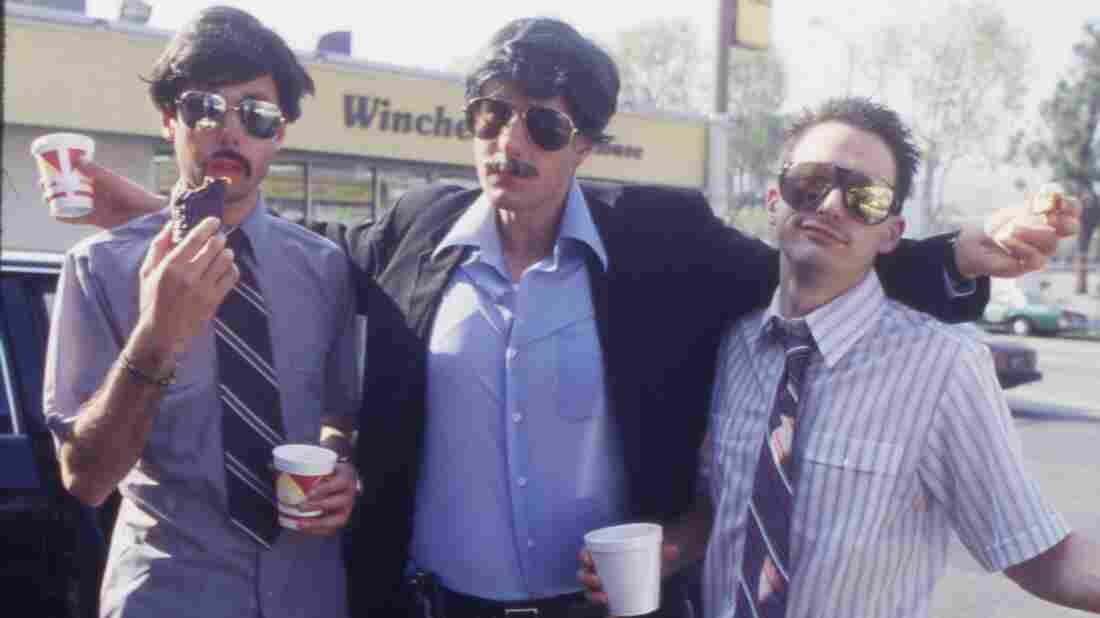 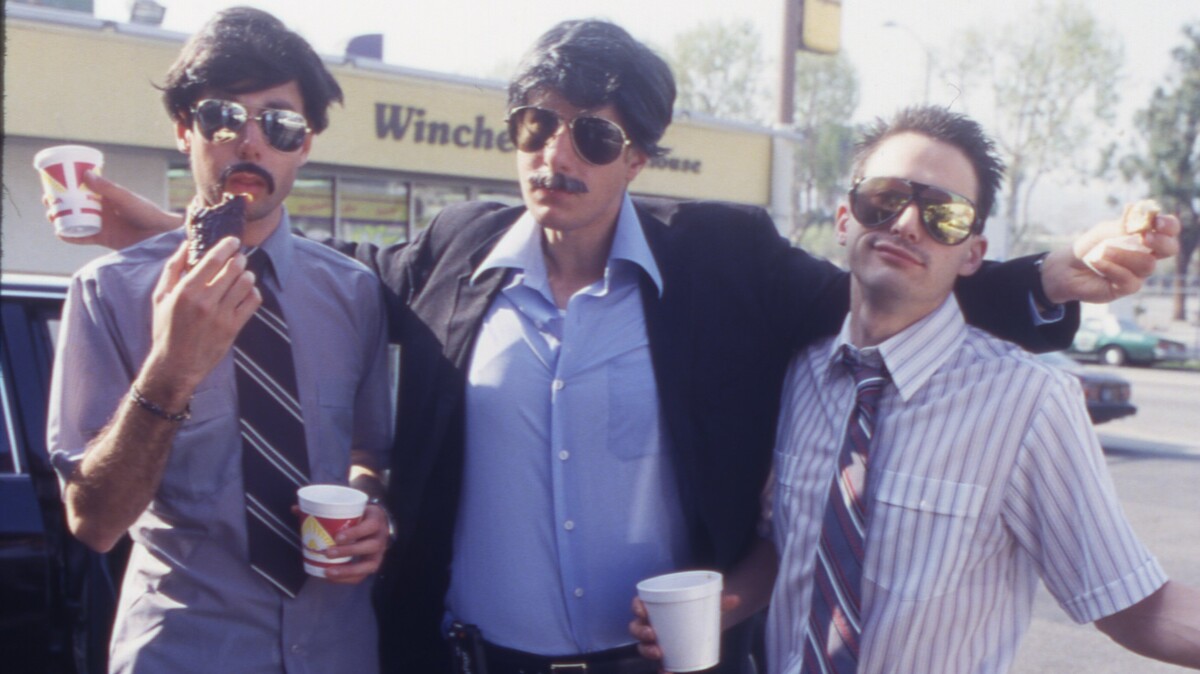 The trio first formed in 1981 as a hardcore band, playing shows and hanging out in the Lower East Side punk scene. But little by little hip-hop began seeping into their work. In 1983 they released an experimental hip-hop EP called Cooky Puss, which gained local success and was used — without their permission — in a British Airways commercial (they sued the airline and got $40,000 for use of their song).

With that money Ad-Rock bought an 808 drum machine and the Beasties fully committed to their new identity as a rap group.

Around the same time they befriended a young DJ named Rick Rubin, then a student at NYU, who together with classmate Russell Simmons founded Def-Jam Recordings. Beastie Boys were one of the label's first releases.

Beastie Boys' first mainstream success was with their 1986 Def Jam release License To Ill, which topped the Billboard charts and by 2015 was certified diamond, marking the sale of 10 million units. Throughout the group's 30 years in music they've released a total of eight studio albums, the last being the 2011 release Hot Sauce Committee Part Two.

Sadly, the Beastie Boys as a group effectively ended on May 4, 2012 when Adam Yauch died of salivary parotid gland cancer at the age of 47.

Ad-Rock and Mike D stopped by the Stretch and Bobbito studio for a conversation about the making of Beastie Boys Book, about their early years in New York City, how they found their way as white kids in hip-hop and how they keep the memory of Adam Yauch alive today.

On How They Broke Into Hip-Hop As Teenagers:

AD ROCK: Our talent and skill as rappers is clearly the first thing you notice. I don't know what we were thinking. We just really love rap and wanted to be rappers. Is that weird?

MIKE D: I think it was weird, but it just didn't cross our minds that it was weird. We just loved hip-hop. I think when we started to make rap music, when we made our first record with Rick, which was not very good, Rock Hard. I mean, really I'm doing myself a disservice by even mentioning it. The first time that we went up we played a show and at the Encore opening up for Kurtis Blow, the Encore in Queens. We were so excited we all were in Puma suits and f**ing 'do rags and we go and people at Encore are looking at us like... I don't understand how we did not get killed that night. I really don't because if I were in the audience I would have killed us.

AD ROCK: We were in the limo in matching Puma suits would do rags!

MIKE D: The limo was Rick's idea. I'm blaming that on Rick Rubin.

AD ROCK: Because you know big timers drive in limos and we get out and there's like a hundred kids out front and they'd already ripped the gates off the place or some crazy guy had. We're trying to get through the crowd with all these dudes were calling us Menudo. And we get on stage and then right as we do our little song they turn all the house lights on which were fluorescent supermarket lights.

MIKE D: We did try and got close, but in failure we got somewhere.

On Their Extensive Archive Of Unreleased Beastie Boys Music:

MIKE D: There's a lot, like any band, but probably actually more so than a lot of bands because we spent a lot of time in the studio. We also smoke a lot of pot. There's a lot of stuff made that might not have been as good or focused as it should have been.

AD ROCK: Basically what he's saying is we had a studio in L.A. for a few years and we would go there every day and play music. And so we would record everything ... everything. So we have like a hundred hours of like stoner jams. And in between those is like you can hear us playing basketball or you can hear someone playing guitar with people playing basketball or someone ordering food while the other people are talking about other stuff and it's just hours and hours of music and bullshitting. At some point we're going to put that out somewhere.

MIKE D: I guess the point is there's a lot of stuff that hasn't been released that at some point could. But you know it's not like there's any plan in terms of that.

AD ROCK: But me and Mike aren't going to make like a new Beastie Boys record.

On Why Now Is The Right Time To Release Beastie Boys Book:

AD ROCK: Why now is because it was due like two and a half years ago, so we're two-and-a-half years late.

MIKE D: We started an idea conceptually when [Adam] Yauch was still alive. Yauch had this idea, a vision. He was always obsessed with The Who documentary The Kids Are All Right. He wanted to make a film like that and we started talking about, like, oh we should do a book, also. Obviously when Yauch passed it was such a tremendous loss and we were so sad. It was not something we were going to focus on for quite some time and then we finally got around to it and then like everything it took us a crazy long time to actually get it done.

We went through a couple of false starts. First we started interviewing characters around the band. I think at that time we were kind of like afraid to get into it because it was going to be too sad for us or whatever, so that was a way to do it. Then we realized that's fine, but that's not our story to tell. That's not the book that people are going to want from us. Mourning people you love is a weird thing, like, you can get to a point where it is OK. It was, I think, a nice opportunity for Adam and I to work together and then think about this person that had been such a big part of what we all did together and kind of try to make his voice be part of the whole the whole project.

On Mourning The Loss Of Bandmate Adam Yauch:

AD ROCK: I mean what are you going to do? You know, you have to continue with your life. You can't not do that. Certainly not to make light of it, but, we are people. Mike lost his dad when he was very young. I lost my mom when I was young, and not to make light of Adam. You know it's very different. Hopefully you have people in your family that you love that you can you know lean on you have your friends that you can lean on. So part of this book maybe was helpful for us to continue to hold onto Adam and some sort of way.

Mike D: Timing wise for us it was like we could embrace his voice and not have it be...look, we're still going to miss him. We still love him we still miss him and I don't know if you can ever change that dynamic, but you can get to a point where it's, like, look I'm so grateful for the times we had more than being sad for where I'm at now.

AD ROCK: It's a very weird relationship, though, because the three of us were together so much like you think about when you're with your friend and you hang out with your friend and then you go do whatever you do in your life. You know, and then you see your friend again. But for us we were friends that we would be together and then we would go to work which was us still again. So we were always together. And so it definitely was you know a long time and still is to think about like you know wake up in the morning be like oh OK so what do we do now?