Accessibility links
Florida's Governor Race Could Be A Test For Trump Democratic candidate for governor Andrew Gillum has been polling just ahead of Republican Rep. Ron DeSantis in Florida. While DeSantis has full Trump support, Gillum draws progressive enthusiasm. 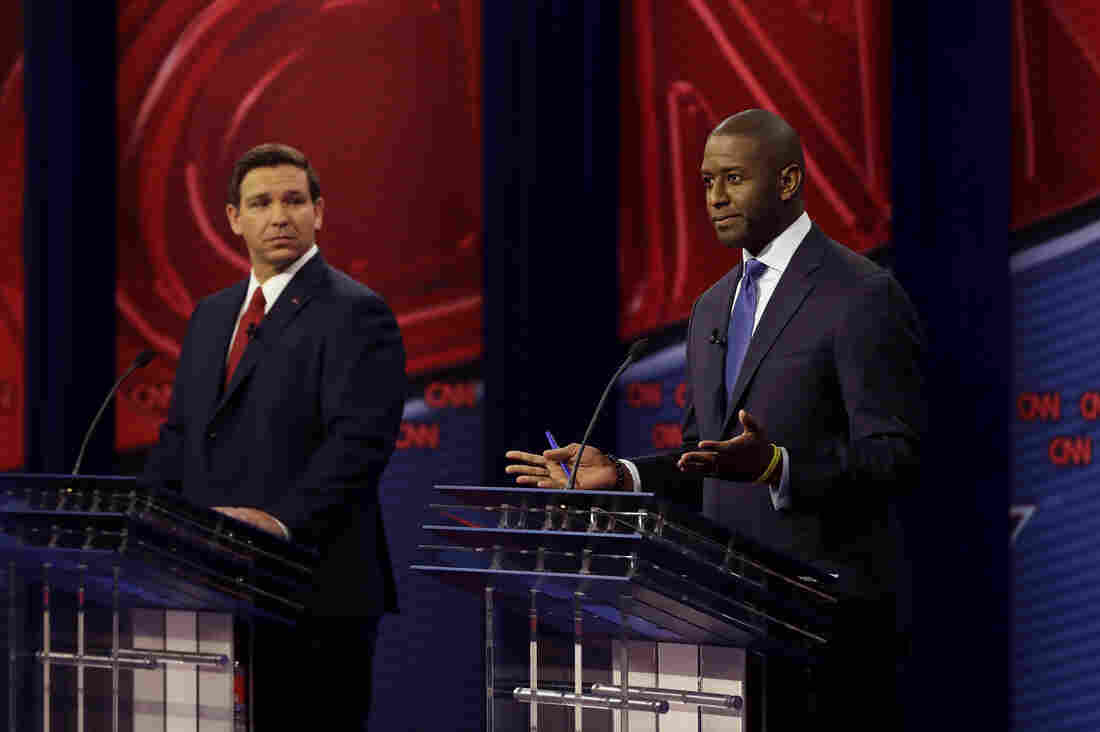 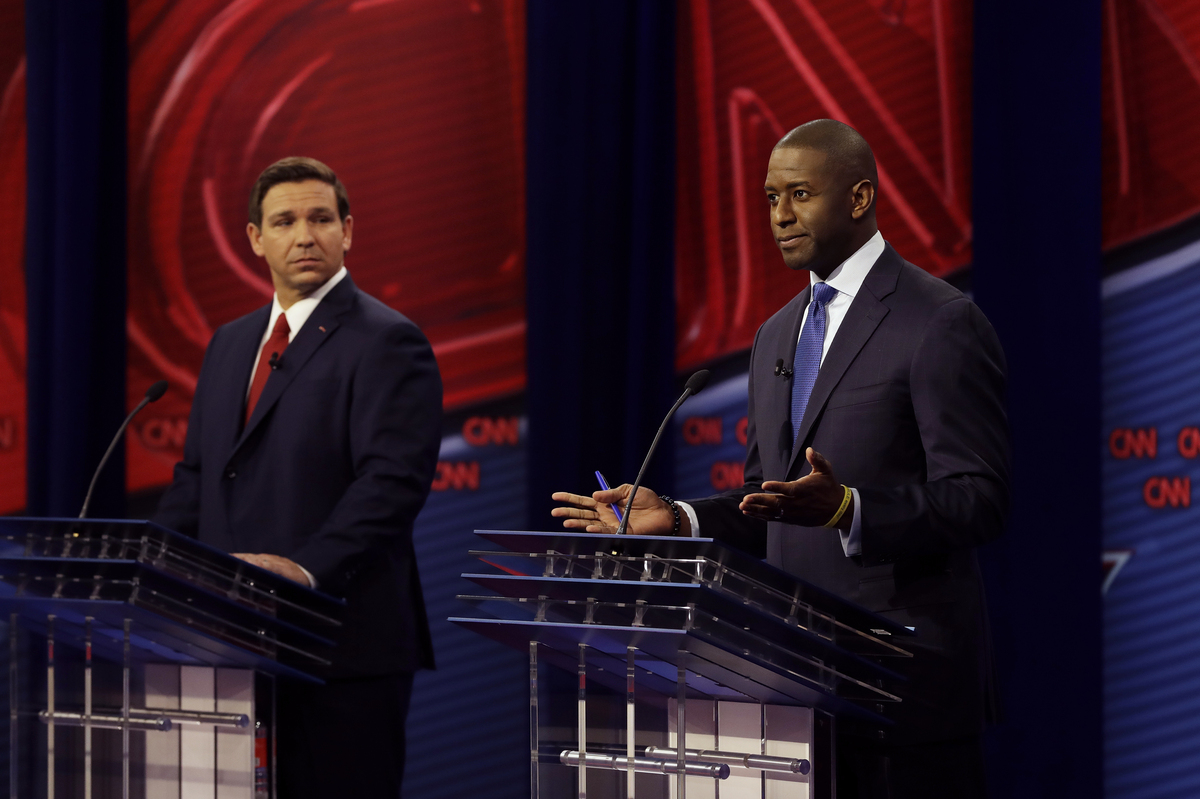 More than 300 people recently packed into a college auditorium in the middle of a weekday to see Tallahassee Mayor Andrew Gillum in St. Petersburg, Fla. The Democrat is running for governor and, if elected, would be the first in the party to win the seat in the state in 20 years. He'd also be the first African-American governor in Florida's history.

He's facing former Republican U.S. Rep. Ron DeSantis in a contest that has been marked by heated attacks, the influence of President Trump and a hurricane.

The race is tight. Some recent polls have had Gillum pulling several points ahead of DeSantis.

This was one of Gillum's first campaign events after a hiatus while his city recovered from Hurricane Michael, and he was happy to talk about it. "I'm proud that in our city," Gillum said, "even though we had over 90 percent of our electric grid system knocked out, that one week to the day of the storm, 99.5 percent of the people in my city had their power back."

The recent hurricane, and Tallahassee's response to it, has helped put to rest attacks from Republicans about Gillum's leadership during Hurricane Hermine two years ago.

In his campaign speeches, Gillum routinely outlines a series of mainstream Democratic and progressive proposals. He wants to expand Medicaid under the Affordable Care Act, a move that would pull in billions in federal funds and extend care to some 800,000 Floridians.

He wants to increase the starting salary for teachers to $50,000, raising Florida from one of the lowest to one of the highest in national rankings of teacher pay.

And Gillum told the crowd in St. Petersburg he wants to nearly double the minimum wage in Florida to $15 an hour. "Everybody I know wants to earn enough where they can take care of themselves and their families and maybe take a vacation one weekend out of the year. And that shouldn't be too much to ask in the state of Florida," he said.

Gillum has been drawing enthusiastic crowds to his campaign rallies since the primary, when he defeated a crowd of well-funded opponents. Ann Pellishek, a supporter and campaign volunteer, says she likes Gillum's progressive ideas, his humility and his charisma. She says his race shouldn't be a factor. "I lived in Virginia for 30 years," she says. "I will tell you that Virginia is a very conservative state and we had a black governor ... for heaven's sake. So it's not a big deal."

But race has been a part of the campaign. Talking about the state economy in August, Republican Rep. Ron DeSantis said voters shouldn't "monkey this up" by electing Gillum—a comment many called out as racist. Desantis has also had to defend his participation in racially-charged conferences and his connection with a donor who made racist comments about President Obama.

This past weekend, DeSantis made a campaign appearance at a favorite stop for Republican candidates, a large central Florida retirement community called The Villages. To a crowd of over three hundred cheering supporters, he said, "Its's great to be in America's friendliest hometown. " The Villages is Trump country. Many in the crowd sported red "Make America Great Again" caps. When asked, about a third of the audience said they were part of "Villagers for Trump." Sherry Ray drove over from nearby Ocala, Fla. She says, "I have tremendous respect for what Donald Trump has done. And I respect that he chose Mr. DeSantis to run. And that's why I'm here."

While President Trump didn't "choose" DeSantis to run, his support has made all the difference. The President's endorsement and his appearance at a rally with DeSantis in Tampa helped boost the former congressman to an easy win in the primary.

Since then, DeSantis has concentrated much of his campaign on attacking Gillum. In his speeches, DeSantis calls Gillum a "socialist," an unfounded label Gillum rejects. Another line of attack has more substance. "I'm the only one of the two of us who can credibly say he's not under FBI investigation for corruption, " DeSantis said to the crowd. The FBI is investigating city contracts with developers in Tallahassee, including one with whom Gillum went on a vacation to Costa Rica. Gillum denies any wrongdoing and says the FBI told him he's not the focus of the investigation.

In his attacks, DeSantis is getting help from President Trump. Over the weekend, the President said on Twitter that Gillum "runs one of the worst and most corrupt cities" in the U.S.

DeSantis picked up the theme against Gillum in a debate Sunday, calling Tallahassee the most violent city in Florida. "Andrew couldn't keep Tallahassee safe," DeSantis said. "He's not the guy to keep Florida families safe."

Gillum immediately struck back, saying, "Well, Ron is being Don, and that's Donald Trump, neglecting all sense of reason and facts. I preside over a city that is experiencing a five year low in our crime rate on a trajectory to be at a twenty year low." There were 17 murders in Tallahassee last year, an all-time high. But, the crime rate in the city has steadily dropped since Gillum took office four years ago.

Who wins the governor race has major implications, not just for Florida but also for the nation. It will also be a test of President Trump's popularity in the nation's largest swing state, two years before his expected bid for re-election in 2020.

In previous audio and Web versions of this story, Ann Pellishek said Virginia had a black governor in the 1960s. In fact, the state's first black governor, Douglas Wilder, took office in 1990.