Accessibility links
House Republican Faces Voter Backlash Over Health Care And Tax Votes Rep. Tom MacArthur ran for Congress vowing to repeal Obamacare and cut taxes. After following through on both promises, he's on the defense for his role amid voter backlash about the economic impact. 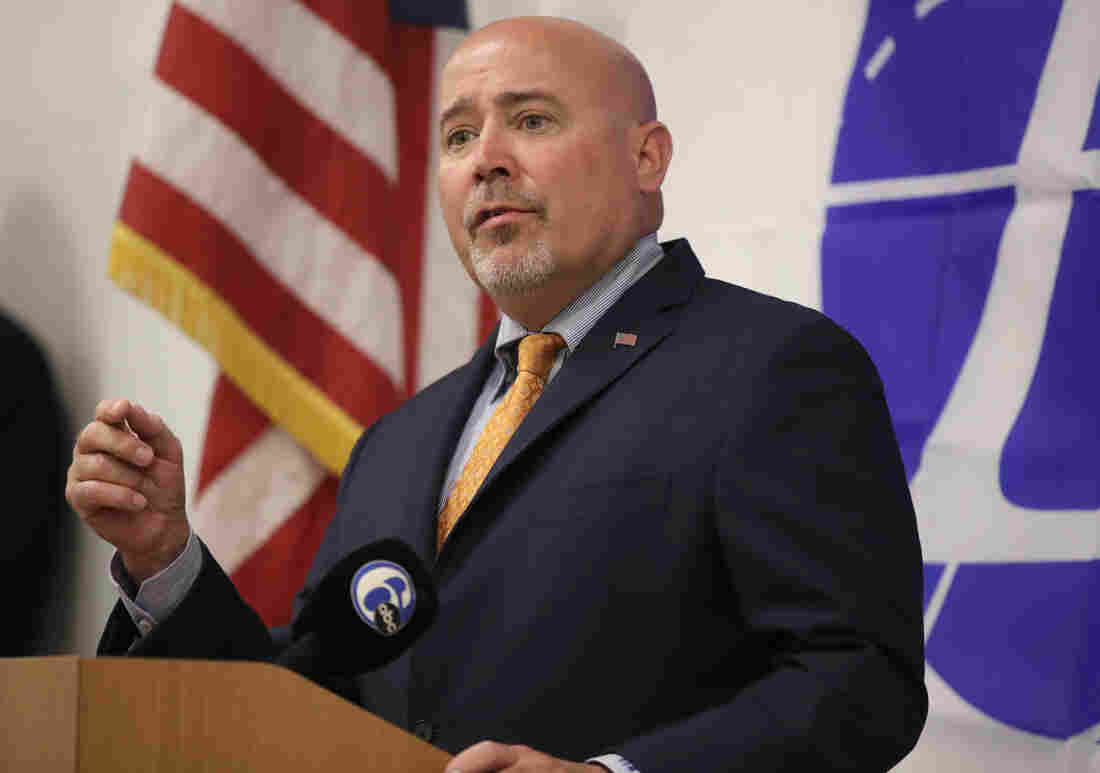 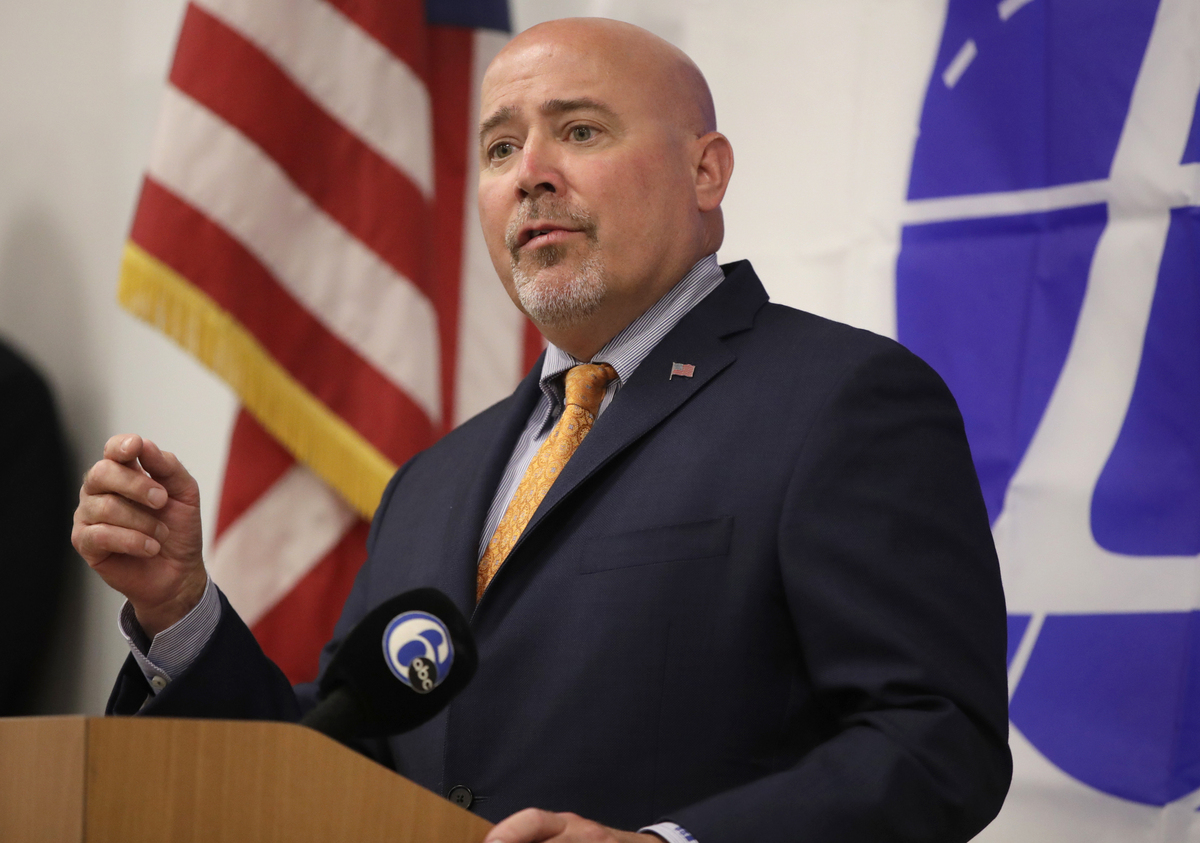 New Jersey Republican Tom MacArthur is a like a lot of Republicans running for re-election this year. He ran in 2016 on a promise to repeal the Affordable Care Act and cut taxes across the board.

Two years later, his decision to follow through on both could cost him his seat.

MacArthur won his congressional race two years ago by more than 20 points, but now he is running neck-and-neck with Democrat Andy Kim, a former national security official who launched his campaign as a reaction to MacArthur's central role in keeping Obamacare repeal alive. He said he was inspired to run for office when a health crisis hit his family just as the health care repeal was working its way through the House.

"Seeing that contrast between my representative on TV talking about how he saved that health care repeal bill and gutting pre-existing condition protections, while I'm at the hospital worrying about my family's future, that's why I got into this race,' Kim said. "When I talk to people in this district, it is the same thing. They're not forgetting about health care."

Health care is dominating this race, but so are concerns about the impact of the GOP tax bill that capped the deduction for state and local taxes. MacArthur is the only congressman in New Jersey running for re-election after voting for the health care repeal and the tax cut legislation.

That unique combination has made him a prime target for national Democrats who frame this race as a referendum on the entire GOP agenda under President Trump.

MacArthur is fighting back, arguing his votes on those two issues are just a part of a broader career built on bipartisanship.

MacArthur declined to participate in this story, but he defends his approach to voters in his latest ad.

"I've been named one of the most bipartisan members every year in Congress," MacArthur says, looking directly into the camera. "Andy Kim is running to protest Trump. I'm running to represent you, whether you like Trump or not."

The race has at times become a nasty brawl. The candidates have sparred in debates, traded jabs on Twitter and benefited from millions of dollars in attack ads from outside groups.

All to win an increasingly small sliver of votes, just two weeks before voters go to the polls.

Democrats say Republicans miscalculated when they tried to repeal the Affordable Care Act. The law, which was once the subject of bipartisan frustration, grew in popularity when voters began to worry that Republicans would end its most popular protections.

That made it difficult for GOP negotiators to agree on many of the elements to replace the law they vowed to end. By early 2017, the repeal effort — a core party campaign pledge since 2010 — seemed doomed as House Republicans sparred over pre-existing conditions, birth control coverage, minimum standards for health plans, controlling costs and the end of coverage for millions of people.

But then MacArthur stepped in with an amendment that saved the House bill by trading off some federal standards for continued protection for those with pre-existing conditions.

He created a way for states to request waivers to get out of major portions of the law, like a requirement preventing insurers from increasing prices on older, sicker people and minimum coverage standards for health plans.

The New Jersey Republican defended that proposal after his efforts helped secure enough votes to pass a House repeal bill.

"I've said many times that this bill is not perfect, but it's an improvement from where it started and I stand by my efforts to make it better," MacArthur said in a statement following the vote.

Voters like Jen Sime, who was one of dozens of constituents who showed up to confront MacArthur at a nearly five-hour town hall following that vote. Sime is now the vice president of a local young Democrats chapter that is organizing for Kim.

"There's been a very big effort to make sure people don't forget that feeling," Sime said. "The legislation he tried to bring into Congress would have affected me personally. There's no rhyme or reason to take coverage away from people who desperately need it and wouldn't be able to get it otherwise."

Sime says she hears about health care frequently when contacting potential voters by phone ahead of the midterm election. It's something she says Kim taps into at nearly every event he does.

"It's about people's lives, its personal," Kim said. "Ninety percent of the people that come to our events have told me they've never been to political events; they've never contributed to candidates before.

MacArthur has taken some steps to soften the impact of his vote. He now says he supports some parts of the law, particularly the protections for people with pre-existing conditions.

"My commitment has always been to protect pre-existing conditions," MacArthur said in a recent forum on News 12 New Jersey. "Maybe do it differently than the Affordable Care Act that has driven costs up."

Many voters, like Paul Sheppard, say that message is confusing.

Sheppard, shopping at a farmers market in the largely Republican coastal town of Tom's River on a recent afternoon, says both candidates are running negative ads that attack the other without really saying what their positions are.

"I don't like the fact that they're bad-mouthing each other," Sheppard says. "It doesn't make me feel good about voting for one or the other."

Taxes lurk in the background

Health care may have been the issue that went viral, but the Republican tax bill is also haunts MacArthur.

He was the only member of the New Jersey congressional delegation to vote for the tax bill, because most members worried it would curb tax breaks that are extremely popular in the state. Many people here already use the maximum deductions for state and local taxes, which are high in New Jersey, and the mortgage interest deduction. And they were hit particularly hard when Republicans decided to lower the cap on those deductions.

MacArthur defended his support for the bill in a statement released when the bill passed the House last December.

"Months ago, some in my own party wanted to eliminate the state and local tax deduction, which would have had a devastating impact on the overburdened taxpayers in New Jersey," MacArthur said. "After months of negotiations with The White House and House Leadership, I was able to successfully restore the property tax deduction, which will benefit all South Jersey property owners."

But that's not a huge comfort to voters like Bruce Preston, who was having breakfast at the Golden Dawn diner recently in Wilingboro.

Preston says he usually votes Republican, but he doesn't like that New Jersey got hit hard by the tax law. He says he's not really comfortable with rolling back the Affordable Care Act either.

"I certainly will vote Republican for the Senate," he said. "Absolutely."

But when it comes to the House, he's just not sure. Preston says he likes the idea of the House being controlled by Democrats as a way to keep policies in check, even if Trump is still president and Republicans control the Senate.