Accessibility links
She Was Poised To Be A Star — Instead, She Spent 60 Years In Her Apartment Annapurna Devi could have been famous around the world — possibly on par with her first husband, Ravi Shankar. Instead, she stayed at home for more than six decades, before dying on Oct. 13 at age 92.

She Was Poised To Be A Star — Instead, She Spent 60 Years In Her Apartment

She Was Poised To Be A Star — Instead, She Spent 60 Years In Her Apartment 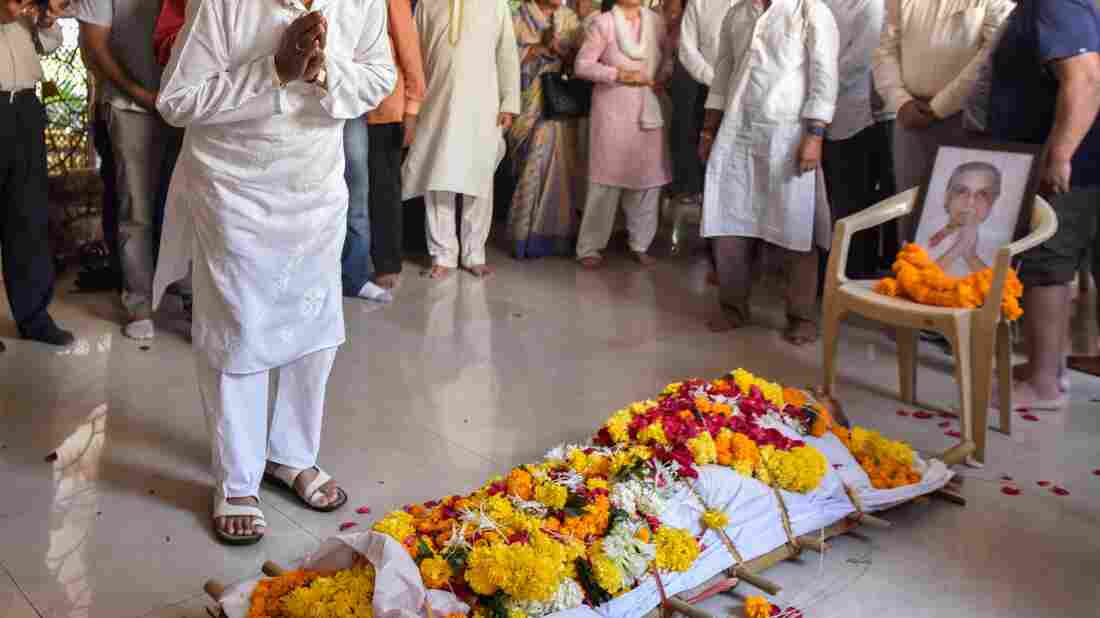 Annapurna Devi being given her last rites at Chandanwadi Cremation at Marine Lines on October 13, 2018 in Mumbai. Hindustan Times via Getty Images hide caption 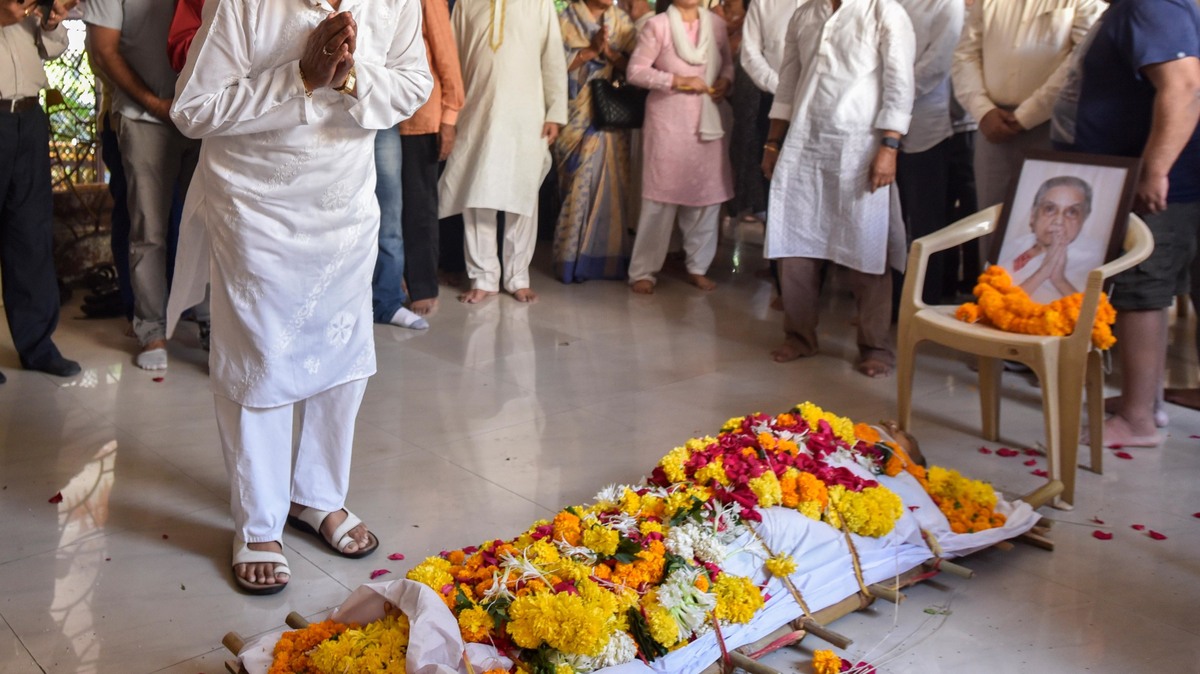 Annapurna Devi being given her last rites at Chandanwadi Cremation at Marine Lines on October 13, 2018 in Mumbai.

Last week, an extraordinary musician died — by many accounts, an artist who may have been the best Indian classical artist of the 20th century. But this superlative talent chose to erase herself from public life more than 60 years ago.

As a surbahar (bass sitar) player, Annapurna Devi was hailed in the 1940s and 1950s as a virtuoso, in possession of a nearly singular musical sensitivity. But if outsiders knew her at all, it was most likely only as an accessory to the men in her life: as the first wife of a worldwide sitar celebrity, the late Ravi Shankar, or as the daughter of Allauddin Khan, a venerated master of the lute-like sarod whose students helped Indian classical music reach a much wider world.

Annapurna Devi died at age 92 on Oct. 13 at Breach Candy Hospital in Mumbai; a spokesperson from her foundation told the Hindustan Times that she had been suffering from age-related health issues for several years prior to her death. In a 2014 feature, the Times of India reported that she had Parkinson's and had "long stopped teaching."

How and why Annapurna Devi withdrew from the public eye in the mid-1950s is a complicated and tragic tale. At its heart is a very unhappy first marriage, in which anger and jealousy appear to have soured the partnership. Whether those hostilities were rooted in professional rivalries or romantic infidelities depends entirely on whose narrative you rely upon. Later, the former couple fought over their son, Shubho, whose own life was short and troubled.

What is unquestionable, however, is that Annapurna Devi was a profoundly gifted artist. Her father and guru, Allauddin Khan, steered her towards playing the surbahar — an instrument whose deep voice, meditative quality, larger size and difficulty in mastery make it extremely rare, even among aficionados. In 1977, the Indian government granted her one of its highest civilian awards, the Padma Bhushan; in 1991, she was given the Sangeet Natak Akademi Award, the highest prize given to performing artists in India.

But those awards came decades after she retreated from the world. After she withdrew from public view, Annapurna Devi took up a monastic-like life, largely circumscribed by her apartment. She never made a professional recording. The only recordings that exist of her playing were made surreptitiously and are of poor quality. After the mid-1950s, she never played her instrument in public again and did not allow herself to be photographed. Even the Padma Bhushan was delivered to her home.

Since she took her vow, reportedly the only outsider to hear her play was George Harrison, whom she allowed to sit in on one daily practice session — an experience granted only after much coaxing from India's then-prime minister, Indira Gandhi. (Writer Reginald Massey was once allowed to sit in on a lesson she was teaching; in his obituary of her for The Guardian, he wrote: "She was very precise and her improvisations while developing a raga were incredible.")

Before vanishing, Annapurna Devi had earned her way into the musical stratosphere. As a young girl — then named Roshanara Khan — she was not allowed to study music, unlike her brother, Ali Akbar Khan, who in turn became a famous musician himself.

Their father, Allauddin Khan, was one of the most illustrious musicians in the Hindustani (North Indian) tradition. But he had pledged not to teach his daughter music. Still, Annapurna was always listening. When she was about 10, she heard Ali Akbar making a mistake in his practicing — and corrected him. Her father overheard the exchange, and changed his mind about her musical education on the spot. He began her on the sitar, but later asked her to take up the surbahar instead, telling her that it would never be as popular an instrument as the flashier sitar, but that her refinement and musical depth would be appreciated by connoisseurs. The choice, he said, was hers.

Annapurna Devi and Ravi Shankar met when Allauddin Khan took Ravi on as a student. In accordance with the practice at that time, Ravi moved into his guru's household in the town of Maihar, in the state of Madhya Pradesh, where Allauddin Khan was the court musician to the local maharajah. So Ravi lived alongside Allauddin Khan's own children and proteges, Ali Akbar and Annapurna.

When Ravi arrived in Maihar, he was 18 and already a worldly sophisticate who had toured the globe as a dancer in his brother Uday's troupe. By his own reckoning, he'd had many flings and had fallen for one girl in particular during his life on the road.

By contrast, the sheltered Annapurna had just turned 13 when she met Ravi. Within less than two years, they had married.

On the same day of their wedding — May 15, 1941 — she converted to Hinduism. (Allauddin Khan's family was officially Muslim, but his beliefs and practices incorporated Hinduism as well. Ravi Shankar said that Allauddin Khan suggested that his daughter convert.)

It was, by both his and her accounts, not a love marriage; Uday first suggested the match, and Allauddin Khan agreed to the proposal. In his first autobiography, My Music, My Life (published in 1968, at the height of the West's love affair with Indian music), Ravi dispatches an account of his life with Annapurna in a single sentence: "After I had been with Baba ["Father," meaning Allauddin Khan] for several years, a marriage was arranged between his daughter Annapurna and myself."

Within just two months of their wedding day, Annapurna Devi was pregnant with their son, Shubhendra, nicknamed Shubho. She was 15; he was 21.

In Raga Mala, his second autobiography (published in 1997), Shankar wrote that their marriage was already falling apart when Shubho was an infant; he blamed her "tantrums," but also confessed that she knew about his past relationships. And soon enough, he was again in love with another woman, Kamala Sastri, another member of Uday's performance troupe as well as the sister-in-law of another Shankar brother, Rajendra.

(When the Shankar family realized that a romance was budding between Ravi and Kamala, they speedily arranged for Kamala to be married off to film director Amiya Chakravarty. After Chakravarty's death in 1957, Ravi and Kamala reunited and had a long-term relationship until 1981, although, in Raga Mala, Shankar wrote that his relationship with Kamala "didn't stop me having torrid affairs almost everywhere as I traveled frantically all over the world.")

After learning of Ravi's burgeoning relationship with Kamala, Annapurna took Shubho and left Ravi for several months in 1944 before eventually returning. The couple broke up for good in 1956, and Ravi soon left India to begin building his reputation in the West as a solo musician. (They did not formally divorce until 1980.)

Annapurna and Ravi's son, Shubho, had a difficult and short life. Though a gifted sitarist himself who trained under his mother's tutelage while his father was far away, touring the world, Shubho initially decided to pursue fine and graphic art. But he struggled personally.

In Raga Mala, Ravi Shankar recounted an episode that took place in 1980, when Shubho was 28; his son called him, sounding frantic and desperate, and begged for Ravi to take him away from Annapurna. Ravi wrote that Shubho revealed later that day that he had taken an overdose of sleeping pills.

Ravi Shankar's description in Raga Mala of Shubho's alleged suicide attempt and of the dynamics in their marriage enraged Annapurna. In 2000, in the aftermath of the book's publication, she granted one interview to a journalist named Aalif Surti, who at the time was an editor at a magazine in India called Man's World. Surti finagled an introduction to her through one of her students — but after allowing him into her home, she refused to speak with him, and instead answered his written questions with written responses.

In the Man's World "interview," Annapurna blamed Ravi's jealousy of her talent as the downfall of their relationship. "Whenever I performed, people appreciated my playing and I sensed that Panditji [Ravi Shankar] was not too happy about their response," Annapurna wrote to Surti. "I was not that fond of performing anyway so I stopped it and continued my sadhana [spiritual practice]."

She told Man's World that she stopped performing publicly in hopes of saving the relationship — and that she withdrew from the world in a religious vow that she said she made in front of a picture of her father, Allauddin Khan, and an image of the Hindu goddess Sharda — a form of the goddess Saraswati, the deity of learning and of music.

Ravi Shankar told the story differently. "She maybe doesn't like to face the public or she is nervous or whatever," he said in a later interview. "This is very sad because she is a fantastic musician."

In the Man's World piece, Annapurna Devi called Ravi's accounts "false and fabricated stories .... I think Panditji is losing his sense of propriety or his mental balance, or he has turned into a pathological liar."

She said that Ravi's description of Shubho's alleged suicide attempt was a lie, and called the 1980 episode "a stage-managed drama to malign me and to take him away from me. Shubho was immature at the time and hence unwittingly became a party to his father's plot."

Shubho died of pneumonia in 1992, though his relatives noted that he had "been ill" for several months before his death. In his second memoir, Ravi wrote that in the months preceding his death, Shubho "cut himself off from everyone, including me, and when he contracted bronchial pneumonia he didn't bother to seek proper medical treatment."

For her part, Annapurna claimed to Man's World that Raga Mala was meant to "salvage" Ravi Shankar's public persona and "assuage his guilt for the gross injustice he did to his son" — and she asserted that in the months before his death, Shubho cut off communication with Ravi specifically.

In the meantime, Annapurna Devi had built her own world inside of her apartment, venturing only to the balcony to feed pigeons. Serious students also flocked to her — among them, some of the greatest instrumentalists of India, including sitarist Nikhil Banerjee and flutist Hariprasad Chaurasia as well as her nephew, sarod player Aashish Khan. When she remarried in 1982, it was to one of her disciples, the late Rooshikumar Pandya, whom Aalif Surti describes as seeming "to have found a happy mix between being her student, confidante and caretaker."

In 2010 — ten years after the Man's World profile was published — Annapurna Devi again agreed to answer questions from another journalist, this time Suanshu Khurana from the Indian Express. Again, she negotiated her own, very specific terms to the transaction: Khurana wrote her a lengthy letter, to which she responded in kind. She seemed content in her isolation. "I am at peace," the master musician wrote, "when I am teaching a few of my students or when I am practicing or feeding pigeons."