Accessibility links
What's Going On With That Bizarre Rectangular Iceberg? It's getting a lot of attention because of its unexpected angles and straight lines. A sea ice specialist explains why it formed this way. 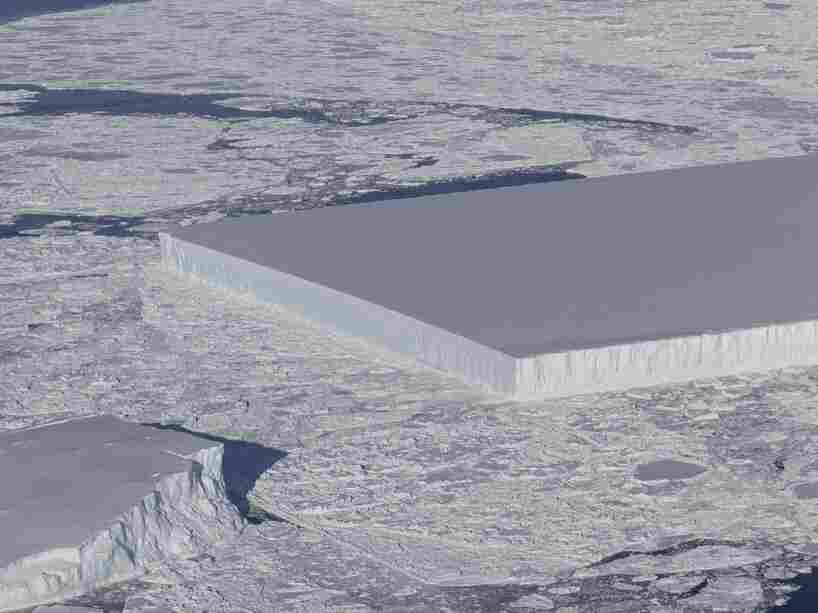 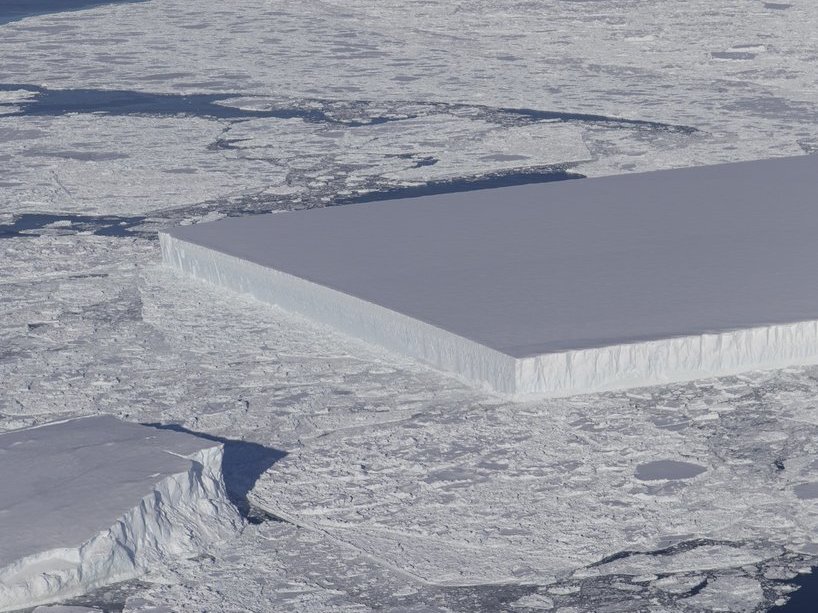 An iceberg recently spotted by NASA scientists looks like it was carefully cut into a perfect rectangle, and it's getting a lot of attention because of those unexpected angles and straight lines.

It looks nothing like the craggy, uneven mass that sank the Titanic, perhaps the most famous iceberg ever.

But in fact, there is little that is particularly unusual about the iceberg photographed floating near the Larsen C ice shelf in Antarctica, as sea ice specialist Alek Petty explains. He is a research scientist with NASA's Operation IceBridge, the group that took the stunning photo, and is based at the NASA Goddard Space Flight Center.

He says it's a kind of formation called a tabular iceberg, which forms in Antarctica, he says, "where we have these really wide floating ice shelves connected to land." The ice is "being kind of spread out in this very thin layer," Petty says, and "because it's ice and it's brittle, if that gets too weak or it comes into contact with something else, it can shatter and kind of break apart."

From yesterday's #IceBridge flight: A tabular iceberg can be seen on the right, floating among sea ice just off of the Larsen C ice shelf. The iceberg's sharp angles and flat surface indicate that it probably recently calved from the ice shelf. pic.twitter.com/XhgTrf642Z

Petty compares the process to a fingernail that grows and grows, "then it gets very weak because really that ice is being kind of extended out into the ocean," leaving less support for the floating ice. At that point, tides or strong winds could break icebergs off.

This iceberg probably recently calved from the ice shelf, NASA says. And the portion above the surface is likely just 10 percent of the total iceberg, Petty says.

But why such straight lines? Petty compares it to a glass plate that shatters — the lines are typically very straight. "You can just get these fracture lines that can form these interesting geometric structures," he says, and points out a different, triangle-shape iceberg spotted by NASA scientists recently.

From yesterday's #IceBridge flight:Triangular iceberg surrounded by many different types of sea ice, off the Larsen ice shelf in the Weddell Sea. In the open water, grease ice is forming. pic.twitter.com/L4WB36bV5H

The rectangular iceberg is about a mile wide, Petty says — considerably smaller than another well-known iceberg from the Larsen C ice shelf. After years of anticipation by scientists, a formation the size of Delaware broke off from Antarctica last year. That iceberg measured about 2,300 square miles, as NPR's Geoff Brumfiel reported.

NASA's Operation IceBridge, which monitors polar ice using plane surveys, has been going on for a decade. But this is the first year that the scientists will also survey Antarctica using the new Ice, Cloud and land Elevation Satellite-2.

"IceBridge and ICESat-2 both use laser altimeters that fire pulses of light toward the ground and measure how long it takes for that light to bounce off the ice and return to the instruments' sensors," NASA said earlier this month. "Scientists can then calculate the distance between the aircraft or the satellite and the ice surface, which gives them the ice height."