Accessibility links
'Travelling Cat' Chronicles Friendship, Loss And Life On The Road You don't have to be a cat lover to enjoy Hiro Arikawa's novel about a man and his cat, traveling across Japan to visit old friends. And you may find yourself tearing up by the end. 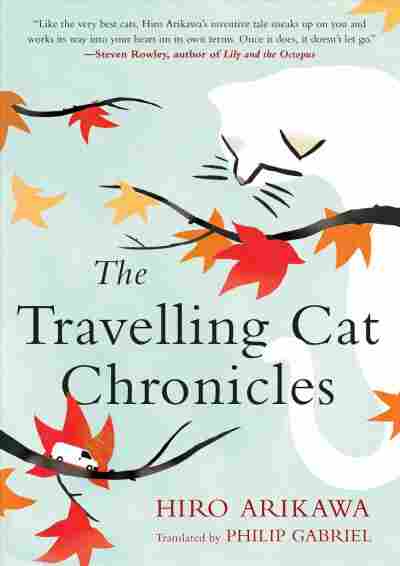 When I first started The Travelling Cat Chronicles — by Hiro Arikawa, translated by Philip Gabriel -- I was admittedly skeptical. I am a cat lover, obsessed with my own kitties as well as the myriad cat memes and wholesome videos that pepper my social media, but I wasn't sure how to react to what seemed, at first, like a schmaltzy novel partially voiced by a proud male stray. But soon I realized what the trouble was — and it wasn't with the book, but with me. My busy, cynical, constantly enraged mind didn't know what to do with a book that was, at its core, joyful. As a book critic, I tend to engage with so-called Serious Books that take on Big Issues. But The Travelling Cat Chronicles is no less valuable for facing issues of friendship, family, loss, and grief with an optimistic and loving outlook. In fact, the book's greatest strength is that it allows its readers to experience vicarious happiness even as a sense of impending loss begins to creep through the pages.

It was easy to stick with the book, as it's full of cat logic gems. When the novel's central character Satoru asks a cat he's just met, "I guess you want something in exchange for being stroked?" the cat responds with his signature haughty style: "Quick on the draw, this one. Quite right. Got to get something in return for having my sleep disturbed." When this cat is hit by a car, he crawls up to Satoru's silver van, hoping to be helped, and is rewarded not only with medical care but with a home, too. Satoru takes the cat in and names him Nana — seven in Japanese — because of how his tail crooks to one side and looks like that number. The pair live together happily for a few years before, due to unforeseen circumstances, Satoru is forced to try to find a new home for Nana, and sets off on a series of brief road trips to visit friends and loved ones from his past.

Satoru first visits a childhood friend, Kosuke, whose wife has recently moved back in with her parents. It is during this chapter that we switch out of Nana's point of view — he narrates about half the book — and into an omniscient narrator who tells us about the boys' friendship and how they bonded with a cat called Hachi (which means eight) when they were both in elementary school. Soon after, though, during a school trip, Satoru was called home — his parents had both died in a tragic accident, and he was forced to move in with a childless aunt who couldn't take Hachi in as well.

The second friend Satoru visits is Yoshimine, now a farmer. Yoshimine and Satoru have been friends since their junior high days, where they were both new students who'd moved to the district due to family difficulties — Satoru's parents died, and Yoshimine's were both so busy with work that they sent him away to live with his grandmother. The third visit Satoru makes is to a couple he's been friends with since high school and university days, Sugi and Chikako. He once had a crush on Chikako, but Sugi, in love with her himself, begged Satoru to keep his crush to himself.

I found myself sobbing through the last 40 pages or so, unable, unwilling, to let this joyful little book go. I doubt many readers — as cynical and hardened as they may — will get through it dry-eyed themselves.

None of them — Kosuke, Yoshimine, Sugi and Chikako — are a good fit to take care of Nana, for a variety of reasons, all of which Nana contributes to, not wanting to be left behind. He's a proud cat, but he's loyal and loving. On a ferry trip, when he's forced to stay in an animals-only room, Nana is shamed by the other animals, accused of being pampered because of how often Satoru visits him, asking if he's lonely. Until, that is, a chinchilla cat tells them all to shut up: "Don't you understand? It's his master who's the lonely one?"

Indeed, Satoru is the lonely one, but with Nana by his side, it appears he can muster up the energy for one last tour of Japan, one last meeting with beloved friends. At each turn, in each history of friendship revealed to us readers, it's clear that Satoru has always been a cheerful person, despite his hardships. He's been loving and attentive and has always tried to do his best for those around him. He is a study in kindness, a true cat fanatic — as Nana correctly identifies him — and his story winds to an end in a beautiful, loving, heartbreaking way. I found myself sobbing through the last 40 pages or so, unable, unwilling, to let this joyful little book go. I doubt many readers — as cynical and hardened as they may be — will get through it dry-eyed themselves. And you know what? Sometimes a good happy-sad cry is just what the doctor ordered.