Accessibility links
What Is A Nationalist In The Age Of Trump? "America First" has been a Trump mantra for years. The suggestion that the U.S. has been fleeced by foreigners has been his appeal to all those who find talk of "globalism" unsettling or threatening. 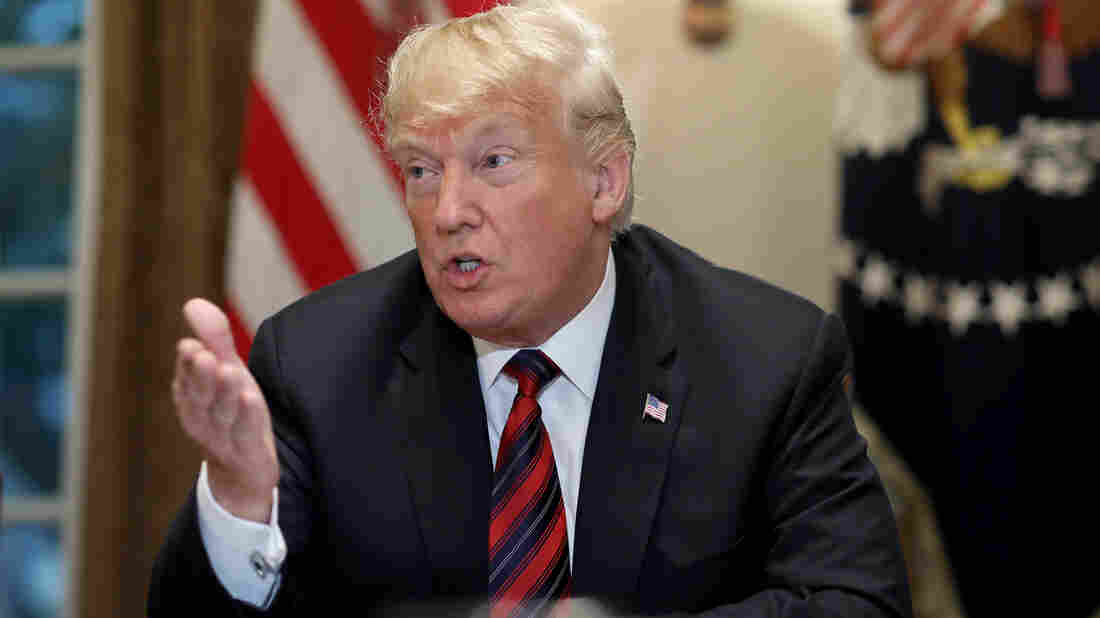 President Trump answers questions during a meeting with military leaders in the Cabinet Room on Tuesday at the White House. Win McNamee/Getty Images hide caption 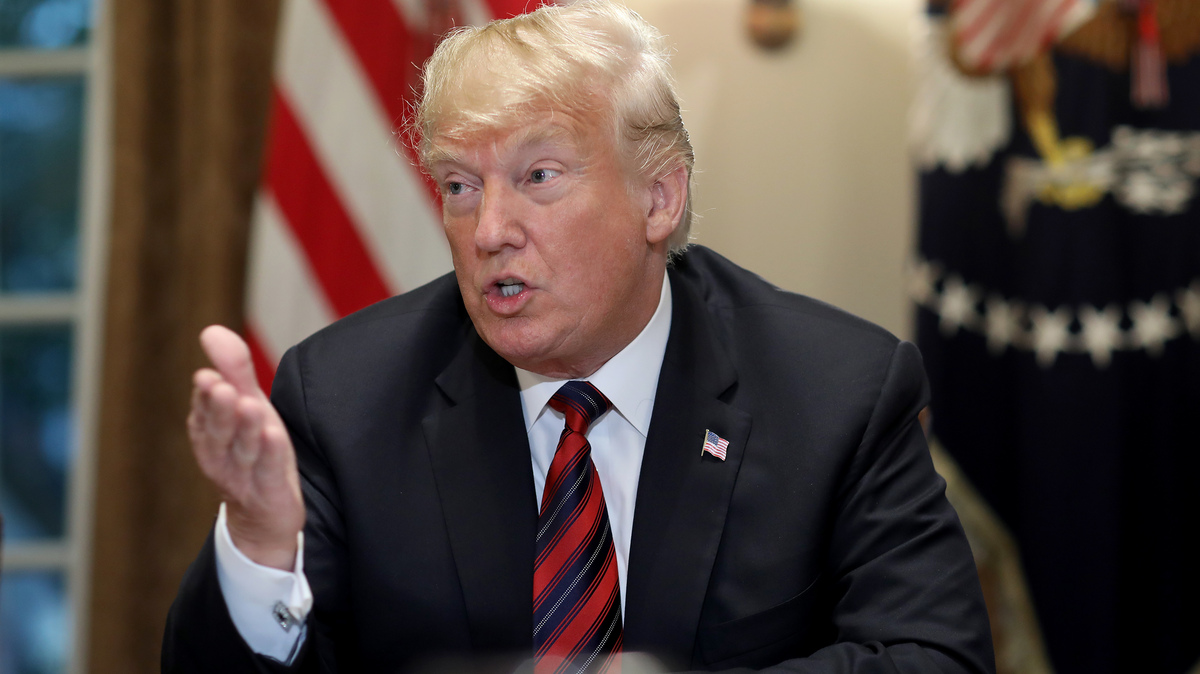 President Trump answers questions during a meeting with military leaders in the Cabinet Room on Tuesday at the White House.

We are about to have a national conversation about the word nationalist.

A word in more or less everyone's vocabulary has suddenly become a flashpoint because, well, because it was claimed by President Trump during a stump speech in Texas on Monday. That alone means people are likely to argue about it.

But the president said Tuesday he was a "proud" nationalist, and he used it to contrast himself with previous presidents who negotiated trade deals, arms agreements and immigration laws — all of which involve the interests of other nations in addition to our own.

Trump has made it his business to repudiate all of the above. He often recounts how he has complimented leaders of Japan and China and other world powers on their pursuit of their national interest. We should be more assertive about serving our own, he says.

"I love our country," he said, explaining his remarks Monday night in Houston, "and our country has taken second fiddle."

Other countries, rich as well as poor, are taking advantage of the U.S., Trump said. They got the better of trade and paid less for the common defense, he said.

"All I want is for our country is to be treated well, to be treated with respect, so in that sense I'm absolutely a nationalist, and I'm proud of it," Trump said.

There is nothing new in any of this. "America First" has been a Trump mantra for years. The suggestion that the U.S. has been fleeced by foreign partners and competitors alike has been central to his appeal to all those who find talk of "globalism" unsettling or even threatening.

But there is something here to be discussed, because Trump is highlighting this word at this moment, with the midterm elections less than two weeks away. And he is spotlighting the word as he presses for his wall on the southern border and provokes fears of foreign invasion by villainizing the caravan of migrants making its way across Mexico.

In one sense, it shouldn't be controversial for a president to call himself a nationalist. The leader of the nation would more or less be expected to believe in its identity, its values and its inherent worth.

The word has plenty of seemingly neutral uses. Baseball has a National League. The major leagues of football, basketball and hockey have the word in their names. We go to national parks. There used to be something called National Public Radio, now known simply as NPR.

But the word nationalist has connotations other than simply embracing all 50 states and the District of Columbia. It has too often been associated with far more divisive attitudes. Trump was asked in the Oval Office on Tuesday about the meaning of white nationalism. He claimed never to have heard of that usage. Apparently, no one asked if he had heard of black nationalism, which has also been a thing.

White nationalism is generally regarded as the attitude that only Caucasians should be considered part of the American nation, that the racial and even ethnic roots of the Colonial settlers and 19th-century immigrants define the proper meaning of the nation. That idea has long been part of the American mix, personified by the Ku Klux Klan and American Nazis but also embraced by other groups both organized and unorganized.

Certainly in many other countries, nationalism is closely associated with one language, one culture, even one ethnic group or one religion. That simply has not been the American story. Even in the early 1600s, the people within the Colonial borders were multiracial, with hundreds of thousands of Africans among the earliest to cross the Atlantic — nearly all of them as slaves.

So using the word nationalist can be taken to refer to the distinctly American idea of a melting pot of races, ethnicities and faiths. But to some, it is too close to the more racist or ethnocentric usage to be comfortable. Much depends on how a particular speaker uses the word. Is it meant to express inclusion or to imply the opposite? 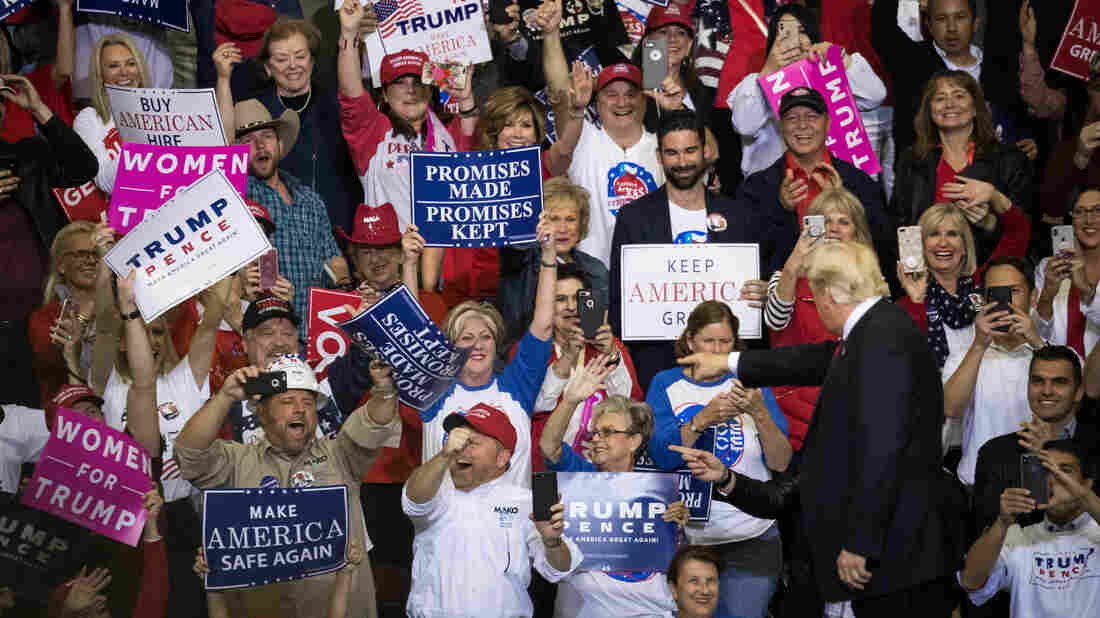 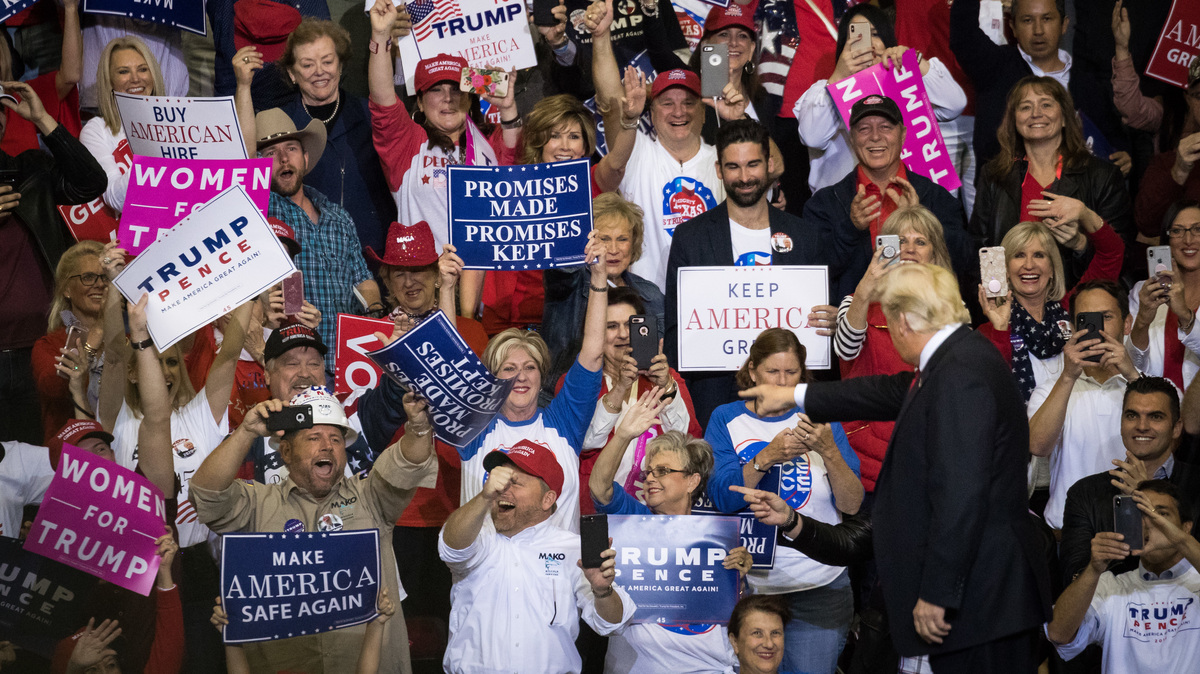 Supporters cheer as President Trump takes the stage for a rally in support of Sen. Ted Cruz, R-Texas, on Monday in Houston.

Scholars have tried to trace the roots of nationalism as a word and found it in printed form as far back as 1798.

For generations the word was used interchangeably with patriotism, which is to value and love one's country and feel loyalty to it. But patriotism, at least in the dictionary, does not imply a belief that one's own country is superior to others.

Those who believe in their country's superiority are sometimes called chauvinists, a name that may have originated with the story of a French soldier named Chauvin who was so blindly loyal to Napoleon that he went on defending "The Emperor" long after his downfall. The word in our time is more often used to refer to attitudes of gender superiority among men ("male chauvinism").

And then there are those who carry their nationalism a step further, believing that their country's superiority implies a need to impose their national will on others through military coercion.

A popular term for that is jingoism, derived from a British music hall song in the 1870s. The lyrics said the Brits didn't want to fight anybody (the Turks at the time) but if they had to "by jingo we will." The word jingo was perhaps a mild form of an oath, the equivalent of the way Americans say "jeez." Thereafter, the word was often used to refer to overeager militarists and the "ism" followed after that.

Jingoism has had periodic revivals in American usage during debates over military action, as in the Cold War era and more recently in the war on terrorism and the incursions into Iraq and Afghanistan.

In any event, these more derogatory ways of describing extreme nationalism have served to keep ordinary nationalism relatively benign — at least in general use. All kinds of people can say they are nationalists, that they value the U.S. (or their own home country) and wish to promote its success in the world.

However, when the word is attached to other attitudes, impugning the motives of other countries by contrast or proclaiming a sense of victimhood, then nationalism raises warning flags. It becomes an attitudinal pretext for a more aggressive foreign policy.

Or, at least, that has been the experience of Europe and Asia, where wars have pitted one nation against another since nation-states first emerged.

From 'Lyin' Ted' To 'Beautiful': How Trump And Cruz Found Political Love

How much of this might have been on the president's mind Monday and Tuesday is unclear. But he surely understands how associating himself with national pride and the defense of American interests has appeal for voters.

And the president probably knows the inevitable blowback from his detractors is only likely to heighten that appeal.