Accessibility links
Interest In Shady Politicians Is Soaring. Can 'House Of Cards' Match It? Robin Wright's character Claire Underwood ascends to the presidency in the series' final season. But the story arc has already begun to run out of steam, says critic Eric Deggans. 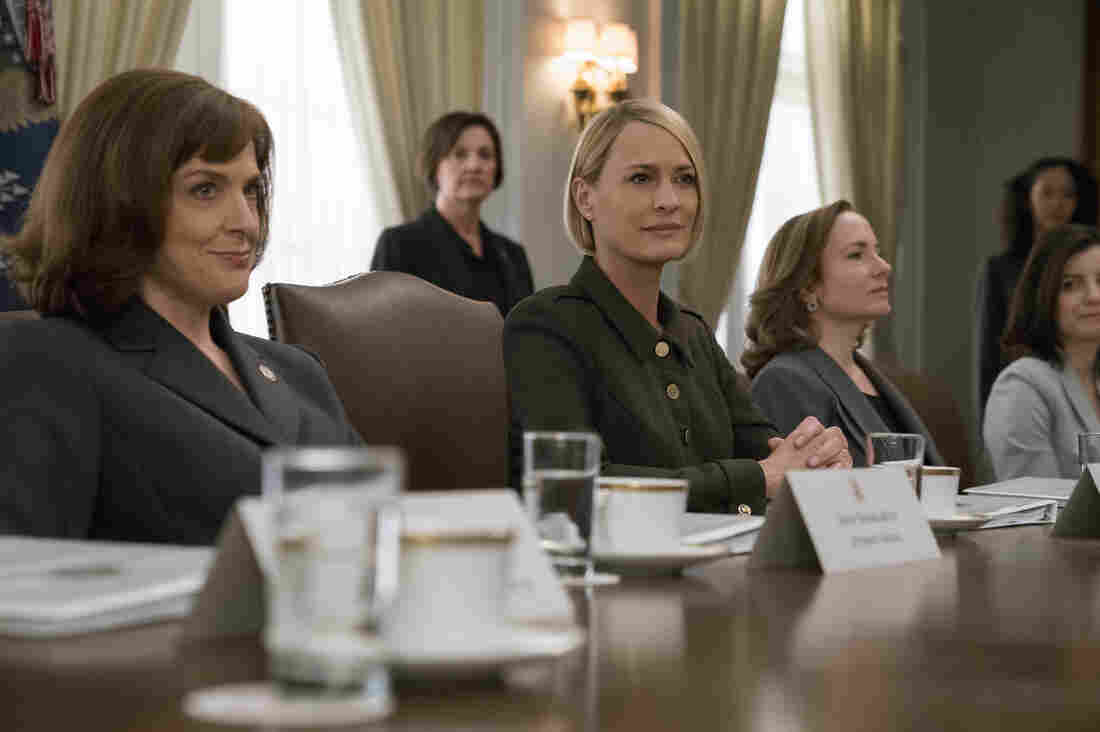 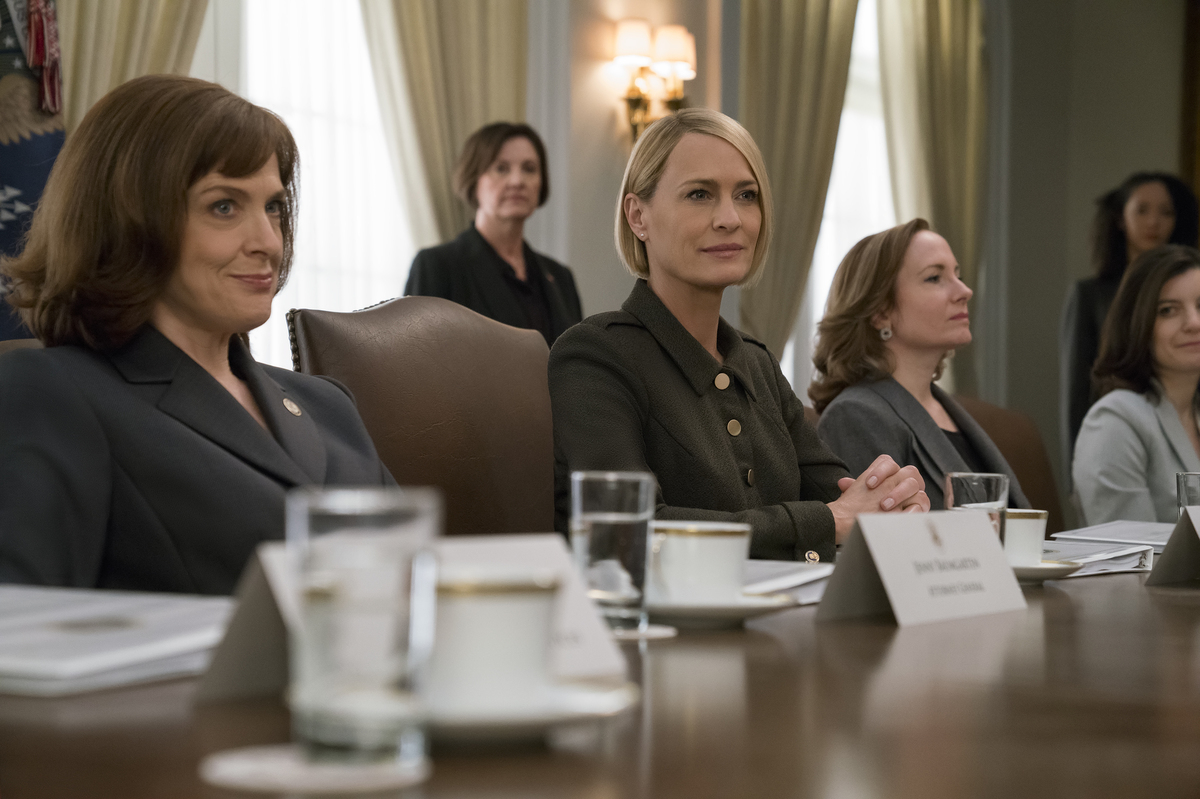 Robin Wright's character Claire Underwood (center) ascends to the presidency in the final season of House of Cards.

Note: Spoilers abound for the upcoming and past seasons of House of Cards.

I wish I could say definitively that the #MeToo-fueled elimination of star Kevin Spacey from Netflix's House of Cards raised the political drama's game for its final season.

Programs such as NBC's Today show actually got better when sexual harassment allegations forced out male stars and talented women stepped up. And the tart line showcased in one of the teasers for House of Cards' new season — "The reign of the middle-aged white man is over" — promises an onscreen rebellion that could send the show out on a high note.

But House of Cards was already winding down when sexual harassment and assault allegations against Spacey emerged, eventually prompting Netflix to fire the actor and complete an eight-episode final season without him.

What I've seen of the new season falls short, mostly proving that the show is ending at the right time. Paradoxically, it's running out of narrative steam at a time when interest in shady, power-hungry politicians couldn't be higher.

Without Spacey, the show does have space to focus on a character I always wanted to see more of: Robin Wright's Claire Underwood. Wife to Spacey's Frank Underwood, Claire became president last season as her husband resigned the office to engineer a presidential pardon for his crimes. In the final moments of Season 5, as she ignored calls from Frank, she turned to the camera and said "My turn" — at a time when neither Wright nor the show's producers knew just how prophetic those words would be.

But the first five episodes of the final season reveal just how tiresome the show's machinations have become. Frank is dead; officially, he died of natural causes, but this is House of Cards, so suspicions abound. As Claire attempts to assert her vision as president, she must contend with all the people — mostly wealthy, middle-aged white men — who now hope to control her.

That patriarchy is personified in Greg Kinnear's Bill Shepherd, a hard-nosed, conservative businessman who seems a bit like a telegenic Koch brother. He runs a powerful, family-controlled conglomerate with his sister Annette, played by Diane Lane. Much of this season's first five episodes are devoted to the Shepherds' attempts to force Claire into doing their bidding, in the same way men — and women who have bought into patriarchal thinking — have tried to control her over her entire life.

It sounds like a compelling story, but Claire remains an icy, tough-to-read cipher through much of it, despite flashbacks to her childhood and that fourth-wall-breaking, talking-to-the-viewers thing that Spacey once did so well.

Frank savored his antiheroic shenanigans so much, there was a voyeuristic thrill in watching him; Claire still keeps the viewer at a distance. And her constant fight to escape Frank's shadow cedes much of the spotlight to a dead character no longer on the show.

One problem with House of Cards' return is its timing. Scheduled to drop Nov. 2, days before a hotly contested midterm election, this show features an array of Washington power brokers working to disguise their shady machinations from the public eye. In real life, however, the dysfunction of the Trump White House seems an open book, with new scandals erupting in the press or from the campaign trail every day.

That brings up the most unrealistic thing about House of Cards. (No, it's not the murders and various assaults both Frank and Claire have personally committed, though that stuff comes close.) It's this political drama's decided lack of partisanship.

Often it's difficult to keep track of which party various House of Cards characters are affiliated with — though Frank and Claire have always come across as a fun-house mirror reflection of Democrats and the Clintons. But partisanship fuels everything in real-life politics, which has always made House of Cards feel a bit like a dark fantasy where America's biggest problems are unscrupulous politicians of every stripe — not the tribalism and propagandizing that destroys consensus on the most basic facts across party lines.

The performances here are wonderful, especially Kinnear as controlling power broker Bill Shepherd and Lane as Annette Shepherd — whose rivalry with Claire is tangible and toxic. I've only seen the season's first five episodes, so it's possible the story may take flight later.

As a longtime fan, I'm still hoping the show's producers will pull together all the confusing and competing storylines here to give us a portrait of Claire that lives up to House of Cards' legacy as a once-groundbreaking series. The nation's first female president deserves no less.