Accessibility links
In The Land Of Dracula, Witches Work As 'Life Coaches' Of The Supernatural In the U.S., we tend to only hear about witches on Halloween, but in Romania, they have year-round work. Mihaela Minca, who has been practicing magic since age 7, is a third-generation witch. 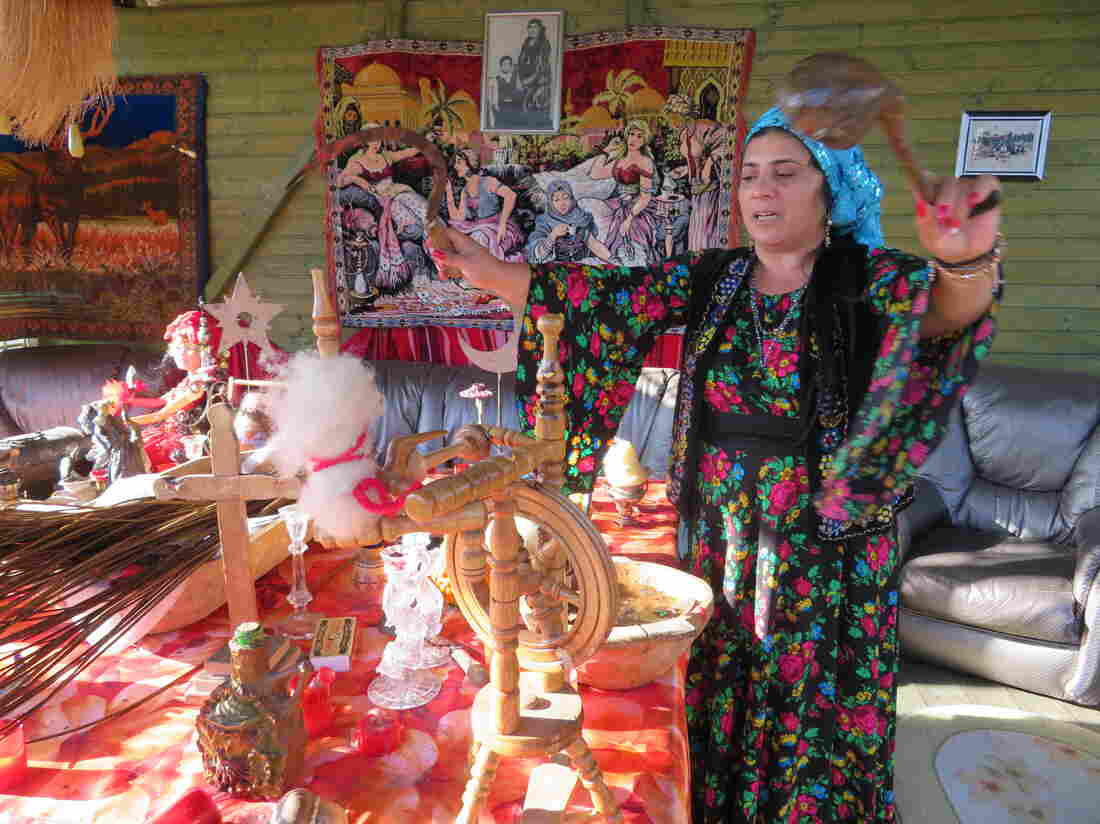 Magic "is beautiful and dangerous — it is a fight between good and evil," says third-generation witch Mihaela Minca. A 2014 survey found that in Romania, one in five people believe witches have powers. Joanna Kakissis for NPR/NPR hide caption 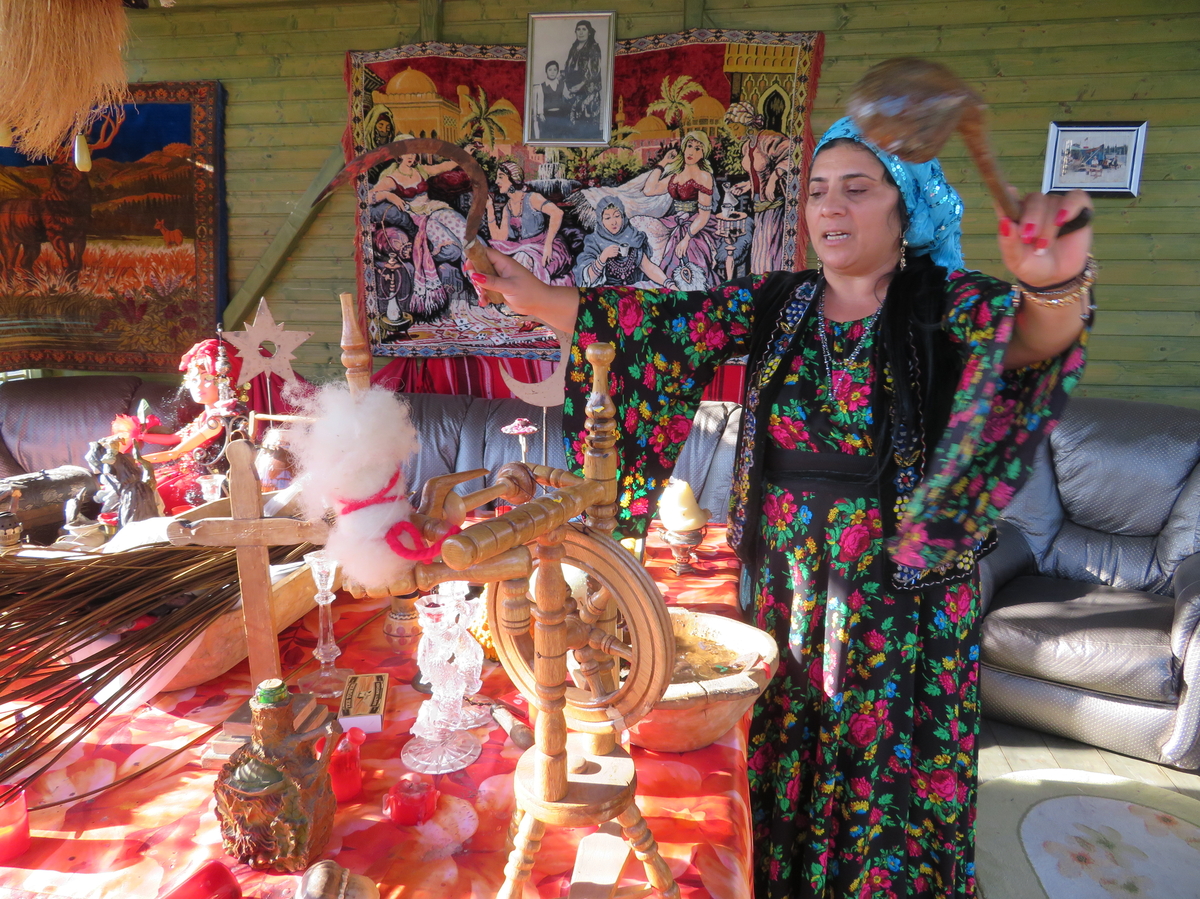 Magic "is beautiful and dangerous — it is a fight between good and evil," says third-generation witch Mihaela Minca. A 2014 survey found that in Romania, one in five people believe witches have powers.

The witch lives in the suburbs of the Romanian capital, Bucharest, in a busy village with a Renaissance palace.

There's a poster of her outside her house in Mogoșoaia: "The most powerful witch from Europe," the poster reads, "Mihaela Minca."

"Welcome, welcome!" she says, emerging through a beaded curtain at the front entrance. She's in a floor-length, black dress with bright flowers. Her hair, also black, is pulled back in a baby-blue headscarf.

"I can solve any kind of problem — with love, success, anything," she insists, leading us to a dining room with gold-painted chairs that resemble thrones. "I am a witch who gets results."

What The Real Witches Of America Eat

Minca, 42, says she's been practicing magic since she was 7. Both her mother and grandmother were witches. In the U.S., witches are usually only spotlighted on Halloween. But in Romania, witches have year-round work. A 2014 survey showed that two-thirds of people "believe in demons, curses, enchantments and spirits" and that one in five believe witches have powers.

"It's not up to me to convince people to believe in magic," she says. "My tarot cards tell me when I can help someone and when I can't. Sometimes people need to go to a doctor or a priest. Some people aren't affected by magic at all."

Fatalism runs deep in eastern Europe, with its history of occupation and communism.

"People do not believe they can control their own lives, that a lot of what determines their success comes from luck rather than their own initiative or agency," says Dani Sandu, a Romanian sociologist and researcher at the European University Institute in Florence.

He compares witches to modern-day life coaches. "They commercialize the feeling of being in control of one's life and one's destiny," he says.

Mihaela Minca's phone buzzes constantly with clients who, she says, feel like they've been "trampled by fate." She works in person, on the phone and online. She explains that her clientele is diverse — "regular people, rich people, politicians" — and most want love, health and financial security.

Others have darker requests.

"There are customers who ask me to split up couples," she says. "They ask me to destroy people. And there are several spells I can do with black magic. But I learned from my grandmother that too many evil spells will always turn against a powerful witch."

Magic, she says, "is beautiful and dangerous — it is a fight between good and evil."

She gives an example. "Sometimes you have to cut out a demon inside a person," she says.

With a spell, of course, not the knife in her hands, which she's using to cut up tomatoes, smoked ham and sheep cheese for what she calls an "interview snack."

She explains that she also teaches magic — but never to men.

"Men don't have the discipline ..." she says. "They are distracted by everything."

Women, she says, can stick to rituals. It's the women who keep magic alive.

But witches have also stirred controversy. Some have even been sued for blackmail here.

In 2011, a soap-opera actress, Oana Zavoranu, claims she handed over more than $500,000 in cash and property to two witches who promised to help her with her divorce. The witches Zavoranu hired threatened to expose her personal life unless she kept paying.

A 'Witch Queen' Who Casts Her Spells Year-Round

The same year, Romanian witches made international headlines for hexing politicians who tried to tax them and regulate witchcraft.

Some witches threw poisonous mandrake into the Danube River. Minca's mother-in-law made a potion out of cat poop.

The politicians dropped the tax.

"I want to pay taxes," she says. "Being taxed would prove that this is a respectable profession. My daughters finished high school. I'd love it if they could open their witches' offices in Bucharest."

Like most witches in Romania, Minca is Roma, a stigmatized and often impoverished minority in Europe. Magic, she says, supports her husband and three kids. It's allowed them to build a house in their village, Mogoșoaia, and live for a time in Los Angeles, where she has many clients.

"I've even got an award in Los Angeles," she says, showing me a teardrop-shaped glass statuette from the International Council of Witchcraft. "Excellence in the Art of Wizardry," it reads.

"I'm very proud of that," she says, with a movie-star smile.

We walk outside to her huge backyard. Chickens strut past us. She points to a partially-constructed building next door.

"I want that to become a school for witches, with state-approved certificates and everything," she says. "It would be right next-door to my office."

She points to a gazebo covering a long wooden table filled with crystals, scythes, horseshoes, bells and dried herbs.

She performs her spells here, and I wonder how much they cost. Like, how much would it cost to put a curse on my editor? ($600!) She laughs. "Let's try something else," she says.

She raises a bell, pours water into a bowl and chants:

"I remove all evil spirits! Let them go down a stream on old forgotten stumps!" she declares, ringing the bell as she circles the table. "Let there be luck, let there be peace, let there be happiness! God bless, let it be so!"

A previous Web introduction to this story incorrectly said that Mihaela Minca hasn't paid taxes since the Romanian government backed down when she and fellow witches threatened to hex tax collectors. In fact, it was Minca's mother-in-law who hexed the tax collectors.