Accessibility links
Migrant Caravan Top Of Mind For Voters Thousands Of Miles Away In Tennessee Tennessee has one of the fastest-growing immigrant populations in the country and immigration has become wedge issue in the closely watched race for an open senate seat. 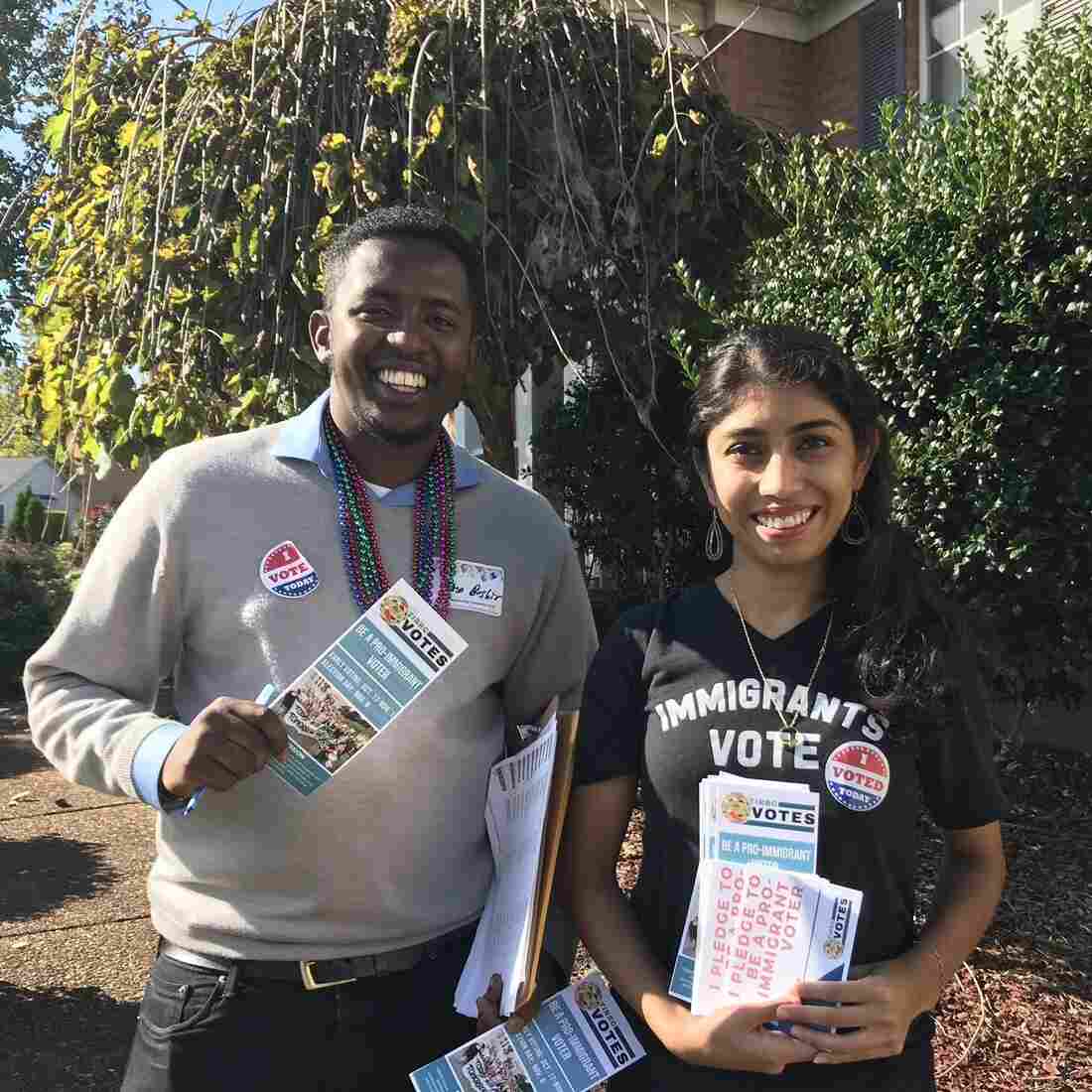 Volunteers Kayo Beshir, left, and Jazmin Ramirez, right, knock on doors in Antioch, Tenn., in an effort to get pro-immigrant voters to the polls. Joel Rose/NPR hide caption 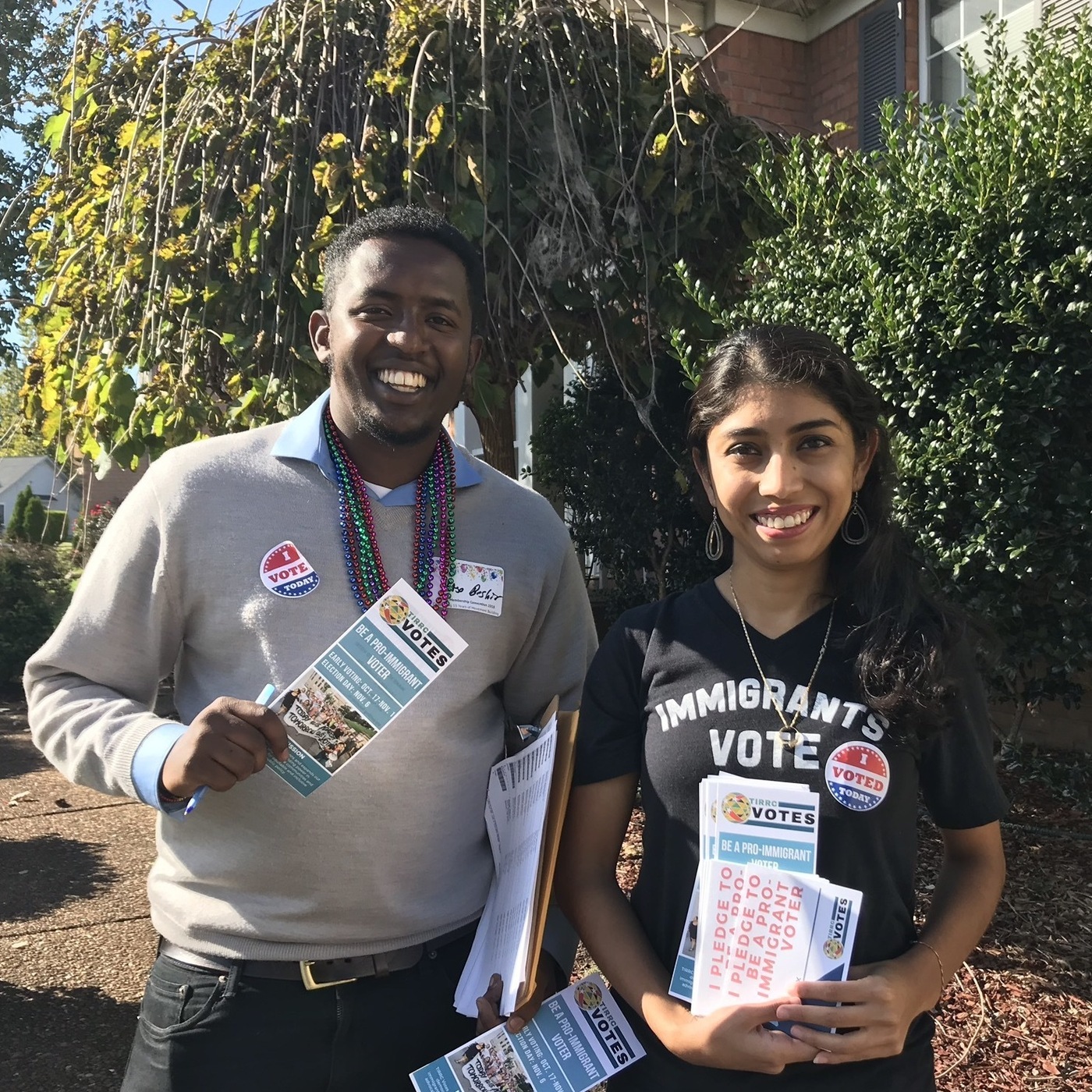 Volunteers Kayo Beshir, left, and Jazmin Ramirez, right, knock on doors in Antioch, Tenn., in an effort to get pro-immigrant voters to the polls.

The caravan of migrants making its way across Mexico may be thousands of miles from Tennessee. But it's not far from voters' minds.

"That's one of my deepest concerns," said James Harrell of Shelbyville. "We have no idea who these people are, what countries they're coming from."

Early voting has already started in Tennessee, and turnout is high. There's a steady stream of voters at the county courthouse in Shelbyville, a small town about an hour south of Nashville that's seen a big influx of immigrants. And many voters here say illegal immigration is one of their biggest concerns.

"There have been people who have been hurt and killed because of illegal immigrants that have come into this country," said voter Dottie Mershon. Other voters told me they're worried that immigrants are taking benefits and jobs away from U.S. citizens.

"Our people are wanting jobs. Our citizens want jobs. And they're going to others," said Beth Campbell, the National Committeewoman for the Tennessee Republican Party.

Tennessee has one of the fastest-growing immigrant populations in the country and immigration has become wedge issue in the closely watched race for an open senate seat here.

In fact, the state issued driver's certificates to undocumented immigrants years ago. Bredesen ended the practice after he took office.

In recent years, Tennessee has passed some of the toughest anti-immigrant laws in the country. At a debate in Knoxville earlier this month, Bredesen insisted he's a border hawk — even if he doesn't agree with President Trump.

"I believe very strongly in controlling our borders," Bredesen said. "But I think there are much better ways of doing it than building a wall. I think the wall is just sort of political theater."

"Let me tell you something: Tennesseans want to see that wall built. Because open border policies have made every town a border state. And every state a border state," she said.

These are not new positions for Blackburn. She's been a longtime immigration hawk representing Tennessee in the house. Her critics say Blackburn and Trump are trying to exploit fears about immigrants, who are no more more likely to commit crimes than anyone else.

"Certainly, we think candidates like Trump saw what worked here in Tennessee, that you can make people think immigration is something to be feared, and you can win," said Stephanie Teatro, co-director of the Tennessee Immigrant & Refugee Rights Coalition, or TIRRC.

Teatro thinks voters need to know that immigrants have helped to fuel Tennessee's economic growth. So her organization created a spin-off group called "TIRRC Votes" to train volunteers from across the state on how to get out of the vote.

Many of those volunteers are recent immigrants, and can't vote. But Teatro says they're trying to mobilize allies who think President Trump's immigration crackdown is too harsh. She says they've turned out by the thousands to protest in the last two years.

"We're reminding them, if you were angry about family separations, if you came out and marched with us when Trump signed the Muslim ban, we need you to stand with us again," Teatro said.

Several hundred volunteers gathered last weekend outside of Nashville. After the training session, volunteers fanned out across the city and its suburbs.

Kayo Beshir found himself knocking on doors in Antioch, Tenn., a diverse, working-class neighborhood in southeastern Nashville. Beshir was born in Ethiopia, and joined his father in Tennessee when he was 13. They're both citizens now. But Beshir says he still has to explain the importance of voting to his father.

"Many of us come from countries where human rights are not respected," Beshir said. "So votes don't matter. And very rigged elections. So too many of our parents don't understand the purpose of it."

But Beshir thinks his own generation doesn't need any encouragement to the polls. They get it.

Beshir hopes the immigrant community can make the difference in a tight election. If not this year, maybe next time.