Accessibility links
After Hurricane Michael, Voting 'Is The Last Thing On Their Minds' Election equipment is in fine condition, but voters face many hurdles in getting to the ballot box. 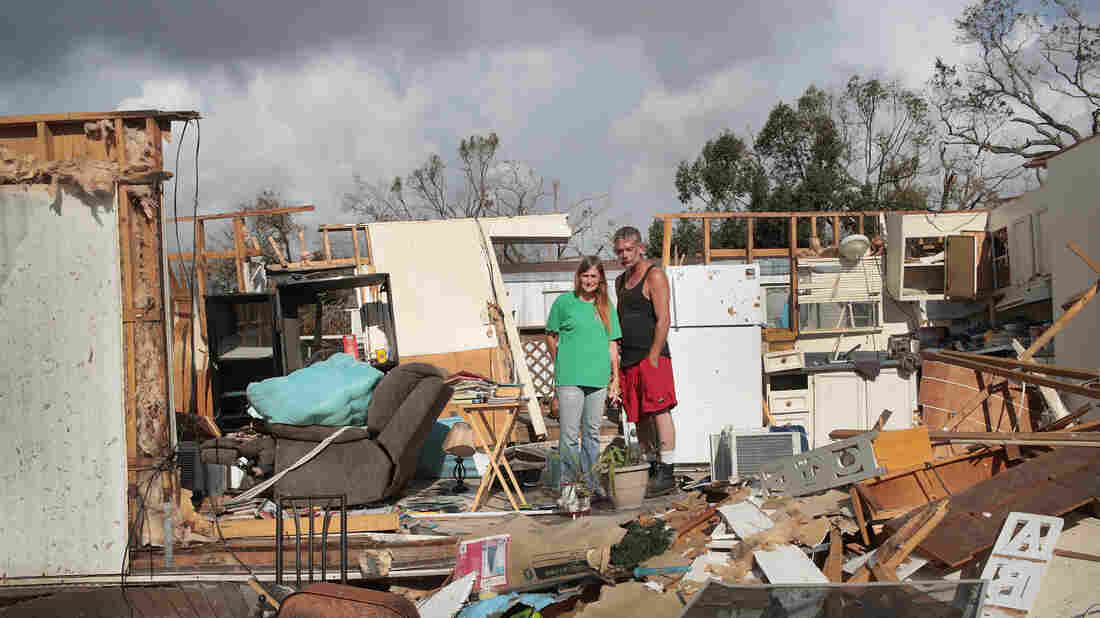 Cynthia Lamphier and Chet Bundy pose for a picture in the kitchen of the trailer home they were in when it was destroyed by Hurricane Michael. Scott Olson/Getty Images hide caption 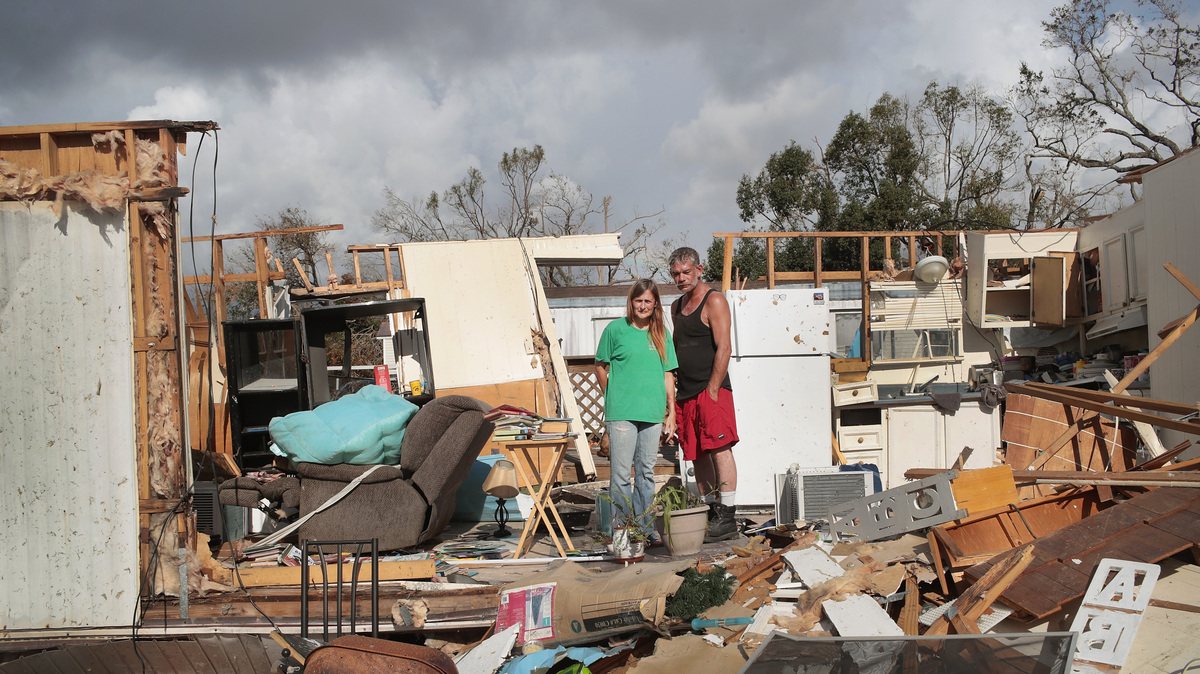 Cynthia Lamphier and Chet Bundy pose for a picture in the kitchen of the trailer home they were in when it was destroyed by Hurricane Michael.

As Bay County Supervisor of Elections Mark Andersen walks around the second floor of his office in Panama City, Fla., he points up at a makeshift ceiling of tarp and plywood.

"From that wall right there, all the way over, all the wood there, that all just got put on," he says.

Andersen is the supervisor of elections for Bay County, Fla., the county most ravaged earlier this month by Hurricane Michael. Andersen was in the elections office two weeks ago, one floor below this spot, when 130-mile-an-hour winds ripped off the building's roof.

"The walls were literally shaking, from the pressure. You could feel it in your ears, ears were popping, and then whoosh, [the roof] was gone," Andersen said. "Five or ten minutes later, it started raining inside... Like a faucet."

Andersen, a retired Navy Seal, and his IT manager spent six hours using folded up plastic signs as makeshift shovels to push water out of the building, as a fire alarm begged them to evacuate.

The worst leak was in the building's server room, which houses all of the county's voter data.

As Andersen walks into the room now, he points at a working desktop computer, and a bunch of blinking green lights.

"Those servers that are at the top, we took out, we blew everything out, dried everything, and let it all sit on the sidewalk for eight hours a day for the first two days [after the hurricane]," Andersen said. "We put them back in there, crossed our fingers, and we're going."

In fact, although the building his staff is working in is without a roof and carpet, and boasts a stale wet smell, Andersen says none of Bay County's voting equipment was damaged. 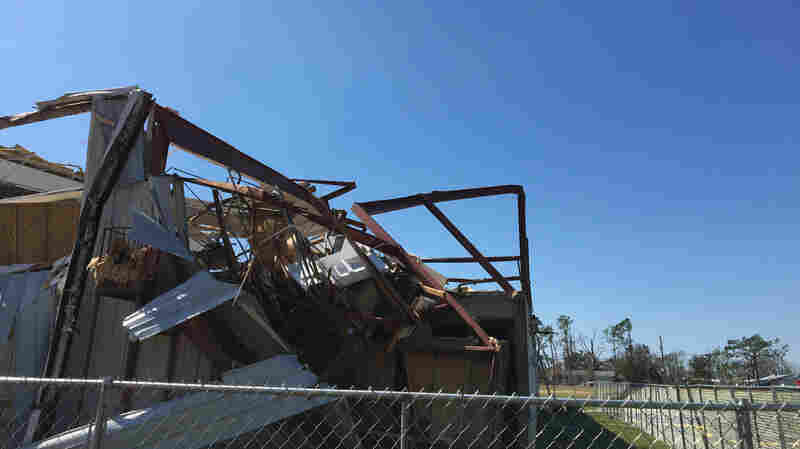 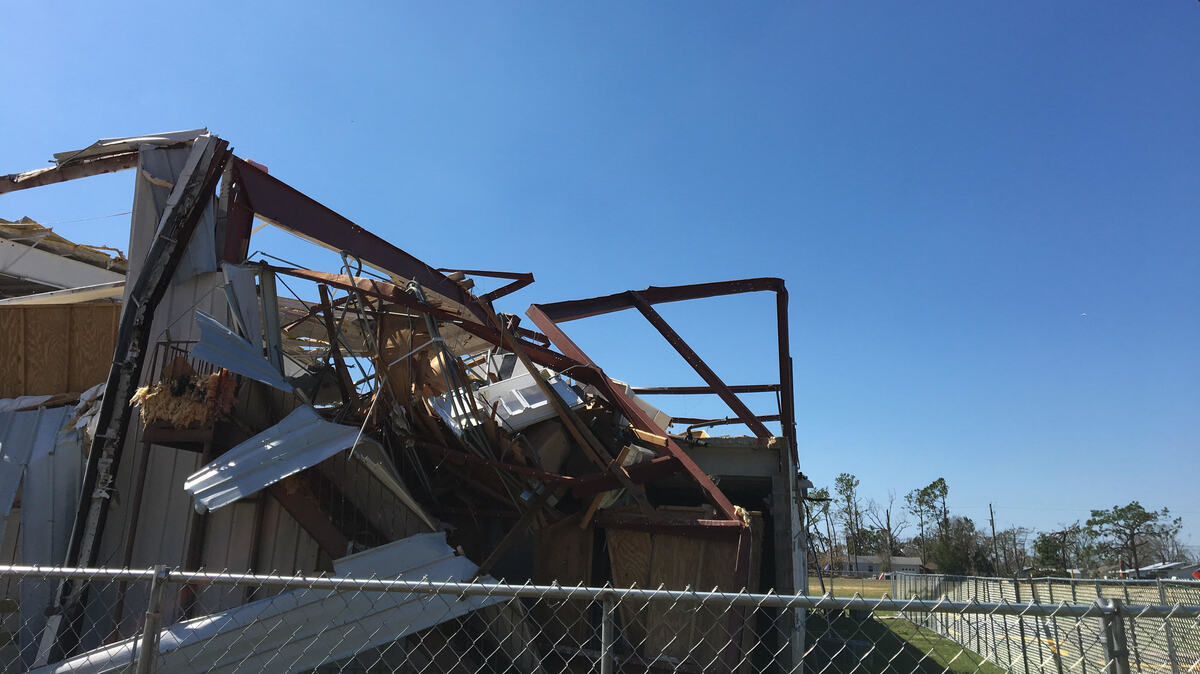 A building next door to the Bay County elections building sits demolished.

Florida Secretary of State Ken Detzner said in a statement last week that his office had received no information about damage to any voting equipment in any county in Florida.

But there will still be major disruptions for voters in counties affected by the storm, and those disruptions could be felt in meaningful ways in a state famous for razor-thin election margins.

In Bay County, for instance, instead of going to one of 44 assigned precincts, as was the plan communicated to voters pre-storm, voters hoping to vote in person will go any of five "mega polling centers."

Governor Rick Scott issued an executive order last week that allowed voting supervisors in Florida's hardest-hit counties to adjust on the fly. The order allows election supervisors to extend early voting, and allows vote-by-mail voters to have their ballot mailed to a different location than their home address.

There will be ways for voters to vote, but it will be harder. And at this point, with so many voters still wading through destruction, maybe not so important.

Michael's Effects On Florida Could Include The State's Elections

Michael's Effects On Florida Could Include The State's Elections

Robert Montjoy, a retired professor at the University of New Orleans, studied the election process in Louisiana after Hurricane Katrina.

"Whether casting a ballot becomes a higher priority than cleaning out the basement, visiting someone in the hospital, or all the other demands...You certainly expect a lower turnout for those reasons." said Montjoy.

In a lot of places, that lower turnout maybe wouldn't matter on a national level — but Florida isn't one of those places.

This year's election features a governor's race, which will decide who oversees redistricting in the state, as well as who picks three judges on the state's supreme court. It also features a U.S. senate race that will play a crucial role in deciding which party controls Congress.

"Florida once again looks again like it's headed towards a one percent margin of victory election in both the governor's race and the U.S. Senate race, " said Susan MacManus, a politics professor at the University of South Florida. "In fact, the last four elections, two governor's races, and two presidential, that's been the margin of error — one percent."

She said the areas affected by the hurricane are traditionally some of the most solid counties in the state for Republicans.

A Look At The Political Impact Of Hurricane Michael In Florida

A Look At The Political Impact Of Hurricane Michael In Florida

"Those counties along the panhandle often have the highest turnout rate of any counties in the state," MacManus said. "It goes back to the fact that rural voters seem to be more inclined to vote as a civic duty."

If voters there turn out in lower numbers because of the storm, it could hurt governor Scott, who is running for senate, and his fellow Republican Ron DeSantis.

Salvation Army worker Rudy Zapata said he thinks that's exactly what is going to happen. Zapata had just served his 1400th meal of the day out of a food trailer parked alongside U.S. Route 231 outside Panama City.

Zapata traveled to Florida from Lubbock, Texas, and had been serving thousands of meals for the past week to people who had trees through their roofs, or who didn't have a home left standing at all.

"The way I see it," Zapata said, "the election right now is the last thing on their minds."