Accessibility links
Getting Too Old For Narnia In 'Light Between Worlds' Laura Weymouth's new novel follows two sisters struggling with the aftermath of their adventures in a magic land. That struggle is the vivid heart of the book, but its Narnia-lite doesn't quite work. 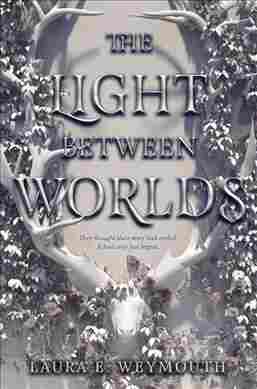 The Light Between Worlds

World War II is long over, but Evelyn and Philippa Hapwell are not getting on very well. During the Blitz, they were transported somehow to the magical Woodlands, where a great stag kept the peace and mythical creatures lived in harmony with nature. And there they stayed for years, leading the fight against an invading army. But when they had made the Woodlands safe again, they were sent back to London, children once again.

They try to adjust to normal life, but it proves very difficult, especially for Evelyn, who was young enough when it all happened that she feels like the Woodlands are her true home. She won't give up hope that one day, she'll be called back again, and struggles to connect with anything in the life that she's living.

Philippa, exhausted from the task of trying to rebuild her own life while simultaneously lifting Evelyn out of her depression, moves to America — and in her absence, Evelyn drifts further into melancholy, unable to stay moored. When she goes missing, Philippa returns to put the pieces back together and figure out what happened to her little sister.

Once a king or queen of Narnia, always a king or queen of Narnia. This phrase is embroidered on my heart, like it is upon the hearts of so many of us who grew up in love with Aslan, Mr. Tumnus, the White Witch, and all the rest. I fell for the stories of C.S. Lewis when I was very young — so young I couldn't read the books myself yet — and held many whispered, one-sided conversations pressed up against the back walls of closets.

Lev Grossman: A 'Magician' Grows Up

Anyone who knows that feeling of being in love with a fantasy world as a child can understand the longing that Evelyn feels for the Woodlands. Who of us has not imagined what it might be like to step through into that other world, and then lose it again? Through this thread of understanding, Evelyn's half of the story becomes all the more poignant. We see a young woman so deeply depressed that she's barely tethered to the world around her. It's a heart-wrenching depiction of depression, and at times, I wondered if perhaps there might be some moment where we discover that the Woodlands were not real, but rather some sort of war-induced PTSD.

Who among us has not imagined what it might be like to step through into that other world, and then lose it again?

Wisely, I think, that moment never comes. And in the second half of the book, we see the other side of the mirror — Philippa's struggle to move forward with life when her sister refuses to move with her. We watch her unravel as the faces the consequences of the hard decisions that she's made, and hold our breath as she tries to make sense of it all. I was deeply struck by the beauty of her efforts.

These very realist family struggles are the vivid heart of the book. Where it falls a little short is in its imagining of the Woodlands. Narnia is not public domain, so some other world had to stand in, and therein lies the problem. In creating something that is meant to remind us of Narnia but be different enough to avoid copyright infringement, The Light Between the Worlds had a very difficult task, and ultimately, the Woodlands feel a bit like Narnia Lite.

And there's another problem with going back to Narnia as an adult: It becomes impossible to ignore the racism and sexism in C.S. Lewis's work. The Light Between the Worlds has attempted to sidestep these elements, but the undertones are still there, especially as the force invading the Woodlands can't help but echo the invasion of the racially problematic Calormenes, one of Lewis' most egregious offences to a modern reader. I can well understand the desire to not engage with this, and I'm honestly not sure there's a good way to do it without having that be the actual purpose of the book. Perhaps it was better to not even try, but I just can't look away from it when I'm being asked to consider the real, human consequences of this world that looks so much like Narnia.

Upon reflection, I feel as though I am both the perfect reader and the worst possible reader for this book. I am so compelled by this story and by these sisters who have lived in another world and must find contentment in our own. I bring my own childhood longing to the table. But I also bring my own complications — the elements that made me feel that, as in the text, I had somehow grown too old and critical to dwell in my former adoration. It created a complicated set of feelings, and I am grateful for the opportunity to ponder them.