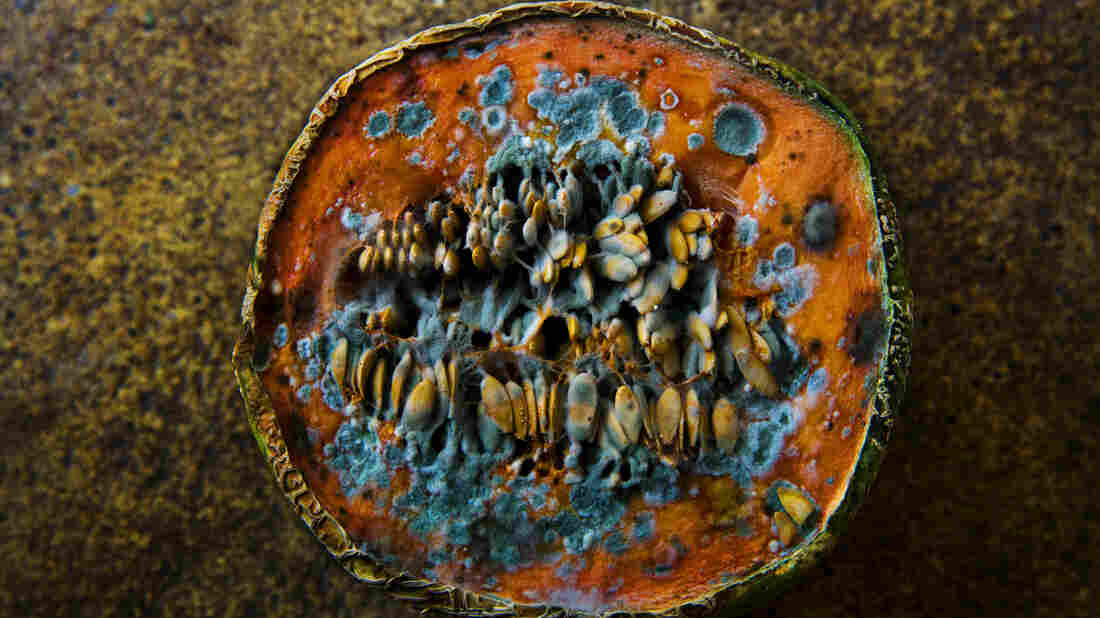 "A transformation is for me a much more interesting way to look at narrative than a 'story,' " Jenny Hval has said of her work. Barry Lewis/In Pictures via Getty Images hide caption 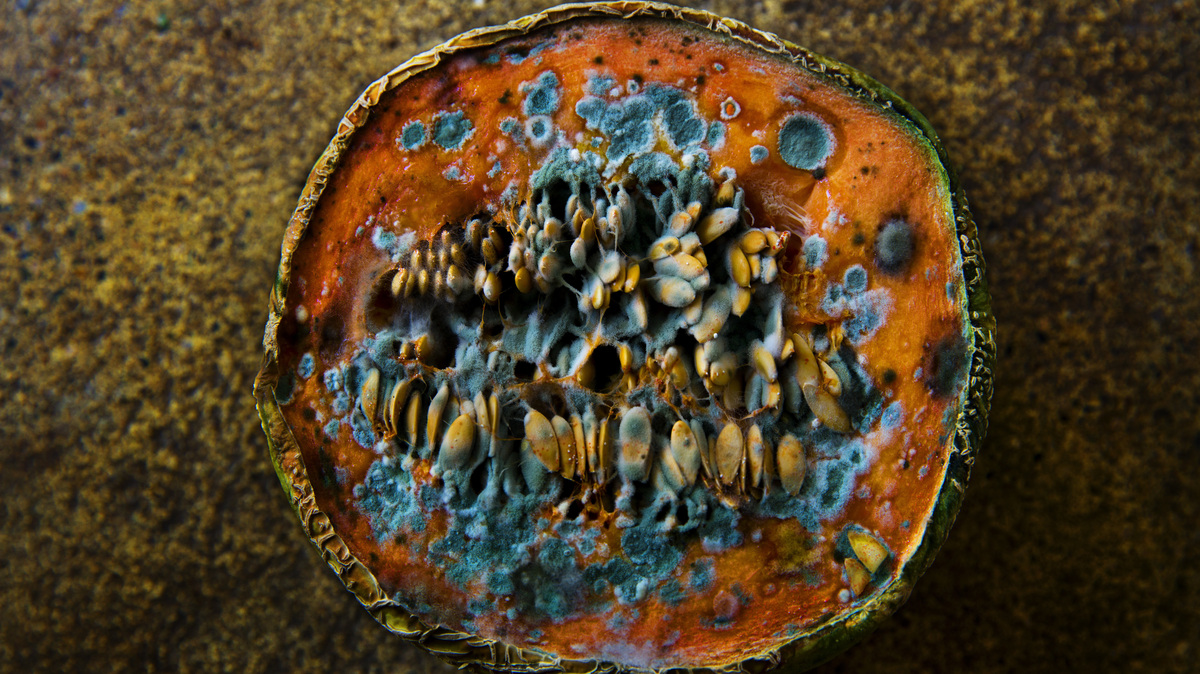 "A transformation is for me a much more interesting way to look at narrative than a 'story,' " Jenny Hval has said of her work.

Equally psychedelic (and Norwegian) is the author of Jo's life, Jenny Hval, a multi-disciplinary artist who has always loved investigating viscera in search of dampness and truth. Over the past 12 years, Hval has presented clammy wonderland after clammy wonderland, in albums and art installations that suggest her intense fascination with the lurid world of flesh, disentangling beauty from gore and vice versa.

Her music – rich, filmic, spectral and sinewy, as if Cronenberg's more operatic movies were for some reason re-scored by Björk — inveterately worships the body, in modes that can sound like prayer. In her songs, women appear in primal, exposed, surreal shapes: sometimes in moments of climax, sometimes pried open and into pieces, and very often in states of extraordinary rapture. ("I arrived in town... with an electric toothbrush... pressed... against... my... clitoris..." goes the first line of the first song off Hval's very first record under her own name.) As such, mucus, rot and pus; blood, spores, urine — all of it takes center stage in the ornate grotesquerie of her gluey debut novella. 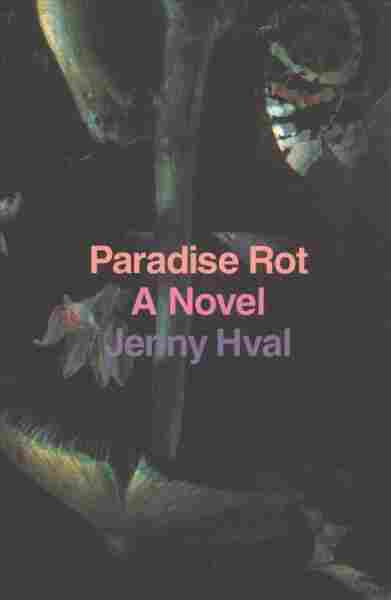 "When I went to America I found myself to be not myself," Hval recalls on "Holy Land," the sprawling closing track of her fifth album, Apocalypse, Girl. "I could not align with the landscape. It reminded me, my body, of being newborn." Rot opens on a similarly natal scene: Jo lands not in America but Australia, loaded with too much luggage, staring out of her hostel window as fog smothers the grey coastal hamlet. "There. Not there. There, not there," she hums upon her arrival in a coolly lyric voice, imagining herself "a new heartbeat" for her new life.

After a fruitless, weeks-long apartment hunt, Jo makes a funny friend in the older, lissome, chronically sleepy Carral Johnston, moving in with Carral after a brisk interview in the converted beer brewery she's made her home. (The place is "raw and porous," nightmarish and noisily alive.) Their shared living space spans a rancid, massive cube, all plasterboard and mezzanines with a thin fur of moss lining the floors, but nothing is half as monstrous and weed-like as Jo's lilting narration, running wild as her home becomes a slimy wonderland of psychosexual discoveries. It is, as Jo puts it, a "rotten, reeking garden of Eden" — not hell and not heaven, but an honest limbo where Jo's reality lives in jelly-like suspension.

Like the first-person mode so often used throughout Hval's art, Jo's voice feels partly like autobiography and partly like a proxy for women fighting the drifty feelings of dissociation in response to a world of vague, unnavigable sensations, like sexual preference or anxiety. Braising in the juices of her home — the runoff slimes, the milky emissions, the putrefaction of decaying food — Jo spends much of her time trying to compartmentalize away the mounting bizarreness of the world around her as half-hallucinatory visions threaten what's real and what's not. Like funguses, strangeness springs forth sui generis. Things decay and fall apart; certainty curdles. Bodies change with the suddenness of jump scares, mimicking the sometimes-monstrous shifts that occur during puberty.

"There's something in me that makes me ... lose control sometimes," Carral reveals at one point where her body seemingly disintegrates, softens into mush, and joins the squalor of their little universe. Like a riff on Helen Chadwick's "Loop My Loop," it begins when her hair falls clean from her scalp in large fistfuls, mixing into their flat's fleshy sludge "like peelings from a golden apple."

Unlike the work of magical realists like Bulgakov or Borges, the thrill in Paradise Rot is not in the characters' lack of acknowledgement of the vile and surreal, but in feeling Jo's eyes, like our own, widen in response to the unstable world both within and around her. Sex amplifies the feeling tenfold. The novel's liquid language – decomposed and viscous, as if pooled from the home's floorboards – gleams during the dreams and motions of desire. "Transformation is for me a much more interesting way to look at narrative than a 'story,' " Hval told NPR in a 2015 interview. "The reward is desire, a desire that is not about inequality and dichotomy, but about liberation. It's a fairy tale, perhaps."

"I wanted to wear him like a coat, suck him out," says Jo, of a former partner. In fantasies, Jo has "paws and claws growing out of fists," and necks elongate "thin and long like swans." An unwanted kiss is a "Spanish slug, antennas tickling the roof of [her] mouth," while a wanted kiss is a "rush," where "stalks and fingers and veins spread through the body like a new soft skeleton."

Compared to Hval's "continuous echo of splitting hymens;" her appellation of "soft d*** rock" to her fourth album, her orgiastic "black vegetable soups of hair and teeth," Rot often feels like a parade of impressions mixed from her lyrics writ large. Hval has always seemed to admire the cursed image for the shorthand way it suggests the violence of emotional turmoil. But she is at her best and most successful in the novel, as in her music, when she allows herself to follow the twisty thread of a wild vision and spiral backward into more mystic places. Paradise Rot only does this at key moments, and not often enough to pull the novel out of its sometimes too-distant stupor, but the passages that do pursue this movement feel extraordinary, like translations from an ancient, kinky parable.

Here is Jo, for instance, midway through recounting a good dream:

"I'll tell you the fairy tale of the apple. Eve ate the apple, and then Adam came and did so too. Afterward, this apple was forgotten, and it was assumed that it rolled away in the grass while Adam and Eve were chased out of the garden. But that's not true, because secretly the apple rolled in between Eve's legs, scratched open her flesh, and burrowed into her crotch. It stayed there with the bite marks facing out, and after a while, the fruit-flesh started to shrivel, and mold threads grew from the edges of the peel."

Julia Kristeva, in her essay "Powers of Horror," might term the whole of Paradise Rot a work of pure abjection: "that which does not respect borders, positions, rules ... that which disturbs identity, system, order." In art, and in practice, the abject refers to the monstrous, horrific, literally repulsive stuff — corpses and blood and slurry — that one "thrusts aside in order to live." But abjection — to Carral, by proxy Jo and more broadly, to Jenny Hval — is life itself.

Songs Cycles: Jenny Hval On The Importance Of Uncertainty

Cindy Sherman — a woman who has also spun together an artistic existence by inspecting the bonds among our bodies, our fluids, our flesh, and one another — may be Hval's closest analog in her study of the similarities between revulsion and desire. Sherman's photographic Sex Pictures series, one of her many projects that induce lightheadedness on sight, features sharp images of violated and hybrid mannequins posed like odalisques on damp forest floors.

Like the figures in Sex Pictures, Hval is calmly consumed by the grotesque and the relationship it has with women's bodies. Flesh is never immaculate in Hval's universes, but meant to be probed, biopsied, examined intently with a hand mirror in low light. Hval's curiosity is more than simple pleasure in perversity: It's meant to defile the idea of women's bodies as pristine and plush (recall Eve's primary role in Milton's Paradise Lost: "For softness she, and sweet attractive grace") and reshape it into something more dreadfully real. Maybe more revolutionary than that transfiguration is her disemboweling of desire itself, unraveling it to its fearsome, primal state, and exploring the strangeness of how sexuality can alienate one from oneself; how feelings of mistrust come about when desire is new, queer and unreliable. Or, too, the nasty, menacing, small instabilities of attraction — how brutally infiltrative it can feel when realizing, midway, the sensations of a crush — the freakishness of the way it grips.

The cover of Hval's sixth album, Blood B***, features two faces (one of them Hval's) unpeeling from one another from what looks to be a single sheet of skin. It's a photo of two Eves, shot in low-fidelity, and reminds me of one of Sherman's Sex Pictures — "Untitled (#305)" — in which a pair of almond-toned mannequins exhale in soft ecstasy.

"My breath was her breath," Jo intones, barely at a whisper, at the end of the novel.

Aren't all romances conceptual? Though what Carral and Jo had was as doomed as a dream, Hval's treatment of sexuality as grisly eros perhaps shouldn't be all that shocking. Desire, like viscera, is quotidian, part of us, as reliable and as fitful as sleep. When fantasies become reality, however, there's a calculus to be made. What can we live with? What fictions do we have to reject? What happens when we realize loneliness is the gory thing that unsettles?

Hval already wrote a song about this, two years ago, titled "Secret Touch." "It was both ravishing," she sings, her voice curling toward paradise, "destructive, and most of all, (and most of all), absolutely necessary."