Accessibility links
'House Of Cards' Stands Without Spacey, As Claire Underwood Brings Closure Frank Underwood is dead and his wife Claire is the country's first female president. Actor Robin Wright and showrunners Melissa James Gibson and Frank Pugliese talk about bringing the show to a close. 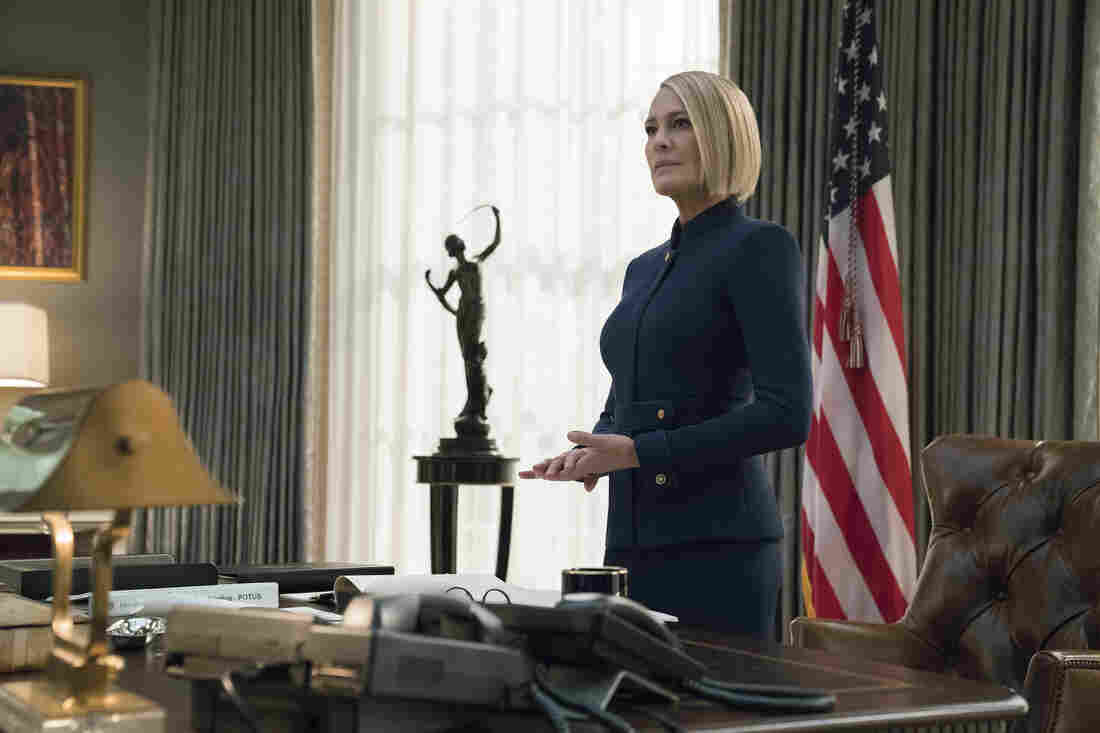 Robin Wright says people like to describe Claire Underwood as "venal" and "cunning" — but she has a hard time seeing her character that way. "I love her because she's so efficient," Wright says. "I mean, she really gets things done, no matter what it takes." Showrunner Melissa James Gibson adds: "She's just as much of an anti-hero as Francis ever was." David Giesbrecht/Netflix hide caption 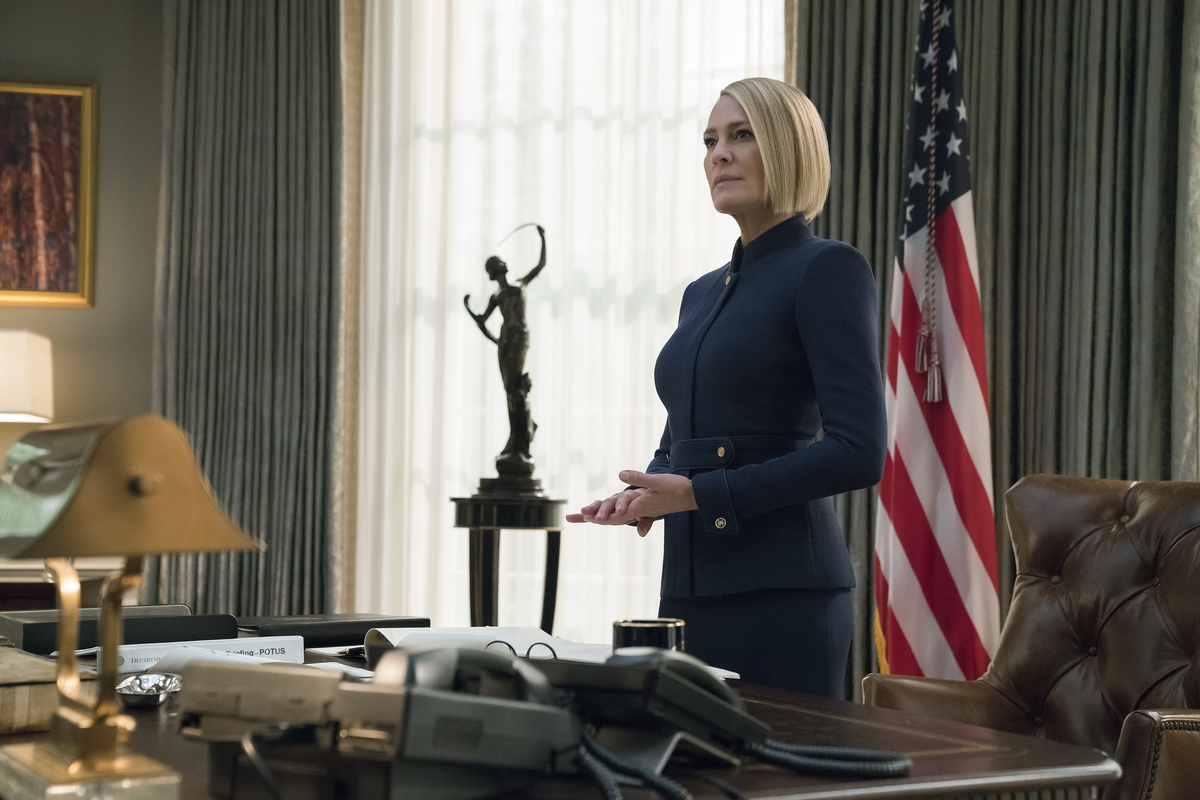 Robin Wright says people like to describe Claire Underwood as "venal" and "cunning" — but she has a hard time seeing her character that way. "I love her because she's so efficient," Wright says. "I mean, she really gets things done, no matter what it takes." Showrunner Melissa James Gibson adds: "She's just as much of an anti-hero as Francis ever was."

In the final season of House of Cards, Francis Underwood is dead. The spotlight now turns to Claire Underwood, the first female president of the United States.

The death of her husband was an unexpected rewrite — the writers and producers had to suddenly re-envision their Emmy Award-winning show after star Kevin Spacey was accused of sexual harassment and assault. But the cast and crew were determined to continue House of Cards without him.

Canceling the show, says now solo-lead star Robin Wright, "would have been putting almost 2,000 people out of a job. ... You've got mortgages to pay, you've got college tuition to pay. That's what I was thrilled about: just to keep people employed and to close out this beautifully operatic show the way it should be closed out."

Executive producer and writer Melissa James Gibson also wanted to see the show end properly. "Our main concern was to finish the story with integrity," she says.

Gibson, Wright, and co-showrunner Frank Pugliese sat down to talk about how they brought House of Cards to a close.

Wright: We all found out through the press and, you know, of course [there was] shock and surprise and then you're pulverized, as a team. What do we do? What's the moral and ethical thing to do? ...

Gibson: Before the first read-through of the new version of the season we took some time to, you know, acknowledge what we were all going through. ... These are very deep and close relationships that have been forged over a number of years. And I would say we were all there to support each other and see each other through to the end.

Forget Right And Wrong: 'House Of Cards' Is About Pragmatism And Power

On the work it took to rewrite and reshoot Season 6

Gibson: It took significant work, but at the same time, you know, all of the DNA was there. As you may know, Season 5 ended with Robin's character, Claire, turning to the camera and saying: "My turn." ... Frankly it became an opportunity this season to see who she is without him, and to get to know her on her own terms. ...

It also really has turned into a season of reckoning — you know, Claire reckoning with herself, her choices, her ambition, with her country even. And indeed with everything she did with, and without, Francis in the seasons prior.

On House of Cards without Frank Underwood

Gibson: We knew to deny the existence of Francis Underwood would be dishonest, you know, to the history of the show. There's no way that Claire isn't in dialogue with her past with him as she's forging a future for herself.

Pugliese: I think the most terrifying aspect of the question is not so much how House of Cards may have been like politics, but the fact that politics has become like a television show. ... It's our nature as dramatists to sort of create conflict and keep things unresolved. The fact that that's now a lot of what politics tries to do to keep itself relevant — in the most unhealthy way — is scary. ...

Gibson: When you think about it, the inciting incident of the show really was a man being passed over. At the opening of the whole series you saw Francis Underwood kill an injured dog, turn to us [the viewers], and then hold forth about the varieties of pain. ... I think you could sort of argue that the whole show, in a way, is a meditation on the nature of pain — within the democracy but also within a marriage.

Wright: I felt like I was treading on territory that wasn't mine when I first did it. I felt naughty. And then how quickly it becomes second nature. ...

Gibson: Last season [Claire] turned to us [the viewer] and said: "I've always known you were there." She just didn't need us in the same way. ... It's a different seduction with Claire as opposed to Francis.

Pugliese: Francis seemed to always be campaigning and Claire is actually negotiating trust with the audience she's speaking to.

On how Wright feels about being quoted in the media, when asked about Kevin Spacey, that she feels sympathy for those who live "in the public arena" and that she believes in "second chances"

Wright: I hate what the media does with our sentiments and our words. I didn't say just that sentence — this is the problem — of being extracted, you know — that's one sentence out of a paragraph that I said. I said: I believe when people do the work and they reform. I think everybody has the ability to do that: Do the work and reform. That's what I said. And in that instance, then you should be given a second chance in life — if there's true change that occurs. So I wasn't pinpointing any specific human being. I was talking about humankind and their abilities. So when I was paraphrased— I've just decided to not comment anymore because I'm so sick of being taken out of context, and then that's being insensitive to victims out there that I'm not insensitive to.

On the relationships formed on the House of Cards set

Wright: Normally you're making a movie for six, eight, 10 weeks and then you say goodbye to those people, goodbye to that collaboration, and you maybe never see them again. This was a six-year relationship that we had. We spent more time with each other than we did our own families. ... People would visit the set and they'd walk off and they were like: Wow, it's palpable how close everyone is. You can feel how everyone has each other's back. ... That was in the air — and we had so much fun making it.

Danny Hajek, Kelli Wessinger and Jerome Socolovsky produced and edited this interview for broadcast. Beth Novey adapted it for the Web.