Accessibility links
'This Is Not Liberation': Life In The Rubble Of Raqqa, Syria The city's slow recovery after ISIS rule is causing anger among residents who say they're left with little help from the countries that destroyed Raqqa. 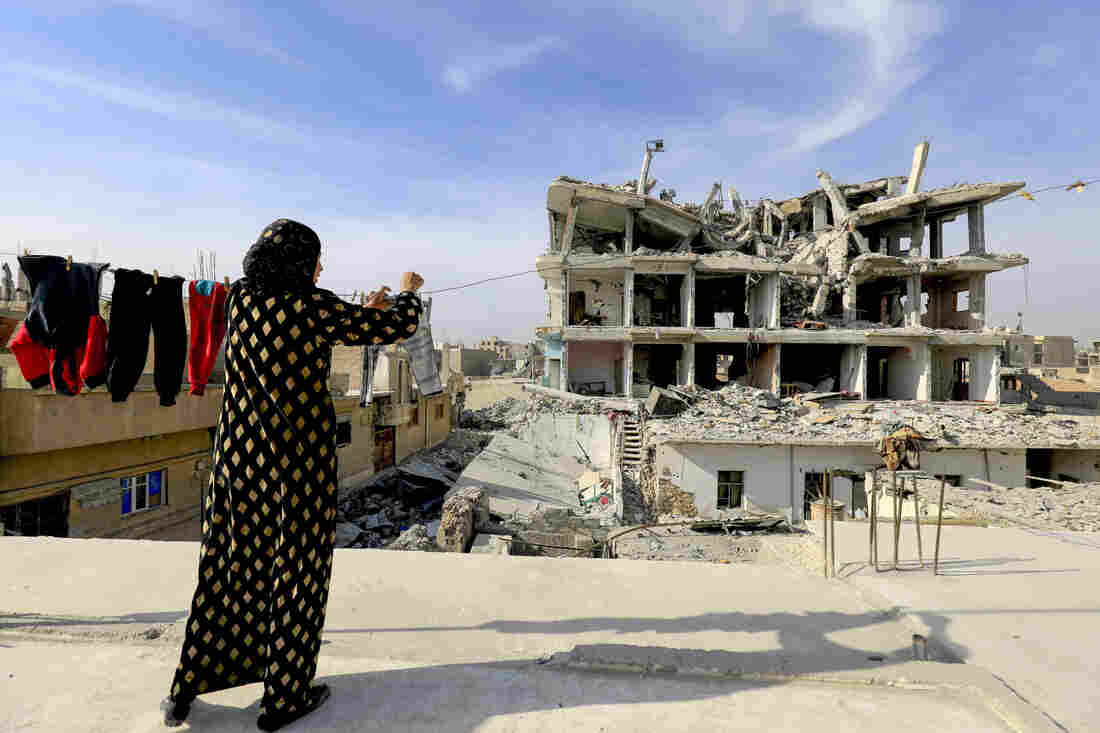 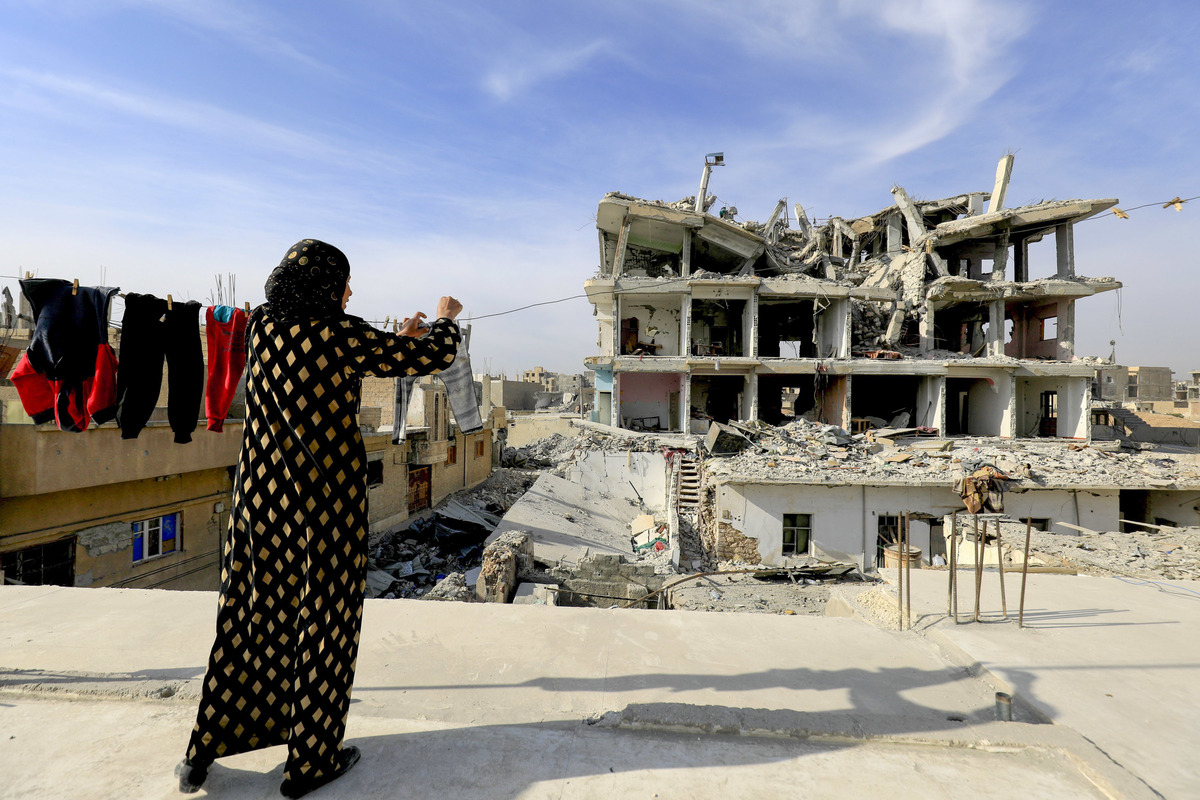 A Syrian woman hangs laundry in Raqqa, the former "capital" of the Islamic State group in Syria, on Jan. 11.

The Syrian city of Raqqa is blanketed in despair. Residents survive in a wasteland of war-warped buildings and shattered concrete. They sleep exposed to the elements in homes with blown-out walls.

Amid the destruction, abject poverty has taken hold. Once a place of green parks and a thriving middle class, it's now common to see women and children scavenging Raqqa's debris-strewn streets for scrap metal to sell. A recent United Nations report finds that more than half of those who have returned don't have enough to eat.

"This is not liberation," says Abu Ward, who asks not to use his full name as he feels the city is too unsafe to speak openly. "Liberation" was the word that the Trump administration and its allied fighters used after they defeated ISIS in Raqqa in October 2017.

"It's destruction. Systematic destruction. This is what people believe — my relatives, my friends, my neighbors. No one can change their minds. How can you expect them to feel free when their lives are destroyed?" 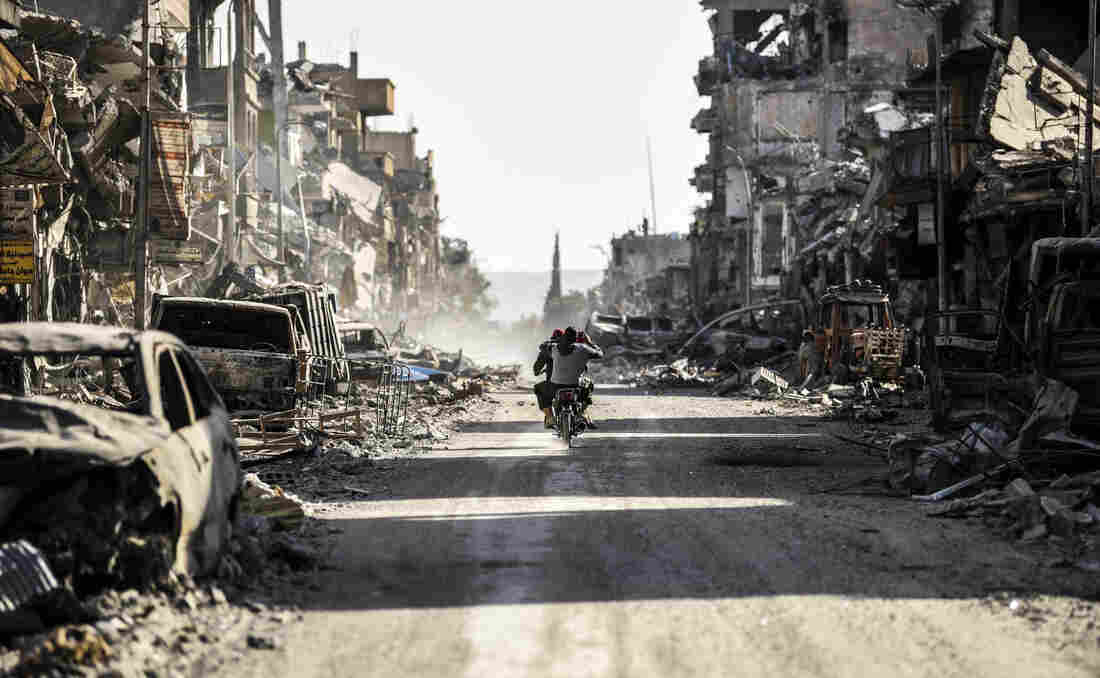 A Syrian youth uses his cellphone to film the destroyed vehicles and heavily damaged buildings down a street in Raqqa on Oct. 20, 2017, after a Kurdish-led force expelled ISIS fighters from the northern Syrian city, formerly the group's "capital." Bulent Kilic/AFP/Getty Images hide caption

One year after the United States-led coalition of countries and militia fighters drove ISIS from its onetime capital Raqqa, the city remains in ruin. And its people feel they're left to piece together their lives with little help from the countries that destroyed their city and homes.

Amid their resentment, insecurity is growing. In the recent two weeks that NPR visited Raqqa, an unnamed militia attacked the local police's security headquarters, prompting a gunfight, and there were reports of at least two roadside bomb attacks targeting coalition vehicles and the local security forces. 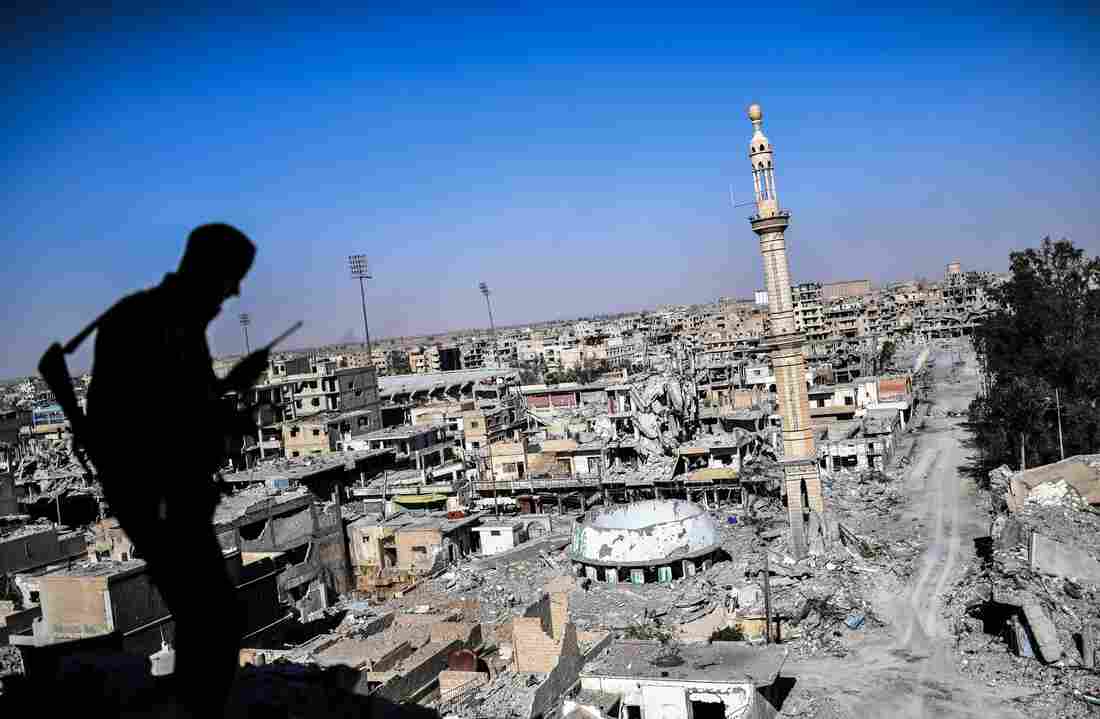 A member of the Syrian Democratic Forces, backed by U.S. special forces, talks on the radio near Raqqa's stadium as they clear the last positions on the front line on Oct. 16, 2017. The city was an important Islamic State group stronghold. Bulent Kilic/AFP/Getty Images hide caption 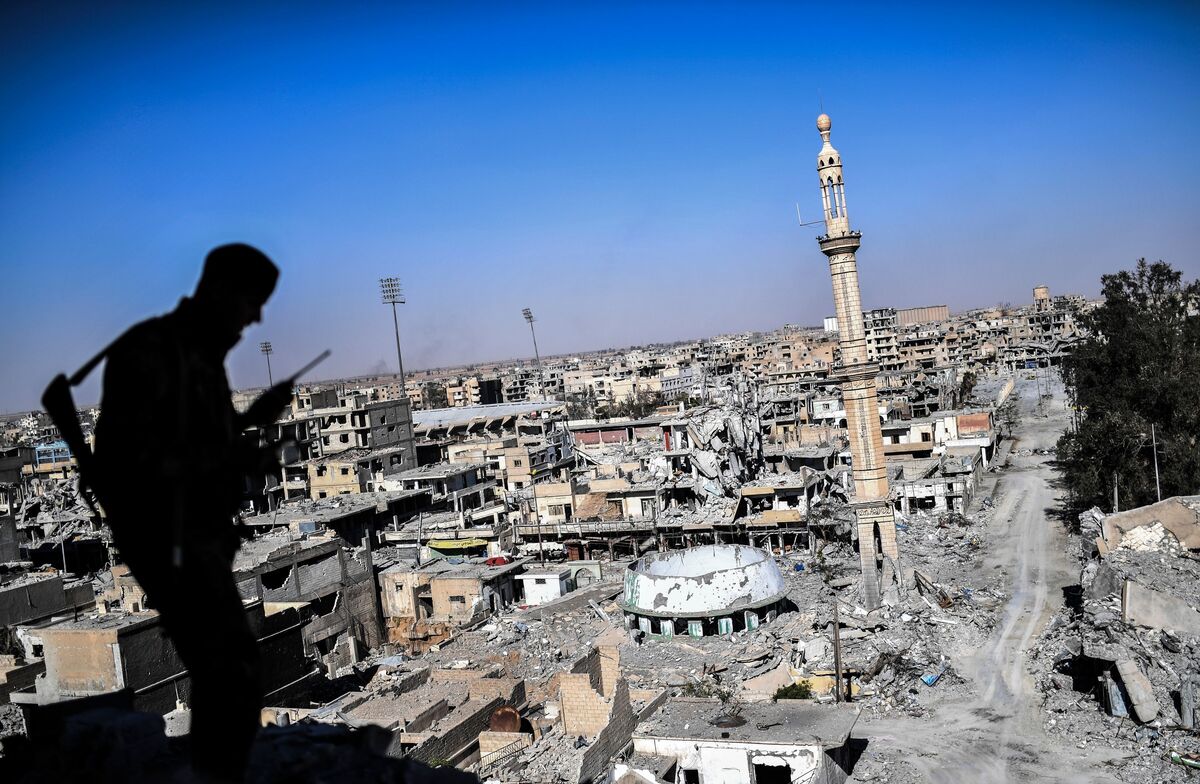 A member of the Syrian Democratic Forces, backed by U.S. special forces, talks on the radio near Raqqa's stadium as they clear the last positions on the front line on Oct. 16, 2017. The city was an important Islamic State group stronghold.

Local officials attribute these operations to "ISIS sleeper cells," and the militant group has claimed some of the attacks. Aid workers and other independent observers in the area, however, say the assaults may be the latest signs of the local majority-Arab population's growing anger at the city's new, Kurdish-led and American-backed administration.

The military victory may be complete but that doesn't mean you then just leave.

ISIS seized Raqqa in early 2014 and controlled the city for almost four years. After taking the city from them last year, the U.S. said it was committed to "stabilizing" Raqqa as part of its offensive against ISIS. The Syria Transition Assistance Response Team, or START, has been tasked with helping reopen schools, hospitals and other public infrastructure.

"We have a clear mandate to counter ISIS. The military victory may be complete but that doesn't mean you then just leave," says a U.S. State Department official working in Syria, who asks not to be named because they are not authorized to talk to the media. "You need to stabilize the area so they don't return."

But funding for this U.S.-led stabilization effort is limited and won't likely achieve the government's objectives.

Even officials in the U.S.-backed Raqqa Civil Council say the help is negligible compared to the need. "Of course we can't say the funding is enough because the city is big and needs more," says Ibrahim Hassan, who heads the Raqqa Civil Council's reconstruction committee.

So far, START has provided $250 million toward Raqqa's recovery, largely channeled through U.S. contractors to local nonprofit organizations. But in late March, the White House froze more than $200 million from the budget. Much of that has been replaced with donations from other countries.

According to the State Department official and Raqqa Civil Council members, this money has helped clear street rubble that blocked roads in much of the city. It has funded the removal of some mines and booby traps. It also pays some salaries for teachers and other public service workers.

But in a city, where as many as 80 percent of the buildings have been destroyed, it's a tiny portion of the work still needed to make the city habitable. While no official studies have been published on the topic, locals involved in the stabilization effort say privately that they believe Raqqa needs billions of dollars. 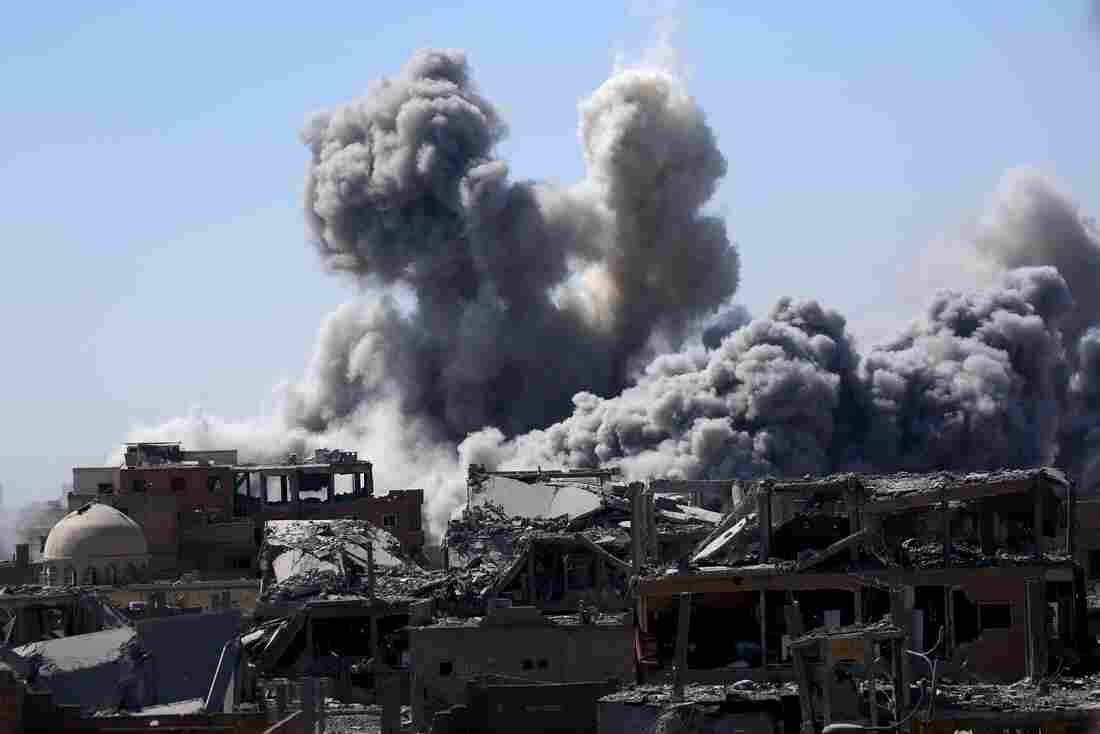 While campaigning for the 2016 election, Donald Trump promised to "bomb the s***" out of ISIS. The Trump administration then relaxed the rules of engagement to allow the military to bomb targets more quickly and fiercely.

In May 2017, Secretary of Defense James Mattis boasted on CBS' Face the Nation that the coalition had changed from a tactic of "attrition" against ISIS to one of "annihilation."

The annihilation of ISIS' former Syrian capital is testimony to that. Whole neighborhoods were all but flattened. In others, where tower blocks still stand, it's hard to spot a building that didn't suffer some damage.

A combination of Kurdish and Syrian Arab ground troops, armed and trained by the U.S., and American, British and French air power carried out the offensive. Some U.S. special forces also assisted the fight, manning artillery batteries — bigger weaponry than was given to the local forces.

The coalition maintains that it fought one of the most "precise" wars in modern history, causing minimal civilian casualties. But in a report in June, Amnesty International said the coalition actually killed "hundreds of civilians" in its four-month operation to capture Raqqa. It said the coalition may have committed war crimes through its "indiscriminate" use of heavy weaponry.

NPR Correspondents On Their Recent Visit To Raqqa

Raqqa: View From The Ground

ISIS used civilians as "human shields," often preventing residents from fleeing the city. But the anti-ISIS coalition knew that tactic before the Raqqa campaign, and Amnesty says coalition forces "did not take adequate account of civilians present in the city and failed to take the precautions necessary to minimize harm to civilians and civilian objects."

At the headquarters of Raqqa's response team charged with finding dead bodies, desperate relatives are filing cases of missing loved ones and residents are reporting the stench of rotting corpses near their homes.

Many in the city are still reeling in shock. In one bombed out school that still hosts classes for more than 500 children, the administrator almost breaks down as he describes seeing the city for the first time after the drawn-out battle. Like other residents interviewed, he doesn't want to use his name in this story for fear of his safety.

"It was an indescribable feeling. I'd been gone from Raqqa for one year and fourth months. I was psychologically destroyed and I really missed my city; I wanted to kiss the dirt of Raqqa," he says.

Every day that passes the children play near these weapons.

"But then I came back and I saw the destruction, I started to cry. Tears were falling from my eyes."

Looking around a classroom, he says, "This school used to have books and libraries and even a garden." 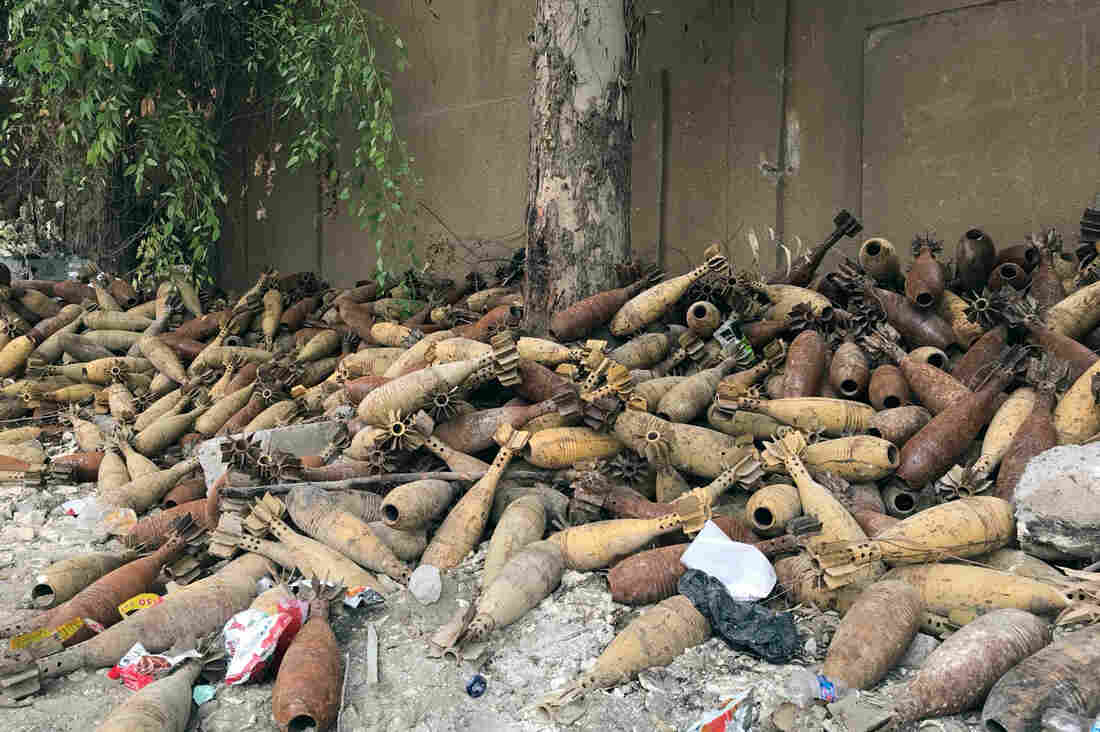 Mortar shells are piled up in the back of a school playground in Raqqa, Syria. Ruth Sherlock/NPR hide caption 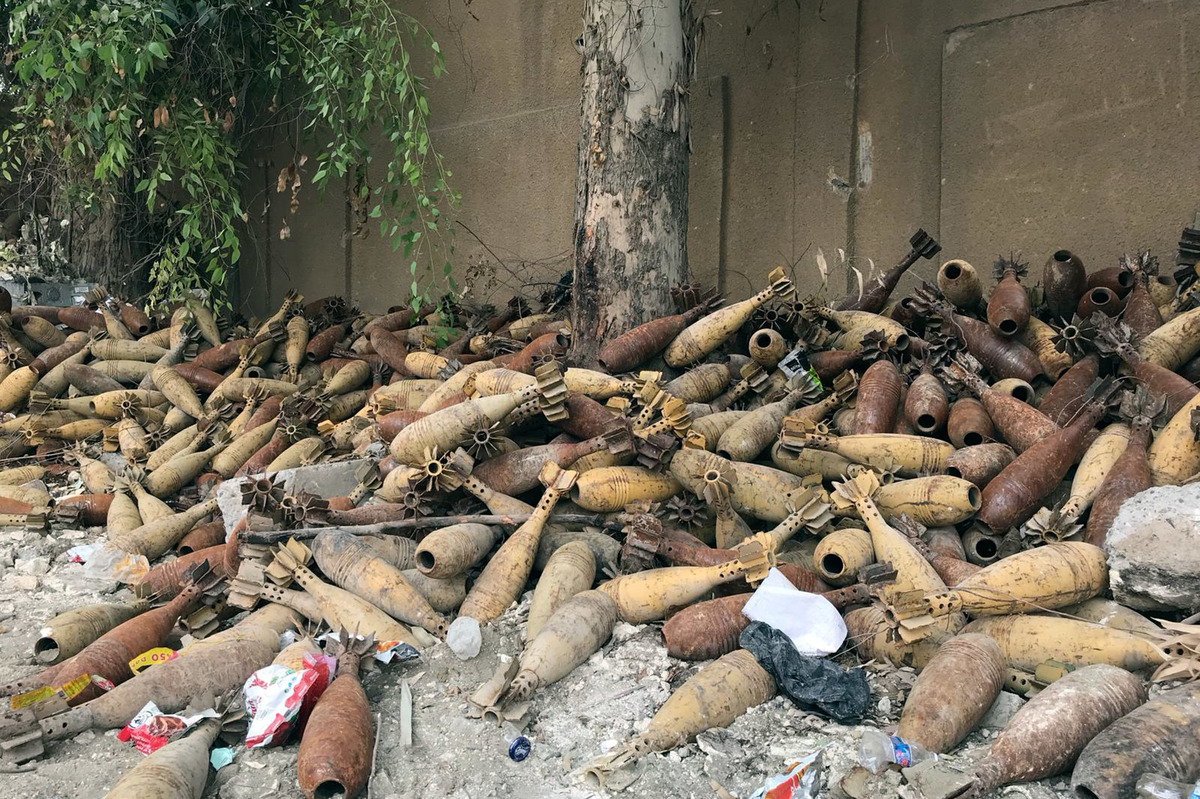 Mortar shells are piled up in the back of a school playground in Raqqa, Syria.

The roof collapsed in an airstrike. Classroom windows shattered, leaving jagged shards stuck to the frames. Hundreds of mortar shells lie piled against the back wall of the playground.

"We think most of these mortars are spent, but we're not sure," he says. "We were told some experts would come and take them away. But that was weeks ago, and every day that passes the children play near these weapons."

The school administrator is one of more than 150,000 people the United Nations estimates have come back to Raqqa since October 2017. The U.N. says the city's population was previously more than 220,000.

He says that the signs of improvement in the city — of homes being rebuilt and stores opening — are the result of local resilience, and not outsiders' assistance.

He explains residents' deep anger at the coalition: "The person whose house is destroyed will be angry, and people who lost sons. Two of my cousins died in the airstrikes — and my uncle. Of course, I will be angry at the countries who have interests and players in this country."

"Life was better then"

Many locals even say, that despite ISIS' harsh dictates, it was easier to live in Raqqa then than now.

"ISIS is terrorism, there's no doubt about that," says one 38-year-old father, standing on the porch of his half-destroyed home. His young boy plays on a swing in what was once a well-tended garden.

"Despite this, life was better then. It's very expensive now. Bread under ISIS was cheaper. Now some families can't even afford that."

He was a firefighter before the war. His wife has a university degree in English but also hasn't been able to find work.

"If things don't get fixed here then there will be no security," he says. "If the U.S. and the local government here don't fix things, then in the end the people will rebel. The pressures will cause people to explode."

As the NPR crew drives out of Raqqa, through its decimated northern suburbs, it finds graffiti that still looks wet. In Arabic, the writing reads: "Whether you like it or not, ISIS is here."