Accessibility links
5 Ways To Make Classrooms More Inclusive LGBTQ students are more likely to be bullied, which can lead to missed classes and a higher risk of suicide. For them, a teacher who knows how to "queer" the classroom can make a big difference. 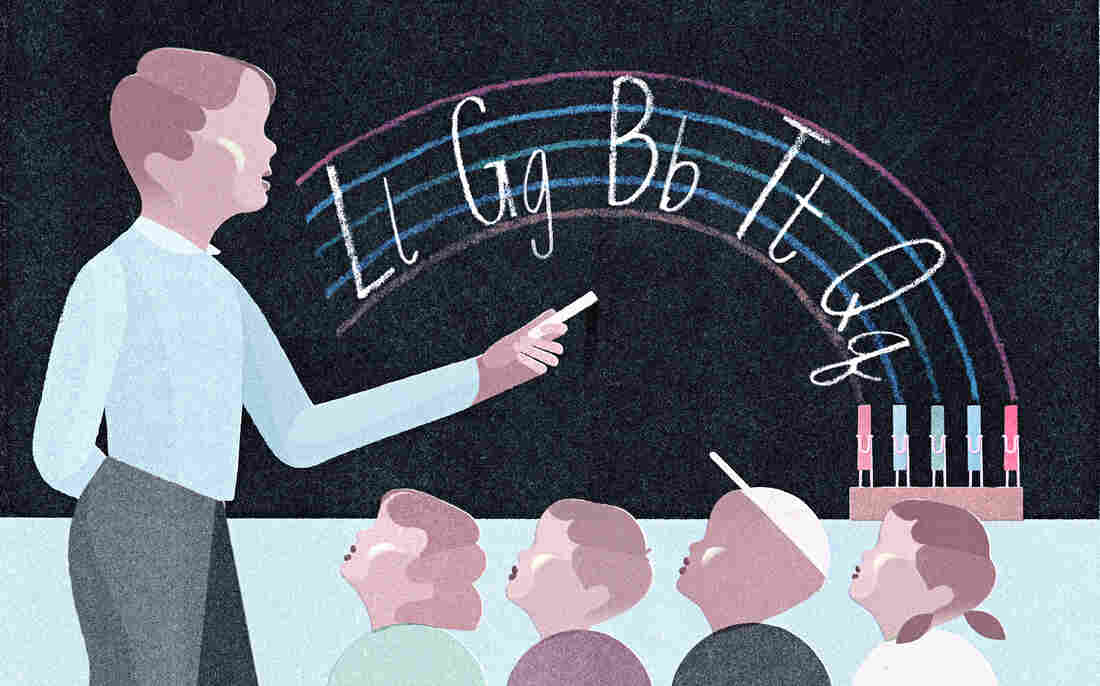 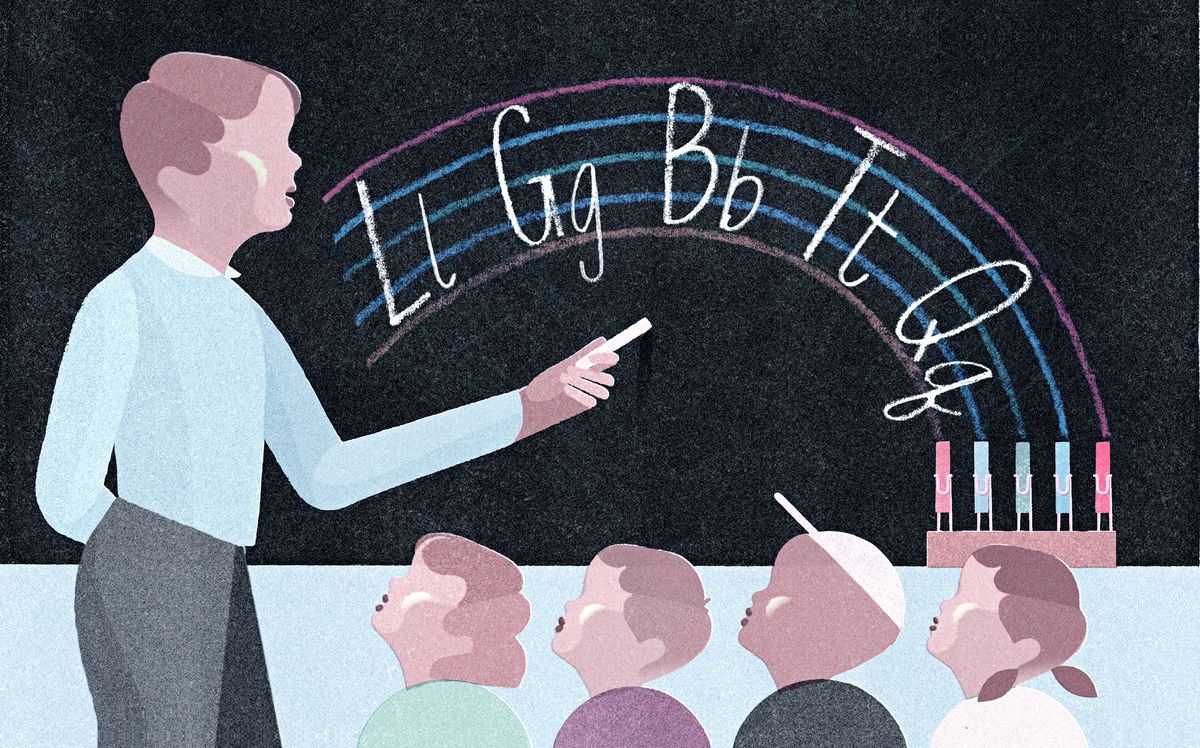 Back in September, teacher Mary Gilreath's first-grade class was asked to wear blue for Peace Day. An adult worried the girls might not own blue shirts, and Gilreath saw an opportunity for her Boulder classroom. She shared the story with her students.

"What do you all think about that?" Gilreath asks them.

"Maybe it's because girls mostly wear dresses?" a girl wonders.

"Oh, is that true?" Gilreath replies. "What do you all think?"

The first graders erupt in a chorus of "No!"

Gilreath goes out of her way to address gender identity in her classroom. She says it's "a safety issue and a mental health issue for kids," pointing to the recent suicide of a 9-year-old Denver boy who was bullied after he came out to his classmates.

Studies have shown LGBTQ students are more likely to be bullied at school, which can lead to missed classes and a higher risk of suicide. For those kids, a teacher who knows how to be inclusive — or how to "queer" the classroom, as some refer to it — can make a big difference. But many teachers aren't sure how to do that. Over the years, gender and sexual identity have evolved, and not everyone has kept up.

"When they [teachers] realize, 'I don't know what I'm doing,' you know how vulnerable it feels? It's a big deal. They need support."

"When they [teachers] realize, 'I don't know what I'm doing,' you know how vulnerable it feels? It's a big deal. They need support," says Bethy Leonardi, co-founder of A Queer Endeavor, an initiative of University of Colorado Boulder School of Education. A Queer Endeavor helps teachers navigate questions like how to intervene when they see anti-LGBTQ bullying, how to be there for students who identify as gender-fluid and how to address kids who use gender-neutral pronouns like "they."

The organization has put out a list of tips for making classrooms more LGBTQ-friendly. They include:

"I just didn't know the questions to ask"

Lisa Durant teaches health and physical education at a high school outside Denver. She says when she started hearing students use words like "asexual" and "gender-fluid," "I had no idea what they were talking about."

In Delaware, Students (And Parents) Can Soon Choose Their Race And Gender At School

Know An LGBTQ Student Itching To Study Abroad? Here Are Some Things To Think About

Then in June, Durant attended A Queer Endeavor's teacher training. She learned some new terminology ("C-I-S; binary, non-binary; the umbrella of transgender, pangender") and reconsidered an interaction with a student who transitioned from male to female while at Durant's school. She remembers talking to that student about which pronouns to use and the lesson material she'd missed. But Durant now looks back at that conversation with regret.

She says she didn't ask, " 'How can I support you? What do I need to do to make you feel more comfortable in a group setting in this classroom?' I just didn't know the questions to ask."

A Queer Endeavor also encourages teachers to validate who their students are. Before the training, Denver high school teacher Kari Allerton had always lived the mantra that it doesn't matter who you love or how you identify: "You're all my students and I love you all." But the training gave her an insight.

"Saying [to a teenager] that I don't care if you're gay or straight or trans, it's almost like when people say, 'I don't see color.' "

"Saying [to a teenager] that I don't care if you're gay or straight or trans, it's almost like when people say, 'I don't see color,' " she explains. It's dismissing them instead of "validating the beautiful people that they blossom into at our school."

She remembers a student who, by the end of the year, had dyed his hair pink and started wearing earrings and lipstick. "I didn't say anything to him," Allerton says — she didn't know what to say. At the training, a fellow teacher made a suggestion: "It's so much fun watching you become who you are."

As an LGBTQ teacher, Meghan Mosher brings a different perspective to her Louisville classroom. She says she works hard to make her high school science class a place where kids feel free to ask uncomfortable questions. Once, during a lesson about chromosomes, she heard a student put one such question to his classmate.

"He was whispering across the table and said, 'Is that what makes you gay?' "

For Mosher, it was a chance to clarify that many factors determine sexual orientation and gender identity.

But Mosher has also struggled with how to address slurs like "That's so gay." In the past, she talked to kids individually; but that didn't stop other students from uttering the same slurs. Then one day she heard it in the middle of a lab.

"And I stopped everybody. And it was dead silent. And I said, 'It's not OK to use someone's identity as an insult.' And I finally brought my own identity into it."

The slurs stopped after that. She knows not all teachers can bring their personal lives into the classroom, but she says it's important to tell kids what's appropriate and what's not.

Asher Cutler agrees. A recent Denver high school graduate, Cutler identifies as gender-fluid. At the training, they said they know it can be uncomfortable to intervene, but, "Don't fear that. Go for it, please. Your role as an authoritative figure means that you can save someone's life. ... These comments are the little things that build up over time, and you have to, as a teacher say, 'No, we don't talk like that in my classroom.' "

When a teacher makes their classroom a safe place where a student isn't bullied for an hour out of the day, "That is so important," Cutler said.