Accessibility links
Feds Charge Cesar Sayoc With Mailing Improvised Bombs To Political Critics Cesar Altieri Sayoc was arrested after more devices were found on Friday. Packages have been sent to at least 11 targets this week, all of whom are critics or opponents of President Trump. 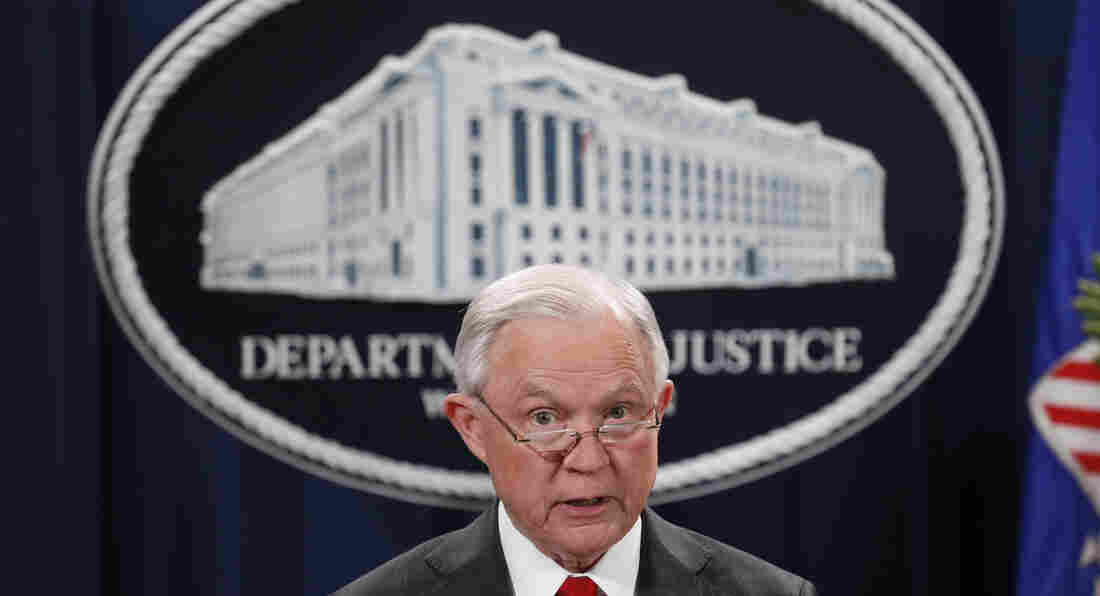 Attorney General Jeff Sessions speaks Friday at a news conference about the apprehension of a suspect in the recent spate of suspicious packages. Aaron P. Bernstein/Getty Images hide caption 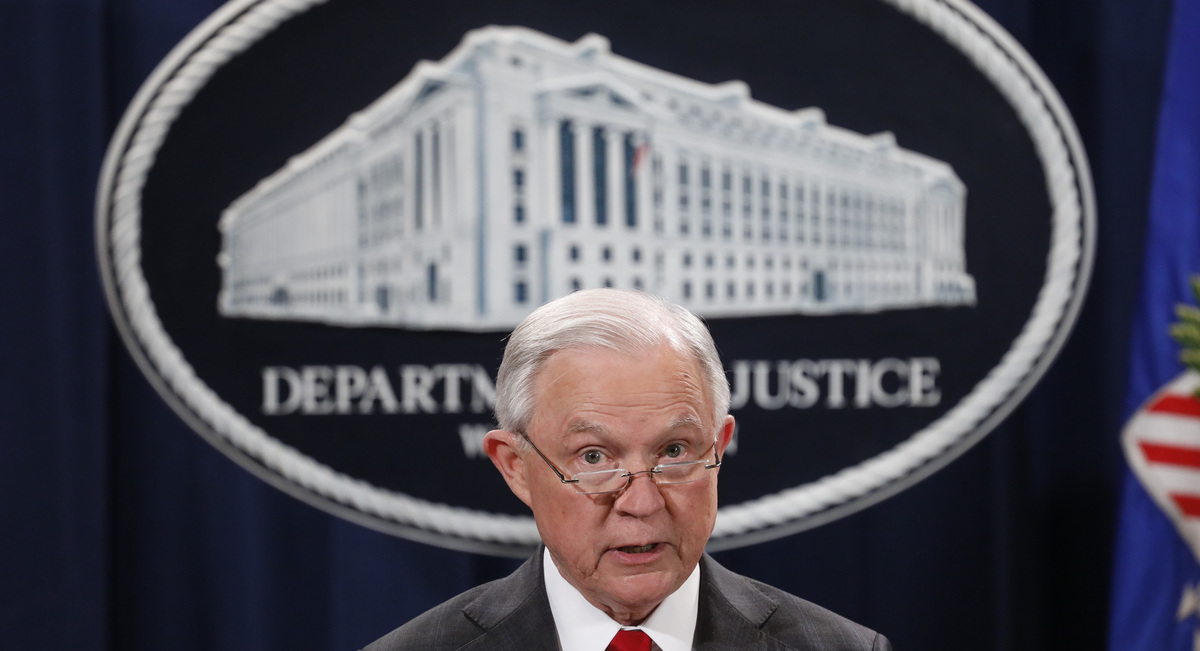 Attorney General Jeff Sessions speaks Friday at a news conference about the apprehension of a suspect in the recent spate of suspicious packages.

The Justice Department charged a Florida man on Friday in connection with a wave of improvised explosive devices sent to political critics of President Trump.

Cesar Altieri Sayoc, 56, is facing five federal charges after he was arrested in Plantation, Fla., following a national investigation. He faces a potential total of 48 years in prison.

Earlier Friday, the Justice Department had erroneously said Sayoc could face up to 58 years in prison.

The homemade bombs intercepted or discovered this week "are not hoax devices," said FBI Director Christopher Wray during a news conference with law enforcement officials Friday.

They contained "energetic materials" packed into PVC pipes and could have been dangerous, he said, although none of them exploded and no one was hurt.

Asked at the same news conference why it appeared that Sayoc allegedly only targeted liberal political figures, Attorney General Jeff Sessions said "he may have been a partisan ... appears to be partisan, but that will be determined as the case goes forward."

Neither Sessions nor Wray would directly address questions from journalists about political motives and the packages discovered across the country this week.

FBI and other investigators surrounded a white van believed to be connected to the case in a parking lot in Plantation; their inspection was shown live on cable TV and the van was loaded onto a flatbed truck.

Court documents later established that the van, which was covered with pro-Trump and anti-CNN images, belonged to Sayoc; a former attorney who had represented him told NPR Sayoc has been living in a van for some time.

Trump hailed law enforcement agencies in a statement at the White House and condemned the prospective threats to political leaders.

"These terrorizing acts are despicable and have no place in our country," he said. "We must never allow political violence to take root in America. We cannot let it happen."

The #FBI has confirmed a package has been recovered in California, similar in appearance to the others, addressed to Tom Steyer.

Later, Trump was asked about the apparent support for him expressed by the suspect on social media and on his van, which bears an illustration that appears to depict Trump standing on a tank holding a rifle before an American flag with fireworks exploding in the background.

"Did you see your face on that van, sir?" Trump was asked.

"I did not," the president said. "I did not see my face on the van. I don't know. I heard he was a person that preferred me over others, but I did not see that."

Trump did reject the idea that he or his statements might be in some way culpable in the attacks. The president alluded to the shooting last year at a mostly Republican baseball practice outside Washington, D.C., in which Rep. Steve Scalise, R-La., was badly wounded.

"There's no blame. There's no anything," Trump said. "If you look at what happened to Steve Scalise, that was from a supporter of a different party."

The announcement of the charges followed the discovery Friday of more packages bound for political foes of Trump.

Harris was mentioned in the criminal complaint as a target known to federal investigators. Though Steyer was not in the complaint, in a tweet Friday night the FBI confirmed a package addressed to Steyer had been recovered, suggesting a 14th package linked to the allegations against Sayoc. It wasn't clear whether the parcel he addressed in his statement might be connected to this case.

Earlier, a package was discovered in Florida addressed to Sen. Cory Booker, D-N.J., and one in New York City to former intelligence boss James Clapper. 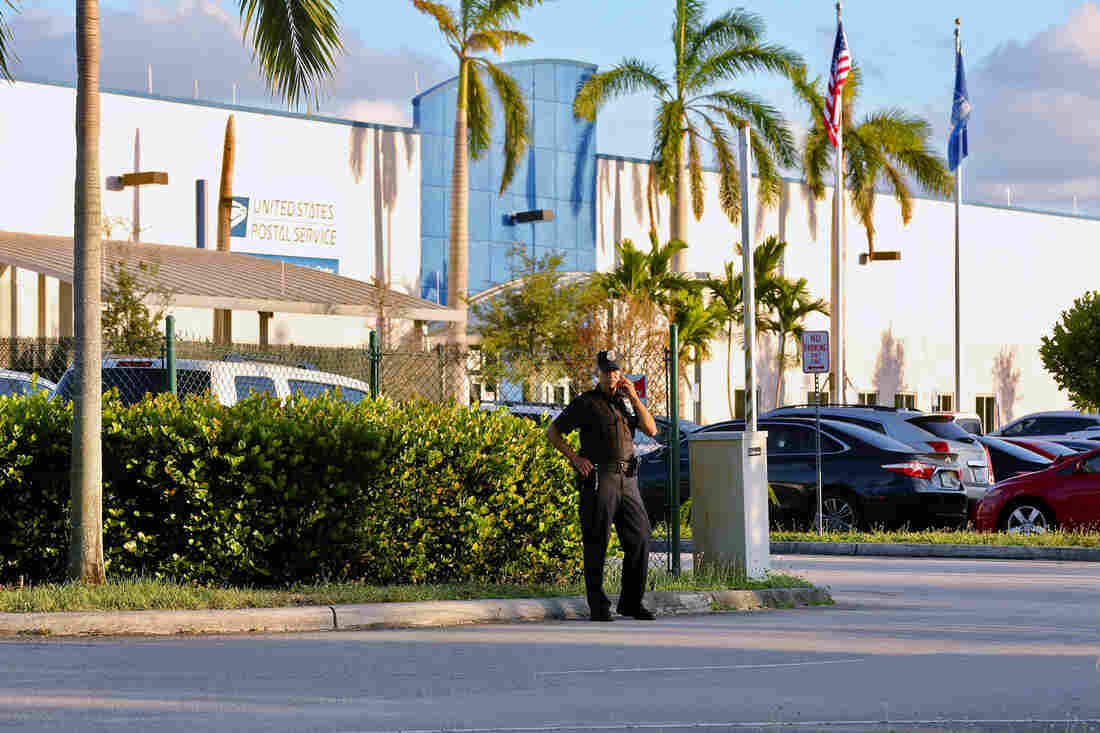 Police outside the U.S. Post Office Royal Palm Processing & Distribution Center, in Opa-locka, Fla., on Thursday. At least one of the recovered packages passed through the center. Miami Herald/TNS via Getty Images hide caption 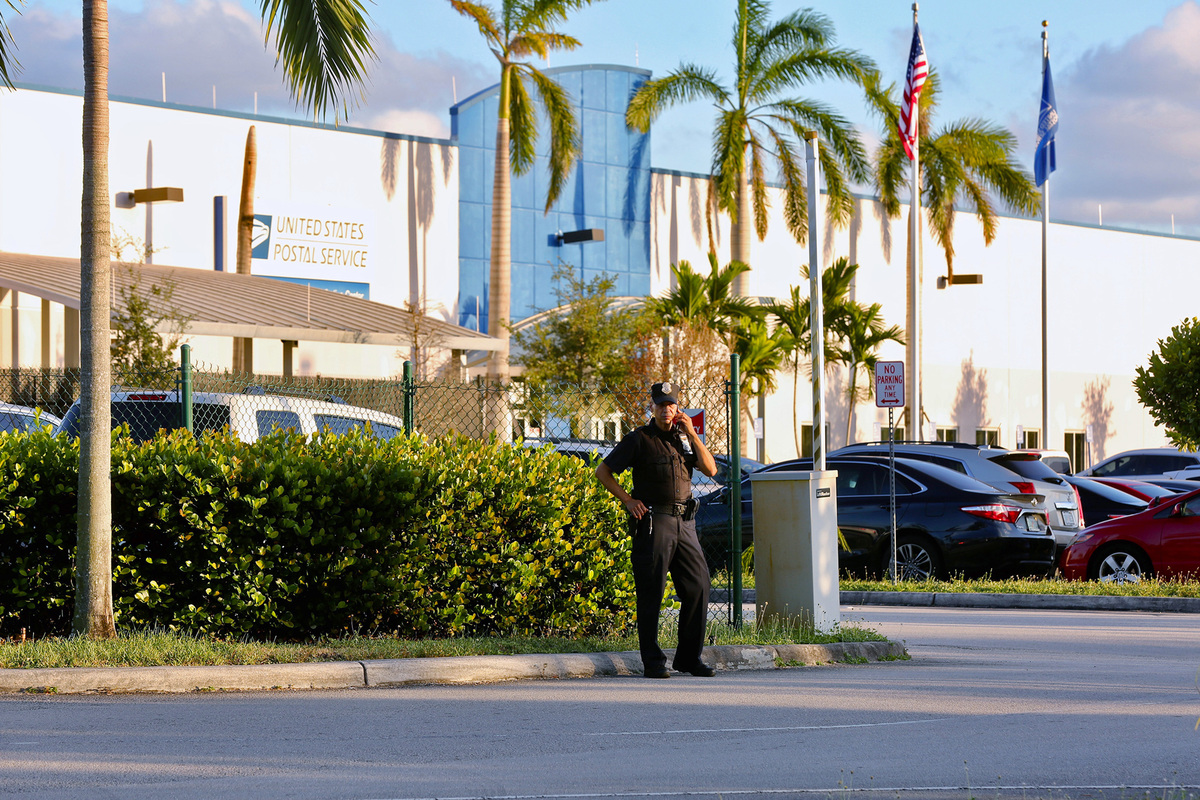 Police outside the U.S. Post Office Royal Palm Processing & Distribution Center, in Opa-locka, Fla., on Thursday. At least one of the recovered packages passed through the center.

The recovery of those envelopes brought the known total to 14 parcels addressed to 12 targets, all of whom are critics or opponents of the president.

Federal authorities have acknowledged that they don't know how many total packages there are and that there could be more moving through the mail as the search for them continues.

Clapper, who is a commentator on CNN, called in to the cable network to say on the air, "This is definitely domestic terrorism. No question about it in my mind."

Although the homemade pipe bombs have not exploded, authorities say they are treating them as "live devices," not "hoax devices," New York City Police Commissioner James O'Neill said Thursday.

Authorities who have discovered the parcels around the country — in New York, outside Washington, D.C., in Florida and in Los Angeles — are sending them to the FBI Laboratory in Quantico, Va., for examination there.

At least one of the packages passed through a large U.S. mail sorting facility in Opa-locka, Fla., near Miami, according to multiple reports.

The Miami Herald, citing a federal law enforcement official familiar with the investigation, reports that the package sent from the facility is likely the one that ended up on Wednesday at the South Florida office of Rep. Debbie Wasserman Schultz.

That package was originally sent to the office of former Attorney General Eric Holder. It was not delivered and was instead sent to the labeled return address — listed as Wasserman Schultz's office.

Before the package arrived there, it was rerouted through the Opa-locka mail sorting facility, the Herald reports.

"A search of a postal database suggested at least some may have been mailed from Florida," the AP reported.

Hundreds of thousands of packages pour into the facility every day — it's the size of five football fields, the Herald reports. Miami-Dade Police Department specialists worked at the mail center on Friday morning, the agency said.

The packages began to show up on Monday, starting with billionaire George Soros, a major donor to Democrats and Democratic causes.

De Niro included a political call-out in his statement about the packages on Friday morning.

"I thank God no one's been hurt, and I thank the brave and resourceful security and law enforcement people for protecting us," he said. "There's something more powerful than bombs, and that's your vote. People must vote!"

Trump sounded the same note when he addressed the parcel attacks Friday morning on Twitter.

Republicans are doing so well in early voting, and at the polls, and now this “Bomb” stuff happens and the momentum greatly slows - news not talking politics. Very unfortunate, what is going on. Republicans, go out and vote!

Trump's use of sarcasm quotes around "bomb" appeared to be an allusion to skepticism voiced by some former investigators and explosives specialists about the devices. As one expert told NPR, the apparently homemade devices look as though they might include hazardous materials but not as though they could explode.

The president changed his tone later in the day after Sayoc's arrest was announced.

A wide investigation continues, with the FBI, the Postal Service and other federal agencies working with state and local authorities.