Accessibility links
The Lazarus Drug | Hidden Brain More than 70,000 people died of drug overdoses last year — many of them from heroin and other opioids. One of the most widely-used tools to confront this crisis is a drug called naloxone. It can reverse an opioid overdose within seconds, and has been hailed by first responders and public health researchers. But earlier this year, two economists released a study that suggested naloxone might be leading some users to engage in riskier behavior — and causing more deaths than it saves. This week, we talk with researchers, drug users, and families about the mental calculus of opioid use, and why there's still so much we're struggling to understand about addiction. For more information about the research in this episode, visit https://n.pr/2OZfuGQ. 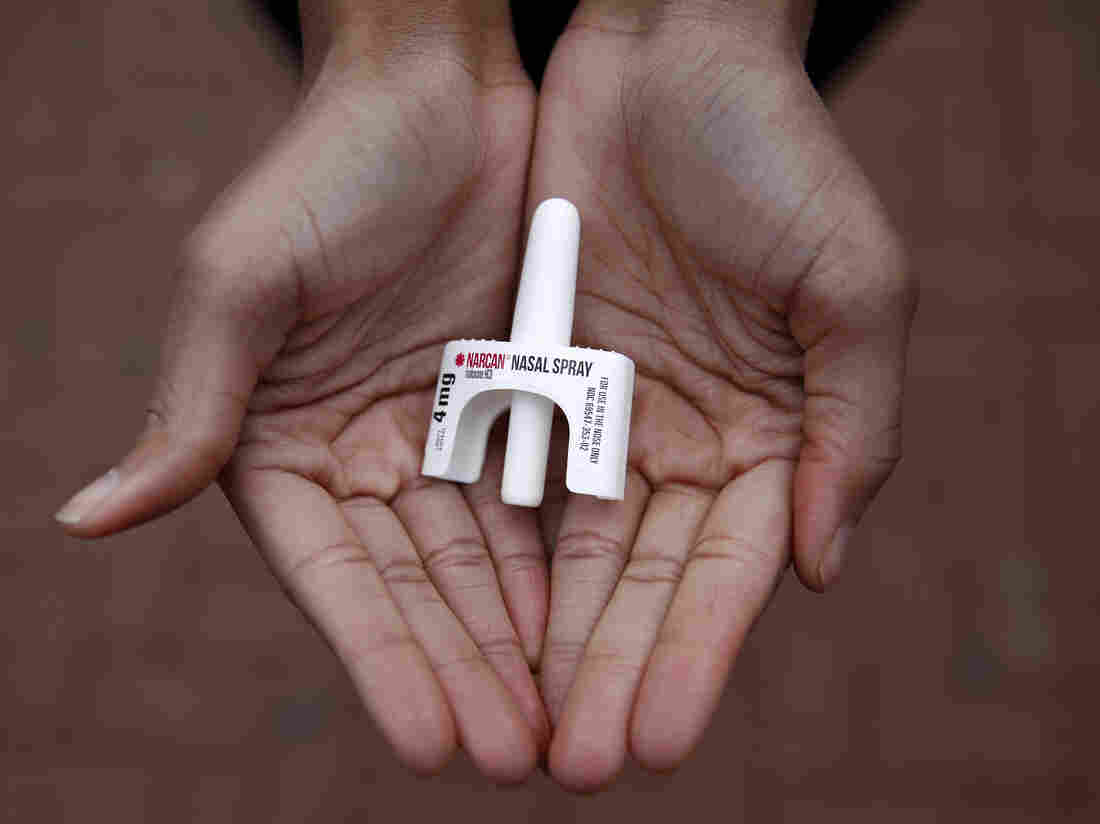 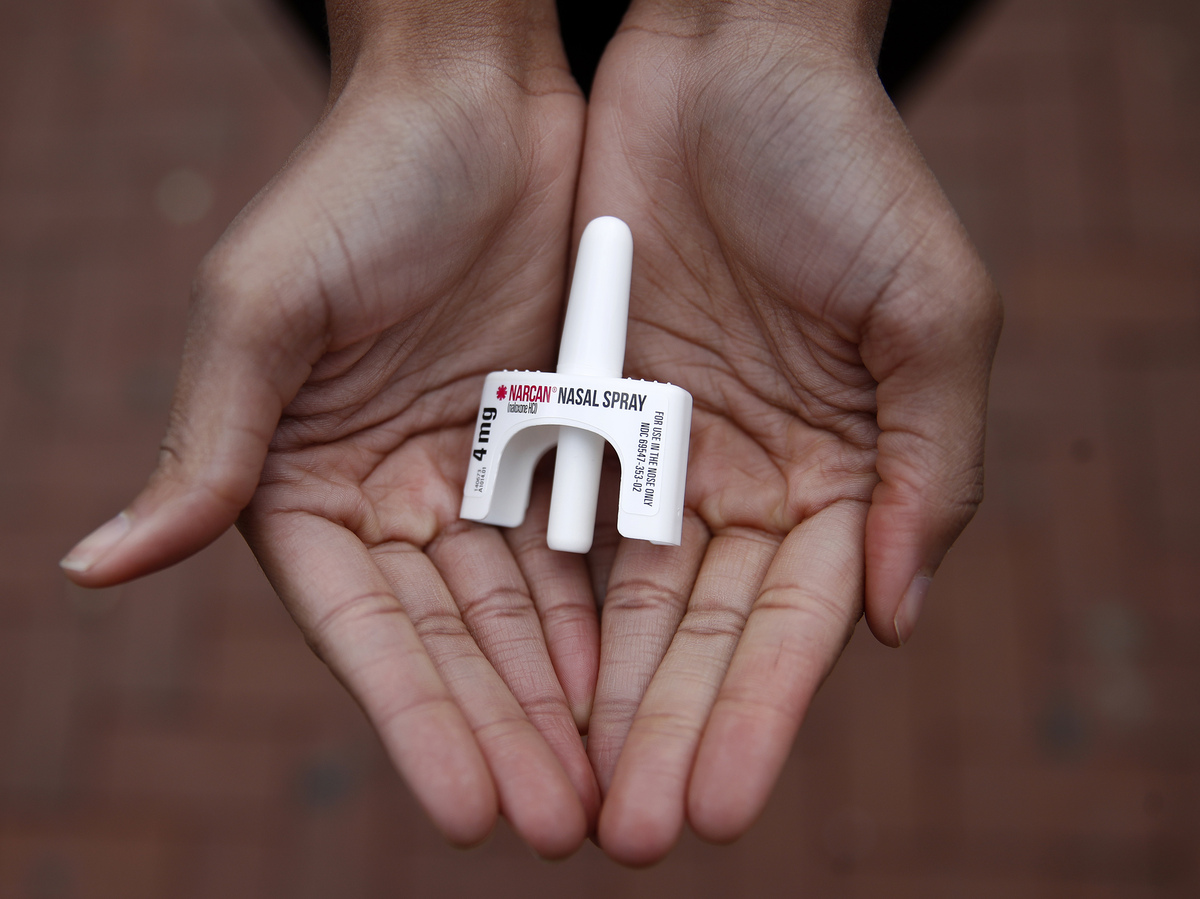 Earlier this year, the Centers for Disease Control and Prevention released a stunning statistic. Seventy-two thousand people, it estimates, died of drug overdoses in 2017. The huge increase in deaths is largely due to heroin and powerful synthetic opioids like fentanyl.

One of the tools being used to fight that wave of deaths is the drug naloxone. It's been called the Lazarus drug for its ability to revive people dying from overdoses. It can be injected or simply administered through a nasal spray. (The spray form of the drug is known by the brand name Narcan.)

Twenty-four-year-old Tiffany — whose last name is being withheld to protect her privacy — owes her life to naloxone.

Each time she overdosed, Tiffany was revived with naloxone.

Another heroin user, James, says he has also been brought back with naloxone, and that he's used the drug on friends who "fall out," or lose consciousness.

"I've got five or six nasal spray Narcans up in my room, so if someone else falls out around me, when you shoot it up their nose, not even ten, fifteen seconds later, they are back," he says.

Tiffany and James say naloxone has not changed the way they think about heroin, but both have friends who treat naloxone like a safety net. Tiffany says she has one friend who assumes that "if he overdoses, someone will come give him Narcan and bring him back."

But would her friend stop using heroin if he didn't have Narcan?

The possibility that naloxone might lead to greater risk taking among drug users prompted two economists to study the issue. Their controversial and hotly-debated findings suggest naloxone not only increases risky drug use but may actually cause more deaths than it saves. Public health researchers say these findings are based on flawed data and analyses.

This week on Hidden Brain, we talk with users, families, and researchers about risky drug use. We'll try to understand the complex risk/benefit calculations involved in opioid use, and why there's still so much we're struggling to understand about addiction.

In this story, Jasmine Pierce, an overdose response coordinator for the Anne Arundel County Department of Health, says that county officials "provide gloves inside of the kits... to protect you from any type of contamination because, with both of those drugs, they can actually seep through your skin with skin-to-skin contact, and you can overdose yourself."

Here's what the CDC has to say about the risks to first responders:

"Fentanyl and its analogues pose a potential hazard to a variety of responders who could come into contact with these drugs in the course of their work. Possible exposure routes to fentanyl and its analogues can vary based on the source and form of the drug. Responders are most likely to encounter illicitly manufactured fentanyl and its analogues in powder, tablet, and liquid form. Potential exposure routes of greatest concern include inhalation, mucous membrane contact, ingestion, and percutaneous exposure (e.g., needlestick). Any of these exposure routes can potentially result in a variety of symptoms that can include the rapid onset of life-threatening respiratory depression. Skin contact is also a potential exposure route, but is not likely to lead to overdose unless large volumes of highly concentrated powder are encountered over an extended period of time. Brief skin contact with fentanyl or its analogues is not expected to lead to toxic effects if any visible contamination is promptly removed. There are no established federal or consensus occupational exposure limits for fentanyl or its analogues."

You can also read this statement from the American College of Medical Toxicologists, which says that "the risk of clinically significant exposure to emergency responders is extremely low."

With a Little Help from My Friends: The Effects of Naloxone Access and Good Samaritan laws on Opioid Related Deaths, by Daniel I. Rees, Joseph J. Sabia, Laura Argys, Joshua Latshaw, & Dhaval Dave

Hidden Brain is hosted by Shankar Vedantam and produced by Jennifer Schmidt, Parth Shah, Rhaina Cohen, Thomas Lu, and Laura Kwerel. Our supervising producer is Tara Boyle. Camila Vargas-Restrepo is our intern. You can also follow us on Twitter @hiddenbrain, and listen for Hidden Brain stories each week on your local public radio station.