Accessibility links
What's Changed And What Hasn't When It Comes To The Flint Water Crisis In Flint, Mich., many people are still drinking only bottled water, several years after the water crisis began. Flint residents talk about what's changed — and what hasn't.

In Flint, Mich., many people are still drinking only bottled water, several years after the water crisis began. Flint residents talk about what's changed — and what hasn't. 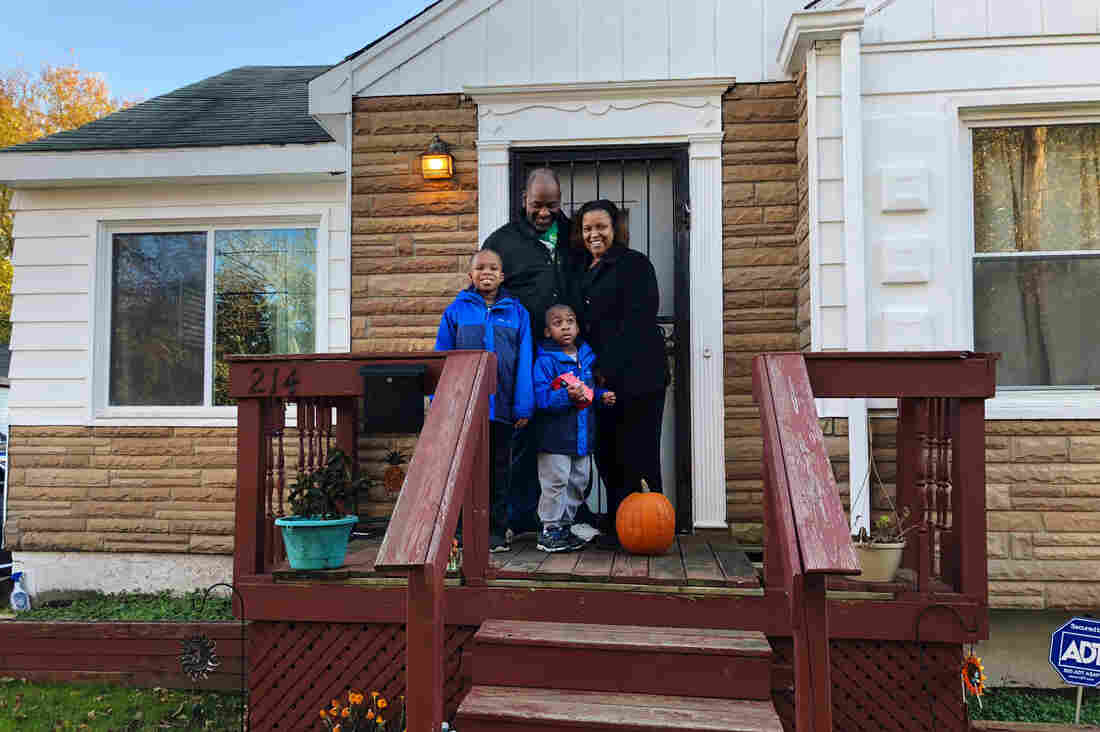 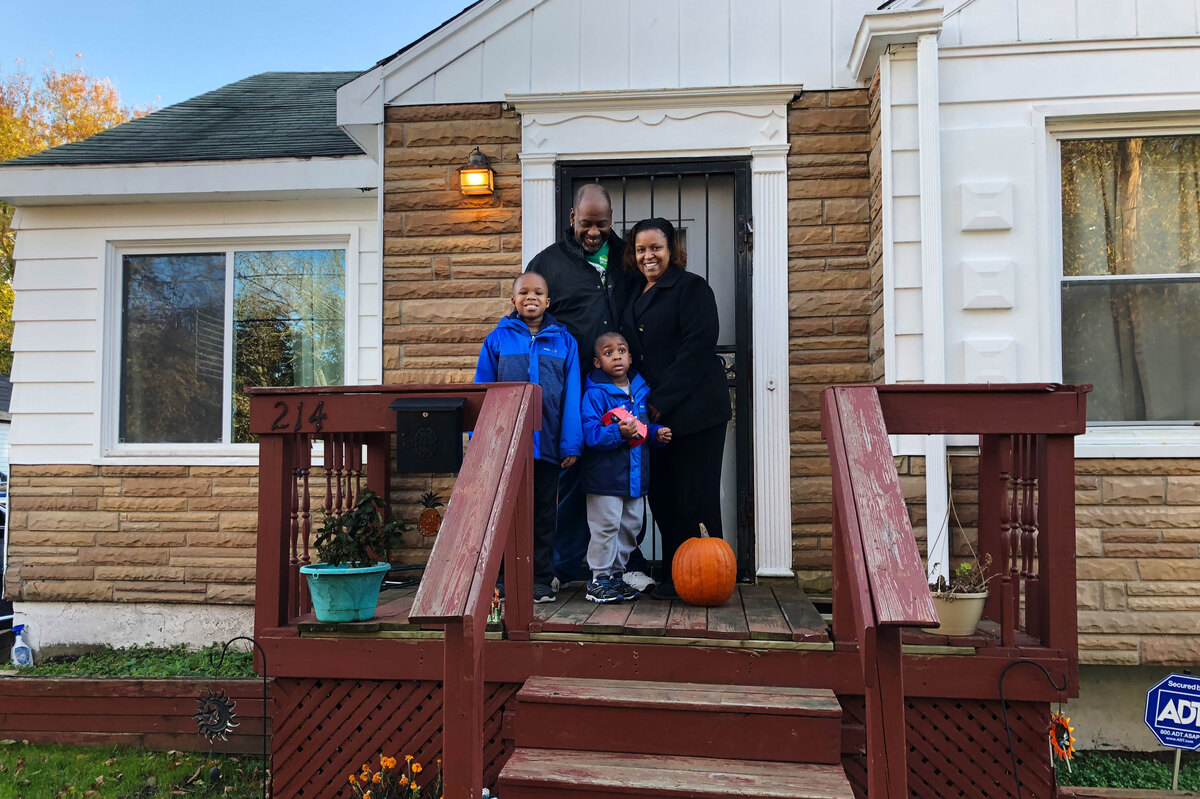 Flint residents Earl (left) and Jeneyah McDonald still purchase bottled water for drinking and cooking. Their sons, Justice, 9, and Josiah, 5, have grown up in Flint as the water crisis unfolded.

And I'm Ari Shapiro at Michigan Radio in Ann Arbor. Monday night in the city of Flint, people pulled up in their cars to the Asbury United Methodist Church. They slept in a long line of vehicles, hoping to be near the front when volunteers started handing out pallets of bottled water at 10 a.m. Tuesday morning.

UNIDENTIFIED VOLUNTEER #1: What? You going to put something in the back seat?

KALEKA LEWIS HARRIS: The line was, like, seven or eight blocks. We have about 400 to 600 people to come through the lines.

SHAPIRO: Kaleka Lewis Harris goes by Miss K. She coordinates this help center. It's one of three that pop up in the city on different days of the week.

SHAPIRO: In 2014, the state switched Flint's water supply in an effort to save money. Water from the Flint River came out of people's taps looking brown and smelling like sewage. Government leaders at all levels told people the water was safe. It wasn't. The improperly treated water corroded old pipes that leached lead into faucets and showers. Kids were poisoned with lead.

The state provided free bottled water for two years, until April. And now, after switching back to the original water supply, the state once again says the tap water is safe to drink. Companies and charities donated these pallets of bottled water. Miss K says there isn't enough for everybody who lines up to get some.

SHAPIRO: Do you still live in Flint? Do you use the water?

HARRIS: I still live in Flint. I do. I use the water not to drink but to bathe.

SHAPIRO: So when you're cooking, when you're brushing your teeth, you're still opening bottles of water.

SHAPIRO: And have been doing it for years.

SHAPIRO: Does it just feel routine now, or does it still feel like, I can't believe I'm doing this?

SHAPIRO: And when the government says, look; we've done the tests; there's safe levels of lead; it's OK, you just don't believe it.

SHAPIRO: Flint's mayor supports her view, arguing that the water won't be safe until all of Flint's corroded lead pipes have been replaced and the medical community signs off on it. Until that happens, people are still lining up to get water wherever they can.

LARKIN MUWWAKKIL: I'd guess it's something you have to live with for now, you know? The - come out every week and get water, you know?

SHAPIRO: Larkin Muwwakkil is 72, inching forward in his car.

MUWWAKKIL: I used to get my water delivered because I was a senior. They used to bring my water to me at my house. You know?

SHAPIRO: It's heavy work lifting all those cases of water.

MUWWAKKIL: Well, I - well, when they would deliver, they would bring it right inside for me.

SHAPIRO: But not anymore.

MUWWAKKIL: No. This here, when I get home, I got to take it out myself. (Laughter) You know?

SHAPIRO: Flint, Mich., is one of the poorest cities in the country. More than 40 percent of people here live below the poverty line. It's also more than 50 percent black. At this church, Pastor Rigel Dawson says the poisoned water was just the latest setback.

RIGEL DAWSON: The water crisis was one more thing on top of a whole lot that this community's had to deal with - the disinvestment, the jobs going away. And so this was, like, almost the straw that broke the camel's back, you know, in a lot of ways. But we're resilient. You know, the people here are strong. And we keep moving forward.

SHAPIRO: Some of the workers digging up the median here are wearing bright yellow vests that say City of Flint FAST Start with an image of a wrench and a faucet. They've been at this for years, and they are nowhere near close to replacing all of the pipes that need to be dug out.

SHAPIRO: Jeff Grayer is project manager for WT Stevens Construction, one of the companies the city has contracted to dig up the pipes. But when he says they're 75 percent done, he's only talking about the service lines between the house and the street. He's not including pipes in people's houses or the water mains under the road.

GRAYER: There's still quite a bit left to do, yes.

SHAPIRO: And in terms of when you can totally close the book and say, mission accomplished?

GRAYER: Yeah, (laughter) good question. We are hoping within a couple years mission will be accomplished.

SHAPIRO: Did you grow up in Flint, or is this a place...

GRAYER: Yes, this is home for me.

SHAPIRO: This is home for you.

GRAYER: This is home. I grew up here.

SHAPIRO: How personal is this job for you?

GRAYER: Very personal. I grew up on the north end. My entire family lives here in Flint.

SHAPIRO: Does your family have tough conversations where they yell at you, why isn't your crew at our house yet?

GRAYER: All the time.

SHAPIRO: The city says they're ahead of schedule on pipe replacement. The state of Michigan sent us a written statement saying Flint's water has tested safe for more than two years. In the Michigan governor's race, both candidates have talked about Flint on the campaign trail. Everybody we talked to in the city rolled their eyes at that.

JENEYAH MCDONALD: It's a great soundbite. Let's see what happens after November 6.

SHAPIRO: This is Jeneyah McDonald. I first met her almost three years ago when Flint was making national headlines for the water crisis. We've been checking in with her regularly as she and her husband raise two boys in the city. Today they use bottled water that they buy to cook and brush their teeth. They use filters on the shower to bathe. When I went to their house this week, it was the first time I'd heard Jeneyah express a little bit of hope. Her older son, Justice, had a skin condition the last time we were here.

MCDONALD: His eczema, his flare-ups are not as frequent. And when they do come, they're not as bad as they used to be.

SHAPIRO: I remember when we were here the first time, you said you were known for your long hair.

SHAPIRO: And it started coming out when you bathed in the water.

SHAPIRO: And it's growing longer now.

MCDONALD: It has. It has. It's almost to my shoulders now.

SHAPIRO: Justice was 6 when we first met him. Now, at age 9, he's smart and curious. He listens carefully to our interview with his mother and then jumps in.

JUSTICE MCDONALD: I also have a question.

JUSTICE: Why does the pipes break in Flint and in the others they don't?

MCDONALD: Well, it wasn't that our pipes broke in Flint. What happened was...

SHAPIRO: She goes into a long, fact-based explanation about the state government's decision to change water sources in an effort to save money. And later, when we're alone, she says that question from her son really threw her.

MCDONALD: It's his first time asking me that ever. And that kind of - that was a lot.

SHAPIRO: Is it hard to know what to say?

MCDONALD: It is. It is, and especially trying to contain my emotions 'cause I don't, you know, just want to break down in front of them 'cause they're not understanding, why is she so upset?

SHAPIRO: What's the answer that you would have given to that question if it had not been asked by one of your children?

MCDONALD: I probably - honestly, I feel like it was done on purpose because Flint is predominantly black. And who cares? I feel like it's pretty much where the nation is right now. You see young black boys getting murdered by white police officers all across the nation. So what do I think as a black mother raising black boys? How do I think a government that's predominantly white - how do they - they showed me what they feel about me and us here in Flint. They showed us.

Everyone want to say racism is not alive. It is so alive, and it's so sad. And I - you know, it's hard not to teach your kids about it without sounding racist. You know what I mean? I don't want my children to hate anyone because of the color of their skin. I just - I want to be careful when I'm answering things for him because I want him to be an adult that's able to change the world.

SHAPIRO: On one level, this story in Flint is about water. But on another level, it's about trust in government, feeling like your voice matters and that elected leaders care about you. Pipes are hard to fix. Those other things are even harder.

(SOUNDBITE OF NIGHTMARES ON WAX'S "CHIME OUT")