Accessibility links
Trump, Republicans Continue Remaking The Federal Courts — Even As Senate On Recess This October, the Senate Judiciary Committee has, for the first time ever, held judicial nomination hearings during a recess of the Senate — over the objections of the minority party. 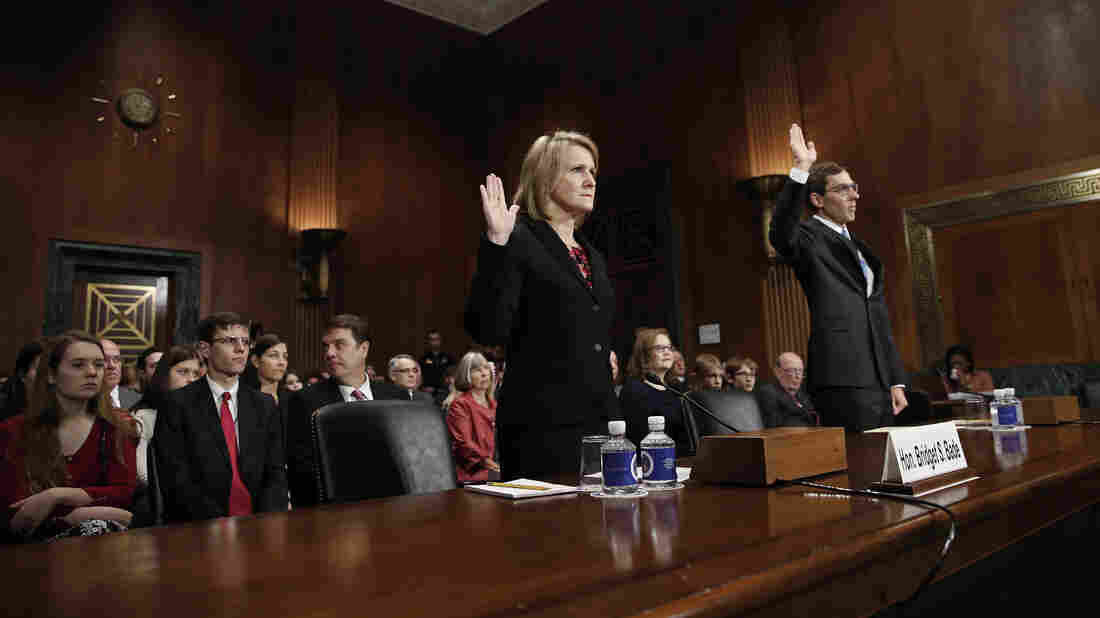 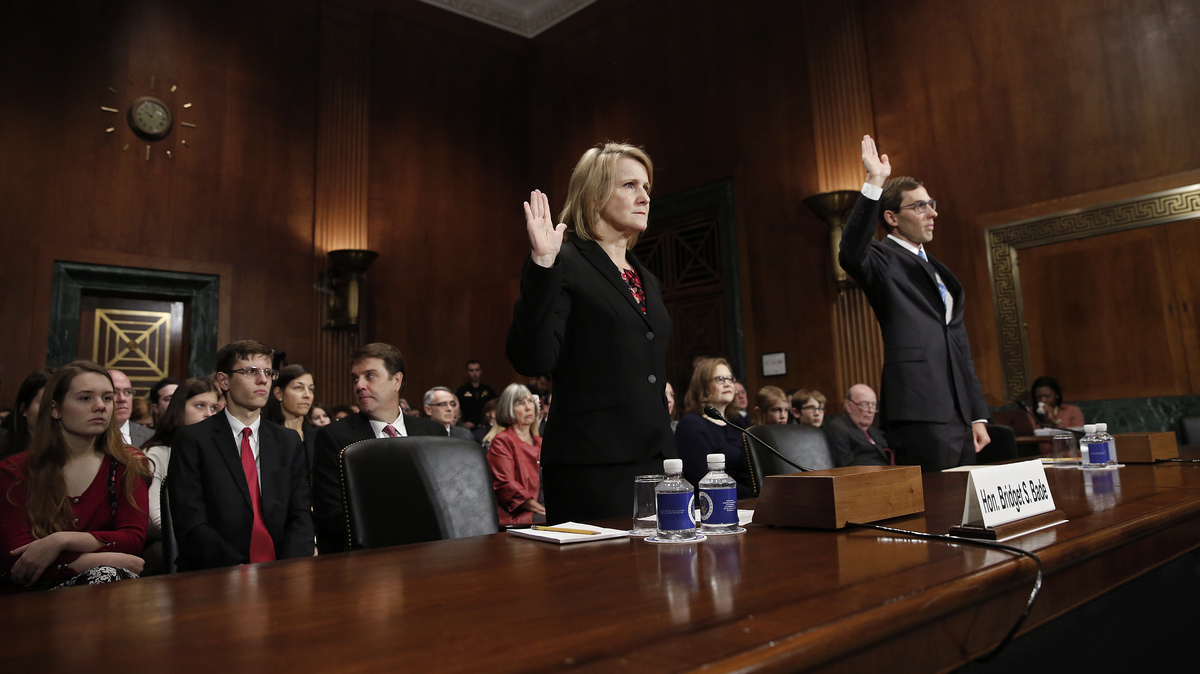 Appellate court nominees Bridget S. Bade and Eric D. Miller are sworn in during a hearing held by the Senate Judiciary Committee on Wednesday. Only two senators — Mike Crapo, R-Idaho, and Orrin Hatch, R-Utah — were in attendance.

President Trump and Senate Republicans are remaking the federal courts in their own image.

Prior to the Trump administration, there was plenty of tit for tat in the escalating partisan wars over judicial nominations. But these tactics were aimed at blocking nominees. Since Trump was sworn in, however, the GOP Senate leadership has moved aggressively to speed confirmation of new judges, casting aside long-existing practices and traditions that ensured some consensus in picking the judges who sit on the federal courts of appeal.

Gone, for all practical purposes, is the tradition that prevented action on a judicial nominee who was not approved by his or her home state senators. Gone is the practice of not holding a confirmation hearing until the American Bar Association has completed its professional evaluation of the nominee. Gone is the general practice of not piling up multiple nominees in one hearing. And now, for the first time, the Senate Judiciary Committee is holding confirmation hearings during a Senate recess, over the objections of the minority party.

No other Senate committee has been holding hearings during the current recess. But for judicial nominees, the Senate confirmation train keeps on running — even though, and likely because, Senate Democrats can't be there. The Democrats and allied independents are defending 26 seats in next month's elections and have to campaign during the final weeks before the midterms.

Kavanaugh Debuts On Supreme Court, Pledging To Be A 'Team Player'

This week, just two senators — Republicans Orrin Hatch of Utah, who is retiring, and Mike Crapo of Idaho — showed up at the hearing for two appeals court nominees. The senators excused the nominees after just 19 minutes, several minutes of which were consumed by one controversial nominee talking about his wife, parents, children and even his cat.

Hatch, who chaired the Judiciary Committee for eight years, never held a recess hearing for a federal judge nominee. When asked this week why Republicans went ahead this time, he said, "We have to move ahead, and if they're not cooperating, you just go ahead."

With Kavanaugh Confirmed, Both Sides Of Abortion Debate Gear Up For Battle

Going ahead has yielded substantial results for the Republicans over the past two years.

The GOP-controlled Senate has confirmed 29 Trump nominees to federal appeals courts, compared with the confirmation of just two nominees over the last two years of the Obama presidency. In all, Trump-appointed judges now represent an astonishing one-sixth of the sitting, active federal appeals court judges in the country. 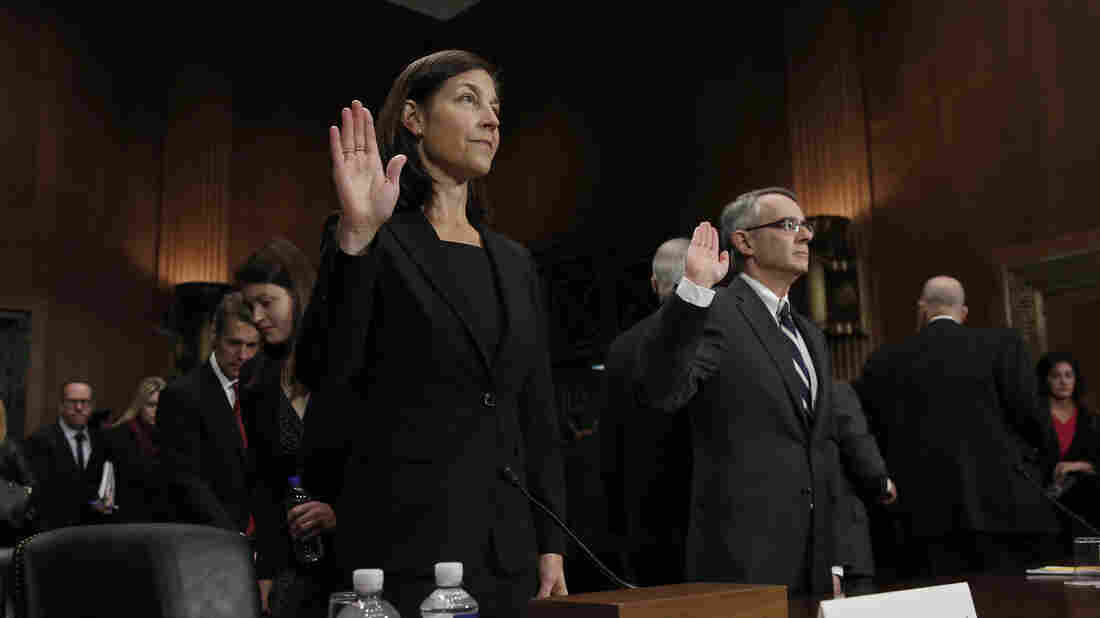 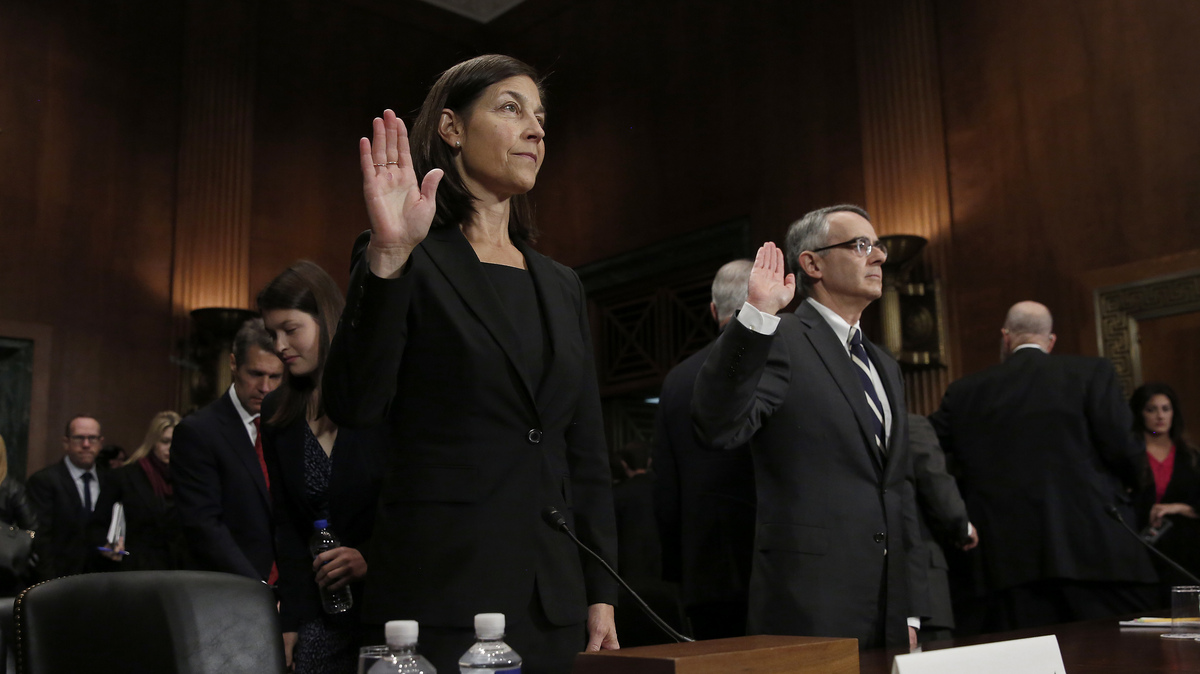 Judicial nominees Karin J. Immergut and Richard A. Hertling also were the subject of sparsely attended hearings of the Senate Judiciary Committee this week.

The federal appeals courts decide cases involving a broad range of issues, from Social Security or veterans benefit claims to more high-profile cases involving, for example, voting rights, abortion or religious freedom. For most litigants, these turn out to be the courts of last resort; they decide 27,000 cases each year, compared with fewer than 100 decided by the Supreme Court.

Vermont Sen. Patrick Leahy, who chaired the Judiciary Committee for a total of 10 years while Democrats were in the majority, is "disgusted" by what he sees as the dismantling of a long-standing system that was aimed at achieving a limited bipartisan consensus on judgeships. The new partisan process "is eventually just going to make the federal courts look not independent but political," he says. "And that's going to hurt everybody."

Kennedy asked Rushing to name some midlevel and senior partners at her firm whom she admires. When Rushing did so, Kennedy replied, "I don't mean to offend you but ...Why shouldn't we appoint them? They've been at it awhile. They've had a little life experience. They've had disappointments. They've had to pick themselves up and get back on their feet and keep going. They've experienced a little bit of life."

Kennedy would not say after that hearing whether he would vote to confirm Rushing.