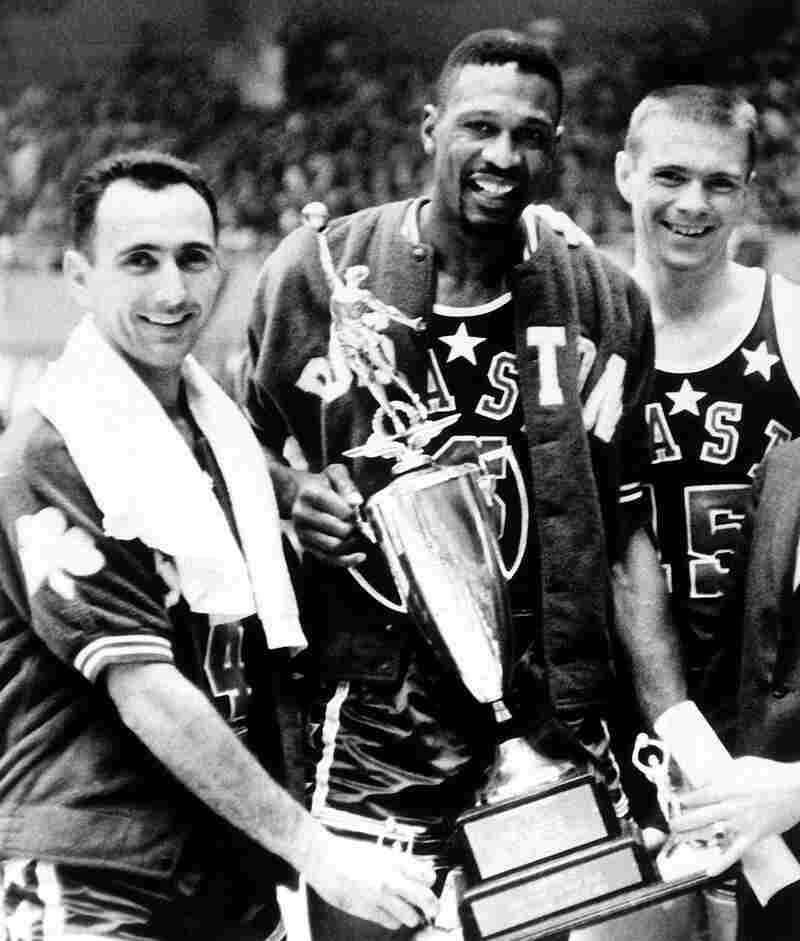 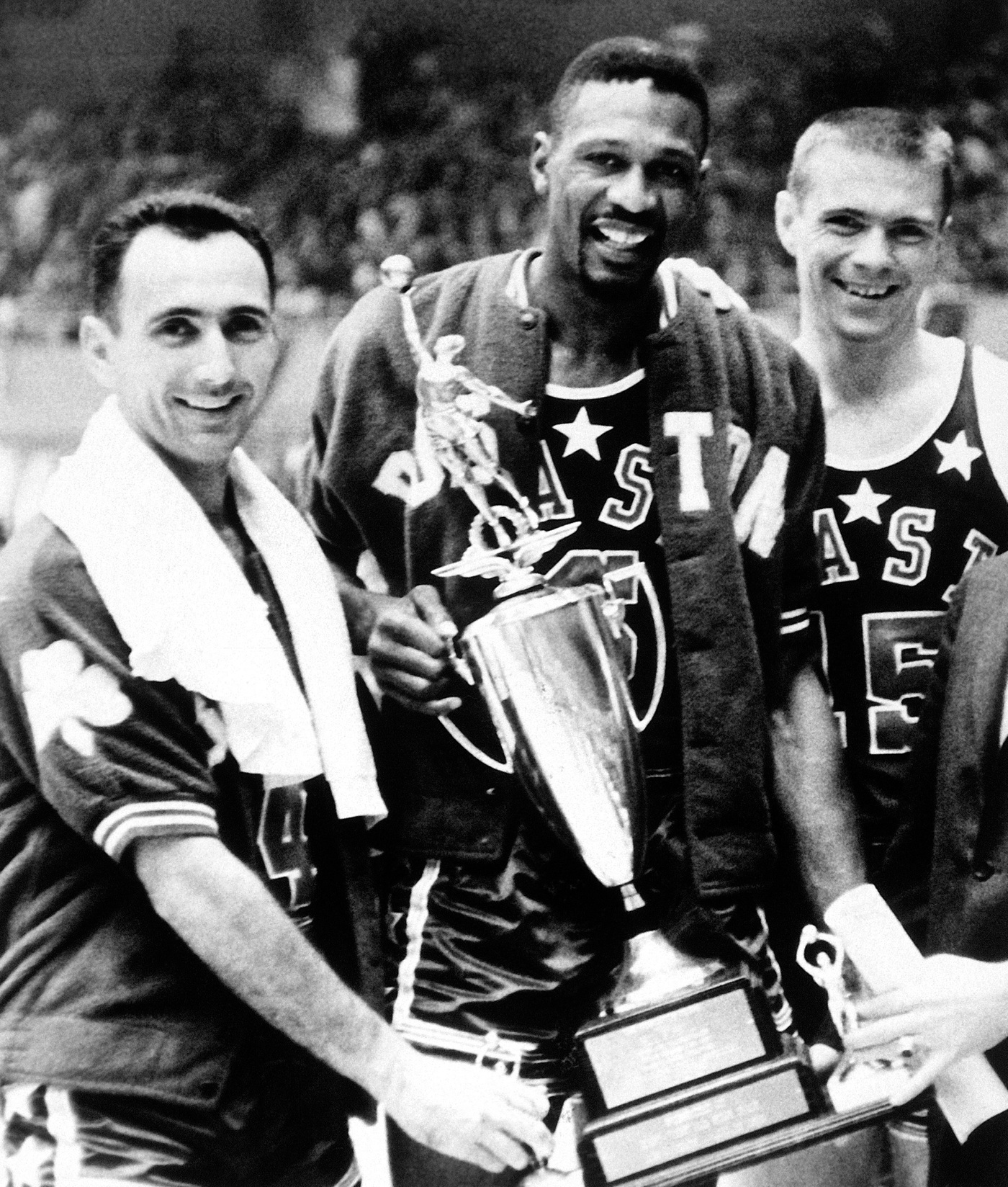 The duo of Bob Cousy and Bill Russell was one of the greatest to ever hit the basketball court.

Together, they won six NBA championships for the Boston Celtics in the 1950s and '60s, and buttressed a dynasty that would win 11 titles in total.

Bob Cousy was the point guard: listed as 6 foot, 1 inch, he was a white man who grew up the son of poor French immigrants to Manhattan. Bill Russell was the center: standing 6 feet, 10 inches tall, he was a black man born in segregated Louisiana.

"What was exquisite to watch ... was Russell getting the rebound, turning, throwing and the outlet pass to Cousy — sometimes before Russell's feet had hit the ground — and then Cousy turning, taking that photograph in his mind of where players were," says historian and journalist Gary Pomerantz says in a joint interview with Cousy. "And he was the gold standard on running the fast break."

They became teammates in 1957, just after Martin Luther King Jr.'s Montgomery bus boycott, and would play together through turbulent times of the civil rights movement — in Boston, a city roiled by bigotry.

Pomerantz has written a book about the Cousy-Russell partnership, and about the regrets that Cousy, now 90 years old, still has about the plays he didn't make off the court. It's called The Last Pass: Cousy, Russell, the Celtics, and What Matters in the End.

"Most great athletes, as they grow older, embellish and burnish the stories they tell about themselves," Pomerantz says. "You know, the fish they caught keeps growing and growing, and soon it's a whale. But Bob Cousy is different. He's not doing that. He is admitting his flaws. He's even drawing attention to 'em. He's saying, 'This is what I did.' And his final declaration is: 'I did not do enough.'"

On playing on a racially integrated Celtics team in the 1950s 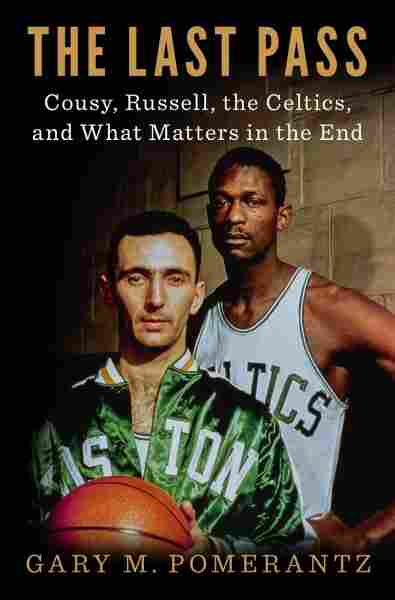 Cousy, Russell, the Celtics, and What Matters in the End

Title
The Last Pass
Subtitle
Cousy, Russell, the Celtics, and What Matters in the End
Author
Gary M. Pomerantz

Cousy: I'm 90 years old. I still, Scott, I cannot understand why you hate one person because of the color of their eyes or their skin or their hair, and therefore you hate all people who have that color hair, you know? It's so irrational. But I give the credit really to my Jesuit education for kind of focusing in for me, so when it came time to deal with it, in this case on a professional sports level, I was — at least my opinions and my attitudes were pretty much set.

On the responses of Russell and Cousy to racism

Pomerantz: Russell spoke out about social injustice. He was very rare among athletes of his time — of any time really. You know, at that time, Muhammad Ali the boxer, and Jim Brown in football, and Bill Russell — he called out the NBA, properly so, for its racial quotas, limiting the opportunities for African-American players. And he became fully engaged in the civil rights struggle.

Simon: We should explain — you obviously spent a lot of time talking with Bob Cousy. Bill Russell just doesn't talk to people these days, does he?

Pomerantz: Well, you know, when he played games in St. Louis for instance, he would hear the screams, the catcalls from fans. You know, "black gorilla," "baboon": horrible, racist stuff. And at home in Boston, he faced the racist heat as well. There was one moment when vandals broke into his home, for instance, spray-painted racist graffiti on the wall and defecated on his bed. Just horrid stuff. And Bill Russell would later say, more than once, that he played for the Celtics — he didn't play for Boston.

Simon: Bob Cousy, did you know any of that was going on?

Cousy: Oh yeah. Well, we were part of it, obviously, when it happened in public. We wouldn't sit there and discuss these issues, Scott. I think it was a personality thing ... I was timid, he was angry. You know, neither one of us ever said, after a game, "Let's go and have a few beers together."

Simon: And when you retired, Mr. Cousy, a few years before Bill Russell did, he was deeply moved. He called you, I think, the best man he'd ever met, if I'm not mistaken.

Cousy: Well, you know, we shared — I didn't know that at the time. Guys don't have meaningful conversation — they just don't. We mature later in life. That's why — I hope the ladies take over the world pretty soon because we've kind of screwed it up for 2,000 years.

On the letter he wrote to Russell a few years ago, after reading Ta-Nehisi Coates' Between the World and Me

I wanted to do a mea culpa to Russ anyway. So I dropped him a note saying, "Russ, I know you and I weren't pen pals. And I'm sorry for that." I said, "I know we weren't that close when you came to the team in '56. I was the man, I had the media in the palm of my hand. You know, looking back on it, I should have done more to share your pain. I'm sorry I didn't." So I did a mea culpa, and I said, "Please enjoy this book — it's very powerful." And that was it.

Anyway, he didn't respond until about three weeks ago. The phone rang late at night, so I picked up and I heard this voice say, "Bob Cousy, this is Bill Russell. I'm calling to see how you're doing." And we talked — well, I did most of the talking; poor Russ' hearing is just about gone, so it was a difficult conversation. But I did say to him, "Russ, I sent you a letter three years ago. You're a little late respond--" whatever. And he said, "No, we got the letter. Thank you very much. But I didn't read the book." [laughing]

On a Jim Crow situation he faced with his friend and teammate Chuck Cooper, the first black player drafted into the NBA

We were playing in Raleigh, North Carolina, and the hotel won't take Coop [Chuck Cooper]. And Arnold [coach Arnold "Red" Auerbach], who was a fighter, wanted to raise hell and make an issue out of it. Chuck and I found out there was a sleeper [train] going through town after the game ...

So anyway, we played the game, Chuck and I went to Union Station. Jocks didn't have bad habits in those days — we didn't sniff anything, we didn't inject, we didn't even put an Aspirin in our month, we were so afraid. But we did drink a hell of a lot of beer.

So we went to Union Station, we had three or four beers. It got to be midnight, and obviously we had to whiz. So we went looking for the men's room in Union Station. And it's the first time, strangely enough, that either one of us had been faced with this. Chuck was from Pittsburgh, thought he was pretty cool; I was from the Big Apple, so I thought I was pretty sophisticated. And we see the big white signs with the big black arrow: "Colored," one way; "White," the other way. And I teared up, 'cause I couldn't — I was ashamed to be white. I didn't know how to explain this. So now my good friend of two or three years — how the hell do I tell him we can't go and pee together?

So I solved the problem. I took him out — it was midnight out on the platform, not a lot of people around — we went to the end of the platform and we peed together, Scott. It was a Rosa Parks moment that we couldn't talk about.

Peter Breslow and Ed McNulty produced and edited this story for broadcast. Patrick Jarenwattananon adapted it for the Web.