Accessibility links
Inside The Ever-Expanding Wizarding World: Harry Potter At 20 It's hard to remember a world before Harry Potter. But it's been 20 years since readers in the U.S. were first introduced to the boy wizard, whose story has captivated audiences since.

In the jacket art for Harry Potter and the Deathly Hallows, Harry faces off against Voldemort. It's among the items on display in a new exhibit at the New-York Historical Society. Mary GrandPré/Courtesy of Warner Bros. Corporate Archive hide caption

In the jacket art for Harry Potter and the Deathly Hallows, Harry faces off against Voldemort. It's among the items on display in a new exhibit at the New-York Historical Society.

It's hard to remember a world before Harry Potter. The children's book series is a juggernaut that spawned a film series, theme parks, a Broadway play and museum exhibits. It's been 20 years since readers in the U.S. were first introduced to the wizarding world, and more than 500 million copies of the books have been sold worldwide.

The series is still intensely personal for the boys and girls who have read, and still read the books. It's also had a deep impact on what children read.

At the New York Historical Society, a new exhibit called "Harry Potter: A History of Magic" traces the roots of author J.K. Rowling's novels — and it's filled with Potterheads of all ages. Inside the museum, curator Roberta Olson is justifiably proud to show what she's got.

On Harry Potter's 20th Anniversary, Listen To His NPR Debut

"We have all kinds of basilisks here," Olson says. "Unbelievable objects. The sphinx, you can touch."

There are books flying overhead, tinkling music coming from a crystal ball, the shadows of unicorns and hippogriffs. There are also centuries-old objects that J.K. Rowling used for inspiration.

That includes Bezoars, or rather, "stones" formed in the stomachs of goats, thought to be antidotes to poison — they're real. So are mandrakes, though it's unclear if they actually scream.

"They were used to cure things like headaches, migraines, gout," Olson says. "They were also an aphrodisiac, and that's what Harry would have learned in herbology classes." 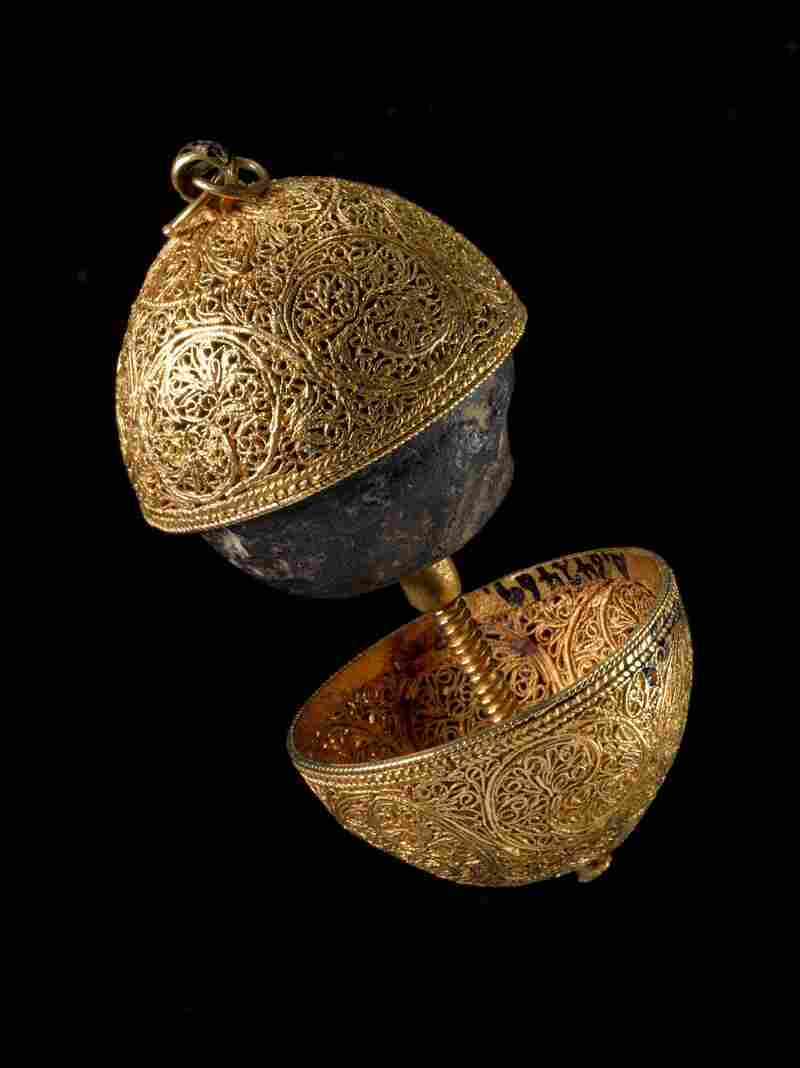 A bezoar, encased in a gold filigree shell, is a "stone" of indigestible mass formed in the guts of animals. They were once believed to be antidotes to poison — and play that role in the Harry Potter universe. Courtesy of The Board of the Trustees of the Science Museum, London hide caption

toggle caption
Courtesy of The Board of the Trustees of the Science Museum, London 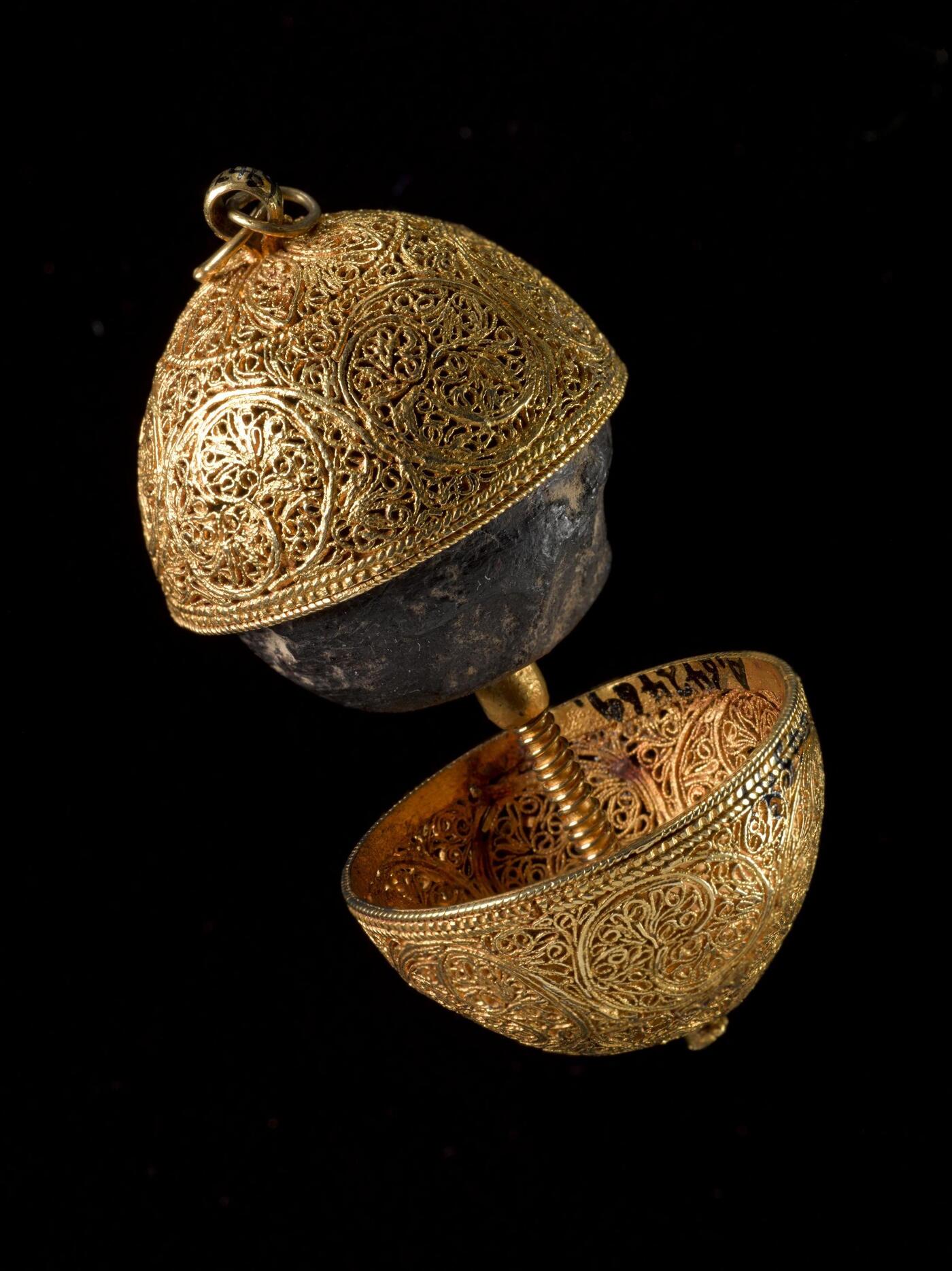 A bezoar, encased in a gold filigree shell, is a "stone" of indigestible mass formed in the guts of animals. They were once believed to be antidotes to poison — and play that role in the Harry Potter universe.

Courtesy of The Board of the Trustees of the Science Museum, London

In addition to the magic, there's the more mundane spellwork — Rowling's detailed plot diagrams, and original drawings on napkins where she conceived the characters. There's a book review from the 8-year-old daughter of Nigel Newton, head of Bloomsbury Publishing. He'd given her the manuscript to review; she said it was the best book she'd ever read. Bloomsbury issued the contract the next day.

The reviews are still good. Adalie Tyau, 10, has read all the books 11 times, she says.

"I just like it because it's like, it makes our world feel kind of boring, and it's so creative. All the candy and Hogwarts and everything. So I really like it," Tyau says.

Harry Potter Inc. Hopes To Re-Create The Magic, Hogwarts And All, With 'Cursed Child'

"They just are magical and it's cool to think about all the different things that aren't really happening, but you can imagine yourself there, and having the experiences that the characters are," Kruemmel says.

There are kids at the exhibit, and their parents. But there are also college students, and couples, entire families.

When asked what other books they have enjoyed, they say The Chronicles of Narnia series and A Wrinkle In Time, and a lot of young people mention author Rick Riordan, who wrote the Percy Jackson series.

But almost every person says the Harry Potter books are unique. There's nothing else like them. They read and re-read, pore over details, and never really get over them.

Apparating across the pond

Arthur Levine is the editor who's responsible for bringing Harry Potter to the U.S. In his office at his imprint — Arthur A. Levine Books — he has some of his memorabilia.

"Once upon a time I was a 20 years younger man and I was walking around the Bologna [Children's] Book Fair being very highfalutin and saying to each person that I was meeting with 'What I'm looking for are books that will stand the test of time, ' " Levine says.

Levine found the manuscript at the book fair that day. It was the last manuscript he received from the Bloomsbury publishing house. He took it, read it on the plane and was immediately hooked.

"It was the fact that he was me," Levine says. "Even though I was not an orphan and I'm not English. But what I could relate to so strongly was this idea that maybe there's something inside of you that nobody else can see."

Had the series existed when he was little, Levine says it "would have bee a huge thing in my life."

"As a little gay kid growing up, you know, and there isn't much that is explicitly gay in Harry Potter, but the idea of the goodness and rightness of who you are is not necessarily mirrored in society," Levine says.

"There was no market for hardcover children's fiction. Fantasy was not a hot sexy thing. This was just a great book," Levine says. "And I fought for it despite the fact that there wasn't an obvious immediate gratification in terms of business.

Of course, his bet paid off — Harry Potter became a publishing phenomenon. They sold so well that The New York Times Book Review began printing a separate best-seller list for children's books — because of complaints that the Harry Potter books had pushed adult titles off the lists.

"Everybody wanted that next book," Levine says. "It wasn't just like the two nerdy readers and you know the class. It was the whole class."

It appealed to a wide variety of readers, although it didn't reflect every reader. The three main characters in the books are white, and while there are casual references to the ethnic backgrounds of some of the ancillary characters, the experience of the British boarding school — magic or not — is a fairly narrow one.

Levine acknowledges this, but says that the series did create a new generation of readers — and therefore writers, editors and other gatekeepers — of all backgrounds.

"All of my editors now were people who had grown up with loving Harry Potter, and that love made like sparked this idea, 'I want to make books that will do that,' " Levine says.

One of those people is Kait Feldmann, 26, an associate editor at the Arthur A. Levine imprint. She says she connected to the series through the friendships she saw.

"I love that there was this thread of very young people having the power to make a difference," Feldmann says.

And now Feldmann says she's working to make a difference through her editing.

"As an editor, I certainly am looking for books that will also reflect a myriad of identities," she says. "As a Chinese girl growing up, [I] didn't always see that direct experience of mine reflected in books and that's definitely something I want to see open up in the world."

But children's literature still has a long way to go when it come to diversity. Librarian Kathleen Horning, director of the Cooperative Children's Book Center at the University of Wisconsin, says things haven't really changed in the last 20 years.

"What we don't see a lot of with diversity are books like Harry Potter, that are just pure fantasy," Horning says. "And, in fact, those are the kind of books that African-American children, for example, really are clamoring for."

And that's not to say that some series and books featuring diverse characters haven't done well. Some recent titles, including Dread Nation by Justina Ireland and The Akata Witch series by Nnedi Okorafor, have been breakouts, grabbing kids' attention.

Back at the History of Magic Exhibit — Kaitlyn Kruemmel is still heavily invested in her love of Harry Potter. But she's also branching out.

"I've read other books about magic that are kind of similar, but in a different way," she says. "Like Children of Blood and Bone, that's a new good book. And it's about magic in the same way and younger people."

NPR's Samantha Balaban produced the audio version of this story. Wynne Davis adapted it for the Web.