Accessibility links
October Is Almost Over. Have We Had Enough 'Surprises' Yet? Everyone in politics either dreads or dreams of the "October surprise," the late-in-campaign event or issue that suddenly upends all calculations and delivers electoral victory.

October Is Almost Over. Have We Had Enough 'Surprises' Yet?

October Is Almost Over. Have We Had Enough 'Surprises' Yet? 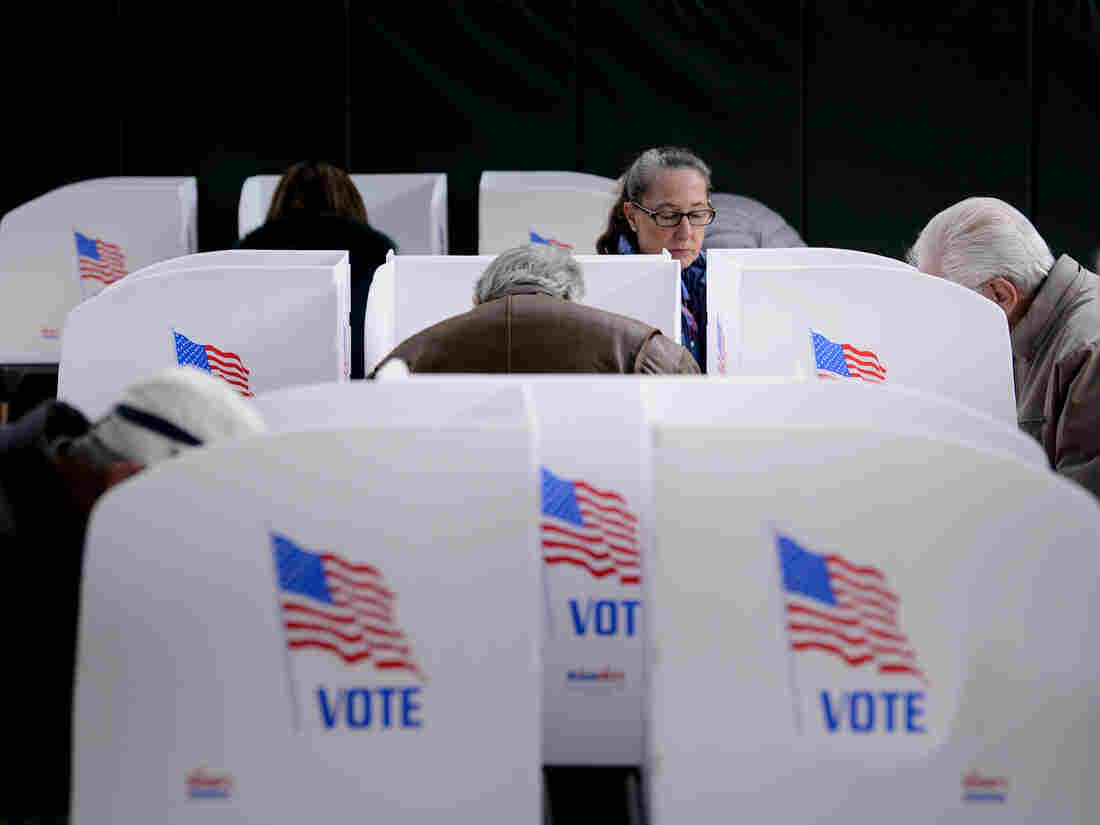 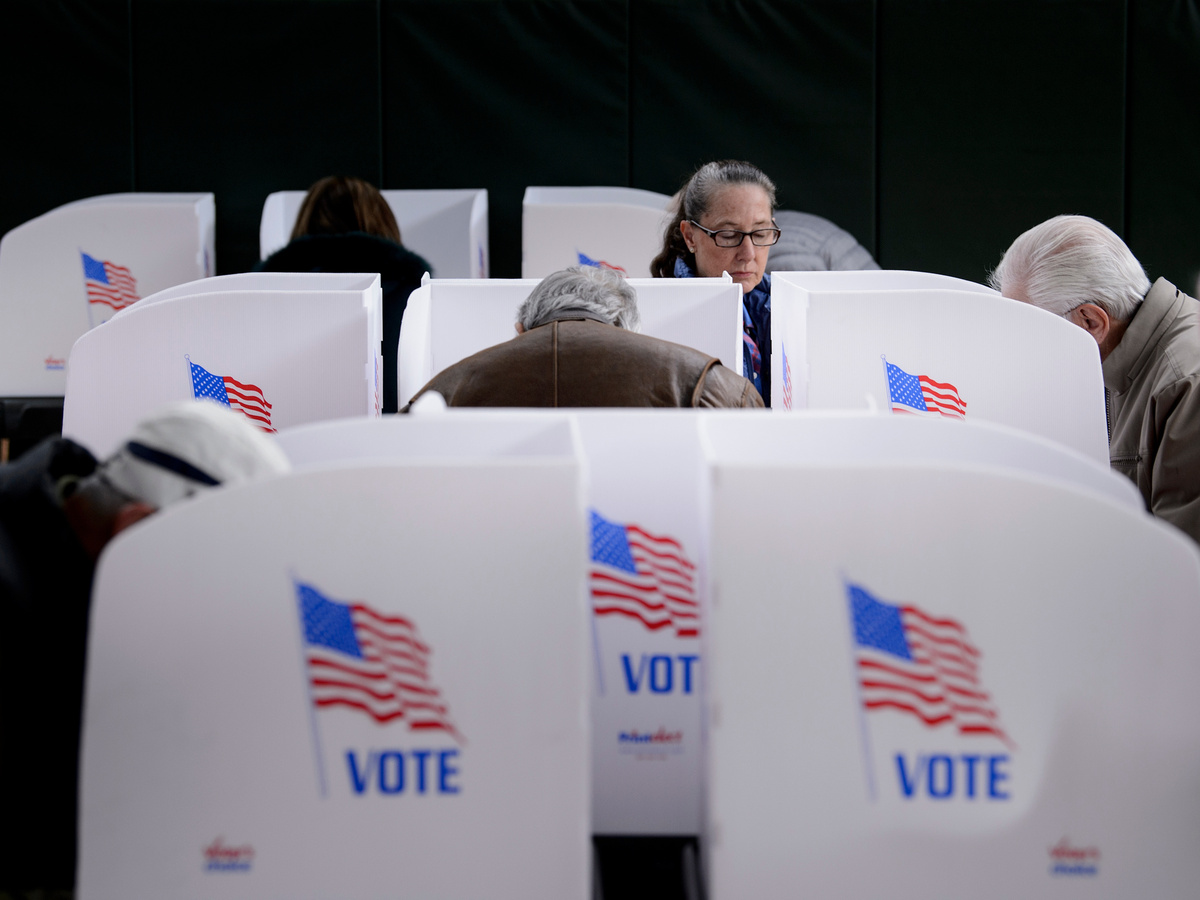 Voters in Potomac, Maryland cast their ballots during early voting two weeks ahead of the 2018 midterm elections.

It has been the kind of month you don't want to remember.

Killing in a synagogue. Explosives in the mail. Deadly hurricanes. A grisly murder of a journalist inside a foreign consulate.

Troops ordered to the border to block desperate migrants crossing Mexico in search of America.

It may be that none of the dramatic events of this month will be decisive in determining the outcome of the midterm elections next month. But don't try to tell any of the candidates that.

That's why everyone in politics either dreads or dreams of the "October surprise," the late-in-campaign event or issue that suddenly upends all calculations and delivers electoral victory.

The event or issue may be a natural disaster or of human origin, a scandal that erupts overnight or a stunning revelation that turns the tide.

Some such game changer, or efforts to invent one, have been a feature of nearly every presidential campaign for at least the last half century. The phenomenon affects some midterm election cycles as well. And that's not even to mention all the statewide and local races that have been radically altered in the month before Election Day.

Not infrequently, more than one surprise happens in the same October. Take the most immediate example of 2016, when not one but two or three major breaks in the campaign narrative occurred less than a month before Election Day.

Late in that October, the FBI found a laptop from the home of an aide to Democratic presidential nominee Hillary Clinton contained emails from Clinton, whose missing emails as secretary of state had been a lingering campaign issue. When the FBI Director James Comey learned of this, he shared the information with the relevant Republican committee chairman on Capitol Hill, who shared it with the rest of the world via Twitter on Oct. 28.

Although the FBI soon determined that these emails were copies of others seen earlier, the damaging headlines about a "reopened investigation" had already made a major dent in the voters' consciousness. Clinton herself has blamed her loss on this eleventh hour incident, among other factors.

Many had felt certain Clinton would win, in part because of an earlier October surprise affecting the man who was her opponent, Donald Trump. On Oct. 7, the Washington Post had revealed a videotape of Trump using offensive language to brag of his aggressively sexual treatment of women. The recording was made without his knowledge shortly before a taping of the TV show Access Hollywood.

On that same October day, the Internet site WikiLeaks released emails from within Clinton's campaign operation and audio recordings of Clinton herself talking to Wall Street investment bankers. For the bankers, she expressed views on trade quite different from her stump speech populism.

The specific phrase "October Surprise" has been in common usage since at least 1980. In that pivotal year, it was a surprise that did not happen that spawned decades of debate.

President Jimmy Carter was seeking re-election that fall while straining to negotiate the release of 52 Americans who had been held hostage since the previous fall in the U.S. Embassy in Tehran. Challenger Ronald Reagan's camp feared such a release might be timed to prompt a grateful nation to reward Carter with a second term. Did Reagan's camp act on these fears by negotiating its own deal with the Iranians? Allegations have long persisted that Reagan's team worked a deal with Israel to sell crucial military parts to Tehran as a reward waiting until after Reagan took office to release the hostages. Official investigations by committees in the House and Senate, under Democratic control, decided the evidence of such a plot was inconclusive.

But there have been other instances of theatrical plot twists in the late innings of American elections. To mention just a few over the past 50 years:

October 2012. We will never know what might have become of President Obama's bid for a second term if it had not been for "Super Storm Sandy." Although technically no longer a hurricane, Sandy slammed the Eastern seaboard just before the election. Obama swung into action, hooked up with governors from both parties in affected states and spent the final days of the campaign wreathed in their appreciation. Republican challenger Mitt Romney was videotaped unloading supplies for some storm victims.

October 2008. One candidate for an October surprise that seemed to flop was the revelation, four days before Election Day, that candidate Barack Obama had a half-aunt named Zeituni Onyango who was an undocumented immigrant living in Boston. She had been denied asylum and ordered out of the country four years earlier. The story was widely but not extensively reported, and had no discernible effect on the election.

October 2004. On the 29th of October, Al Jazeera aired a videotape of Osama bin Laden, the leader of Al Qaeda, taking responsibility for the terror attacks of Sept. 11 three years prior and castigating the U.S. for its support of Israel. In the final phase of the campaign between President George W. Bush and Democratic challenger Sen. John Kerry, the tape refocused news audiences on Sept. 11 and the War on Terror. It was credited by some for the late "Bush bounce" that resulted in a slim victory for the incumbent.

October 2000. The weekend before Election Day, Maine officials confirmed records showing presidential candidate George W. Bush had been arrested for drunk driving there in 1976. Bush held a news conference to confirm the incident, which happened when he was 30, and reiterating his decision to quit drinking when he was 40. But this late hit was thought by some of Bush's own staff to have decreased turnout among Evangelical voters and contributed to Bush's loss in the popular vote that year (he won the narrowest Electoral College victory in history.)

October 1972. There seemed to have been plenty of final nails in the coffin for the campaign of Democratic nominee George McGovern that year, not least being the news that his running mate had undergone shock therapy for depression. But 12 days before the November vote, incumbent Richard Nixon sent his national security advisor Henry Kissinger out to tell the news media "We believe that peace is at hand." Kissinger was the chief negotiator for the U.S. in talks aimed at ending the Vietnam War. Nixon won the popular vote by 20 percentage points. This may have been the occasion for the first usage of the phrase "October surprise," and it supplied the boost other candidates have dream of since.

October 1968. If there was ever an October surprise in the making that might have altered history, it was the effort in this autumn by President Lyndon Johnson to achieve a breakthrough in the Paris peace talks over the war in Vietnam. Like Nixon four years later, Johnson believed some kind of agreement might well be achievable in the weeks before Election Day – a breakthrough that would secure the election for his vice president and chosen successor, Hubert Humphrey. Substantial evidence suggests that Nixon, who was the 1968 Republican nominee against Johnson, also considered this is a real possibility.

But Nixon did not just stand by to see what would happen. Biographer John Farrell, who spent years in the archives of the Nixon campaign and presidency, established in his 2017 volume that the Nixon team tried to retard those peace talks via side negotiations with the South Vietnamese government, who were told Nixon would get them a better deal. The contact was made through the back channel of Anna Chennault, the Chinese-born wife of legendary U.S. Army Gen. Claire Chennault, leader of the "Flying Tigers" squadron in World War II.

The exact effect of these back-channel efforts remains a matter of debate, but in any event the South Vietnamese did not agree to a deal. Johnson announced a bombing halt but no real breakthrough. Nixon won a narrow but decisive victory in November.

October in January. Whatever significance there may be in the October surprise tradition, it clearly resides not in the 10th month of the calendar but in its proximity to Election Day.

Holding federal elections in November is a feature of the Constitution itself, but important state and local and primary elections are held at various times of the year. One of the best examples of an "October surprise" came in January 1979 in the form of a historic snowstorm that shut down the city of Chicago and brought down its Mayor Michael Bilandic.

Having succeeded the totemic Mayor Richard J. Daley two years earlier, Bilandic was cruising to a full term in his own right when the city largely disappeared under 35 inches of the white stuff. It took days, even weeks, for city plows to get to the neighborhoods. Bilandic's longshot opponent, a city official he had once fired named Jane Byrne, pinned the blame for the snow fiasco on City Hall and upset the incumbent at the polls.