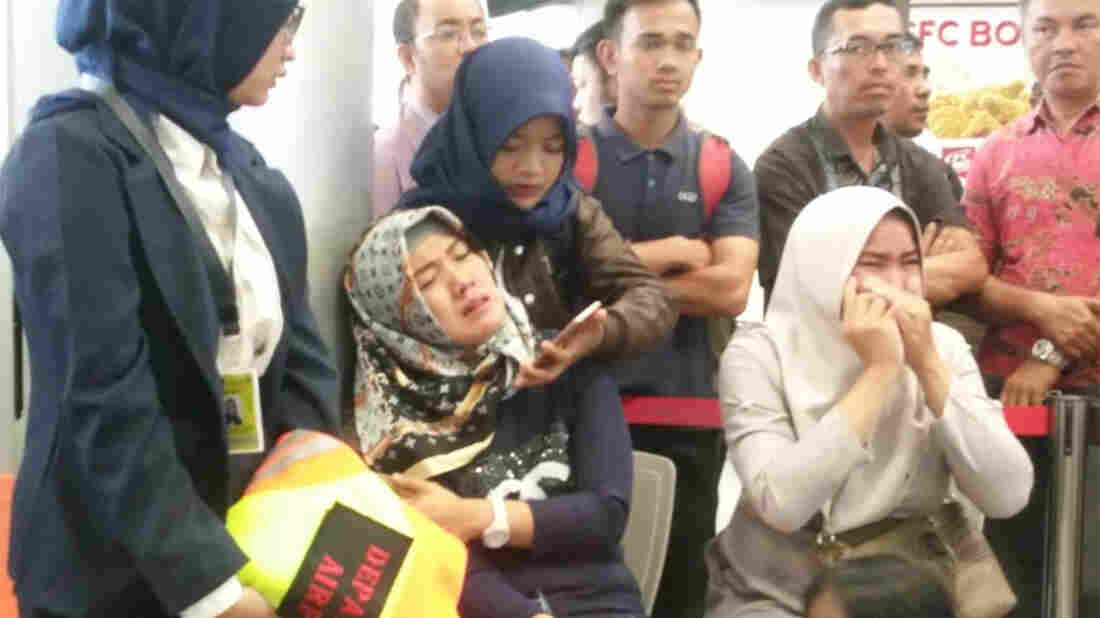 Relatives of passengers of Lion Air flight JT610 that crashed into the sea cry at the airport on Monday in Pangkal Pinang, Indonesia, where the plane was bound. Antara Foto Agency/Reuters hide caption 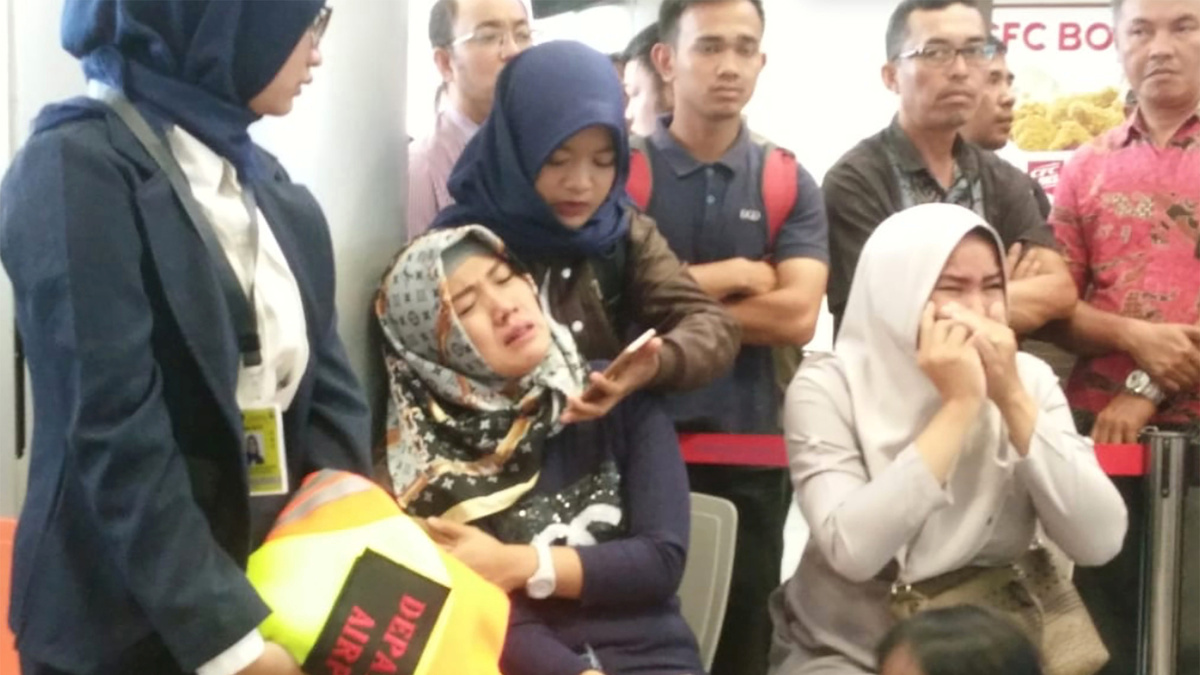 Relatives of passengers of Lion Air flight JT610 that crashed into the sea cry at the airport on Monday in Pangkal Pinang, Indonesia, where the plane was bound.

An Indonesian airliner carrying 189 passengers and crew has crashed into the Java Sea minutes after takeoff from Jakarta. The Indonesian Ministry of Transportation confirms it has found the wreckage of the Lion Air jet — a Boeing 737 Max 8 that was delivered to the company in August.

Flight JT610 departed from the Indonesian capital at 6:20 a.m. local time, bound for Pangkal Pinang, on an island east of Sumatra. But shortly after takeoff, the flight crew asked for and was granted permission to return to the airport, according to the Associated Press. Less than 15 minutes into the flight, it suddenly lost altitude and disappeared from radar.

The flight was carrying one child, two infants and 178 adults, which includes three crew members under training and one technician, Lion Air says. The plane also had two pilots and six other aircraft crew.

Indonesian television showed video of a fuel slick and debris field in the Java Sea, close to the coast northeast of Jakarta.

The National Search And Rescue Agency says that when the plane went down, its emergency locator transmitter beacon did not emit a distress signal — despite the beacon being certified through August of 2019.

WATCH: Debris from #LionAir flight #JT610 floating in the sea off Java, after it crashed shortly after take off from Jakarta (📹: BNPB Indonesia) https://t.co/4jVWZli7ag pic.twitter.com/A8v34SYC85

"We don't know yet whether there are any survivors," the head of Indonesia's search and rescue agency, Muhammad Syaugi, told a news conference, according to Reuters.

"We hope, we pray, but we cannot confirm," he said, adding that no distress signal had been heard from the plane's emergency transmitter. The agency also said that a tugboat leaving the capital's port witnessed the plane crash into the water.

Lion Air, a low-cost carrier, has a spotty safety record with a number of incidents over the years, including a crash landing at sea in April 2013 that remarkably resulted in no deaths or serious injuries. Due to the problems, the U.S. and the European Union had banned it from operating in their airspace, but both lifted that restriction in 2016.

The website Flightradar24 reports that flight data from Flight JT610 showed an increase in speed and decrease in altitude from its last transmission. According to the site, one of the plane's last recorded data bursts showed it had fallen to an altitude of 3,650 feet and was at 397 mph. Its last contact showed it at 425 feet and a speed of 30,000 feet/min — around 341 mph.

Reuters reports that at least 23 government officials were aboard the plane. NPR's Julie McCarthy has confirmed that 20 of those officials were from the Finance Ministry who were returning to the island of Bangka, a tin-mining region.

Reuters reports that the pilot and co-pilot had amassed a combined 11,000 hours flying time before the crash.

Indonesian officials quoted by Channel News Asia said Lion Air had taken delivery of the brand-new Boeing 737-800 Max, described as "an updated, more fuel-efficient version of the manufacturer's workhorse singe-aisle jet" on Aug. 13. The airline says it put the jet into service two days later, after it was "declared operationally feasible."

"We don't dare to say what the facts are, or are not, yet," Edward Sirait, the chief executive of Lion Air Group, told Reuters. "We are also confused about the why, since it was a new plane."

The crash in Indonesia is the first reported to involve the new 737 model. Boeing says it "is deeply saddened" by the incident and that it is "ready to provide technical assistance to the accident investigation."