Accessibility links
Migrant And Refugee Advocates Call On Trump To Tone Down Anti-Immigrant Rhetoric In the aftermath of the Pittsburgh killings, many are seeing a connection between President Trump's anti-immigrant speeches and the attack, which targeted a synagogue that helped refugees.

Listen · 3:36 3:36
Migrant And Refugee Advocates Call On Trump To Tone Down Anti-Immigrant Rhetoric 3:36 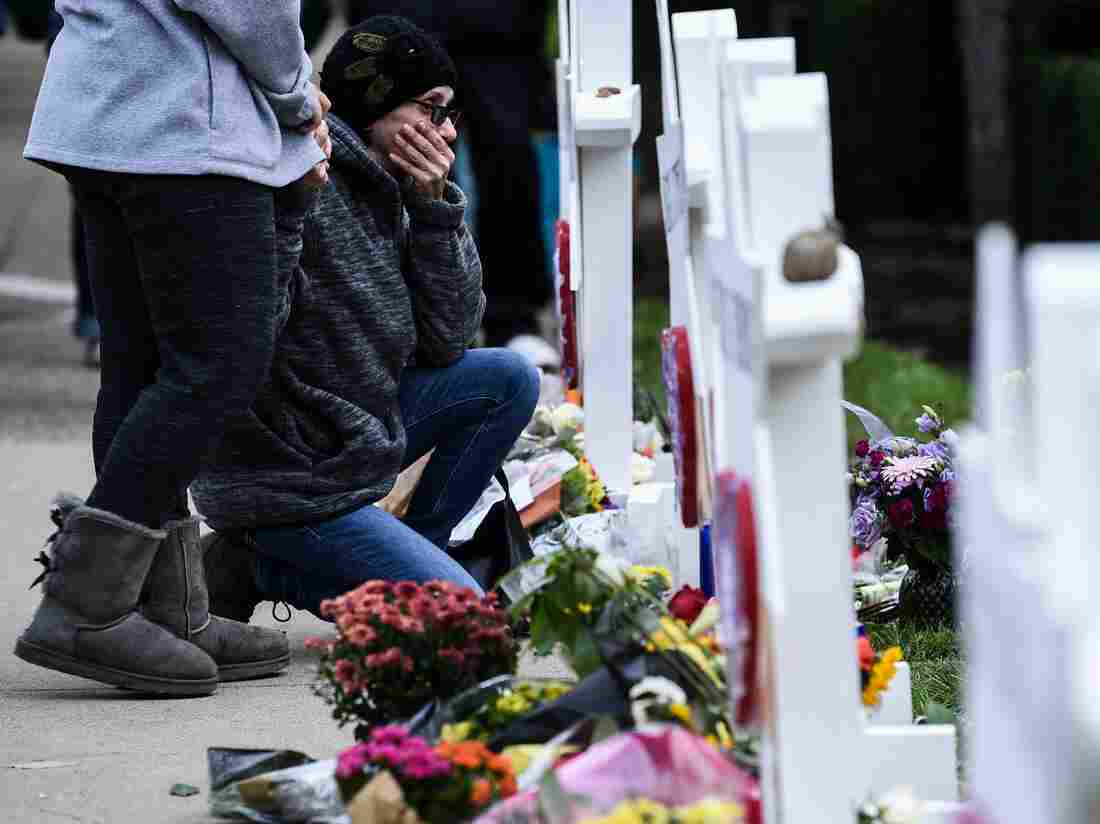 People pay their respects at a memorial outside the Tree of Life synagogue in Pittsburgh after a shooting there left 11 people dead. Many people see a connection between President Trump's anti-immigrant rhetoric and hate crimes. Brendan Smialowski/AFP/Getty Images hide caption 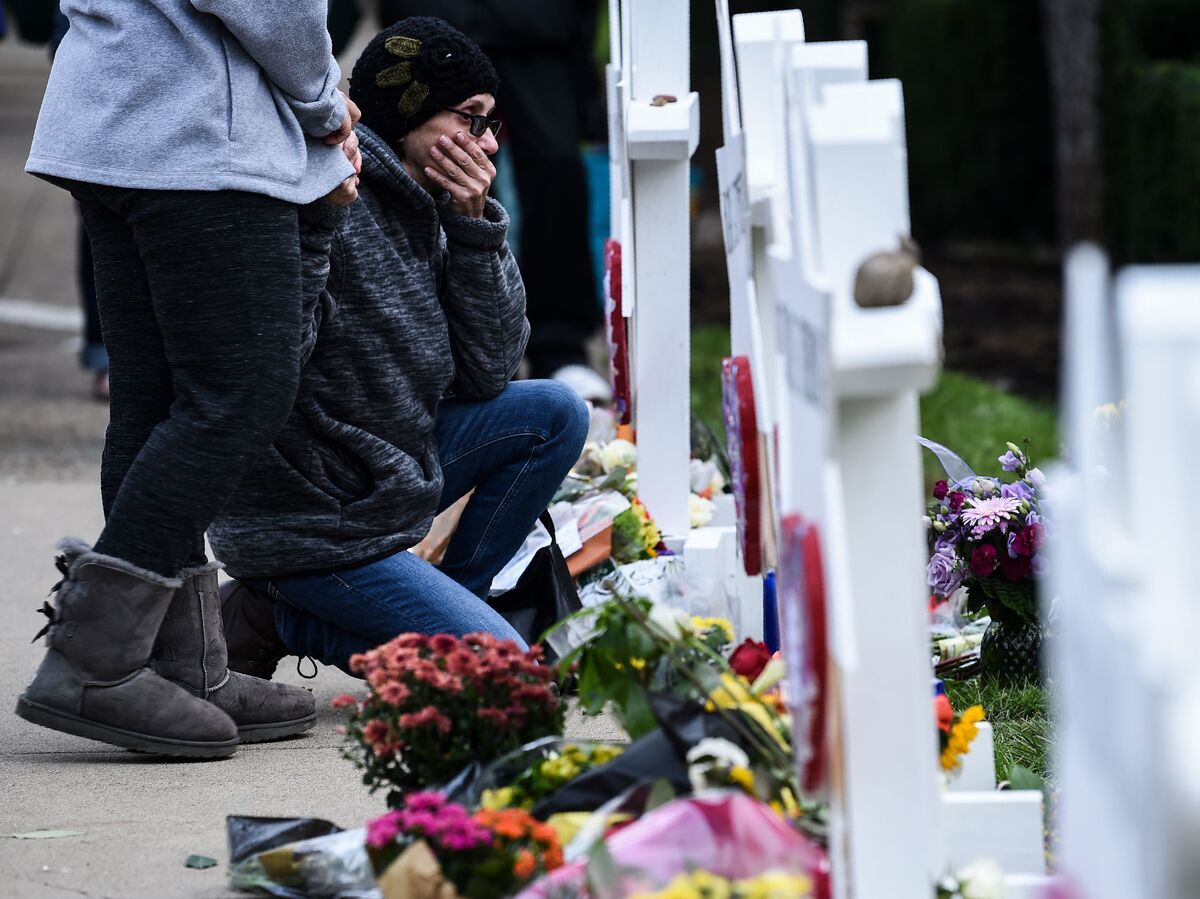 People pay their respects at a memorial outside the Tree of Life synagogue in Pittsburgh after a shooting there left 11 people dead. Many people see a connection between President Trump's anti-immigrant rhetoric and hate crimes.

Hours after the synagogue shooting in Pittsburgh, President Trump denounced the attack.

"The scourge of anti-Semitism cannot be ignored, cannot be tolerated," Trump said on Saturday at a campaign rally in Illinois.

But some are still troubled by what the president has not said about the synagogue killings. Authorities say the alleged shooter was motivated by hatred of Jews. On social media, the shooter also raged against immigrants.

"This wasn't just an anti-Semitic act. But it was also an act against refugees and against immigrants," said Mark Hetfield, the CEO of HIAS. The Jewish organization was founded in the 1880s as the Hebrew Immigrant Aid Society and now helps resettle refugees from all over the world in the U.S.

The Tree of Life synagogue in Pittsburgh was one of many across the country that had participated in a "National Refugee Shabbat" this month that was organized by HIAS.

Just before the attack there, the alleged shooter, Robert Bowers, posted on social media accusing HIAS of bringing violent "invaders" into the country.

"The reason he had targeted the Jewish community on this particular day is because he saw Jews as helping refugees come into the country," Hetfield said. "And President Trump didn't mention that."

To Hetfield and other critics of the president, there's a connection between the Pittsburgh shooting and the administration's rhetoric about immigrants.

"Hateful words always lead to hateful acts. And that's exactly what happened here," Hetfield said. "Words matter. And they especially matter when they come from the president of the United States."

In the aftermath of the Pittsburgh shooting, advocates for migrants and refugees are calling on Trump to tone down his anti-immigrant rhetoric. But with just over a week to go before the midterm elections, there's no reason to think that the president will heed those calls.

By the end of his speech at the Illinois rally, Trump was back to familiar talking points about "criminal immigrants," vowing to stop the migrants slowly making their way across Mexico to the Southwest border.

"They have to come in legally. Like all of the millions of people that are waiting on line right now. They've can't break into our borders. They're not going to," Trump said.

Monday, the Department of Defense announced that the president is sending thousands of troops to the Southwest border. And the White House is mulling over an executive order that would close the border to migrants.

The president's supporters dismiss any connection between his rhetoric on immigration and the motivations of the Pittsburgh attacker.

"Trying to understand this kind of behavior is impossible," said Dan Stein, the president of the Federation for American Immigration Reform, which favors lower levels of immigration.

"It seems very cynical for people to try to take the activity of a deranged person, and turn around and try to alter and shape our national political debate on frankly one of the most important issues of our time," said Stein.

But immigrant-rights advocates say that debate has been swamped by disinformation and fearmongering. The alleged synagogue shooter, for example, shared conspiracy theories on social media about Jews supporting the migrant caravan.

"There seems to be real fear out there of the 'other,' " said Hetfield. "And rather than addressing this fear and confronting it, these leaders that we have are stoking those fears."

Trump himself warned, without evidence, that there are "unknown Middle Easterners" mixed in with the caravan. Reporters for NPR and other media on the ground say the only migrants they have seen are those fleeing from violence in Central America, many of whom do want to come to the U.S. legally — by seeking asylum.