Accessibility links
Muslims Are Having A Hollywood Moment More and more sitcoms and dramas on TV and online feature Muslim characters and storylines. That is due, in part, to a new crop of Muslim writers, comedians and actors creating the shows themselves. 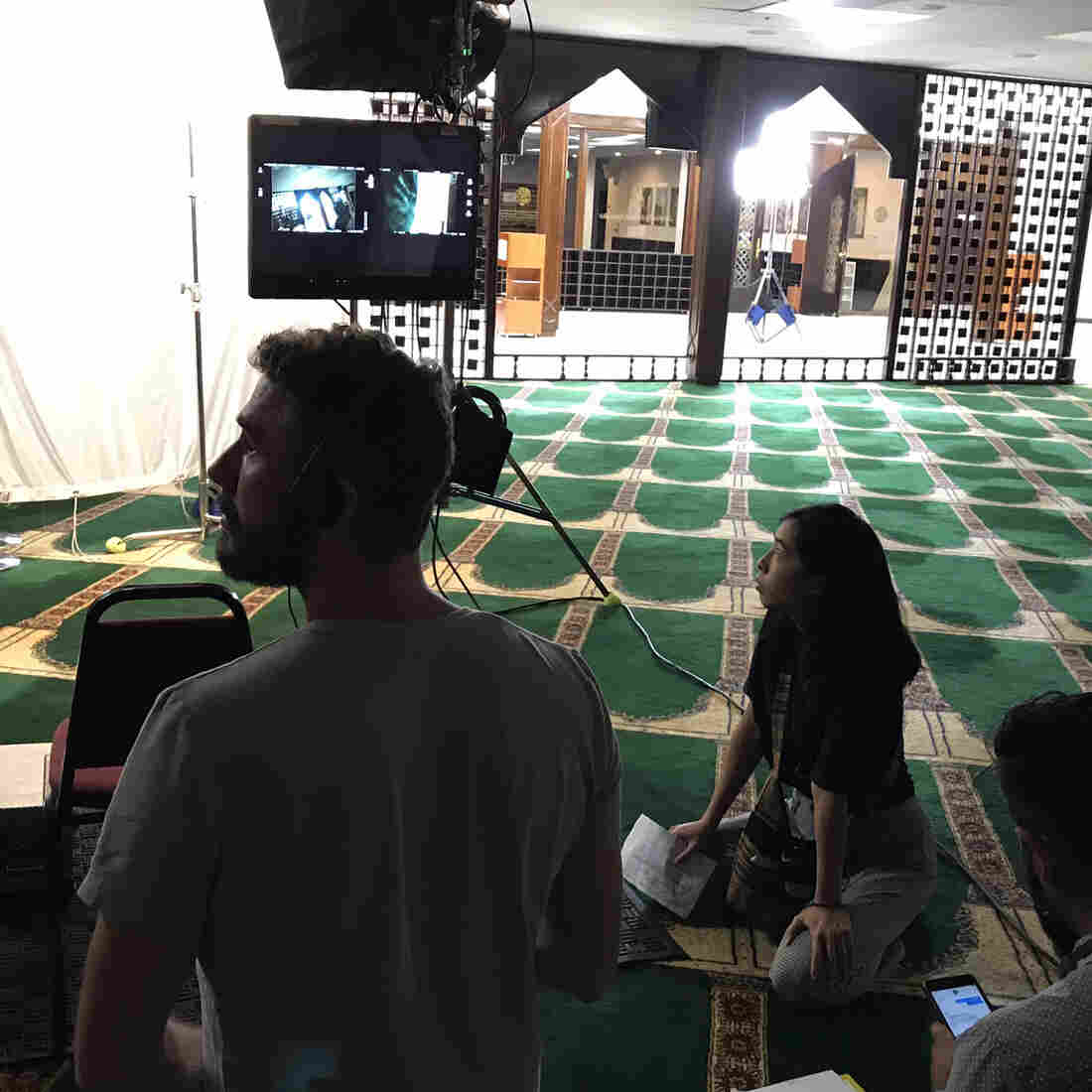 On the set of East of La Brea at the Islamic Center of Southern California. The Web series, which focuses on two Muslim-American women, is one of a new crop of shows featuring Muslim characters. Leila Fadel/NPR hide caption 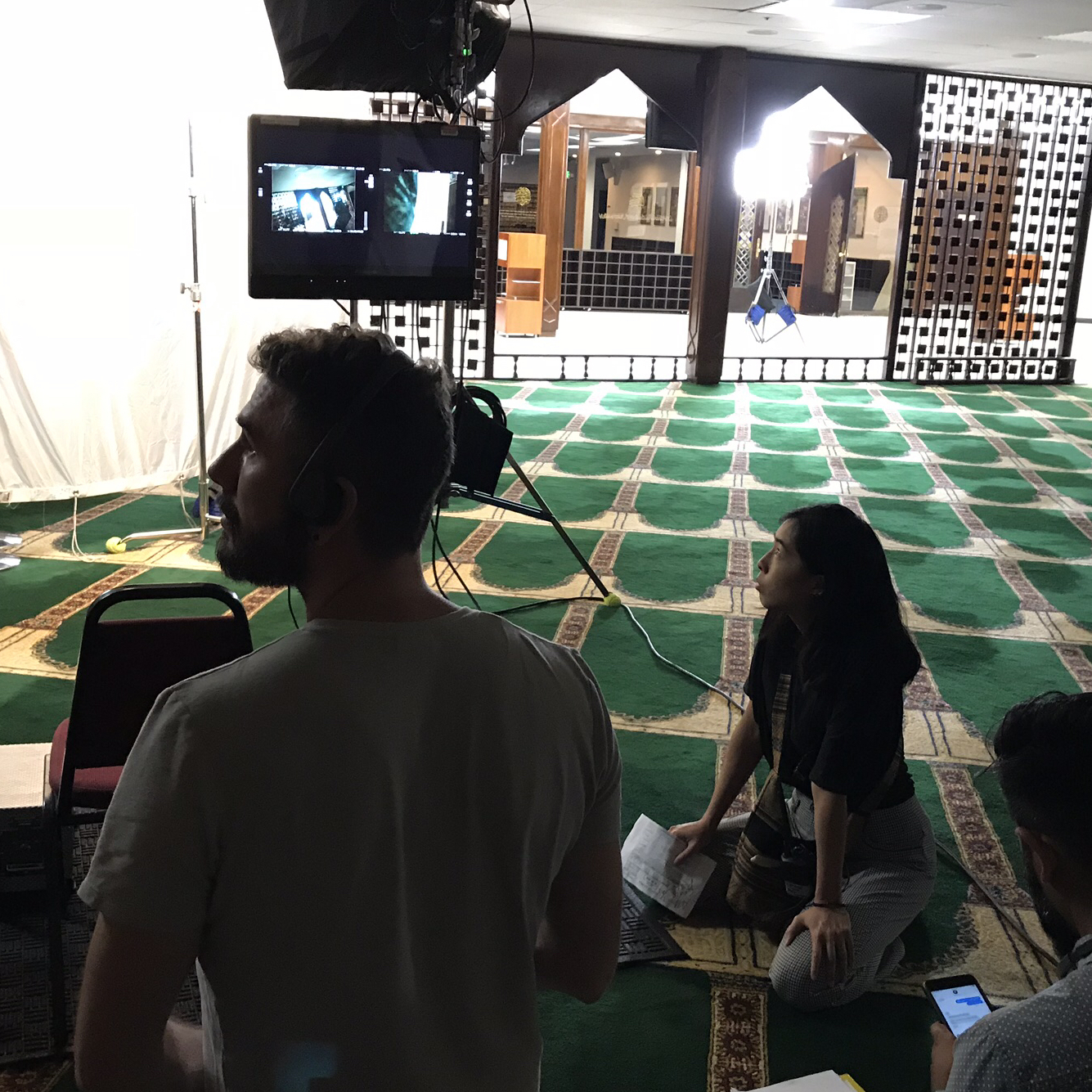 On the set of East of La Brea at the Islamic Center of Southern California. The Web series, which focuses on two Muslim-American women, is one of a new crop of shows featuring Muslim characters.

On the last day of taping for a new 10-part Web series called East of La Brea, the cameras are set up at a local mosque for a scene about a 20-something black Muslim woman who's praying. Suddenly her phone rings and the quiet space fills with raucous and racy lyrics from a pop song. Around her, older women shoot her shady stares.

This show is one example of what appears to be a shift in Hollywood. On TV and on online streaming services, Hollywood watchers say more Muslim characters than ever before are showing up in sitcoms and dramas. The characters they portray are more nuanced and more complicated than usual. In part, that's because many Muslims themselves are writing these shows and characters.

East of La Brea is a show about being in your 20s and figuring out life against the gentrifying backdrop of Los Angeles, told through two main characters, roommates who are Muslim. But that's not the entirety of the women's storylines, says Sameer Gardezi, a Pakistani-American screenwriter and the creator of the show.

"I really feel like when people watch this it's going to feel like [it is] an LA story," Gardezi says. "Being Muslim is part of them, we don't ignore that, but at the same time their problems aren't necessarily faith based; they are based on other aspects that I feel are more relevant to what it means to lead an American life." 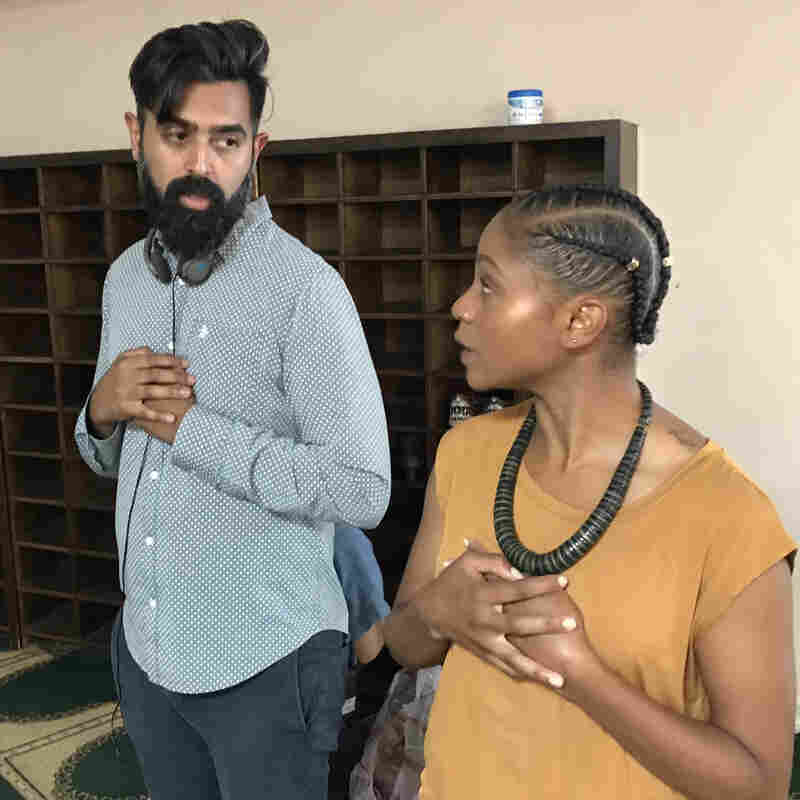 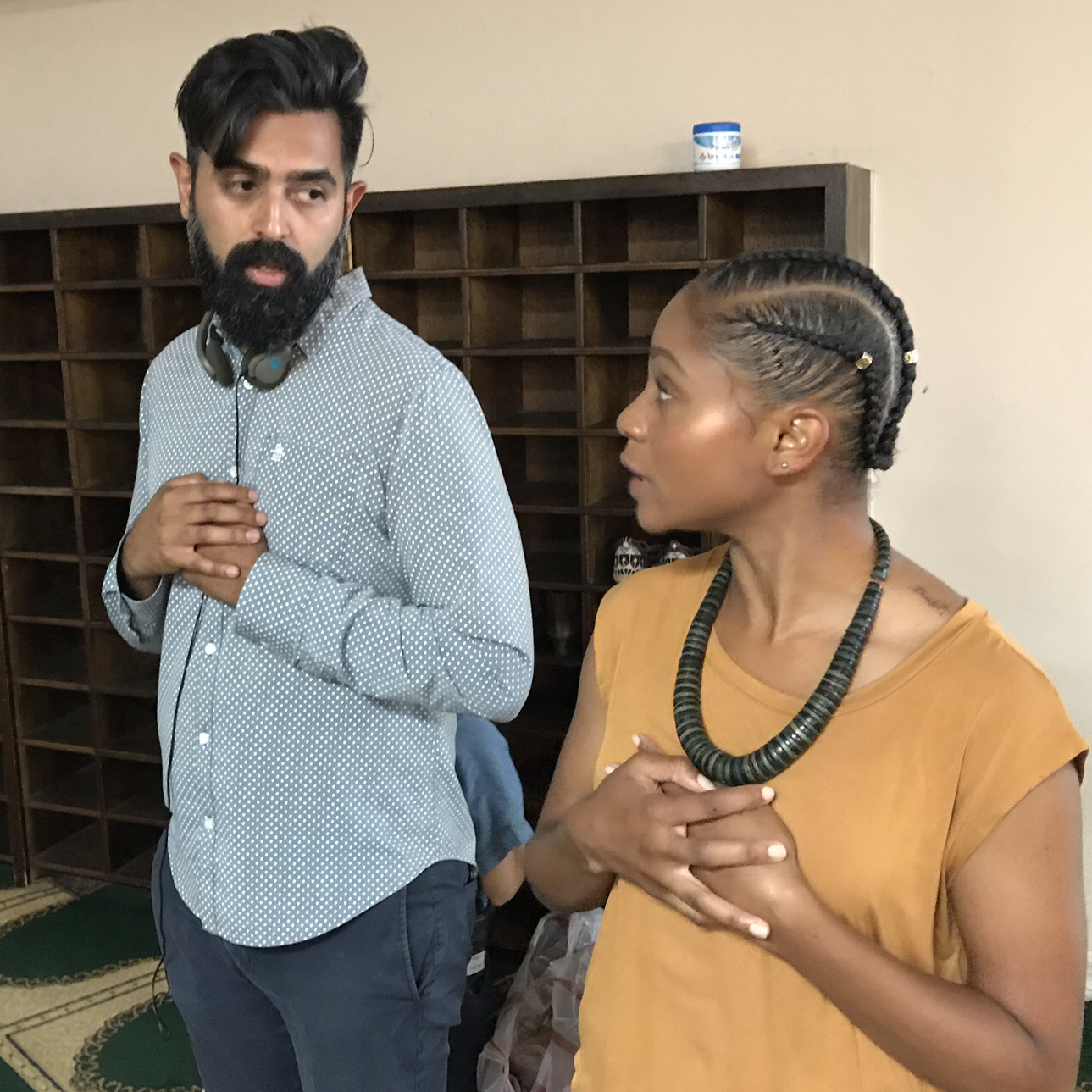 Things like paying rent, feeling lost in a dead-end job and dealing with addiction in a family.

The Web series is the first project from Powderkeg, the digital media company founded by director, writer and actor Paul Feig, known for directing films like Bridesmaids and creating the show Freaks and Geeks. The company was founded to uplift underrepresented voices.

East of La Brea follows the friendship of two Muslim women of color, one black and one Bangladeshi-American. It was created with a grant from Pop Culture Collaborative, an organization whose goal is to boost authentic stories about minority communities, and in collaboration with the Muslim Anti-Racism Collaborative. The production is being partially funded by Lyft Entertainment and the Chicago-based Pillars Fund, a fund to bolster American Muslim voices.

It's one of several projects by and about Muslims that are in the pipeline or have recently debuted in the entertainment industry. But Gardezi says this story is just one American Muslim story.

"There are so many different versions and my hope would be that everyone gets a shot at telling their version," he said. "So it doesn't feel like oh, this is the one Muslim show that needs to make it."

Communities of color and minorities in Hollywood feel that that is often the way it happens: They get one shot to show that their characters are marketable, one shot to reflect the entirety of incredibly diverse and complicated communities. Gardezi says it's impossible to do that with one show.

But Muslims are embracing the moment. Right now, there's an appetite for content including or about their communities in part it is because Muslim writers like Gardezi, who has written for Modern Family and Outsourced, are creating their own content. But a lot of the interest is because the entertainment industry itself is reacting to anti-Muslim and anti-immigrant sentiment from Donald Trump.

When Trump announced his candidacy in 2015, followed months later by a call for a "complete and total shutdown" of Muslims entering the country, the Hollywood bureau at the Muslim Public Affairs Council, MPAC, got a lot more popular.

We're up against decades of storytelling that is inaccurate many times, that is racist often and very stereotypical.

"The phones were ringing off the hook," said Sue Obeidi, the Hollywood Bureau director.

She consults with studios, production companies and writers to help them create more authentic Muslim characters.

"We're up against decades of storytelling that is inaccurate many times, that is racist often and very stereotypical," she said.

Among the tropes, she said, are portrayals of women as chattel, who don't have identities, or Muslims portrayed only as gas station owners, taxi drivers or violent villains.

Obeidi says it's an uphill battle, but things are changing. She starts to list the number of characters on mainstream shows on a white board.

"A Muslim surgeon on Grey's Anatomy; a superhero on DC's Legends of Tomorrow; an LGBTQ hijabi Muslim (she said Hijabi which is an adjective, Hijab is the article of clothing, Hijabi is used to describe someone who wears the Hijab) on The Bold Type; a pork-loving, alcohol- drinking Muslim on Master of None."

When writers come to her for advice, Obeidi reminds them that these Muslim characters might be the only Muslims some people ever meet. She tries to help them get the language right, for example in scripts that use the term Allahu akbar, which means God is great in Arabic, the language of the Qu'ran.

"You've seen many TV and film projects that have Allahu akbar being used in very violent scenes," she said.

She negotiates to try to get writers to take it out or offset it with happy scenes like using the term Allahu akbar at a wedding or a dinner party. Because for Muslims it's a beautiful phrase portrayed as ugly. And the impact can have profound ramifications in real life.

"So someone hears Allahu akbar when they're dining out and all of a sudden you know they're calling 911 because they think a family is doing something bad," she said. "When all they're saying is God is great."

A lack of diversity in Hollywood and other places means the clichés and the distortions can prevail. Despite progress, Hollywood still struggles with reflecting a more and more diverse America. The Hollywood Diversity Report, released by UCLA in 2018, shows people of color still lag in all key jobs in the industry, from leading roles to creators of content.

That's why this moment feels like a turning point for Muslims, Obeidi and others say.

Not every project is incredible material. Many positive Muslim characters fall into two camps that a lot of Muslims find frustrating: one, the Muslim hero fighting terror; the other, the confused Muslim who abandons his culture for a secular life. Both are storylines unrecognizable to a lot of Muslims.

That's why the content in the pipeline today, being written by and about Muslims for large audiences, is so anticipated. There's Hassan Minhaj's weekly comedy show on Netflix that begins this month; an autobiographical sitcom for ABC being developed by Maysoon Zayid, a Palestinian-American comic with cerebral palsy; and a new sitcom called Ramy on Hulu, developed by Ramy Youssef, who is following in the path of iconic comics who came before him turning standup into a sitcom like Seinfeld.

On a recent night at the Hollywood Improv, Youssef is headlining, joking about all the things that make him who he is: a millennial, a practicing Muslim trying to be good, an American, the son of Egyptian immigrants. 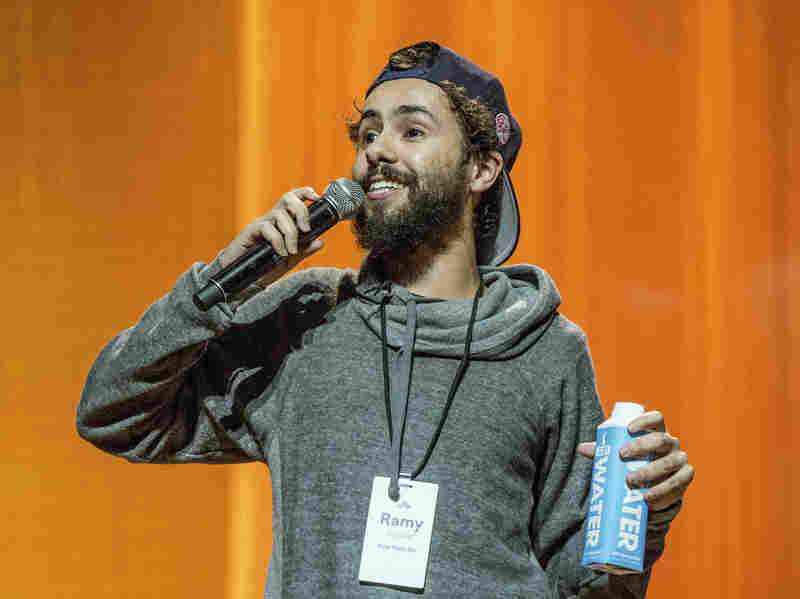 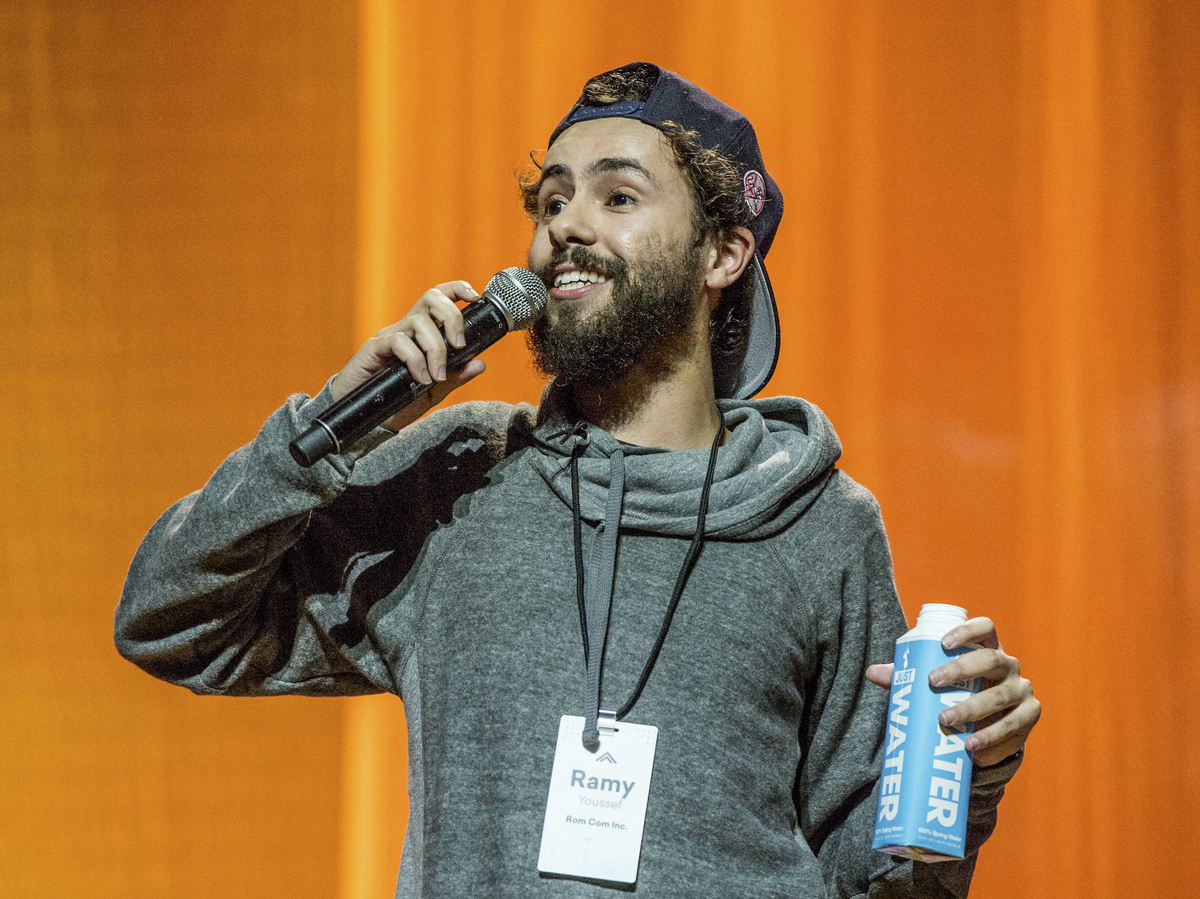 He also jokes about how, in LA, suddenly people think Islam is cool. "I was at a juice shop. I was talking to this woman telling her about Ramadan, she works there. She was like, 'oh My God that's sounds so amazing. I'm gonna do it this weekend.' She said it like it was Coachella."

After his standup performance he talks about how he and his friends joke about approaching religion like a menu. Ramy doesn't drink, doesn't do drugs but he does have premarital sex. That's his arbitrary line, he says.

"We call it Allah cart. We're kind of just picking and choosing like 'Well, this is my deal with God,' " he said.

He hopes Ramy demonstrates how all kinds of people have their deal with God.

"In my standup I like to get dark, I like to get weird, I like to get uncomfortable," he said. "I feel like when an immigrant family or when a family that is maybe a group that's not well represented, when people try and put them on television, they go out of their way to make them look amazing and look perfect."

His show won't do that.

Sameer Gardezi, the East of La Brea writer, says he doesn't think that any one show can be the breakout moment for Muslims, when the communities are so diverse, nuanced and different from person to person, from place to place.

"That is the flexibility and the privilege that I think white communities have is that they're allowed to fail in Hollywood and no one really bats an eye," he said. A new project will still be funded.

"So that's the point that we have to get to," Gardezi said.