Accessibility links
'The Proposal' Knocks It Out Of The Park Jasmine Guillory's new romance kicks off with her heroine rejecting an over-the-top public proposal at a ball game — luckily, there's a hot, sensitive doctor on hand to help her with the backlash. 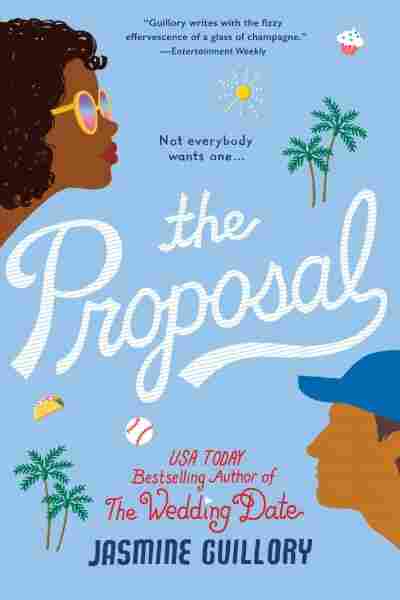 Jasmine Guillory's debut novel, The Wedding Date, was a best-seller when it arrived back in January — and if you're worried that she might succumb to sophomore slump, fear not. The Proposal knocks it out of the ballpark, pun intended in this case. Opening with a marriage proposal on a JumboTron at a Dodgers game, the story takes an unusual turn when Nikole Paterson's "no" goes viral, leaving her to fend off ire coming from every direction — especially from her narcissistic soon-to-be-ex boyfriend Fisher. Not only does she get a lot of flak as a black woman for rejecting a white man, Fisher himself later admits to using their relationship for professional gain.

But Dr. Carlos Ibarra — a secondary character in The Wedding Date — and his sister Angela happen by just in time to save Nik from further humiliation. So when Nik decides she's ready for a rebound, the hot and sensitive Latino doctor seems like a natural choice.

Guillory nails our national fatigue over cliché marriage proposals in a hilarious opening that'll have readers cringing along with Nik. And she doesn't make readers wait long for Nik and Carlos to get intimate — but the real sexiness here stems from an easy repartee that never misses a beat, no matter what's going on. These two may love indulging themselves with rosé and cupcakes galore, but their romance is anything but cloying.

Nik and Carlos are clear about their expectations: This will just be a fling. Still reeling from that proposal, Nik wants to balance her need for independence with the expectations that society — especially men — places on women. Carlos also has plenty on his plate between dealing with the stresses of a new job and the loss of his father. (And if anyone could have a healthy and mature casual fling, it'd be Nik and Carlos.) While that no-strings status keeps them from being becoming too codependent, it also allows them to communicate freely because they think the stakes are so low — which, ironically, only strengthens their relationship.

Nik pushes Carlos to deal with his pain and fear about his family, and he cheers on the passion for journalism that no one else in her life seems to care about. And the more enmeshed they become in each other's lives, the harder it is to keep believing that this is just a no-strings-attached fling.

As entertaining as Nik and Carlos are together, Guillory has also given them real lives outside the contours of their relationship. She seamlessly alternates between Nik's close-knit friendships and Carlos' attentiveness to his family (whether or not they need that attention). She also explores the impact of Carlos' father's death, and the way it changes his personality and his decisions.

'The Proposal' packs all the feel-good punch of a rom-com, with a weighty kick of gravitas around dating issues, loss, and male privilege.

There is so much happening on the periphery in The Proposal, and it's all necessary — Guillory builds depth into Nik and Carlos and breadth into their relationship, because they need to know their own strengths (and we readers need to see it) before they can truly rely on each other. For example, Nik has a hard time asking Carlos for help with anything — she doesn't want to appear weak — but Guillory astutely steers us through the conflict by showing us her romantic battle scars and insecurities.

And she isn't afraid to take on big, serious topics. Even though Nik's ex is a minor character, he sets off a chain of events that change the course of the novel — and rather than repress the memory of their short-lived romance, Nik decides to tackle toxic masculinity by signing up for a self-defense program called Punch Like A Girl. She learns to punch quite well — but more importantly, she learns to reclaim that phrase and give it a positive meaning.

Rollicking, charming, and infinitely zesty, The Proposal packs all the feel-good punch of a rom-com, with a weighty kick of gravitas around dating issues, loss, and male privilege. It's vibrantly diverse, from the characters to the food they love and the world they live in. Ultimately, The Proposal magnifies Guillory's delightful voice, showcases her sharp, invigorating wit, and keeps her considerable momentum going strong.