Accessibility links
Pittsburgh Shooting: Funeral Held For Brothers Cecil And David Rosenthal The Rosenthal brothers' wooden coffins sat at the front of the temple as their family remembered the social, thoughtful men who were deeply involved in their congregation. 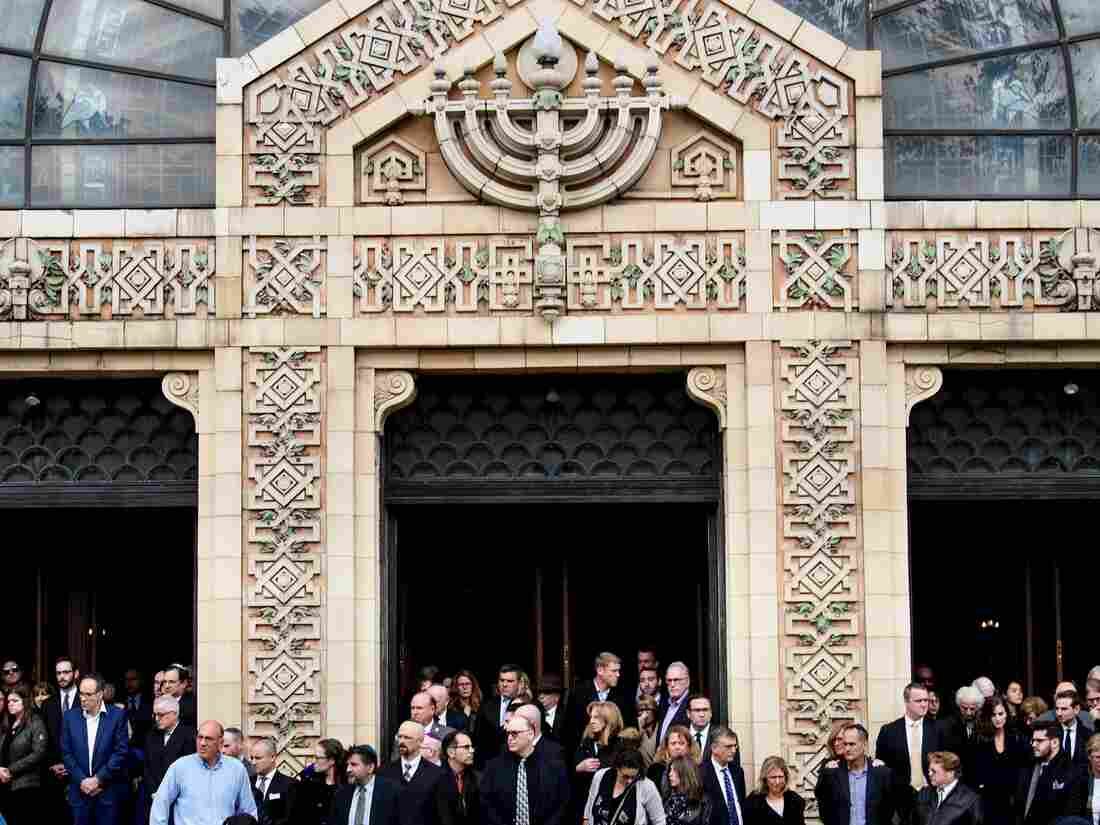 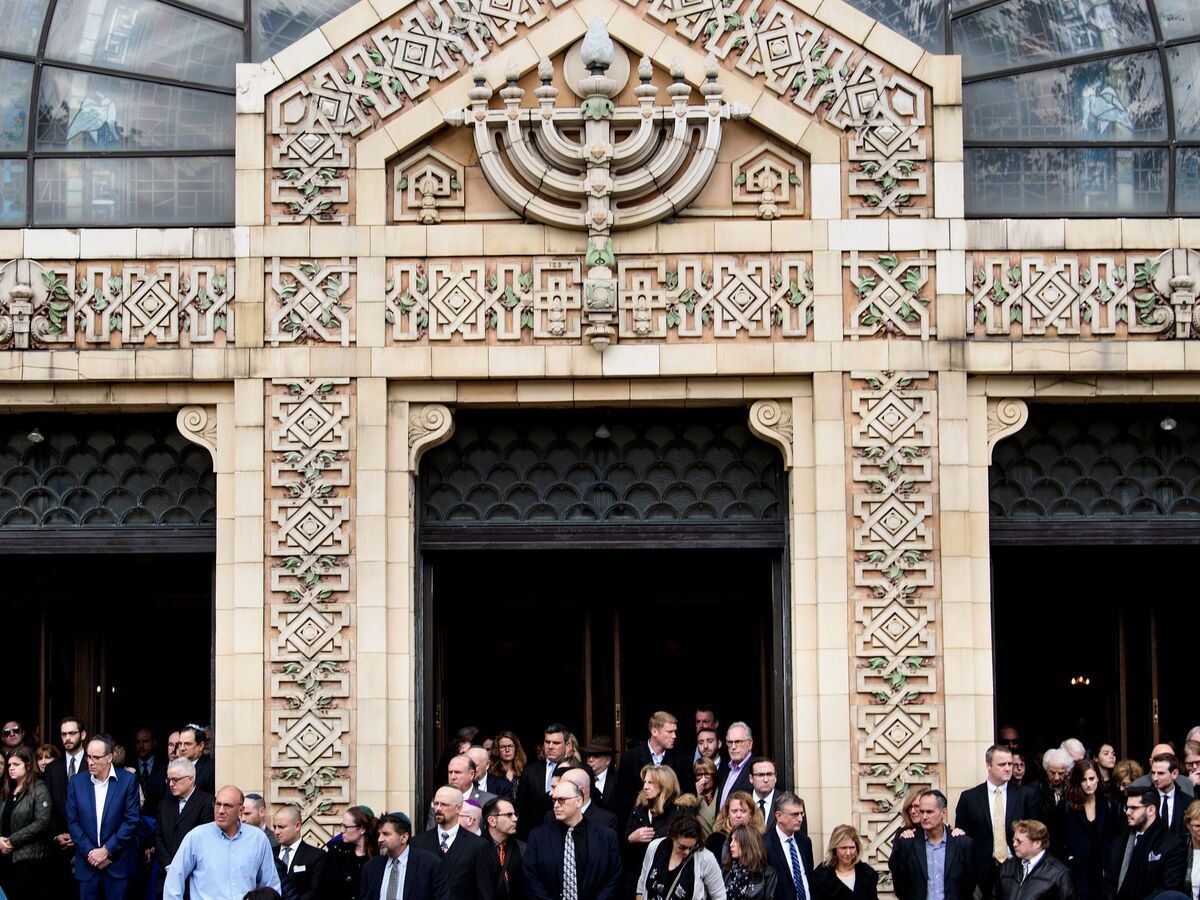 A large crowd of Jewish and non-Jewish mourners gathered Tuesday under a vaulted white ceiling, tall chandeliers and stained glass windows inside Pittsburgh's Rodef Shalom to honor Cecil and David Rosenthal. At 59 and 54, the brothers were two of the youngest victims and are among the first of the 11 victims of the shooting at Tree of Life synagogue to be laid to rest.

The brothers' wooden coffins sat head-to-head at the front of the temple as family remembered them as social, thoughtful men who were deeply involved in their congregation.

Cecil's brother-in-law Michael Hirt said he could have been the mayor of Squirrel Hill if he didn't have an intellectual disability. He knew everyone and everything in town, including the gossip — deaths, marriages, divorces. Cecil's sister Diane said he loved a party and would have loved being on TV.

David was remembered as a hard worker who was fanatical about cleaning. His family said he loved wearing police-style sunglasses and carrying around a police scanner.

Michael said the brothers, affectionately known in the community as "the boys" never bore ill will toward anyone and will be missed.

For many in Pittsburgh's Jewish community, Tuesday's funeral services start the formal period of mourning the victims — a process carefully guided by Jewish tradition. A separate service was held Tuesday for Dr. Jerry Rabinowitz, 66, a physician who also was killed on Saturday. Services for the rest of the victims will be held in coming days.

Attendees spoke about Cecil and David with similar affection. One man, describing their place in the community, referred to the pair fondly as "the boys." People say they were fixtures; inextricable from Squirrel Hill's — and Pittsburgh's — Jewish circles.

Among the faces at Rodef Shalom were Dan Frankel, the Democratic state Representative who lives in and represents Squirrel Hill. He's Jewish, and has been to a lot of weddings and bar mitzvahs at Tree of Life over the years.

People were somber, dressed in dark clothes, but it's also easy to see that this is a close, friendly community that has been suddenly thrown into a strange tragedy. 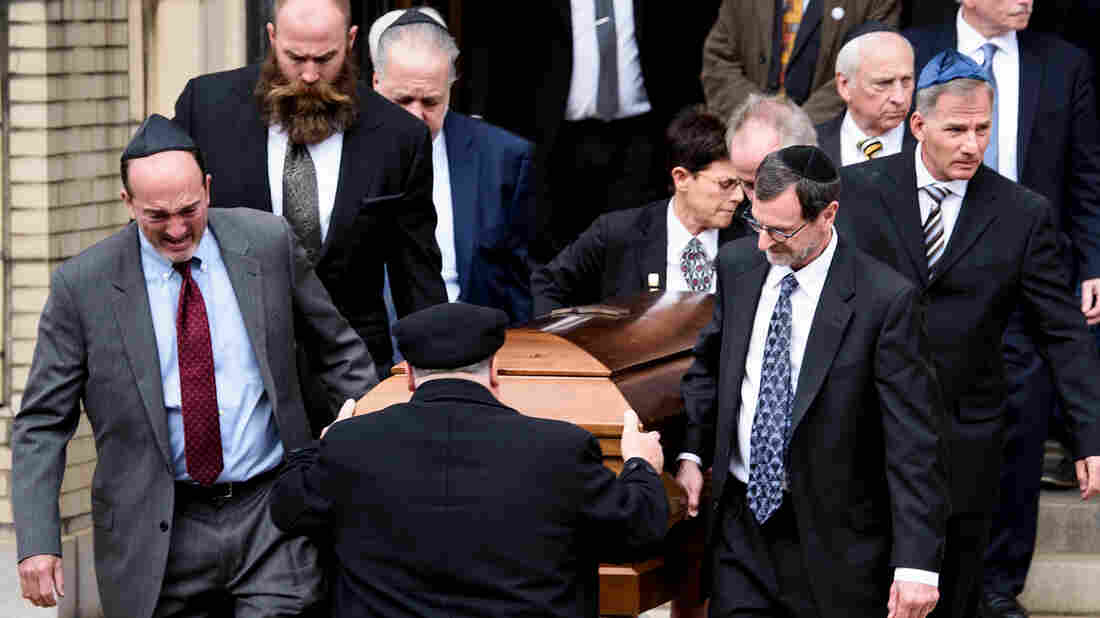 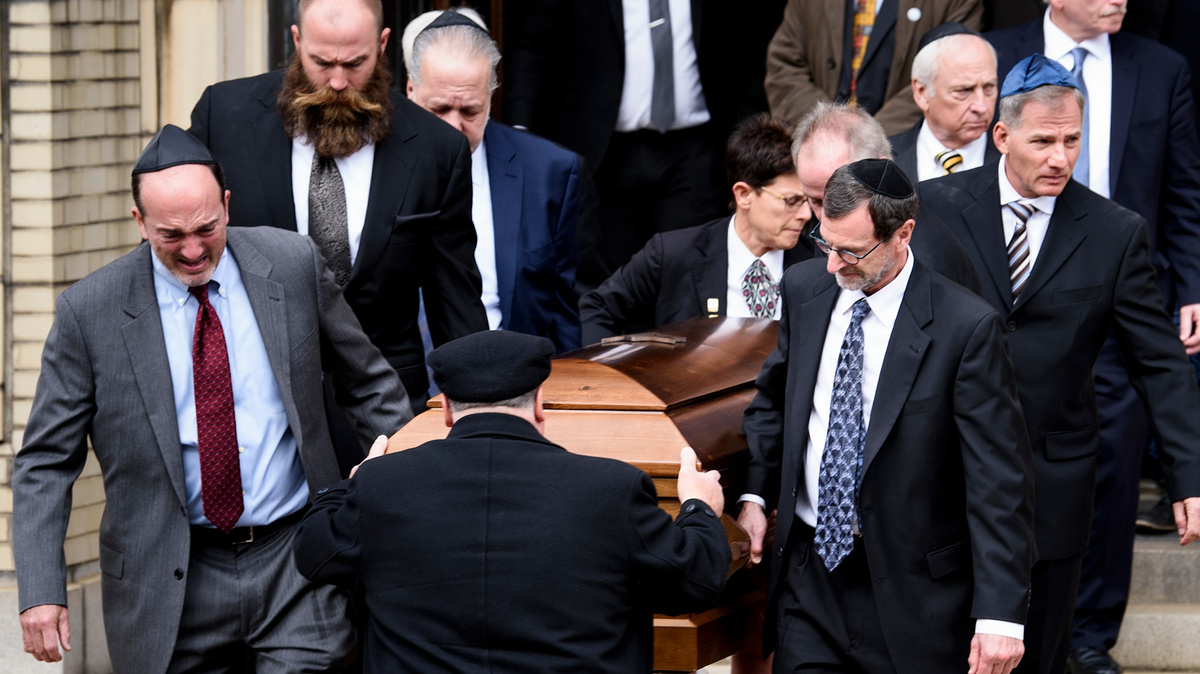 "I didn't know anybody that didn't know them. And they had a smile and a hug or a wave for everybody," said Sharon Ryave Brody, owner of the Ralph Schugar Chapel, a funeral home that serves mostly Jewish families in Pittsburgh.

Ryave Brody deals with death every day, but this isn't normal.

"We don't deal with a tragedy like this every day, thank God, but it's our duty, and it's an honor to be called by my community to be of service," she said. "So we do whatever we need to do to help everybody get through this."

Rabbi Chuck Diamond, who once led the congregation at Tree of Life, said rabbis have been going to the morgue to be with the bodies in the days since the shooting.

"We're not supposed to leave the body alone, and we have people that come them and guard them and be with them, and while they're there they pray, they say sing psalms," he said. "So it's just a feeling that somebody shouldn't pass from this world by themselves."

Diamond said a ritual washing of the body is also part of the Jewish tradition to prepare for burial.

"That's what we call the great mitzvah, the great commandment, the great 'good thing' that we do," Diamond said. "It's a very difficult thing, too."

A burial traditionally takes place quickly in Judaism, ideally within a day or two, followed by a week of intense mourning.

"There's a real desire to return to a sense of routine or normalcy," said Rabbi Aaron Bisno, the senior rabbi at Rodef Shalom.

The ceremonies are an important part of the grieving process, said Rabbi Keren Gorban, of Temple Sinai in Pittsburgh.

"The physicality of a funeral and a burial is what makes it real, and so Jewish tradition is also very insistent on a burial happening," Gorban said. "The family is there when it happens, and friends and family help fill in the grave. And that's actually been some of the most powerful moments in funerals for most of the families that I've worked with over the years — actually putting the earth in the grave."

The timeline has been pushed back slightly because of the criminal investigation surrounding the shooting, but the process will begin Tuesday for the Rosenthals and their loved ones. The funeral director says there will be heavy security, and she's expecting an enormous crowd.

One of the people who will be there is Marcia Urum Kramer, who knew the brothers since they were children.

"And they were just — just so good ... always with a smile and caring," she said in an interview with NPR member station WESA. "Cecil and David have a special place in my heart."

During his time leading Tree of Life, Diamond said the two were always there — one out front, greeting everyone who came to worship.

"There's no question in my mind he was sitting in the back of the sanctuary, the chapel, at the time, greeting people at the time the gunman came in," Diamond said.

Services for the rest of the victims are being planned in the coming days, and Jewish leaders say there will be many months of mourning in Pittsburgh.