Accessibility links
Trump Visits Pittsburgh Despite Objections From Mayor, Jewish Leaders "President Trump, you are not welcome in Pittsburgh until you fully denounce white nationalism," a letter from some Jewish leaders said. The synagogue's Rabbi Jeffrey Myers escorted the president. 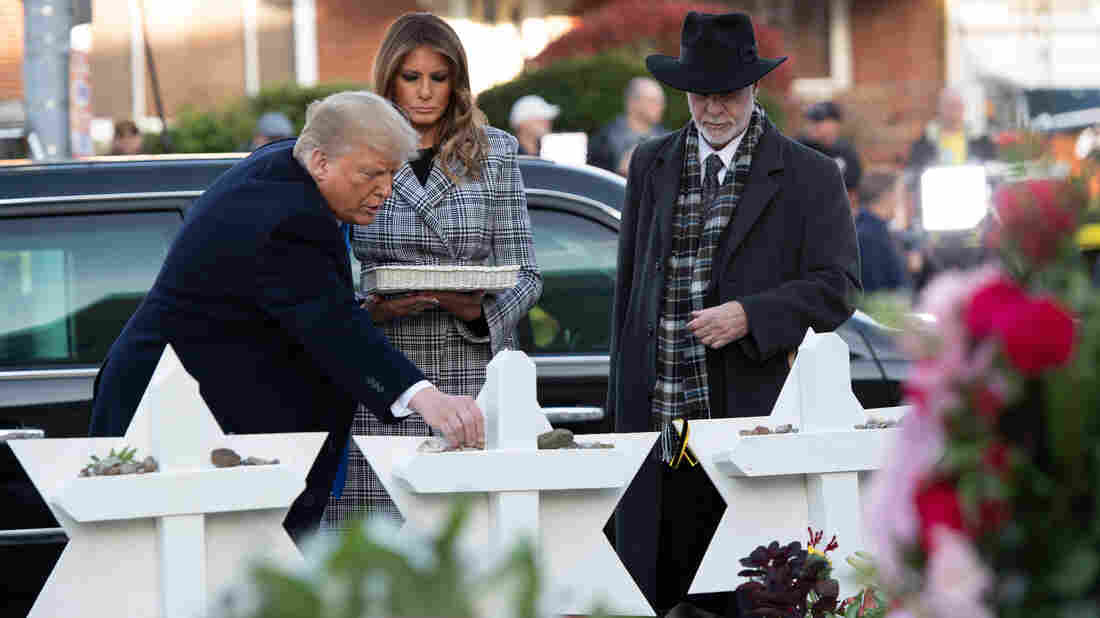 President Trump and first lady Melania Trump, alongside Rabbi Jeffrey Myers, place stones on a memorial as they pay their respects at the Tree of Life Synagogue in Pittsburgh on Tuesday. Saul Loeb/AFP/Getty Images hide caption 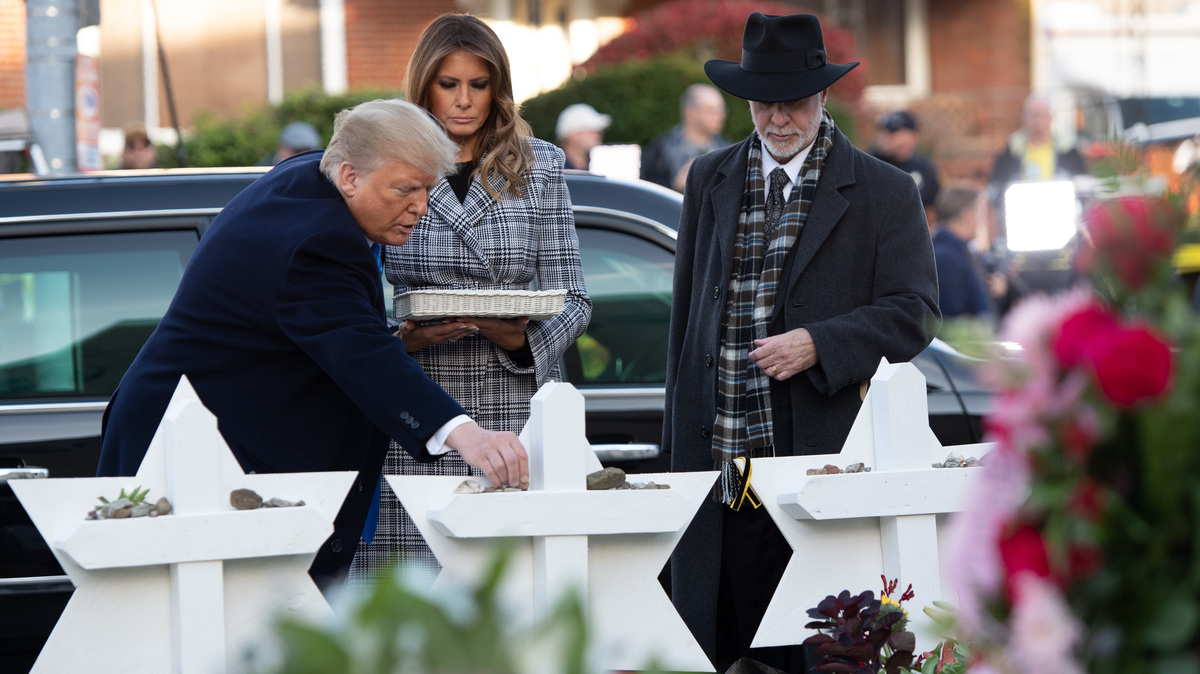 President Trump and first lady Melania Trump, alongside Rabbi Jeffrey Myers, place stones on a memorial as they pay their respects at the Tree of Life Synagogue in Pittsburgh on Tuesday.

President Trump traveled to Pittsburgh Tuesday, to pay tribute to the victims of a weekend massacre that claimed the lives of 11 worshipers at a synagogue. It also came on the same day mourners began to bury loved ones and demonstrators took to the streets to protest Trump's presence.

The president and first lady Melania Trump's first stop was to the Tree of Life synagogue where they took part in lighting one Yahrzeit candle for each of the shooting victims. The stones and flowers the Trumps placed at a memorial there were from one of the White House Gardens, according to Sarah Sanders, the White House press secretary.

Trump's daughter Ivanka and his son-in-law, Jared Kushner, both high-profile Jewish members of the administration, were also on the trip.

According to Sanders, Tree of Life Rabbi Hazzan Jeffrey Myers shared many of the details that happened on the day of the shooting. Sanders added the president was "moved by the visit."

Outside the synagogue, protesters took to the streets holding up signs reading, "We Do Bridges Not Walls," "No Place For Hate" and "Jewish Lives Matter."

Sanders said the president met with law enforcement officials and doctors, at the University of Pittsburgh Medical Center.

The visit comes despite the wishes of some political and religious leaders and Pittsburgh residents who felt that the president should come at a later date — or not at all.

The president's trip also comes on the same day as the first funerals for those killed Saturday.

Ahead of Trump's visit, the city's Democratic Mayor Bill Peduto said any visit by the president should come after the burials.

Just hours before the president's plane touched down, a spokesperson told NPR the mayor declined an invitation to appear with Trump, adding: "The mayor's sole focus is on the funerals that started today for victims, and on supporting their families."

The four top U.S. House and Senate leaders declined an invitation to join the president on his trip, according to several sources. Sources point out that local officials, including the mayor, had publicly urged the president and other national figures to avoid visiting until after funerals take place, citing public safety concerns.

Speaker Paul Ryan wasn't able to make it because of the short notice for the trip, according to Ryan's spokeswoman, AshLee Strong.

The president's critics wonder how he can "express his support for the American people and grieve with the Pittsburgh community," as the White House said he intends to do, while continuing to use divisive rhetoric toward those he considers political foes.

At a press briefing Monday, White House press secretary Sarah Sanders insisted the president only wants to unite the country, noting that some of his grandchildren, his daughter Ivanka and son-in-law, Jared Kushner, are all Jewish.

"The president cherishes the American Jewish community for everything it stands for and contributes to our country. He adores Jewish Americans as part of his own family," Sanders said.

Jewish leaders in Pittsburgh, affiliated with the progressive group Bend the Arc, wrote an open letter telling the president to stay away until he made overtures to certain communities, including those of the Jewish faith.

President Trump, you are not welcome in Pittsburgh until you fully denounce white nationalism.

"President Trump, you are not welcome in Pittsburgh until you fully denounce white nationalism," the letter said.

"Our Jewish community is not the only group you have targeted. You have also deliberately undermined the safety of people of color, Muslims, LGBTQ people, and people with disabilities."

But others have praised his reaction to the massacre.

Matt Brooks, the executive director of the D.C.-based Republican Jewish Coalition, told CNN that Trump's condemnation of anti-Semitism was "very powerful and strong."

At a service at Carnegie Mellon University on Monday, a mile from where the shooting happened, many in the community were still in shock and greeted one another with tearful hugs.

Some simply did not want to talk about Trump's visit, saying now is not the time for politics. Others expressed fear of confrontation between those who support the president and those who did not want him to come.

Joel Greenhouse, a Carnegie Mellon University professor of statistics, was cautiously optimistic Trump could act as consoler in chief.

"If he could, that would be really inspirational," Greenhouse said.

"And if that is not what will be the outcome, then it's probably better to leave us to our own devices to come together. And we're doing a pretty good job at it, I think."

Kelsey Snell contributed to this report.