Accessibility links
'Will The Circle Be Unbroken' Connects Musicians, Generation After Generation From family memorials to jam sessions to every show at the Grand Ole Opry, the familiar singalong helps people feel connected to those who have died — whether legendary musicians or loved ones.

Listen · 7:14 7:14
'Will The Circle Be Unbroken' Connects Musicians, Generation After Generation 7:14 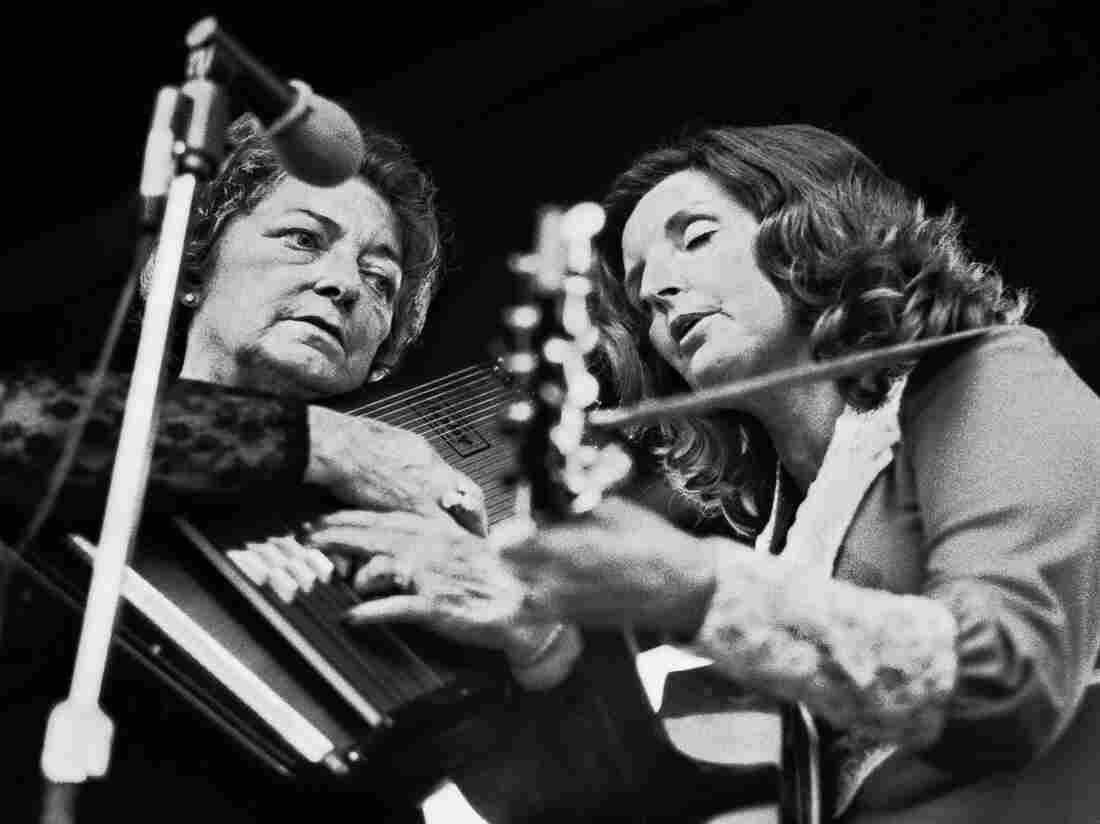 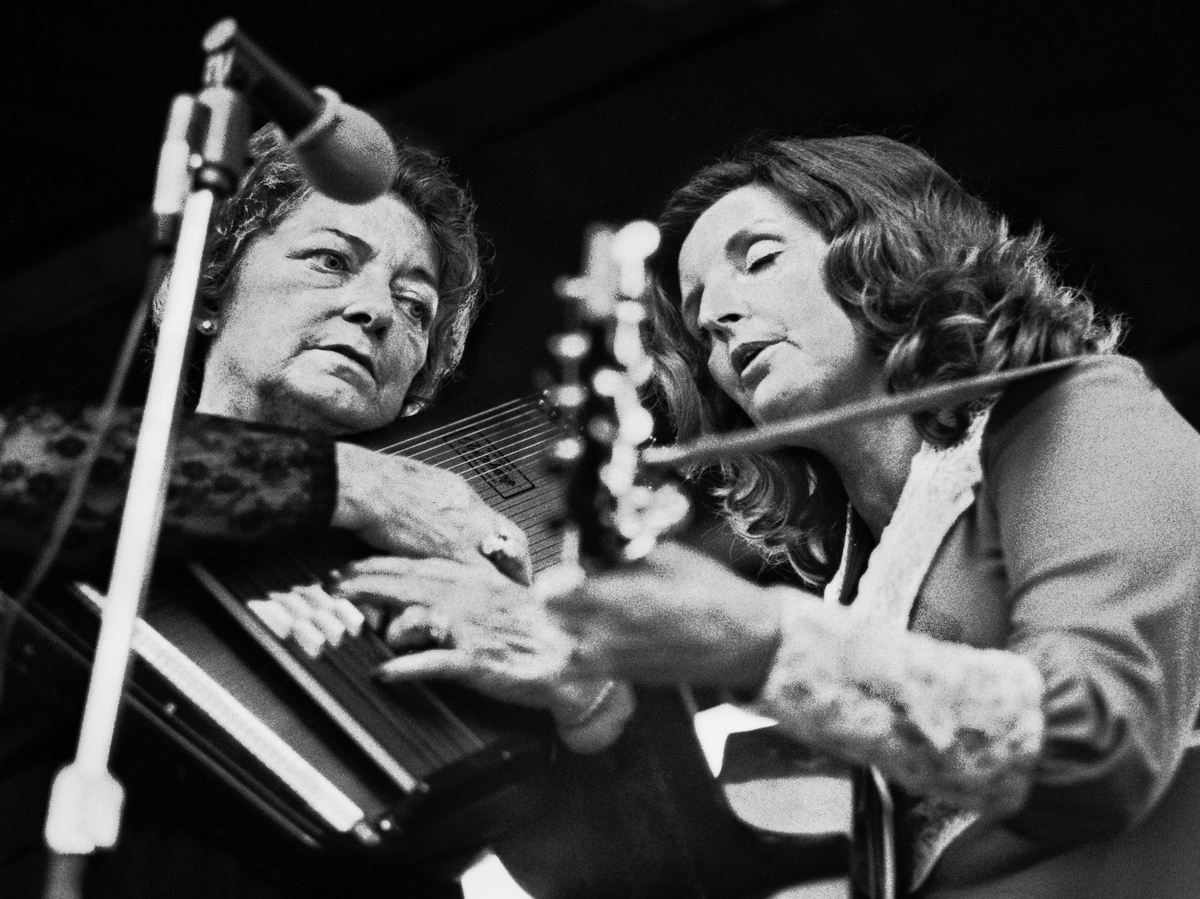 "Mother" Maybelle Carter (left) performs with her daughter Helen in 1977 at the A.P. Carter Memorial Festival in Virginia.

In the spring of 2010, a flood ravaged the building that is home to Nashville's Grand Ole Opry House, closing it for months of repairs. When members of the Opry finally returned to the stage that fall, no song could have captured the moment better than "Will the Circle Be Unbroken." Brad Paisley and the late Little Jimmy Dickens, country stars half a century apart in age, led the singalong as their cohorts streamed from the wings to join them.

The video of that performance screens now before the curtain goes up for each Opry show. The song's ability to help people feel emotionally, spiritually and musically connected to their present-day communities and those who have died, whether legendary musicians or loved ones, has made it a go-to ritual everywhere from worship services to family memorials, gospel sings, bluegrass picking parties, Americana award show finales and the annual Country Music Hall of Fame induction ceremony.

Bill Anderson has been a member of the Opry since 1961, so he's had lots of chances to invite first-time performers to enter the circle, literally, on the stage where their predecessors stood. That circle is a piece of wood cut from the floor of the Ryman Auditorium, the Opry's previous home.

"A lot of the young acts, I'll watch 'em when they come out, and it's almost like they're afraid to step into that circle," Anderson says. "It's like, 'Well, I'll come to the edge of it — but do I have the right to actually step onto that circle?' So it is a very significant part of the Opry, and the symbolism is not lost between that circle and the song."

The lyrics of "Will the Circle Be Unbroken" grieve a mother's death and pray that the circle of kinship and belonging will live on in this world and the next. The first verse depicts a heart-rending scene:

But the chorus clings to comfort:

Will the circle be unbroken
By and by, Lord, by and by
There's a better home awaiting
In the sky, Lord, in the sky

It was the Carter Family, one of the first groups to achieve recording stardom in what we now know as country music, that inscribed the tune in the songbook of American roots music. Patriarch A.P. Carter traveled around collecting and adapting gospel numbers, old-time ballads and sentimental songs, and brought them back to his wife Sara and her cousin Maybelle. Sara played autoharp, Maybelle combined melody and rhythm on guitar and both sang, with A.P. occasionally chiming in. When they put their spin on a hymn called "Can the Circle Be Unbroken," the record was their biggest seller of 1935. 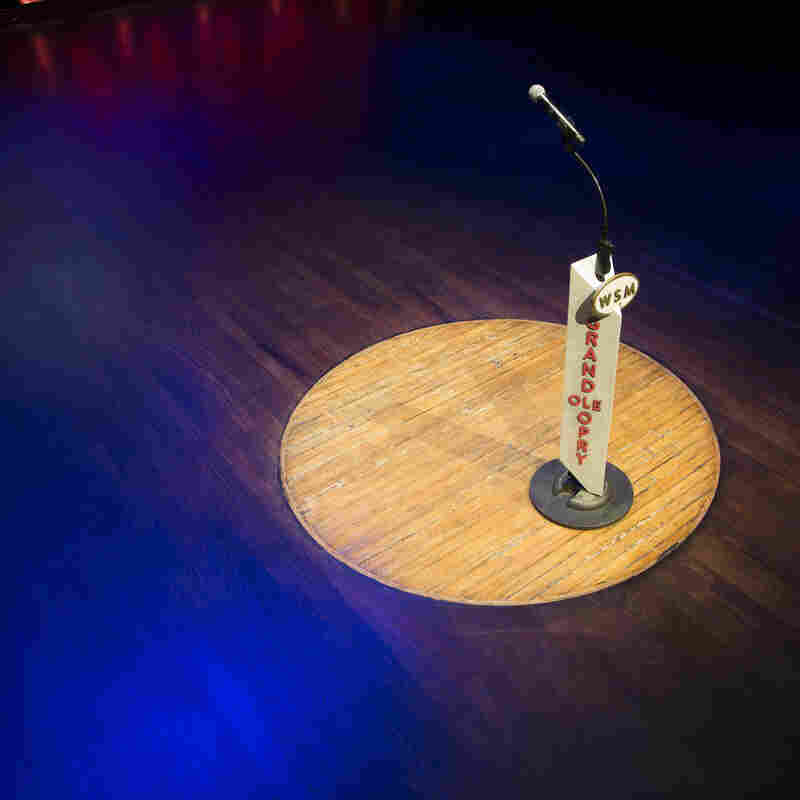 The famed circle on the Grand Ole Opry House stage is a piece of wood cut from the floor of the Ryman Auditorium, the Opry's previous home. Chris Hollo/Grand Ole Opry hide caption

In the decades to come, as the music industry grew to include new generations of performers, so did the Carter Family — and the song "Will the Circle Be Unbroken," as it became known, stayed in the repertoire. Mother Maybelle passed it down to her daughters Anita, Helen and June and June's daughter Carlene Carter grew up watching them practice at home and perform for audiences until the time came for her initiation.

"When us Carter girls start out," Carlene explains, "usually we get thrown on stage without any prep. We don't know how to sing. We don't know how to hold a mic or anything. We're young. But it's always during the chorus of 'Will the Circle Be Unbroken.' I've seen everybody in my family has come up doing that."

She's sung "Circle Be," as she calls it, countless times over the years—with family, friends and musical peers. It was her mother June Carter Cash's wish that her loved ones sing it when they laid her to rest, and Carlene often finds herself feeling reflective when she revisits the song these days.

"It has a different meaning to me now ... than it did when I first learned it and first sang it live in front of an audience," Carter says. "It was a celebration to me then — I had not experienced loss in the way that that song actually is about. Being older and having gone through the loss of my mother and my grandma, I feel closer to my people and to my legacy of family when I sing that song."

That connection to lineage has touched those outside the Carter bloodline too. In the early 1970s, the song gave the California country-rockers in the Nitty Gritty Dirt Band a way to bond with their old-time, country and bluegrass idols when they convened in the studio to record what would become the appropriately titled landmark album Will the Circle Be Unbroken. "It was as much about just getting to hang out with these folks as it was making music with 'em," founding member Jeff Hanna says. "Playing music was a bonus."

The Dirt Band and its guests rambled through more than three dozen standards, most with one vocalist or another designated as lead singer. But on the title track, Mother Maybelle Carter, Jimmy Martin and Roy Acuff each sang a verse and everyone else joined them for the chorus.

Hanna says he met listeners everywhere who responded to the way the musical collaboration bridged generation gaps. "The war was raging in Vietnam right then," he recalls, "and there was a lot of peace marches going on — the hippies versus the rednecks. There was a lot of these sides that just did not trust each other. Hearing folks tell us stories like, 'I hadn't talked to my dad in years, and we sat down and this record became a bonding point for us'? That's deep stuff. "

Collaborating with country elders helped pave the way for the Nitty Gritty Dirt Band to eventually cross over to the country format itself. By the time the band made its third Circle album in 2002, the tables had turned: Its members were now the veterans welcoming the contributions of newcomers.

That pattern is still playing out for musicians of a younger generation. Valerie June, a singer and songwriter who broke through in the roots scene early this decade, says she and her family lifted their voices to sing "Will the Circle Be Unbroken" a cappella while visiting her grandmother's Church of Christ congregation.

When she started on the coffeehouse circuit, June picked up the guitar part from the Carter Family version. She says she found it inspiring to discover that the song has crossed so many stylistic, regional and racial boundaries, with such artists as The Staple Singers making it their own.

How 'The Battle Hymn Of The Republic' Became Everybody's Anthem

"That's what studying a song like that — as it travels from Mavis to John Lee Hooker, from my grandmother's church and from my ancestors or from the Carter Family — that's what studying one single song taught me," June says. "It taught me that there are no rules and boundaries for music: If you keep researching the song, you might find that it's been done in so many different genres and so many different styles."

Learning "Will the Circle Be Unbroken" is still a rite of passage for budding musicians — like six-year old fiddler Stella Cope and her guitarist brother Finn, who took turns working through the tune for the first time with their teacher, accomplished multi-instrumentalist Deanie Richardson, while this reporter looked on. "We're gonna learn a new song, OK?" Richardson told her young students.

"It's called 'Will the Circle Be Unbroken.' "

Richardson sang Stella one line of the song at a time, and her young student picked the lyrics and melody up quickly, as though she'd heard them before. She stumbled only on the unfamiliar word "hearse," pronouncing it "horse." Before long, both kids were gingerly playing along on their instruments, with Richardson calling out the notes and chord changes and offering encouragement.

If the kids keep working at it, maybe they'll be able to join Bill Anderson in the Opry circle someday. For his part, Anderson says he's pondered the lyrics of "Will the Circle Be Unbroken" over the years, and while he loves the imagery of the chorus, he wouldn't mind it if the verses dwelled less on the undertaker and his hearse and more on celebrating community.

"I'd like to sit down with a couple of guys, maybe a Vince Gill or somebody from the Opry, two or three of us, and try to create a more all-inclusive positive vibe about our business, about our people," he says, "and the whole idea of we'll all get together again someday in the great hillbilly band in the sky."

Where the circle will remain unbroken.