Accessibility links
Preaching Gospel Of Love And Justice, William Barber Mobilizes Progressive Christians Barber has been compared to Martin Luther King Jr. He has revived the 1968 Poor People's Campaign while continuing to minister to his small town congregation. 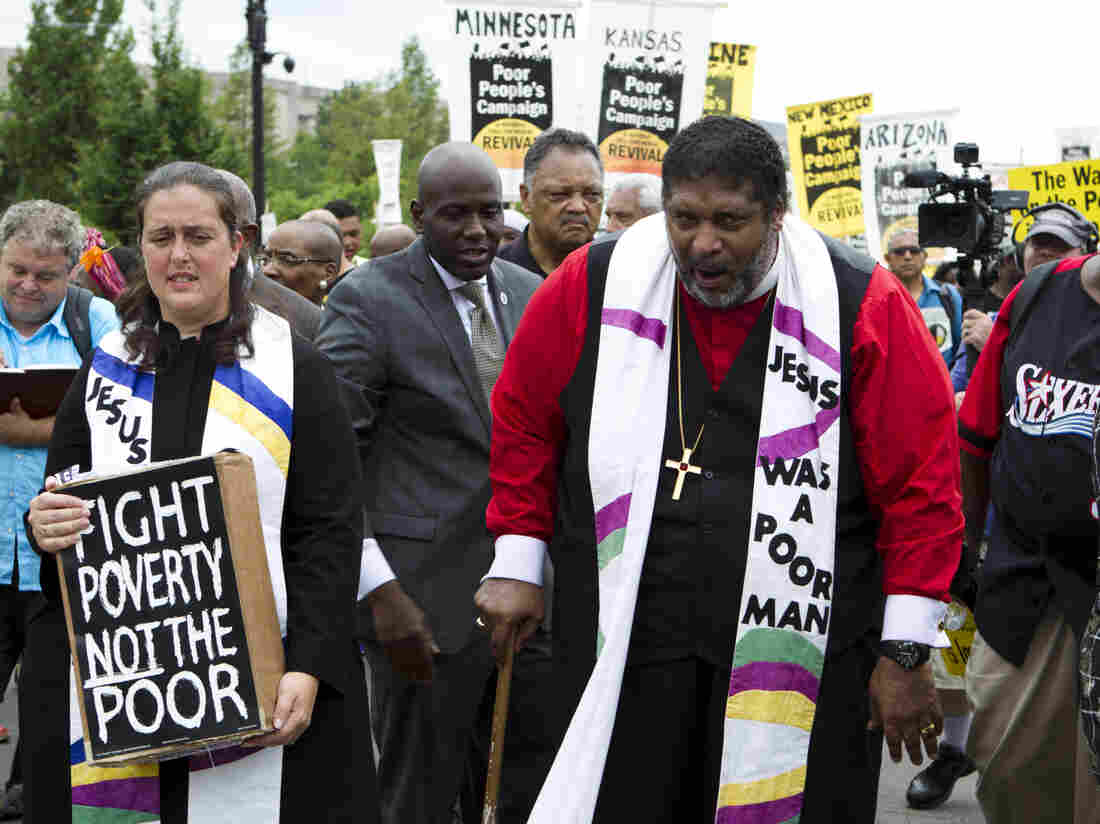 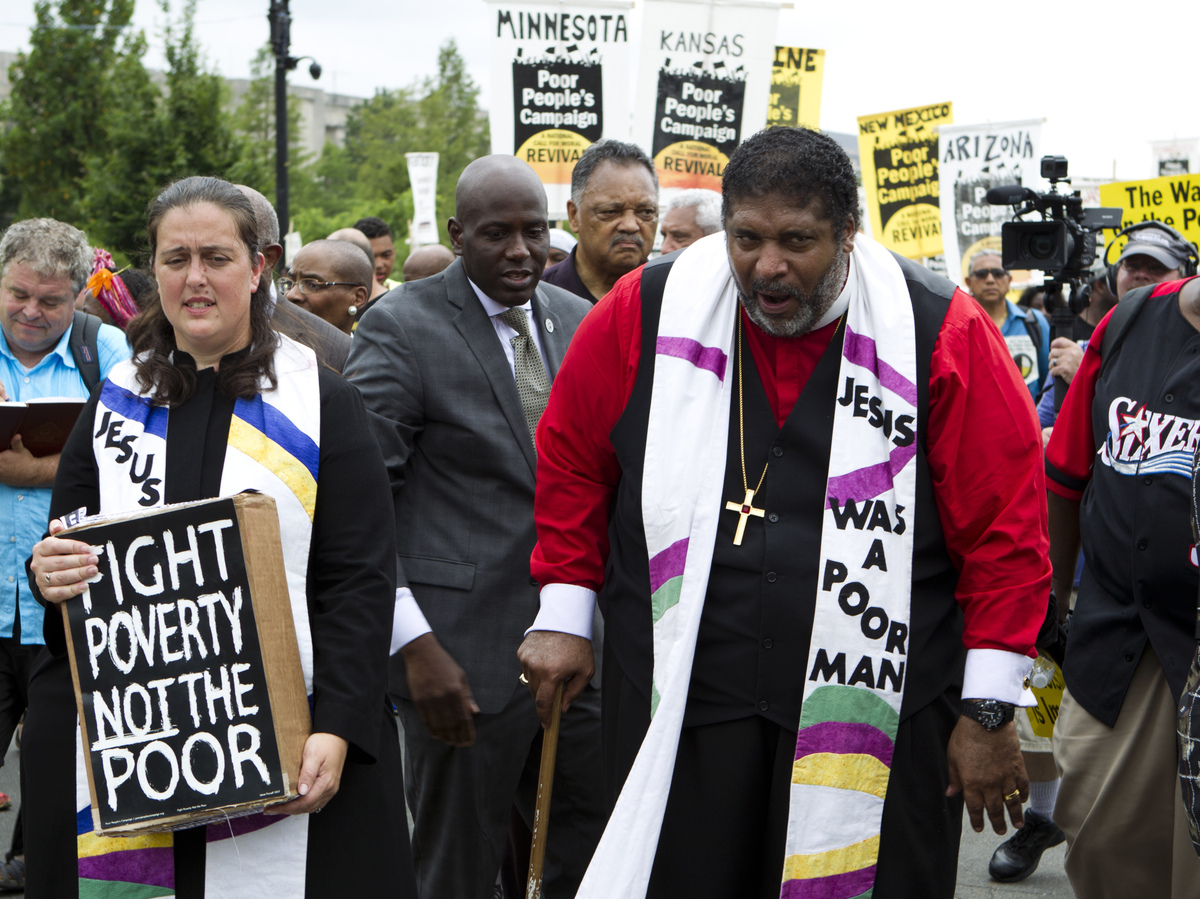 Only about 200 people typically worship each Sunday at the Greenleaf Christian Church in Goldsboro, N.C., but as many as 40,000 others follow the service via Facebook livestream.

That huge online following reflects the growing fame of the Greenleaf pastor, the Rev. William Barber. A passionate preacher, anti-poverty activist, and civil rights leader, Barber has emerged as perhaps the most important figure in progressive U.S. Christianity, even while serving his small local congregation. This month, he was one of 25 Americans to be awarded a coveted MacArthur "Genius Grant," with a no-strings-attached stipend of $625,000 over five years.

Barber, 55, has been the senior pastor at Greenleaf since 1993, but it has only been in recent years that he has gained a national following. As the leader of the North Carolina branch of the NAACP, Barber in 2013 launched the weekly "Moral Monday" demonstrations outside the state capitol in Raleigh to protest the enactment of restrictions on voting rights and a ban on transgender people using the bathroom that corresponds to their gender identity rather than biological sex.

In 2016, Barber electrified the Democratic National Convention with a thundering prime-time speech, calling on activists to be "the moral defibrillator of our time" and "shock this nation with the power of love!"

Princeton professor Cornel West, in a blurb that year for Barber's book The Third Reconstruction, said he was "the closest person we have to Martin Luther King, Jr. in our midst."

I don't know how to be a pastor and not be concerned about the things that impact my own congregation.

Barber himself sees it as his mission to continue King's work. Earlier this year, he and the Rev. Liz Theoharis of Union Theological Seminary revived King's 1968 Poor People's Campaign, organizing nonviolent protests around the country to demand living-wage laws, education equity, voting rights, universal health care, and an end to mass incarceration. On the day he learned of his MacArthur award, Barber was arrested in front of a McDonald's in Chicago, where he was leading a demonstration for a higher minimum wage.

King gave up his local Alabama ministry in 1960 to devote his energies mainly to national work, though he continued to serve as co-pastor and occasionally preached at his father's church in Atlanta. Barber, meanwhile, attends dutifully to the needs of his own small-town congregation while maintaining his outside activism. Within hours of returning from an anti-poverty demonstration in Kansas, he visited a parishioner in Goldsboro who was in critical condition and facing surgery. The next day he delivered the keynote speech at an "Awakening" meeting in Raleigh, focusing on the importance of voting, only to race back to Goldsboro immediately afterwards to preside at a wedding.

Movements come from the bottom up, out of community institutions, out of local churches, and local day-to-day stuff, not from the top down.

Having served his Greenleaf congregation for 25 years, Barber knows the members personally, and his Sunday morning services have an intimate small-church character.

"Is anybody celebrating an anniversary? How about a birthday?" Barber asked as he opened worship on a recent Sunday. When a man in the eighth row stood up, Barber led the congregation in singing, "Happy Birthday."

His local commitment while simultaneously leading a nationwide movement has impressed Marian Wright Edelman, who worked with Martin Luther King, Jr. on the original Poor People's Campaign and then went on to establish the Children's Defense Fund.

"Movements come from the bottom up, out of community institutions, out of local churches, and local day-to-day stuff, not from the top down," Edelman said. "So in that sense, he's grounded."

Barber's activism is all the more notable because he suffers from a debilitating and painful form of arthritis that has basically fused his vertebrae, making movement difficult. He is not able to turn his head from side to side, and he has trouble sitting. When he's driven in a car, he needs the passenger seat to be fully reclined. At a worship service or rally, while waiting his turn to speak, Barber leans against a wooden stool. At 6' 2" and with a heavy frame, he needs a cane to walk.

"He definitely is a disabled person," says Theoharis, his co-chair in the Poor People's Campaign. "I think it's really painful [for him], and yet he marches himself up stairs and stands and preaches for hours on end. He puts himself in those uncomfortable plane and car seats, just to be able to keep on spreading the gospel."

In speeches and conversation, Barber often quotes a verse from the book of Micah: What does the Lord require of you but to do justice, and to love kindness, and to walk humbly with your God?

For some people, being recognized as a "genius" might make it hard to "walk humbly" but Barber insists that will never be his problem.

"There was a time when they thought I'd never be able to walk again without a walker or being in a wheelchair," he says. "So every day is a day of grace. Every day is a day of humility. I know that any day my body could be shut down. So it's kind of hard for me to get up in the morning with a sense of arrogance and pride."

From his rallies on the national stage to his local ministry, Barber moves smoothly between political and spiritual messages. At the "Awakening" meeting in Raleigh, held at the historically black Shaw University, Barber challenged African-American leaders to mobilize their communities in preparation for the mid-term elections, citing the civil rights struggles carried out decades earlier.

Politics as a spiritual practice

The next day, in his Greenleaf sermon, Barber took a softer, more personal approach, emphasizing the peace that comes through faith. 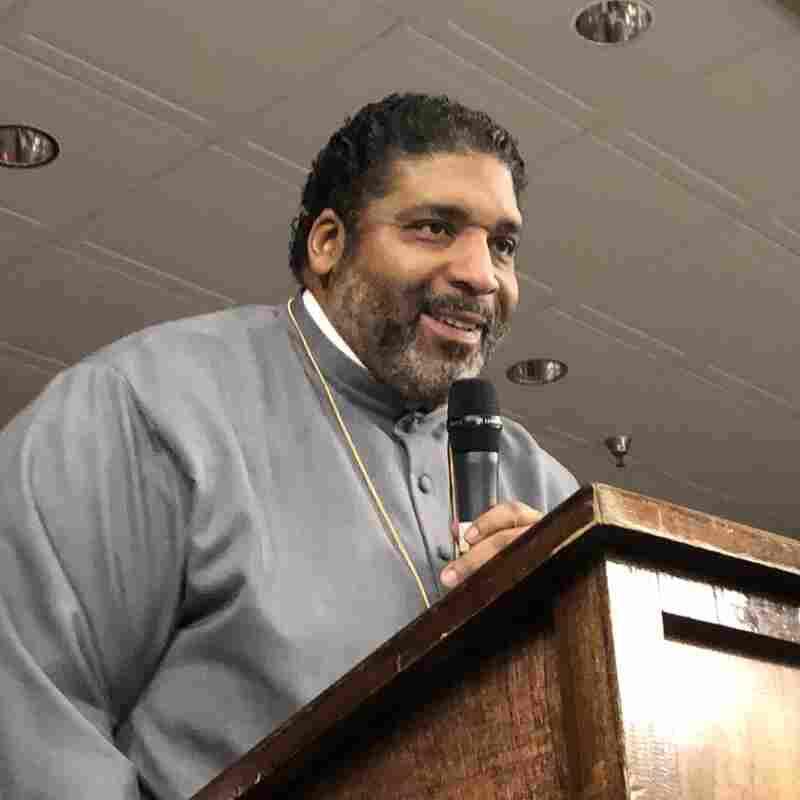 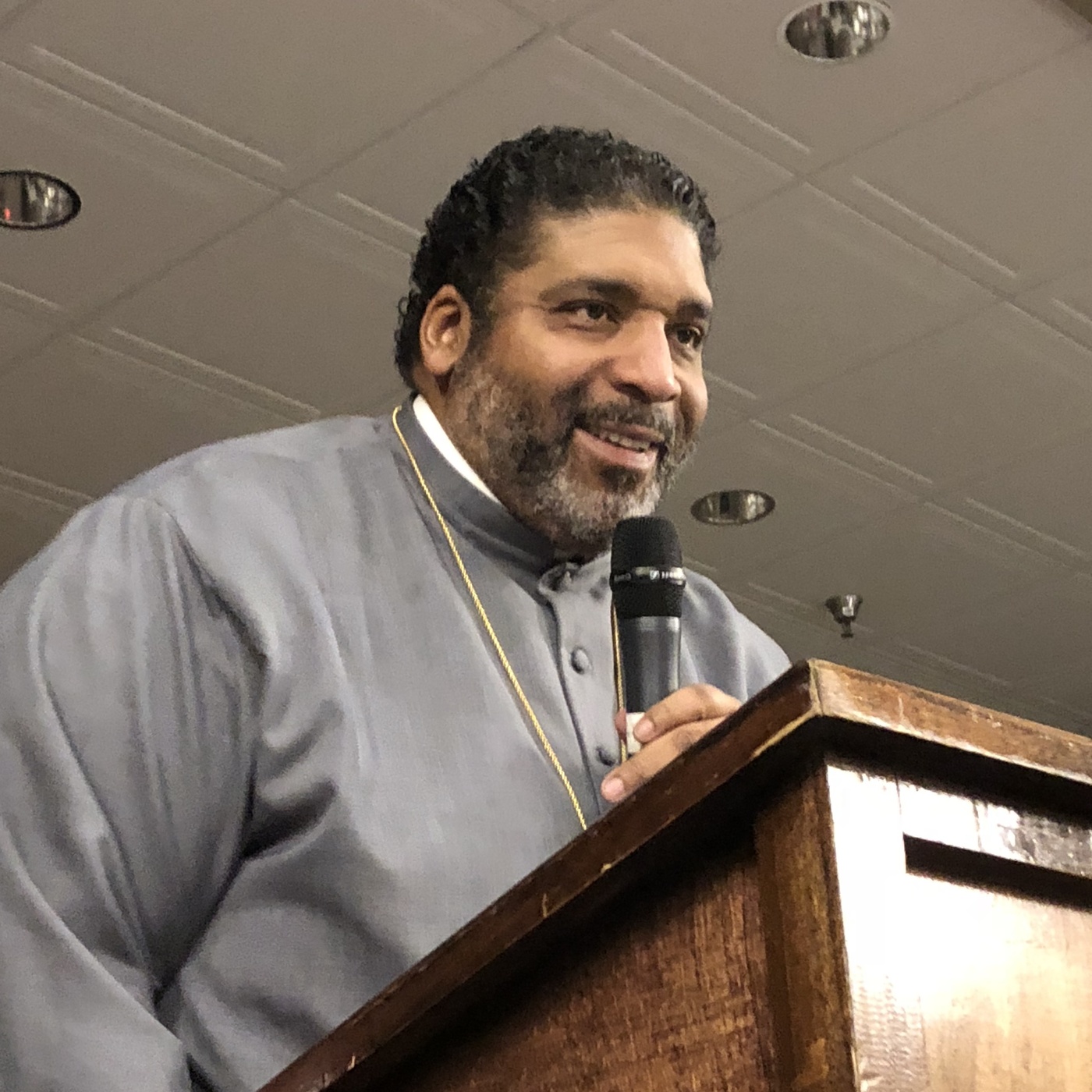 Once finished with his sermon, Barber made his way unsteadily to the side of the sanctuary. He said he could not get to the back of the church to greet the worshipers on their way out, but he invited those who wanted to speak to him to come up to where he sat.

Given his physical limitations, the time could come when Barber will have to choose between his local and national ministries. It would not be easy.

"I do not see any other reason to be alive if I'm not working to address the issues of systemic racism, poverty, ecological devastation, the war economy," he says, "and to challenge this false Christian narrative that says all God is concerned about is hating gay people, prayer in the schools, gun rights, [and] tax cuts, when I know that is not the Gospel."

Asked what he plans to do with the MacArthur grant he has just received, Barber says he was told the award was given not for what he had done, but what he had the potential to do.

"I just intend to keep going," he says, and then he returns to the words of the prophet Micah. "Otherwise, what's the point of living, if you're not going to do justice, love mercy, and walk humbly before God? What's the point?"