Accessibility links
Pakistan's High Court Acquits Asia Bibi, Christian Woman On Death Row For Blasphemy The woman, a 51-year-old illiterate farmhand, was convicted in 2010 after an argument with her Muslim co-workers. The country's religious right has called for her execution. 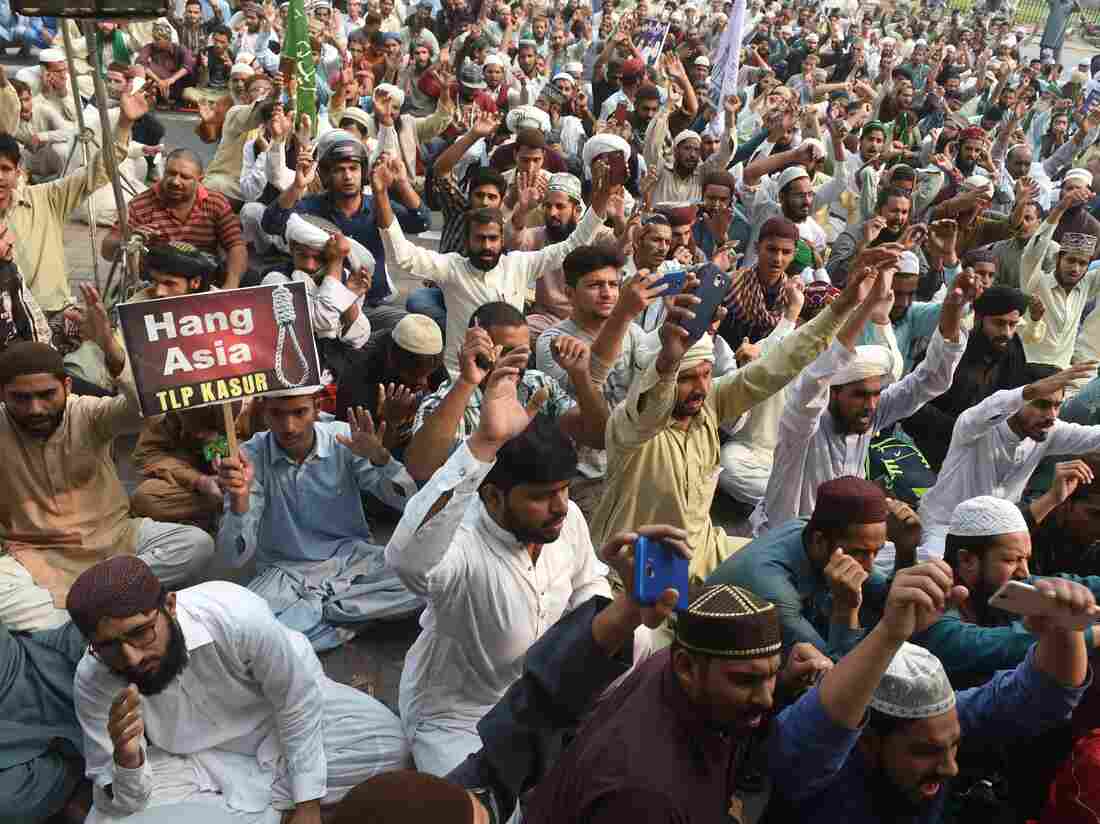 Supporters of Tehreek-e-Labaik Pakistan (TLP), a hard-line religious political party, chant slogans during a protest on Wednesday against the court decision to overturn the conviction of Asia Bibi. Arif Ali/AFP/Getty Images hide caption 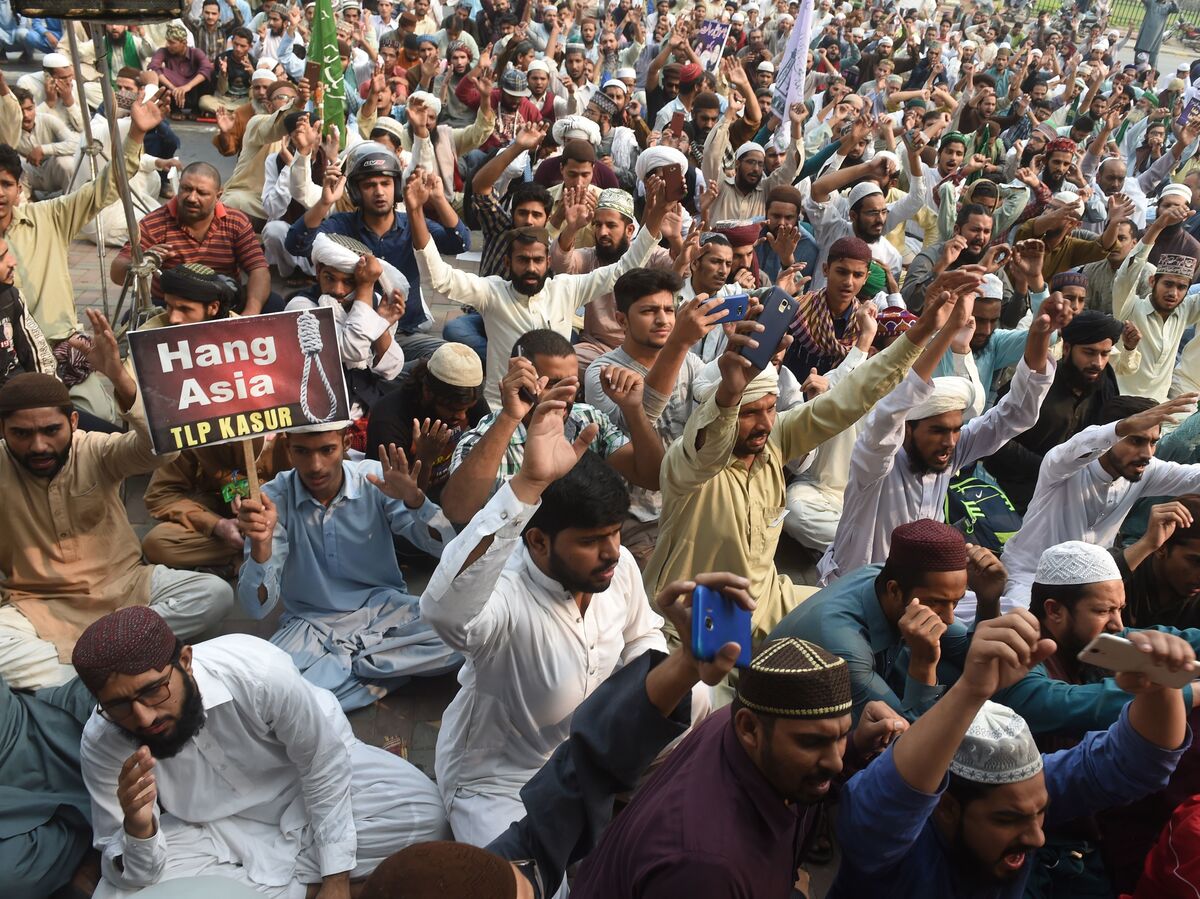 Supporters of Tehreek-e-Labaik Pakistan (TLP), a hard-line religious political party, chant slogans during a protest on Wednesday against the court decision to overturn the conviction of Asia Bibi.

Pakistan's Supreme Court on Wednesday announced the acquittal of Asia Bibi, a Christian woman who was convicted and sentenced to death in 2010 for blasphemy in a case that has roiled the country.

In the courtroom, it took less a minute for the chief justice, Saqib Nisar, to upturn a series of legal rulings that had kept Bibi on death row for eight years.

In terse remarks to the hushed, packed courtroom, he said that Bibi's conviction and sentence had been voided.

In a 56-page verdict issued after the ruling, the three-judge bench appeared to side with Bibi's advocates. They have maintained that the case against the 51-year-old illiterate farmhand was built around a grievance by her fellow Muslim workers, who appeared angry that she might drink from the same vessel as them. She was ordered by a local landlord to bring water to the women on a day while they were picking berries.

The judges cited the Quran, Islamic scholars and Shakespeare in their impassioned verdict, arguing that blasphemy allegations had led to vigilante killings. In Bibi's case, they wrote, her accusers had not conclusively proved her guilt.

"She appears to be a person, in the words of Shakespeare's King Lear, 'more sinned against than sinning,' " the judges said.

Shortly after the verdict was announced, security forces shut down access to the sweeping boulevards leading to the Supreme Court to prevent demonstrators from reaching the area.

Cities around Pakistan emptied out as merchants shuttered their shops and followers of an extremist religious group poured into the streets to mount angry demonstrations. They demanded Bibi be killed, regardless of the verdict. They said believing Muslims should punish the Supreme Court judges for ruling against Islam.

"This decision is against the wishes of the entire Muslim community," warned protester Mohammed Fayyaz. "They are playing with fire."

A leader of the group, known as Tehreek-e-Labaik, or TLP, called for the judges to be killed.

If her death sentence had been carried out, Bibi would have been the first person executed by the state under the blasphemy laws.

The Supreme Court heard Bibi's appeal against the death sentence on Oct. 8, but it was not publicly announced until Wednesday.

Bibi, a wife and mother of two children and three stepchildren, was on death row and held in solitary confinement for more than eight years. A previous appeal hearing was adjourned in 2016 on a legal technicality.

Pakistan’s Supreme Court upturned the death penalty against a Christian woman who was on death row for 8 years after her fellow Muslim farmhands accused her of insulting Islam. The verdict quotes the Quran and Shakespeare, and it unleashed death threats against the judges. pic.twitter.com/U55MKbjwij

Bibi's case has always stood out for underscoring the enormous power of the country's extreme religious right wing.

"Bibi's case was a watershed," said Ammara Durrani, an Islamabad-based analyst and expert on government policy. "This is the first time that a Christian woman, a non-Muslim woman, was charged under the blasphemy law. She was jailed and she was awarded the death penalty."

Bibi's case has elicited international concern since it first began.

In 2010, Pope Benedict XVI called for her release. Pope Francis met with her family in 2015. In the same year, Mayor of Paris Anne Hidalgo declared Bibi an honorary citizen of the French capital. 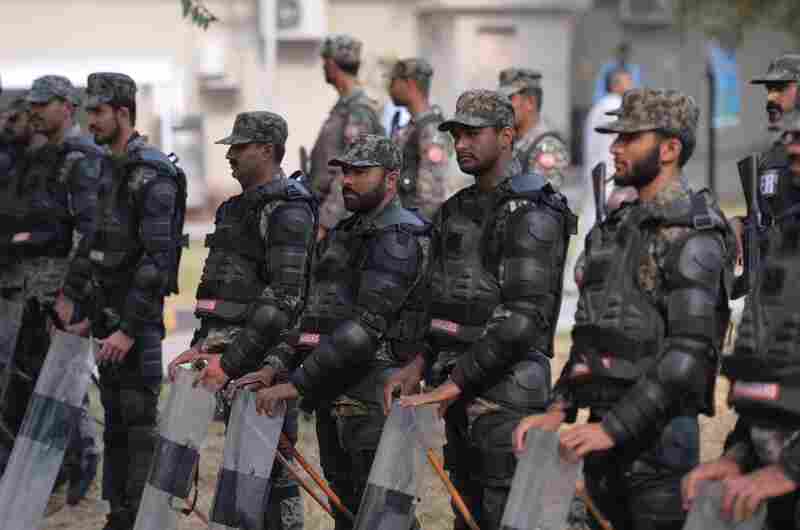 Pakistani paramilitary soldiers stand guard outside the Supreme Court building in Islamabad on Wednesday. The landmark case has incited deadly violence and reached as far as the Vatican. Aamir Qureshi/AFP/Getty Images hide caption 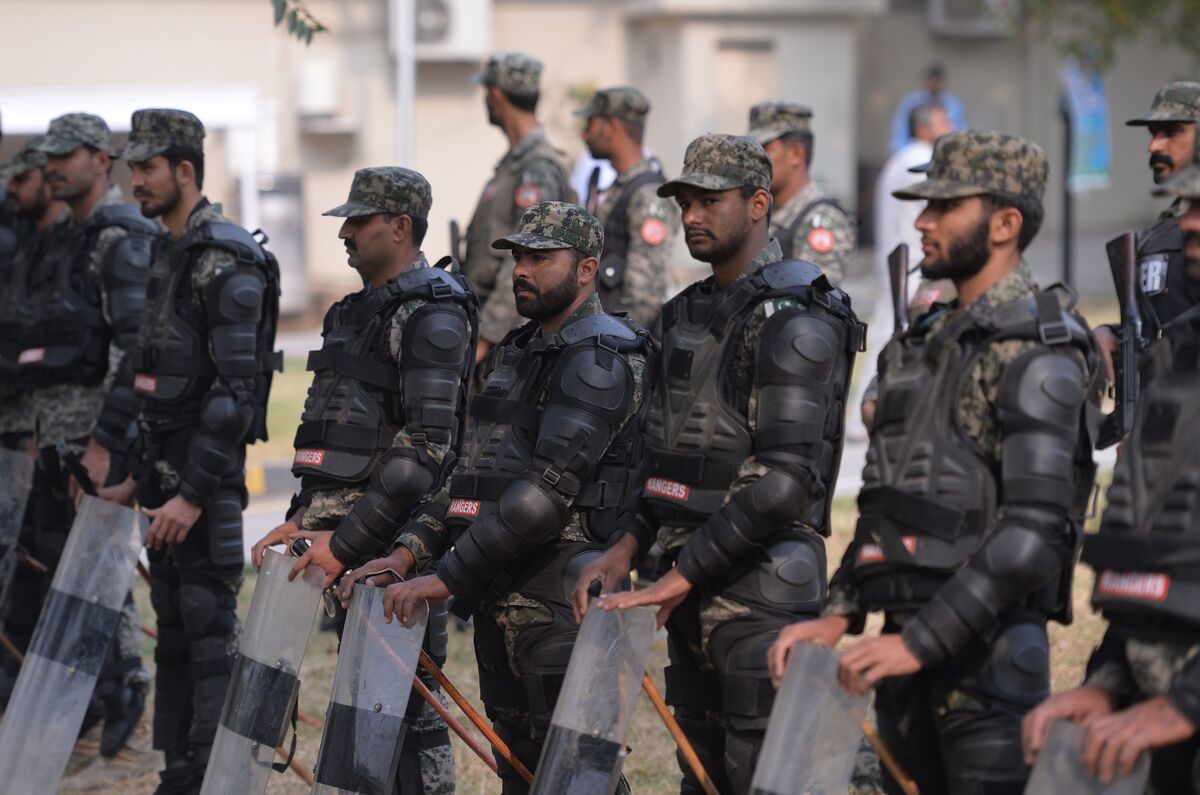 Pakistani paramilitary soldiers stand guard outside the Supreme Court building in Islamabad on Wednesday. The landmark case has incited deadly violence and reached as far as the Vatican.

When in 2011 the prominent governor of the Pakistani province of the Punjab, Salmaan Taseer, spoke in defense of Bibi and criticized Pakistan's blasphemy laws, he was assassinated by his bodyguard. The bodyguard was later executed, but is revered as a near saint by many on the religious right, who set up a shrine for him on the outskirts of Islamabad. Two months after Taseer's death, a Christian minister, Shahbaz Bhatti, who had also been critical of blasphemy laws, was also shot and killed.

Since then, the case has become a rallying cry for Tehreek-e-Labaik, an extremist group led by an incendiary cleric, Khadim Hussain Rizvi. It was his followers who rushed to demonstrate across Pakistan. Other clerics quickly condemned Bibi's acquittal.

"The Supreme Court has pushed the country towards anarchy," said Hafiz Ahtesham, a prominent radical cleric, in a message sent to local reporters.

"Now the decisions will be taken on roads and not in courts," he wrote. "Anyone who kills Asia will be a hero to Muslims. If I get a chance, I will also kill her. Those who cooperated with Asia – they also share her crime," he said.

The analyst Durrani said Pakistan's activist high court was likely thinking of the country's bruised image as it ruled on the case.

The justices were concerned "with an overall impression and perception about our country — that this is a pariah country. That this is a hotbed and breeding ground for extremism for radicalization," Durrani said.

She said the ruling might prompt wider debate about "how the judiciary would tackle their blasphemy cases."

Upon her release, Bibi is expected to leave the country because of continuing threats against her and her family. Several Western countries have offered her family asylum, but they are understood to be moving cautiously. It appears diplomats fear a backlash against them here in Pakistan if they are seen as interfering in the case.

So far, the Pakistani government, led by Prime Minister Imran Khan, who has praised the country's blasphemy laws, has remained silent. Fawad Chaudry, the government spokesman, refused to comment outside the Supreme Court on Wednesday, local media reported.

Pakistan's blasphemy laws and the death penalty for breaking them have drawn concern from international rights organizations, not least because they can be misused to settle feuds, grab land, or persecute religious minorities by making false allegations.

The state has never executed anyone under the law, but vigilantes have taken the punishment of those accused into their own hands. A young Pakistani Christian accused of blasphemy was murdered by a mob in 2014. A college student, Mashal Khan, was killed by his vigilante classmates in April 2017.

Bibi's husband told The Associated Press that he hoped the family could now be reunited.

The ruling was also a bittersweet moment for Pakistan's liberals, who often point to the assassination of the Punjab governor, Taseer, as a dark turning point for the country.

"I celebrate that Asia Bibi has finally been taken off death row, but I grieve that she was on it in the first place," wrote Natasha Japanwalah, a schoolteacher and writer from Karachi, in a Facebook status update.

"Living out days like these, we need hope — and Pakistan's Supreme Court has shot a glimmer of it into the world today. A glimmer worth clinging to, when we need reminding that good is possible. I'm proud of my country, today."