Accessibility links
Chick Corea: Back In Boston The legendary pianist has lived many lives as a musician, from post-bop wunderkind to free-jazz maverick to fusion explorer to chamber-jazz eminence.

Chick Corea: Back In BostonWBGO and Jazz At Lincoln Center

Pianist Chick Corea has lived many lives as a musician, from post-bop wunderkind to free-jazz maverick to fusion explorer to chamber-jazz eminence. That imprecise tally leaves out a lot in an expansive career — but, more to the point, it creates the false impression that Corea compartmentalizes his musical output, when the truth suggests something far more holistic.

Jazz Night in America caught up with Corea during a recent gig at Scullers in Boston — just across the river from Chelsea, Mass., where he was born and raised. He was on tour with a new trio he calls Vigilette, with Carlitos Del Puerto on bass and Marcus Gilmore on drums. The set list combined songbook standards like "On Green Dolphin Street" with originals like "Rhumba Flamenco," each number delivered with Corea's brand of articulate flair.

A few days after the performance, Corea sat down with Christian McBride — our host, and his longtime musical collaborator — for a collegial and far-ranging conversation. They discuss the first time Corea saw Miles Davis, an experience that changed his life, and one he recalls with absolute detail. Corea also reflects on the role of an artist: "We have a mission to go out there and be an antidote to war, and all of the dark side of what happens on Planet Earth," he says. "We're the ones that go in and remind people about their creativity."

More From Jazz Night In America: Video Episodes And Shorts

October 24, 2019 • The two instrumental masters came together for the first time in a gracious meeting of musical minds.

October 2, 2019 • Rhiannon Giddens gets the spirit of fierce rock and roll independence as she sings "Up Above My Head," made famous by Tharpe, at the 2019 NPR Music Turning the Tables concert at Lincoln Center.

October 2, 2019 • Chills all around as Lizz Wright and Rhiannon Giddens invoke the spirit of Marian Anderson with "Deep River" and "Go Down Moses" at the 2019 NPR Music Turning the Tables concert at Lincoln Center.

October 2, 2019 • Just try to keep up with Charenée Wade as she slays "Cotton Tail," which Ella Fitzgerald included in her 1957 Ellington songbook album, during the 2019 Turning the Tables concert at Lincoln Center.

October 2, 2019 • Valerie Simpson burns it all down performing "Send Me To the 'Lectric Chair," a signature song of Bessie Smith, during the 2019 NPR Music Turning the Tables opening concert at Lincoln Center.

October 2, 2019 • Courtney Marie Andrews and Rhiannon Giddens harmonize with all their hearts on the Carter Family's "You Are My Flower" during the 2019 NPR Music Turning the Tables opening concert at Lincoln Center.

October 2, 2019 • Lizz Wright stuns with a somber version of "Strange Fruit," made famous by Billie Holiday, during the 2019 NPR Music Turning the Tables opening concert at Lincoln Center. 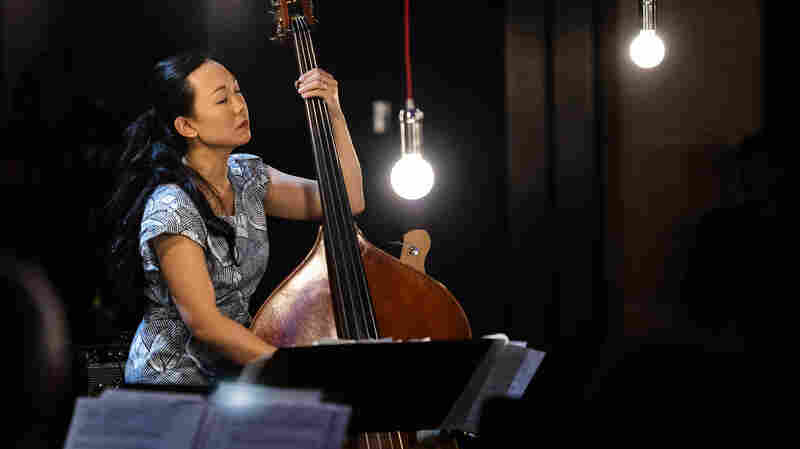 September 19, 2019 • Jazz Night in America teamed up with CapitalBop's Traveling Loft Series to present a performance of Linda May Han Oh's Aventurine at NPR's Studio One in Washington, D.C.

Back To Top
More from Jazz Night In America: Video Episodes And Shorts