Accessibility links
Louis Cha, Who Wrote Beloved Chinese Martial Arts Novels As Jin Yong, Dies He's been called China's Tolkien, its Martin, its Rowling — all in one. With his adventure stories rooted in ancient China, Louis Cha gave life to decades' worth of martial arts films. 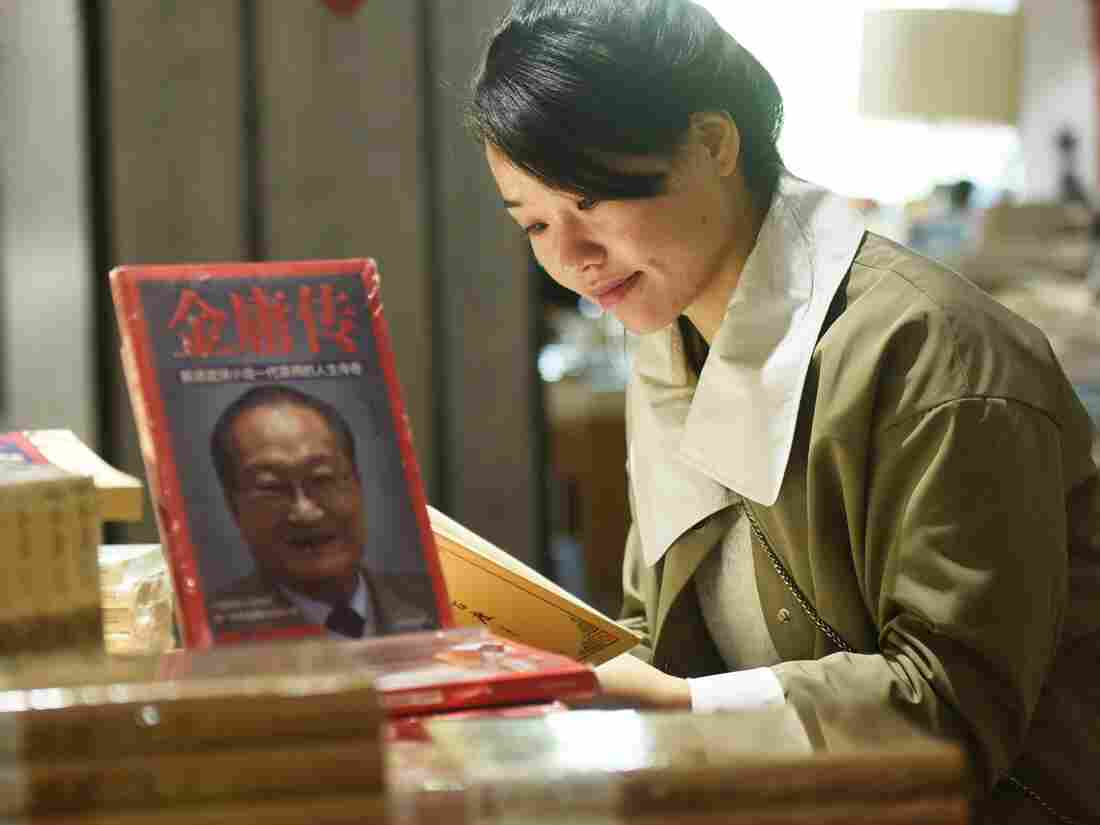 Novelist Jin Yong — the pen name for writer and journalist Louis Cha — has died, triggering tributes and mourning from his fans. Here, a customer reads a book at a memorial section at a bookstore in Hangzhou, Zhejiang Province. VCG/VCG via Getty Images hide caption 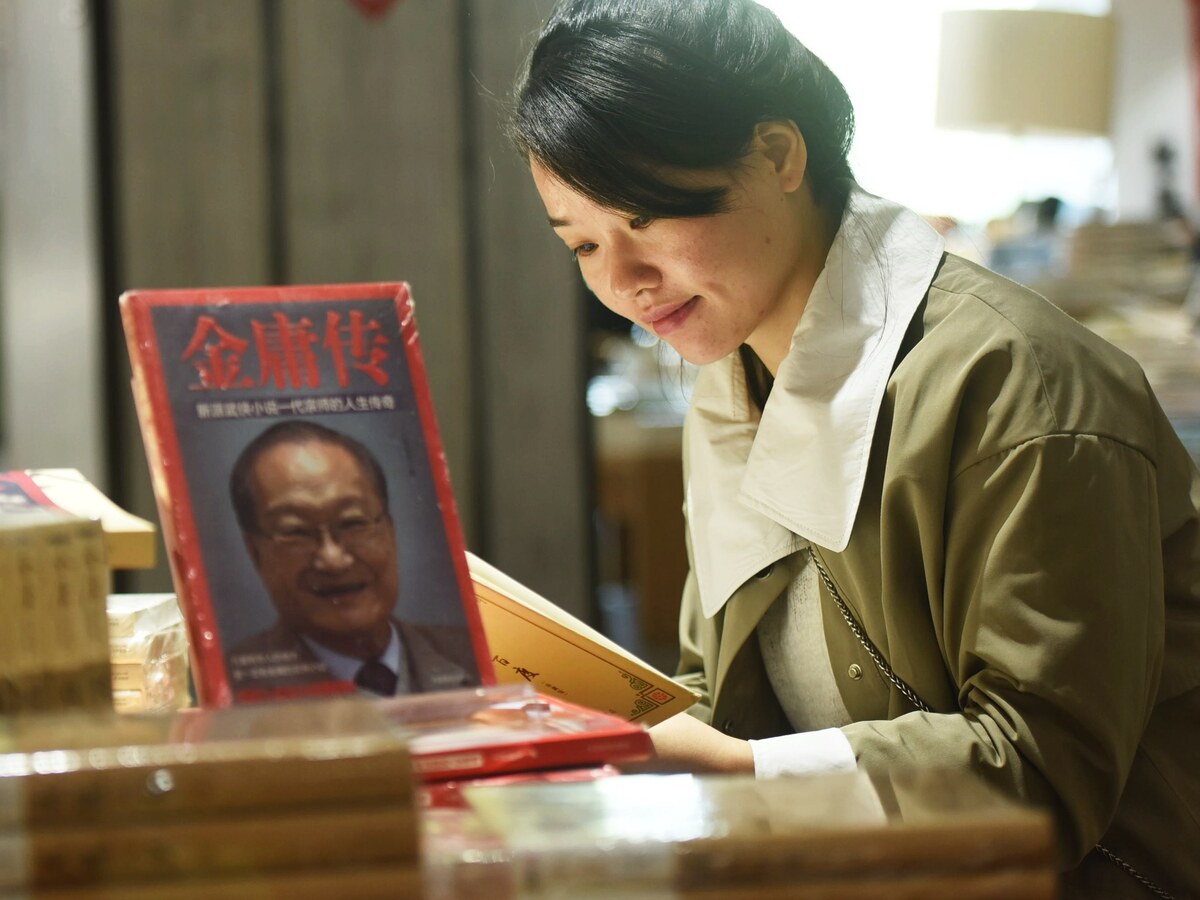 Novelist Jin Yong — the pen name for writer and journalist Louis Cha — has died, triggering tributes and mourning from his fans. Here, a customer reads a book at a memorial section at a bookstore in Hangzhou, Zhejiang Province.

Millions of people are mourning Jin Yong — the pen name for novelist Louis Cha — after the giant of Chinese pop culture and literature died on Tuesday. Cha wrote epic stories that created an underpinning for the pageantry and fantasy of martial arts films.

Cha was 94. He died in Hong Kong, where he moved from mainland China in the 1940s to work as an author and journalist. In addition to his novels in the wuxia adventure genre, Cha co-founded the newspaper Ming Pao, which he led for decades. His work has been translated into numerous film, TV series, and stage productions.

Cha had suffered from liver cancer and dementia in his last years, the South China Morning Post reports.

Writing as Jin Yong, Cha has drawn comparisons to J.R.R. Tolkien — but that sells him short, according to Eileen Chow, co-director of Duke University's Story Lab project. To fully encapsulate his impact, she says, one should think of an author who combines Tolkien with George R.R. Martin, J.K. Rowling and Neil Gaiman.

Would be remiss not to conclude w the Jin Yong 金庸 acrostic poem made of the 1st character in the title of each of his 14 works:

In the world of Jianghu (literal translation: "rivers and lakes") — the liminal sphere in which skilled knights and lethal princesses seek love and justice — Cha told complex stories that sometimes mirrored the complicated lives of Chinese who saw their society transform under Chairman Mao. Earlier this year, he acknowledged using political allegories to describe events of the Cultural Revolution, in an interview with The New Yorker.

In the process, Cha also gave readers a touchstone of the country's cultural history, creating "a China of the mind," Chow said. She added, "it would be hard to argue that there has been a more widely-read and more influential writer in Chinese in the modern era."

Comparing Cha to Shakespeare, former Morning Post writer Oliver Chou told the newspaper, "No other Chinese authors would appeal so much to Chinese readers, regardless of dialects and political views. The late paramount leader, Deng Xiaoping, was said to have sent secret agents to get him a set of Cha's novels in Hong Kong in the early 1980s."

In one famous example of the hidden complexity found in Cha's work, the first letters from the titles of his 14 martial arts novels create an acrostic couplet. According to a translation by Chow, it reads:

Whirling snow blankets the sky, I hunt white deer
Laughing as I write legends of chivalry and romance.

Novels penned by Jin Yong began appearing in serial form in 1955, with The Book and the Sword. In the years that followed, the stories often appeared in Cha's own newspaper.

"He is best-known for his martial arts fiction series The Condor Trilogy," NPR's Rob Schmitz reports from Shanghai, adding that Cha's books have sold more than 300 million copies worldwide.

The Condor Trilogy also features one of Cha's most memorable characters: Huang Rong, who runs away from her family, poses as a beggar boy, learns the intricacies of deadly kung fu, and uses her intellect and guile to help her lover, Guo Jing, defeat his enemies. Her skills range from succulent cooking to mastery of the secret Dog Beating Staff fighting style.

The role has been played by many actresses — so many that Asia One held an online poll in 2017 to ask who had done it best.

Besides his writing, Cha was also known for his involvement in politics. He was part of the Hong Kong committee that monitored the territory's transfer of sovereignty to China in 1997. Years earlier, he resigned from a separate committee to protest the deadly 1989 crackdown in Beijing's Tiananmen Square.

"He was an advocate of democracy and freedom," Schmitz says. "One of his most famous lines is: 'Life is like a fight. Then, you leave quietly.' "

To get a sense of the far reach of Cha's influence, consider that his ardent fans include Jack Ma, the billionaire founder of retail giant Alibaba. As news of the author's death spread, Ma — a former English teacher — posted photos of himself and Cha, along with a lengthy message on the social media site Weibo. In his post, Ma praised Cha for teaching lessons of bravery, dedication and integrity.

Without Cha, Ma said, there would be no Alibaba. He even borrowed his own nickname, Feng Qingyang, from a master swordsman in the 1967 novel The Smiling, Proud Wanderer. He encouraged Alibaba employees to choose their own characters from his works. And as Ming Pao reports, Ma named his own office and other parts of Alibaba's headquarters after places in Cha's stories.

After The Deer And The Cauldron was published (again, in serial form) in 1972, Cha stopped writing martial arts novels. And in the last decades of his life, the author faced one nagging problem: the constant demand from his legion of fans that he write more books for them to read.

"I'm getting old, and my imagination is not the same as it was in my younger days," Cha told The New York Times in 1989.

The world may not have known the richness of Cha's imagination, had he not been pressed into service as a serial novelist. As the Times noted in that profile, Cha was a young copy editor when he was asked to come on as a temp, simply because his newspaper's fiction writer had resigned.