Accessibility links
Review: 'Bohemian Rhapsody' Will (Only Occasionally) Rock You A fearless performance from Rami Malek and rock-solid rock anthems can't lift this listless musical biopic out of the sea of clichés in which it treads water. 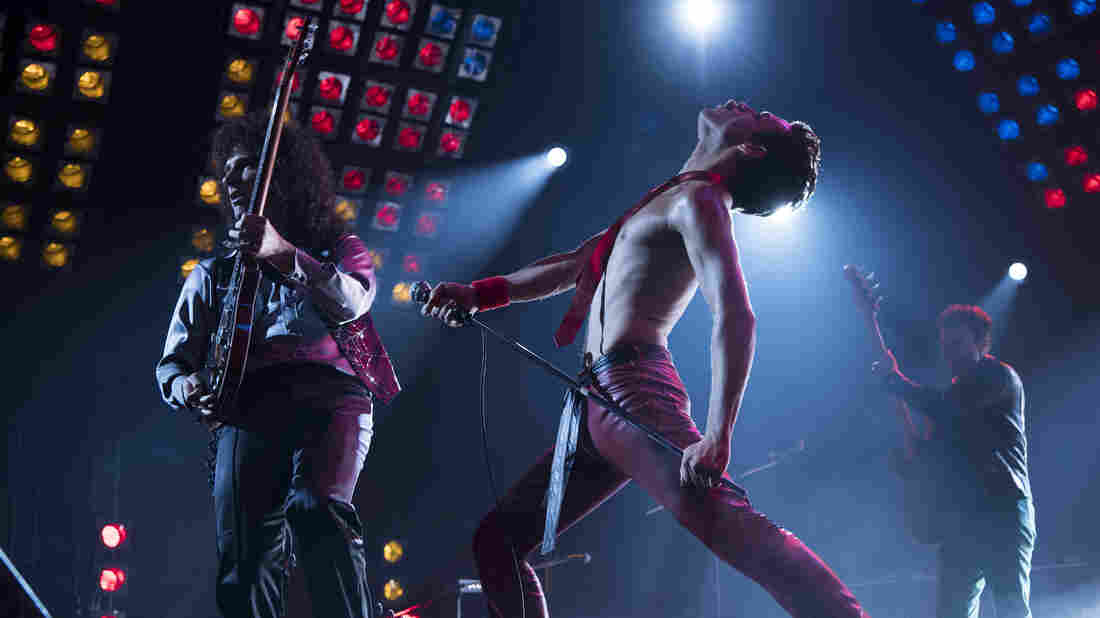 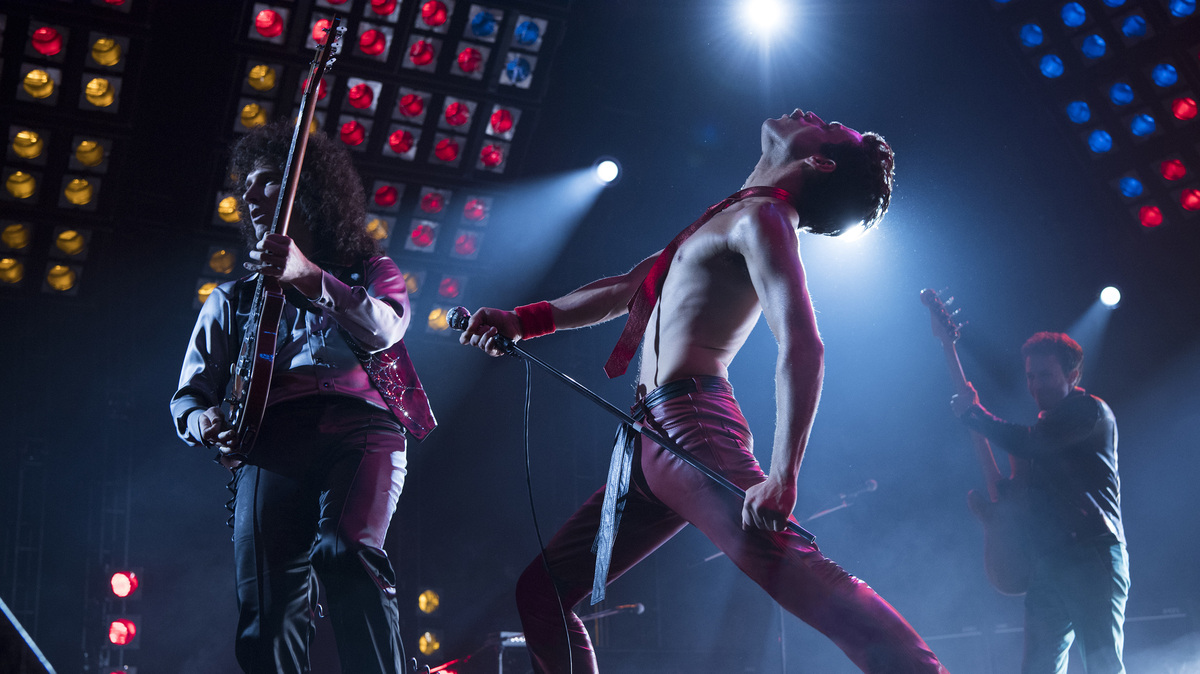 Let's talk about the teeth.

They're impossible to ignore, that prosthetic ring of upper chompers worn by Rami Malek in the listless musical biopic Bohemian Rhapsody as he — and the film itself -- lurches through all the now familiar, VH1 Behind The Music stations of the rock-music cross: discovery, meteoric rise, betrayal, precipitous fall, contrition, redemption.

They're ... something, those teeth. They distend Malek's upper lip, just as the real ones did Freddie Mercury's — more, actually; it's not so much an overbite as an überbite. They're so hilariously extreme, in fact, that they make Steve Carell's Foxcatcher nose look like Ralph Fiennes' Harry Potter one.

They're also wildly unnecessary, as it turns out, because Malek's performance is so fearlessly committed — he's Freddie by way of Eartha, all slithery and sinewy and sinuous — that he could have left them in the makeup trailer and still managed to locate, and drive home, Mercury's mercurial effect.

But their conspicuous presence is emblematic of the film's lack of confidence in itself. What could be a strutting, fabulous testament to the glamour of Queen's arena-rock showboating is instead hamstrung with the need to explain, and then underline that explanation, and then circle it, then reproduce it in a slightly larger font, then sit us down and read it to us. Through a megaphone.

'Bohemian Rhapsody,' We Will Not Let You Go

Two members of Queen are listed as consultants, which may be one reason the film, directed by Bryan Singer until he was replaced by an uncredited Dexter Fletcher about two-thirds of the way through principal photography, feels so safe and circumspect. The band has conflicts, sure — but the screenplay (by Anthony McCarten, whose scripts for Darkest Hour and The Theory of Everything came at their subjects from similarly unsurprising angles) constantly reminds us that they're all a sweet bunch of blokes who just want to entertain, man. And even Freddie's ego-driven rise and subsequent descent into drug-fueled decadence is carefully couched as that of a good-hearted innocent falling under the sway of eeeEEEeeevil manager Paul Prenter (Downton Abbey's Allen Leech, getting the villain edit).

Early worries that the film might elide Mercury's queerness prove unfounded, mostly. Sort of. True, his long romance with Mary Austin (Lucy Boynton) is presented as the one relationship in his life that he clings to — but that feels less like a desire to whitewash his gayness and more like an attempt to address the very believable possibility that a gay man of his time and place, with his upbringing, would find himself reluctant to abandon a relationship that represented a life he'd been brought up to expect for himself. But Bohemian Rhapsody isn't content to let that, or indeed any, ambiguity linger. "The worst part," says Mary, during their breakup scene, "is that it's not your fault."

Point of order here: His sexuality is not his fault. But his decision to remain romantically involved with her for years, effectively denying her the possibility of a full, sexually active relationship (while secretly indulging his own appetites) is, uh, very much his fault. And that's what the film glosses over; its tireless need to lionize Mercury causes it, again and again, to give him a pass. Thus the portrait we get of him lacks any characterizing texture or contradictions and only succeeds in flattening him nearly beyond recognition.

In the process, it flattens history, in the too-familiar way biopics are wont to do. There's a scene in the 1994 film Mrs. Parker and the Vicious Circle in which someone says to young writer Harold Ross (Sam Robards), "Well if this magazine you want to create is to be about New York, why don't you call it ... (long, thoughtful pause) .... The New Yorker?"

In Bohemian Rhapsody, similar oof moments, which are meant to play on our familiarity with the source material, fall thick on the ground. A bandmate noodles around with a certain chord progression that will, we know, come to define both Queen as a band and its era. "What if we allow the audience to participate somehow?" another bandmate asks, before demonstrating a little something he's been working on — the stomp stomp clap, stomp stomp clap, stomp stomp clap that transforms the song "We Will Rock You" into a musical experiment in mass mind control. Such moments of cinematic rib-nudging can't help but feel cheesy. But here, when they concern themselves directly with Queen's music, they work.

Because that music works. It's big, it's cheesy, it's bombastic ... which is to say: It rocks. Singer/Fletcher filmed the hell out of the movie's musical performances, locating that insistent hormonal thrum that bypasses the higher brain functions and makes straight for the pleasure centers. The film is bookended by the band's performance at Live Aid in 1985, which looks great, with soaring pseudo-drone shots of the crowd at Wembley Stadium thronging around the mid-field production booth like pilgrims circling the Kaaba.

The crowd and the stadium are fake, of course — they gleam with the too-clean crispness of CGI. Your brain processes this, acknowledges this, then immediately waves it away, because at that moment Malek-Mercury is singing his guts out on "Radio Ga Ga."

Understand: Empirically, "Radio Ga Ga" is a terrible, terrible song. You know this — you process, acknowledge and wave it away — because it rocks. And in those moments like that one, when Bohemian Rhapsody allows its excessive yet structurally shaky narrative scaffolding to fall away so it can shut up and play the hits already, the film manages — almost despite itself — to (stomp stomp clap, stomp stomp clap) rock you.