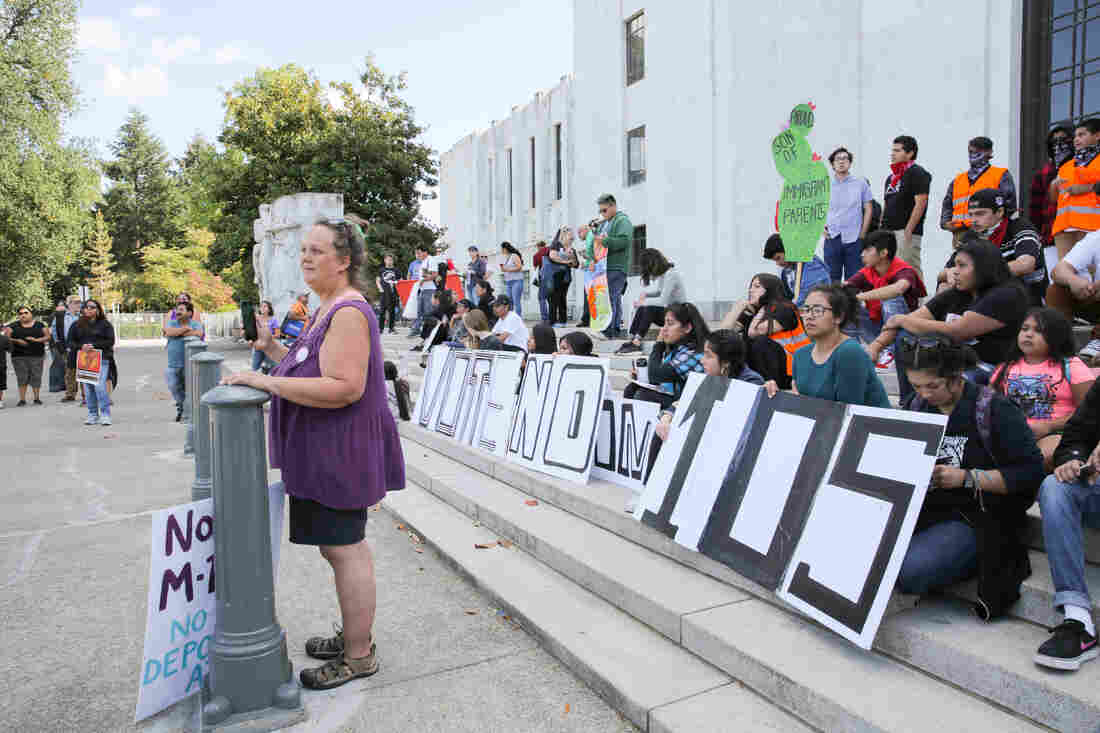 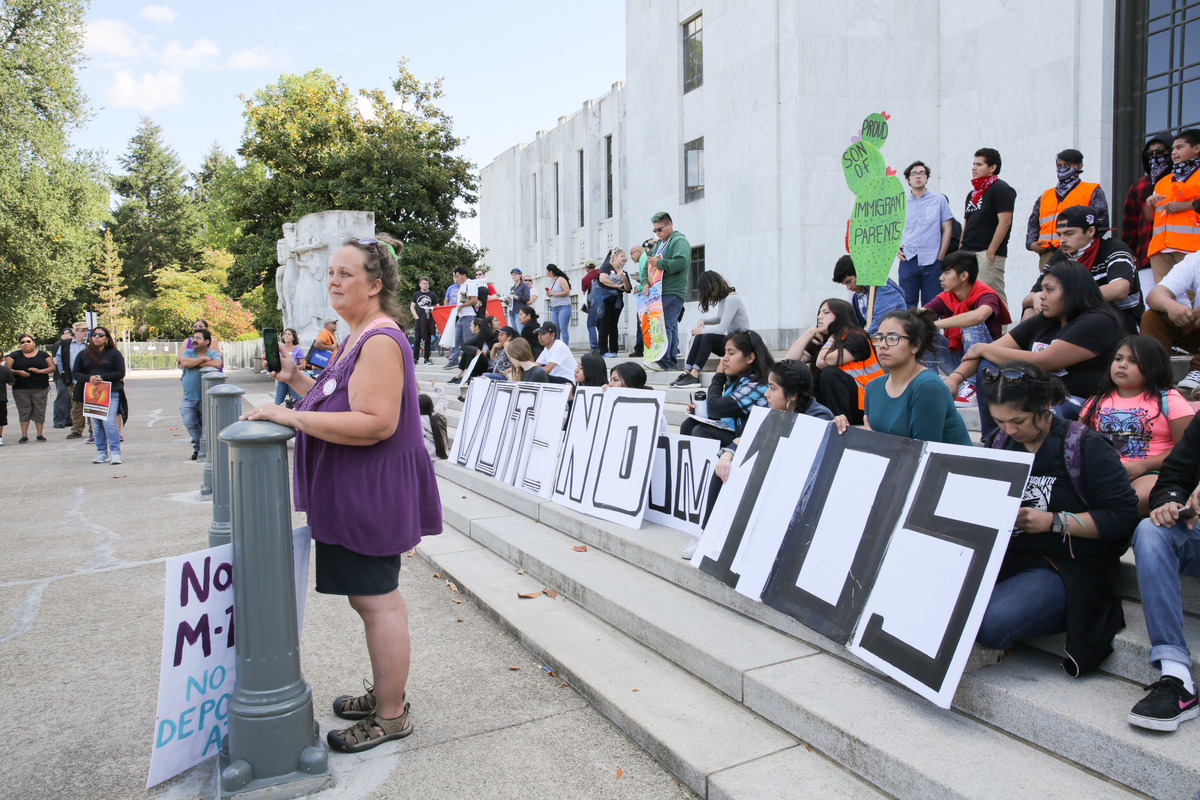 Oregon's sanctuary law is one of the oldest in the country. It was signed into law in July 1987 — more than 31 years ago.

"Both Republicans and Democrats voted for the bill," says Rocky Barilla, the Democrat and former state representative behind the law. "It was really not controversial."

But half the state's sheriffs — largely from more conservative, rural parts of the state — want to do away with the law.

The legislation says no law enforcement agency can use its resources for the sole purpose of detecting or apprehending people whose only violation is being the country unlawfully. It limits local and state police from enforcing federal immigration policies. Barilla says the legislation was intended to reduce racial profiling.

"To be honest, this was not meant to be a sanctuary law," he says. "It was meant to protect local city resources."

California's sanctuary law is similar to Oregon's. Five other states and hundreds of counties also have a form of sanctuary policy.

The law that was once seen as bipartisan isn't seen that way anymore. Now, voters in Oregon are casting ballots on Measure 105, which could repealed the decades old law. A recent poll in Oregon found neither side of the sanctuary law repeal had a majority—and 20% of voters were undecided.

Supporters of the law say it establishes trust between immigrant communities and law enforcement. They've rolled out a series of ads urging Oregonians to vote no on Measure 105, and law enforcement officials in more liberal and urban parts of the state are lining up against repeal.

"Communities we serve know that we're focused on protecting and serving them," Reese says. "We're not worried about their immigration issues." 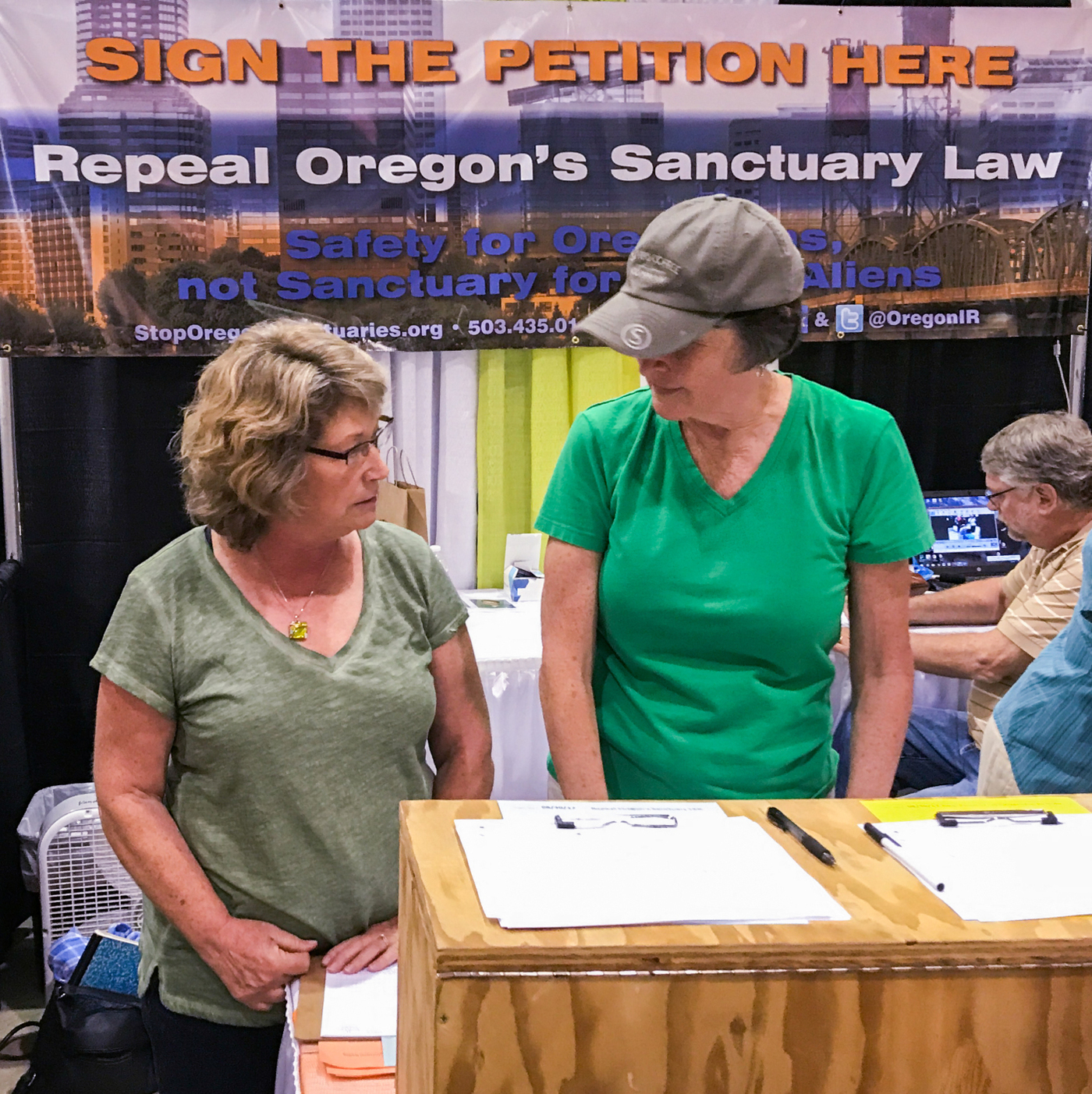 Cynthia Kendoll, left, talks with volunteers at the Oregon State Fair booth of Oregonians for Immigration Reform last year. The group gathered signatures to get Measure 105 on this November's ballot. If passed, the measure would repeal Oregon's 31-year-old sanctuary law.

The repeal effort in Oregon got underway after President Donald Trump was inaugurated.

"Politicians have protected illegal aliens with dangerous sanctuary policies that put Oregon citizens at risk," argues an ad paid for by the Federation for American Immigration Reform—a group that wants to restrict immigration. "It's time to stand up for safe communities."

Cynthia Kendoll is the president of the group that petitioned for repeal: Oregonians For Immigration Reform. She started collecting petition signatures last year to get Measure 105 on this November's ballot. Kendoll defended the repeal during a debate this fall.

"The problem is that a law that was passed in 1987 to curtail racial profiling...is now being used to shield people that are in our country illegally," she says.

Kendoll has called immigrants who are in the country illegally "an assault" on American culture, and has portrayed them as dangerous.

"We are recycling criminal aliens, putting them back on the street, so they can inflict their damage yet again," she says.

Kendoll was referring to there to high-profile cases of violent offenders who were in the U.S. illegally when they committed their crimes. Research shows immigrants commit crimes at the same level – or less – than native born Americans.

But it's the same type of argument President Trump and his supporters have been making more vocally leading up to the midterm elections.