Accessibility links
'Punks Not Dead,' And Neither Is This Intrepid Granny David Barnett and Martin Simmonds' comic about a troubled teen haunted by the ghost of Sid Vicious really gets going when it introduces centenarian (but immortal) ghost-buster Dorothy Culpepper. 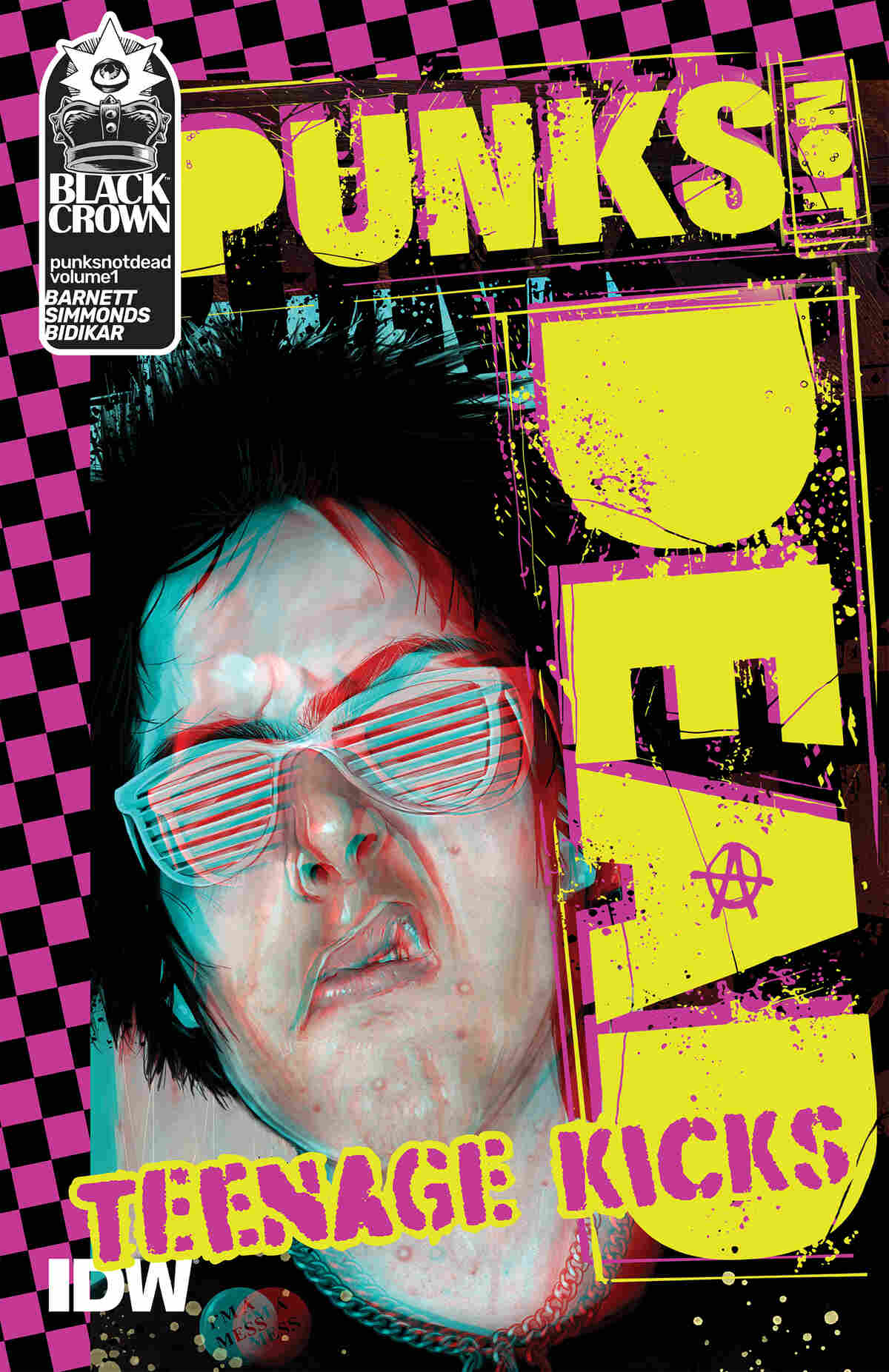 by David Barnett and Martin Simmonds

The new British comic Punks Not Dead reiterates what we would all do well to remember: Old ladies are badass. Despite a story revolving around punk rock's most notorious figure, Sid Vicious himself, this comic only starts to hum when a centenarian takes the stage. She's occult expert Dorothy Culpepper, a secret government agent who travels around Britain dealing with troublemaking ghosts. There's a degree of cheesiness to her character — starting with her "this'll get 'em" name — but there's also a lot to wholeheartedly enjoy. Dorothy is over 100 (thanks to a dip in the Fountain of Youth back in 1923) and looks it (thanks to a fight with a particularly vicious demon in more recent times) but dresses in the mod garb of her favorite era. There's something mesmerizing about this skeletally skinny grandma in her color-blocked minidress, beehive hairdo, knee-high boots and bug-eye shades.

Dorothy is much more interesting than the designated protagonist of Punks Not Dead, a gloomy teenager named Fergie who's haunted by Sid Vicious' ghost. Funnily enough, though, the creators seem to realize this only gradually. It's fascinating to watch what at first appears to be a secondary character take over more and more of the page count as this collection progresses. Not only does Dorothy figure ever-larger in writer David Barnett's narrative, but her increasing presence seems to goad artist Martin Simmonds into unleashing his creative id. During Dorothy's adventures Simmonds switches up his color palette from page to page, plays around with his compositions and deploys all sorts of quirky gimmicks, from ink spatters to Ben-Day dots.

In fact, it's only where Dorothy's concerned that the art of Punks Not Dead looks, well, punk. Her sections have a jittery, mashed-up quality; they feel like a reasonable visual complement to such anarchic music. True, they're a little too smooth and slick, but they've got the right spirit driving them.

It's too bad Dorothy's story doesn't really get going until several issues in. The early part of this comic is devoted to the aforementioned teen and his ghost pal. Fergie is unrelentingly mopey, but to be fair, he has reason: He's an outcast at school, he doesn't know who or where his father is, and his mother earns money by dragging him onto talk shows and making him pretend to be an unrepentant juvenile delinquent. ("Lazy good-for-nothing son: Drugs and gay porn," says the chiron on the Johnny Kale show.) But Fergie doesn't perk up even after meeting the ghostly Sid in Heathrow Airport. And he goes right on whinging (to use a Britishism) even after discovering he has mystical powers.

More problematic than the droopy hero, though, is the ho-hum look of Fergie's storyline. Simmonds has chosen to use scrubbed-clean lines and subtle colors to evoke the marmoreal smoothness of our tech-saturated era. But the ghostly Sid ought to float above this bland surface like a fragment torn from a newspaper. Instead he blends in.

It's fascinating to watch what at first appears to be a secondary character take over more and more of the page count as this collection progresses.

Even so, this doesn't doom the book. The ever-inventive Barnett delivers a zippy mix of well-paced supernatural hijinks and clever 1970s-80s music references. In the episode "Pretty in Punk" we see Fergie's mom in full Siouxsie Sioux regalia. She has magical sex with Fergie's dad, a mysterious figure. A particularly winning moment is when a psychic flash mob breaks out in Lancashire, and dozens of old people start compulsively dancing, Northern Soul-style.

Watching Dorothy try to dispel the flash mob, track down Sid and stop the murderous demon who's behind it all is the best part of Punks Not Dead. Since her exploits and backstory become more involved as the book progresses, it becomes steadily more fun. By the end we've seen Dorothy get it on with Mick Jagger, hang out with Aleister Crowley, exorcise various spirits and turn heads from the Ritz to Carnaby Street. We never learn what relationships she may have had with the living Sid Vicious — or any other punks, who surely would have sneered at her throwback style. But by the end of this volume it's clear that, one way or another, this old lady would have given them a run for their money.