Accessibility links
Google Employees Walk Out To Protest Company's Treatment Of Women Many at Google have been simmering since The New York Times reported the company gave generous exit packages to alleged harassers. Thousands of employees walked out of its offices around the world. 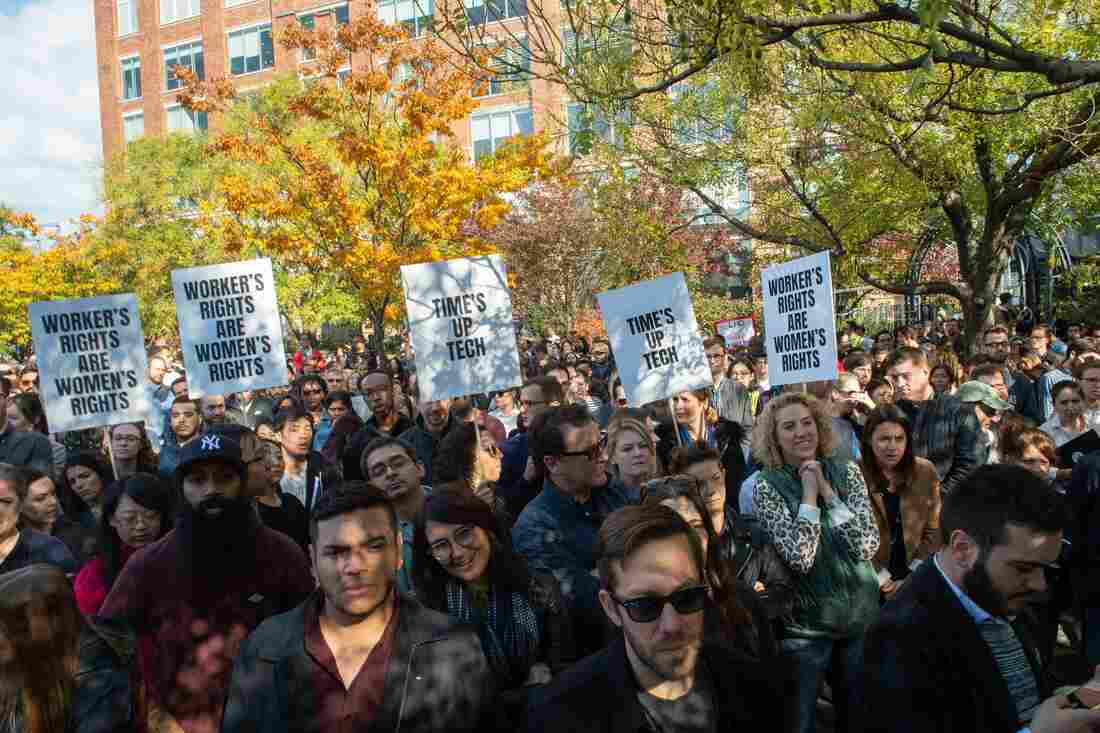 Google employees stage a walkout on Thursday in New York City and at Google offices around the world over how the company has handled sexual harassment. Bryan R. Smith/AFP/Getty Images hide caption 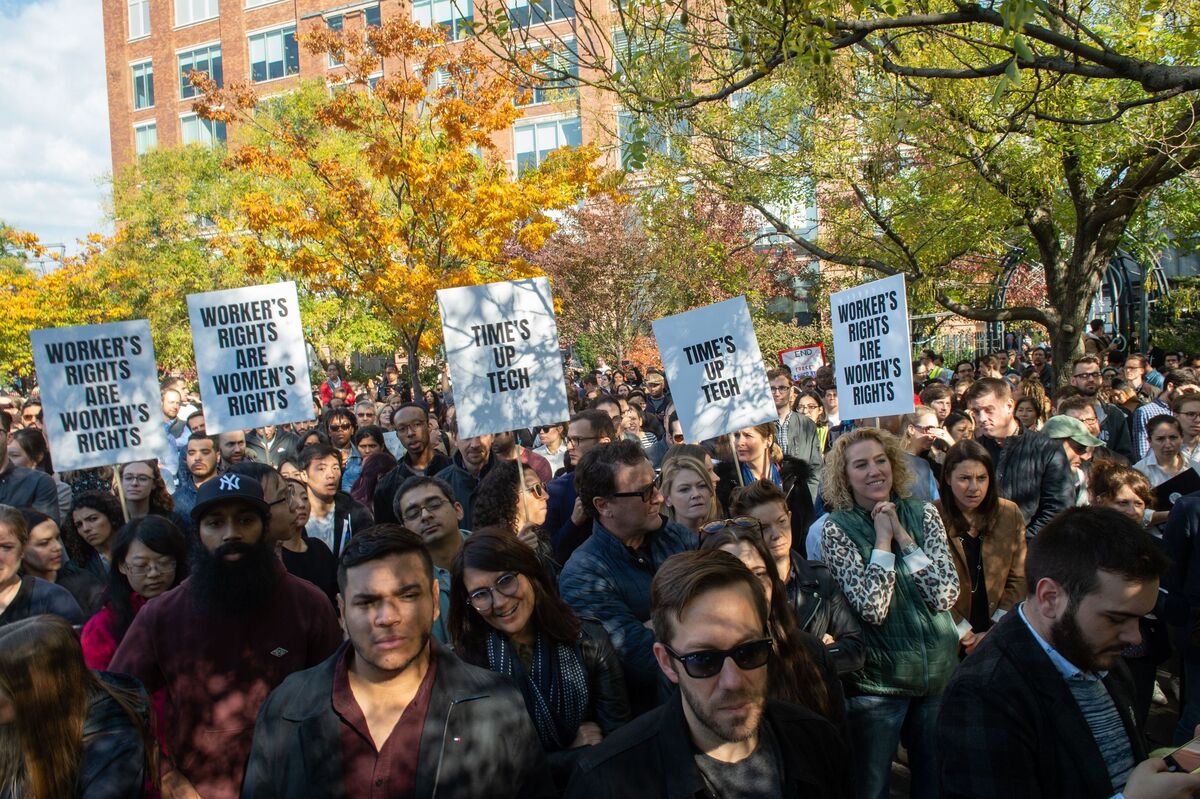 Google employees stage a walkout on Thursday in New York City and at Google offices around the world over how the company has handled sexual harassment.

Google employees worldwide are walking off the job to protest the company's treatment of women and its handling of sexual assault cases.

They walked out of Google offices at 11:10 a.m. local time Thursday in Singapore, Zurich, London, Dublin and New York City, filling nearby streets, sidewalks and parks.

And in California, home to Google's headquarters, employees streamed out of its offices into plazas.

The line of Googlers walking to the rally goes as far as you can see #googlewalkout pic.twitter.com/84GXSo8VaE

Amazing turnout for #GoogleWalkout at the Plex today. Proud of all my colleagues standing up for what's right. pic.twitter.com/GrB2fXrIbE

"We've always been told that Google is a leading-edge company, that our culture is something really special. And in that way, we totally have the space to walk out and do this today," said Claire Stapleton, a New York-based marketing manager for YouTube and one of the walkout's core organizers. "But we also see some very real changes that need to happen."

She said the walkout isn't just about women but also about people of color, contractors and others at the company who have experienced "feeling diminished or disrespected, have experienced feeling unsafe."

Organizers are calling for an end to forced arbitration, a commitment from the company to end inequities in pay and opportunity, a publicly disclosed sexual harassment transparency report, and a safe and anonymous process for reporting sexual misconduct at Google.

The employee protest comes a week after The New York Times published an extensive report on sexual harassment at the company. Andy Rubin, the creator of the Android software operating system, was accused by a female colleague of coercing her to perform oral sex on him in 2013, the Times reports.

Very proud to participate in the #googlewalkout today showing solidarity with my colleagues, fighting for equality and demanding real change ! pic.twitter.com/QN5gzkigPr

Google employees at the company's U.K. headquarters are staging a walkout to protest how the tech giant has handled sexual harassment pic.twitter.com/8s8CxIkfpt

Google reportedly found the allegation credible, asked for his resignation and gave him an exit package worth $90 million.

The company did not mention the allegations in the announcement of his departure.

Rubin has tweeted, "These false allegations are part of a smear campaign."

We, Google employees and contractors, will walkout on November 1 at 11:10am to demand these five real changes. #googlewalkout pic.twitter.com/amgTxK3IYw

Walkout organizers told NPR in an emailed statement: "As Google workers, we were disgusted by the details of the recent New York Times article, which provided the latest example of a culture of complicity, dismissiveness, and support for perpetrators in the face of sexual harassment, misconduct, and abuse of power.

"For every story in the New York Times, there are thousands more, at every level of the company. Most have not been told."

Since the Times report, the company's leadership has been dealing with an agitated workforce, according to multiple reports.

"While Google has championed the language of diversity and inclusion, substantive actions to address systemic racism, increase equity, and stop sexual harassment have been few and far between," organizers say.

Some demands relate directly to Google's workforce gender makeup: Only 31 percent of its global workforce and just over a quarter of its executives are women. 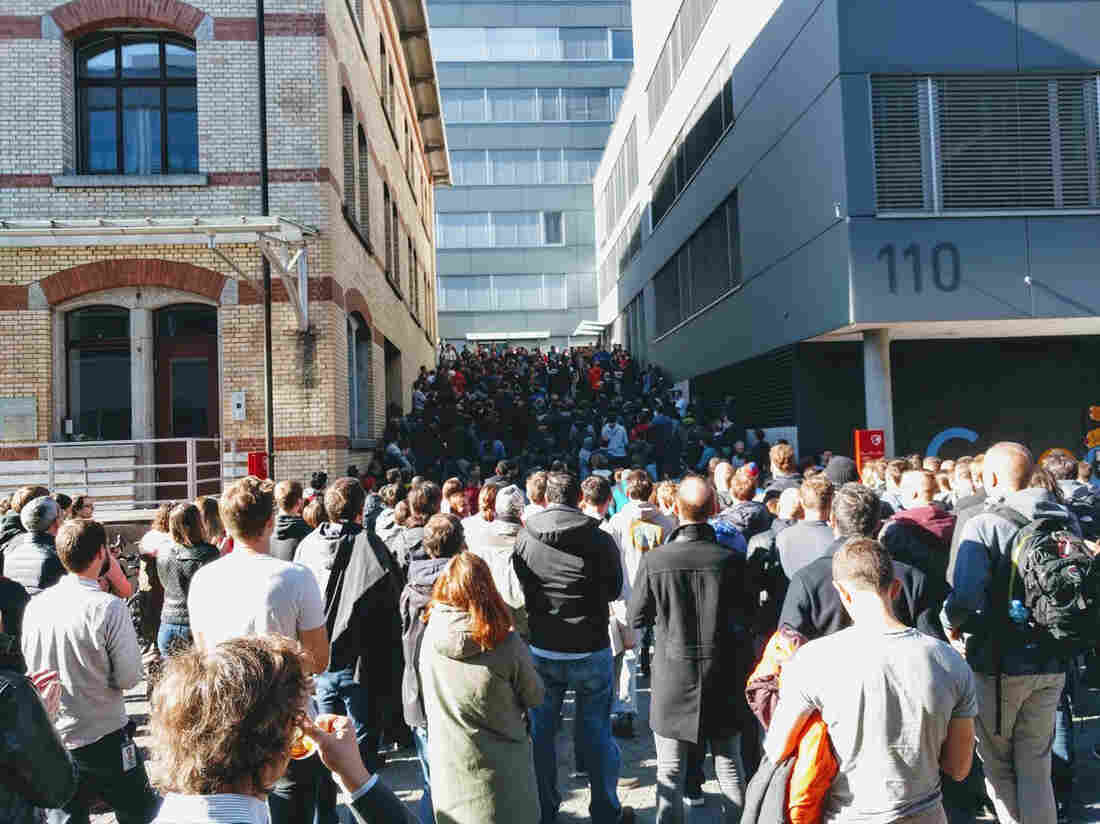 People participate in a walkout at the Google office in Zurich on Thursday. @tedonprivacy via Reuters hide caption 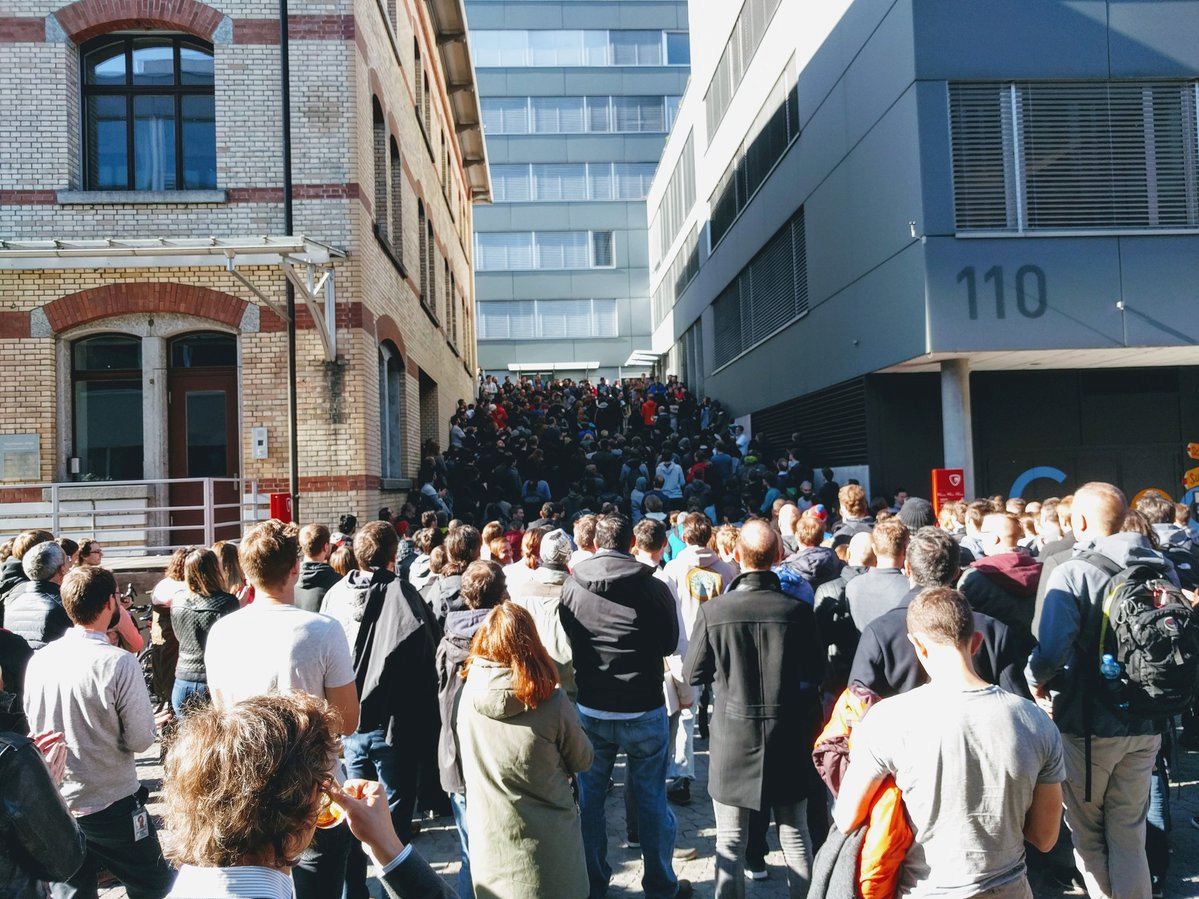 People participate in a walkout at the Google office in Zurich on Thursday.

Tomorrow I will be at the #GoogleWalkout and ask Andy Rubin to release his records and Google to hire an independent investigator.

"This is part of a growing movement, not just in tech, but across the country, including teachers, fast food workers, and others who are using their strength in numbers to make real change," organizers said.

Stapleton, one of the walkout's organizers in New York, said she hopes Google can change its culture. She said the past week had actually restored her faith in the company, as she worked with colleagues on a wide spectrum of issues.

"We have tremendous allies," she said. "I mean, we immediately took the name 'women' out of the walkout because we had so much support from men. And we wanted this to feel really inclusive, and for this to be about a bigger thing than one executive payout.

"I think if change can happen anywhere I hope it's here," she said. "But we'll see."