Accessibility links
Trump Escalates Immigration Issue Days Ahead Of Elections With White House Remarks President Trump addressed what the White House called a "crisis" of illegal immigration on Thursday, underscoring what has become the central focus of his midterm election campaign. 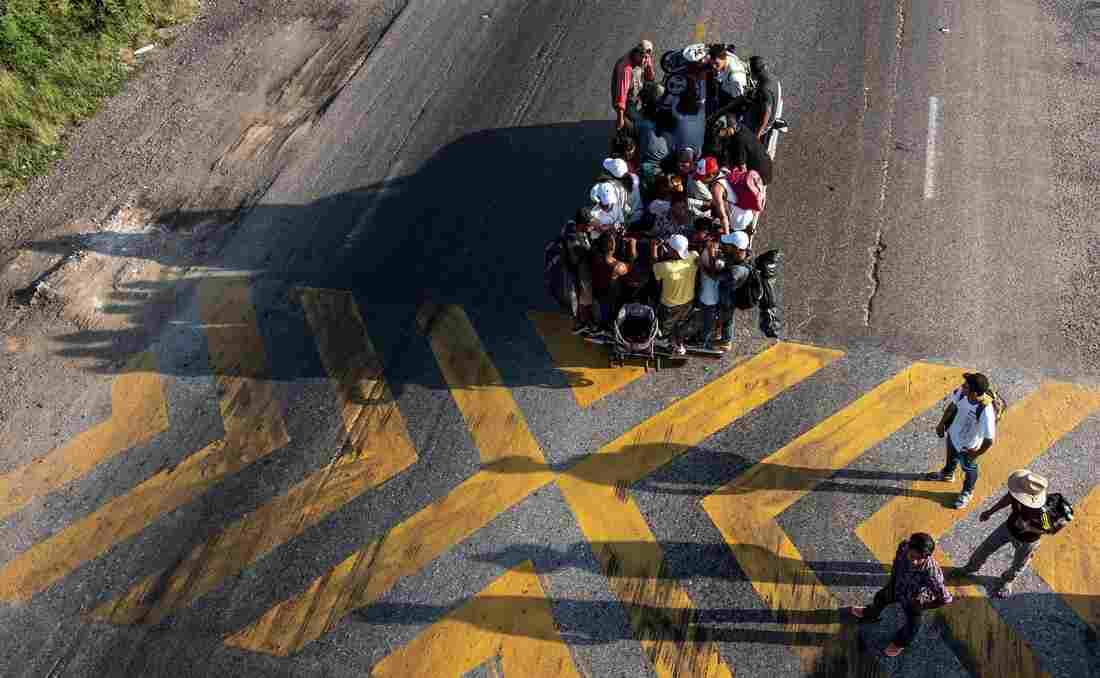 Migrants headed to the U.S. ride on a truck on the road from La Ventosa to Matias Romero, Oaxaca state, Mexico, on Thursday. Guillermo Arias/AFP/Getty Images hide caption 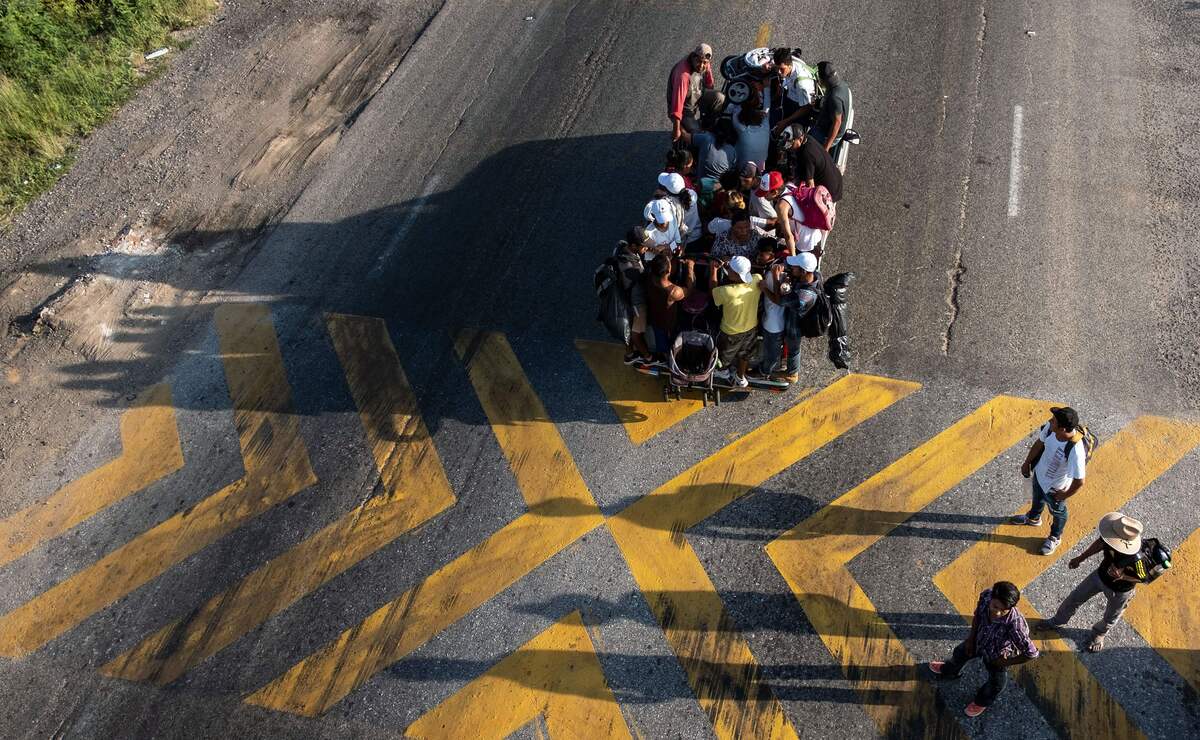 Migrants headed to the U.S. ride on a truck on the road from La Ventosa to Matias Romero, Oaxaca state, Mexico, on Thursday.

President Trump delivered a White House broadside against illegal immigration Thursday, underscoring what has become his central focus in the final days of the midterm election campaign.

The televised speech, delivered from the Roosevelt Room, offered little in the way of specific policy prescriptions. But it served to elevate an issue that Trump has been hawking at campaign rallies and on Twitter. Aides promoted the president's remarks as an update on the "illegal immigration crisis," although unauthorized border crossings remain far below their historic highs.

Trump promised to crack down on what he called the abuse of the asylum process and delivered a stern warning to a group of Central American migrants slowly making their way through Mexico, who have set their sights on the United States.

"Let me begin by stating that these illegal caravans will not be allowed into the United States," Trump told reporters. "They should turn back now, because they're wasting their time."

He argued that migrants have been gaming the system by falsely claiming fear of persecution at home.

"Asylum is not a program for those living in poverty," Trump said.

The president said he is finalizing a plan that would require asylum-seekers to present themselves at U.S. ports of entry — a move that immigration advocates called illegal.

"This president, who likes to proclaim himself a law-and-order president, is proposing things that clearly contradict our domestic law," said Karen Musalo, director of the Center for Gender and Refugee Studies at U.C. Hastings College of the Law.

Trump has offered no evidence for his repeated claims that the migrants include dangerous criminals and "unknown Middle Easterners."

"Most of what he said was very misleading and very clearly intended to stir up fear and emotions," added Denise Gilman, director of the Immigration Clinic at the University of Texas Law School. "That does not match at all with the reality of what we're seeing in terms of Central American asylum-seekers."

But the president has scarcely strayed from the immigration playbook, convinced it will energize GOP voters in red states where control of the Senate is likely to be decided — even if it alienates voters in more diverse, suburban districts that could tip the balance of power in the House to the Democrats.

Earlier this week, Trump challenged the idea that any child born on U.S. soil is entitled to American citizenship — a principle of the 14th Amendment to the Constitution that dates back more than a century. Most legal scholars say his plan to end birthright citizenship is unconstitutional.

The Trump campaign also unveiled an incendiary video this week, spotlighting a Mexican national who entered the U.S. illegally and was later convicted of killing two California sheriffs' deputies. The ad has drawn comparisons to the racially charged Willie Horton ad used against Michael Dukakis in the 1988 presidential campaign.

This is hardly new territory for Trump, who kicked off his presidential campaign in 2015 by denouncing Mexican migrants as "rapists" and drug dealers. And his tough talk appeared to have an immediate effect. During the first six months Trump was in office — February through July 2017 — illegal border crossings plunged 56 percent from the same period a year earlier. 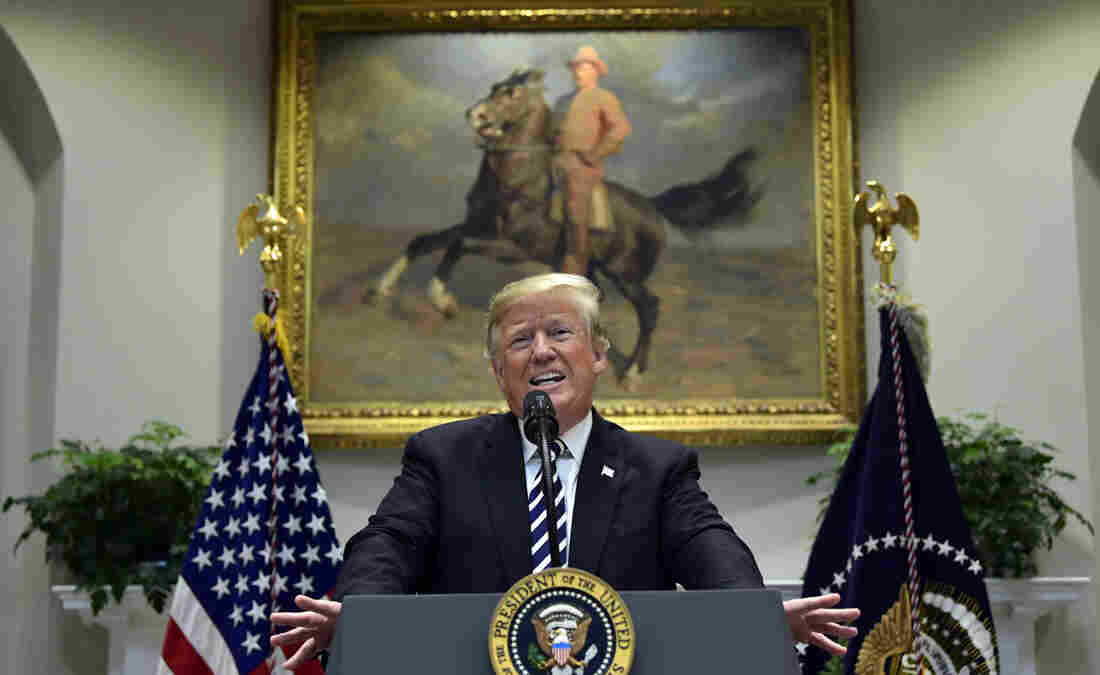 President Trump talks about immigration and gives an update on border security from the Roosevelt Room of the White House on Thursday. Susan Walsh/AP hide caption 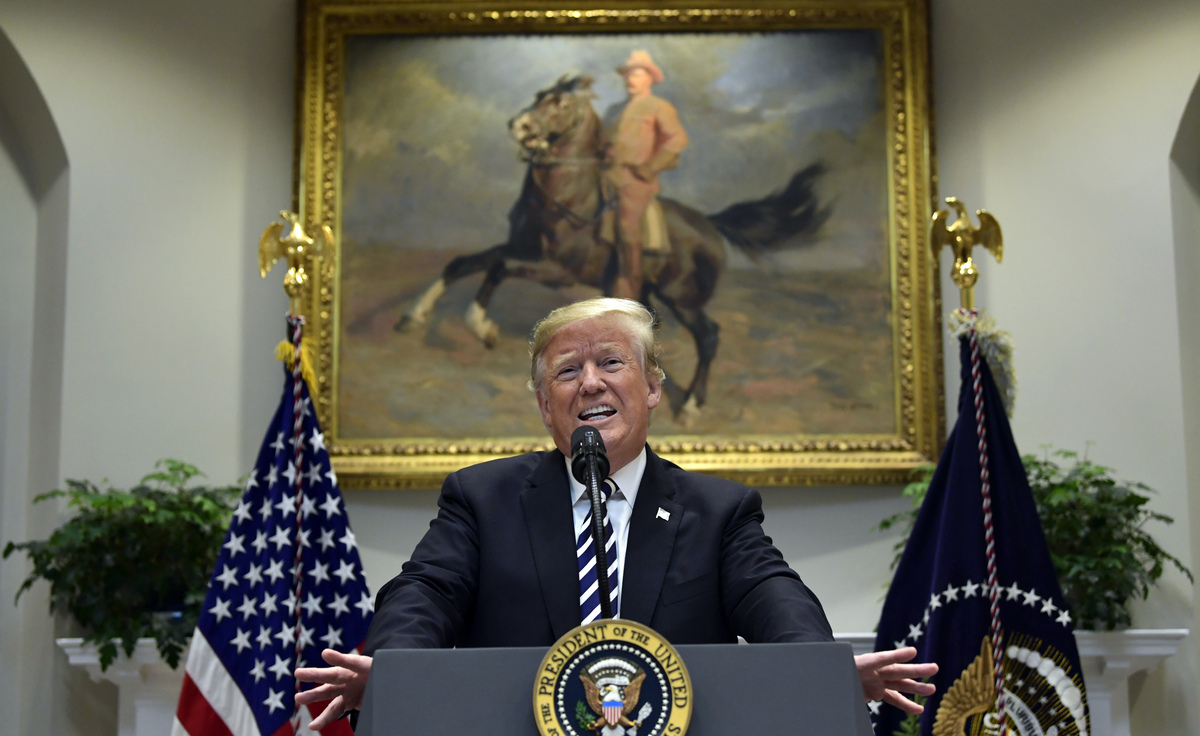 President Trump talks about immigration and gives an update on border security from the Roosevelt Room of the White House on Thursday.

But unauthorized crossings along the U.S. border with Mexico have since rebounded, with more than 521,000 people apprehended in the 12 months ending in September, according to U.S. Customs and Border Protection.

That's still far below the levels of illegal immigration in the peak years of the late 1990s and early 2000s. But officials say the profile of the people crossing the border has changed, complicating matters for U.S. enforcement agencies.

A generation ago, most unauthorized border crossers were single adults from Mexico looking for work. If apprehended, they could quickly be deported. Today, more than 40 percent are families or children traveling on their own. In many cases, the migrants come from Central America seeking asylum, saying they fear persecution if sent home.

Processing those asylum claims can take months or years. Under law and court decree, children cannot be detained for more than 20 days. As a result, families are often released in the U.S. with instructions to return for a later court date — a procedure the Trump administration disparages as "catch and release."

The administration tried to get around that this spring by separating families — detaining parents while turning children over to the Department of Health and Human Services. But after a public outcry, that family separation policy was abandoned.

In Campaign Sprint, Trump's Immigration Focus Not A Winner For All GOP Candidates

The administration is now considering detaining families together — in tent cities or other facilities — as long as it takes to process their claims. It has filed notice of a proposed regulation aimed at sidestepping the 20-day detention limit for young people. But that regulation has not yet been finalized and is sure to invite legal challenges once it is.

The president has also mobilized the military, ordering more than 5,000 troops to the border to help "harden" ports of entry, transport Border Patrol agents, and otherwise provide support for border enforcement. U.S. Northern Command's initial estimate is that more than 7,000 troops will be pressed into service in Texas, Arizona and California. Trump hinted on Wednesday that he might order a broader mobilization of up to 15,000 troops.

The military says while some troops will be armed, their role will strictly be supportive, and they will not be tasked with border enforcement duties themselves. The U.S. military is prohibited from performing law enforcement activities.

The top Democrat on the Senate Armed Services Committee questioned the wisdom of the troop deployment in a letter to the president.

"This is not a military problem; it does not warrant a military solution," Sen. Jack Reed, D-R.I., wrote. "To date, the U.S. Department of Defense has provided no indication to the Senate Armed Services Committee that the migrant caravan — still about 1,000 miles and weeks away from reaching the U.S. southern border — poses a direct national security threat to the United States."