Accessibility links
4 Ways Republican Candidates Handle Trump In 2018 Election President Trump is not on the ballot but the midterm elections are a referendum on him. GOP candidates are using four strategies to discuss their close, not so close or nonexistent ties to Trump. 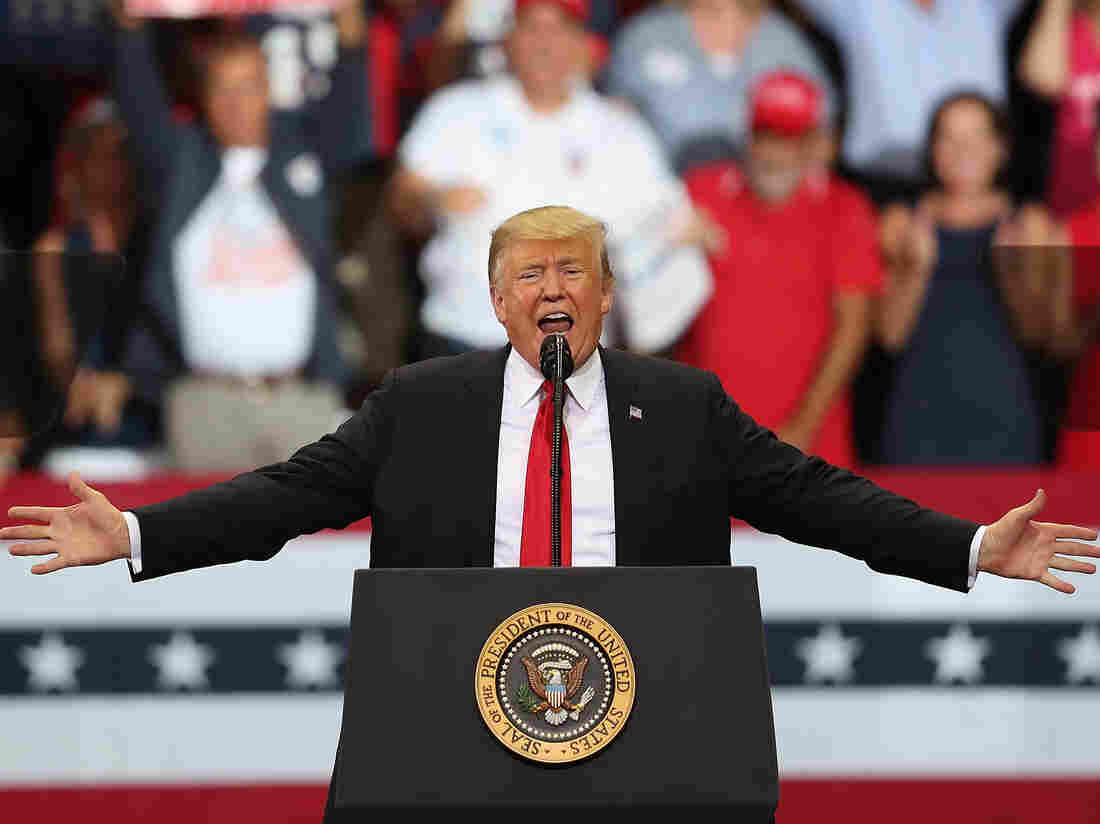 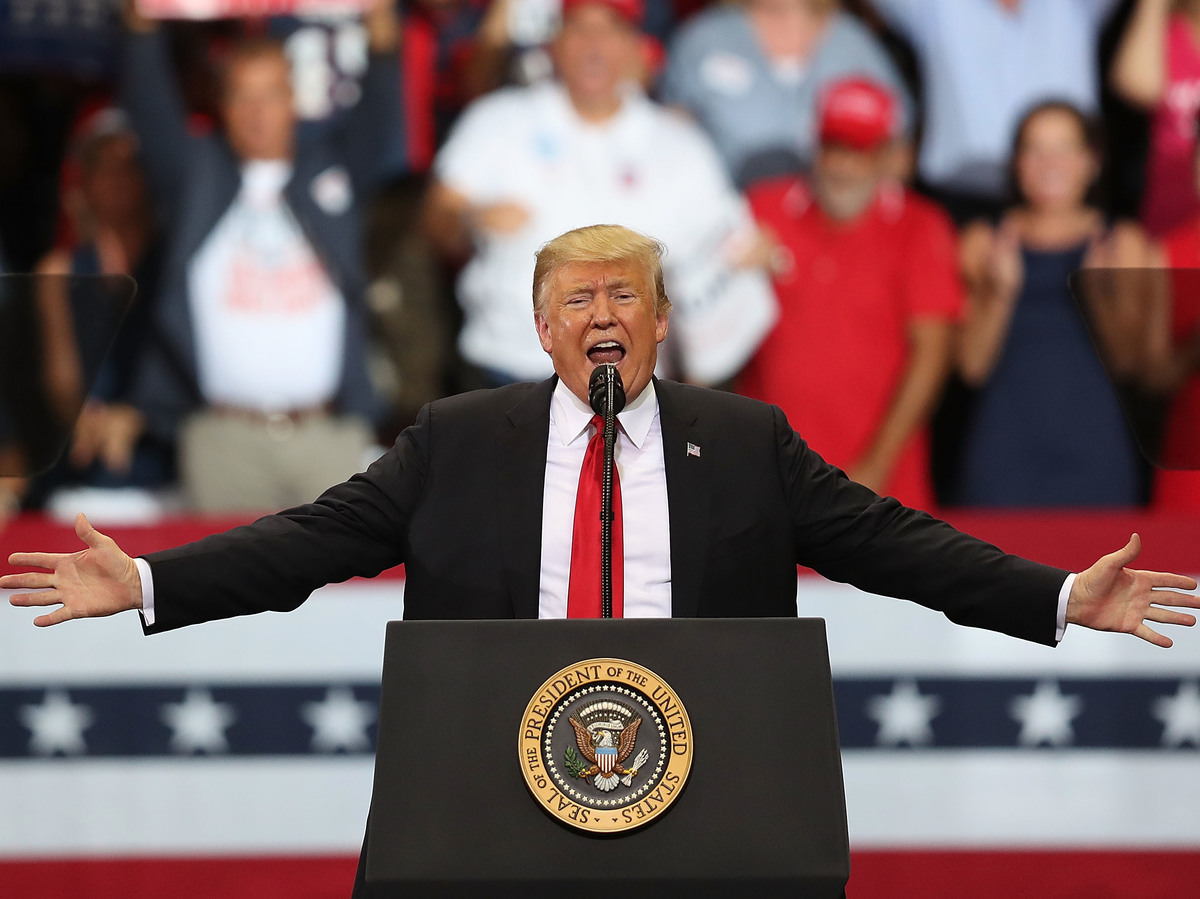 President Trump speaks during a campaign rally to help Republican candidates on Wednesday in Estero, Fla.

The last few weeks of any election are all about leaving one last impression with voters — a reminder of where a candidate stands and what he or she believes. This year in particular, the only closing argument that matters for Republicans is where they stand on President Trump.

Midterm elections usually are about the president to some degree, but 2018 is shaping up to be a nationwide rehashing of 2016's political feuds. Trump said so himself in a recent rally in Mississippi.

"I'm not on the ticket, but I am on the ticket," Trump said. "Because this is also a referendum about me and the disgusting gridlock that they'll put this country through."

Trump is right. Every Republican on the ballot will be judged on Trump's record, but the way candidates handle that reality really depends on where they're running.

By and large, Republicans spent the primaries reminding their core voters just how close they were to the president. They listed laws he signed that once bore their name. Many shared photos of a smiling handshake in the Oval Office with the president or a video of their meeting in a White House conference room.

But by the time the general election rolled around, Republicans in competitive races had to shift their message and decide just how closely they could embrace the president and still appeal to critical moderate and independent voters.

The NPR Politics team fanned out across the country in the final weeks before the election talking to candidates as they made their final pitches. We visited a dozen states, talking to Republicans running statewide for Senate and governor and in congressional districts that covered farmland, the suburbs and cities.

We discovered that Republicans have found four ways to run in a midterm election that is all about Trump.

Here are some examples of candidates who used the different approaches.

Trump's most ardent supporters can mostly be found running for the Senate, governor and in safe GOP congressional districts.

Candidates for offices in tightly contested Senate races in Republican-leaning states like Indiana, Montana, Arizona and West Virginia have all shared rally stages with Trump in the closing weeks of the election. In each case, their remarks follow a similar pattern. The candidate stands next to Trump to remind voters that a vote for him or her is a vote for the president's agenda.

Montana Republican Senate candidate Matt Rosendale shared the stage with Trump twice this year, including an appearance in October where he made a familiar pitch: A vote for Sen. Jon Tester, D-Mont., is a vote against the president.

"You are making America great again. And if we want to keep America great, then we need everyone here to get out and vote," Rosendale said, addressing Trump. "President Trump and all of his policies are on the line. So let's make history and retire Jon Tester and send President Trump the help he needs."

A far smaller number of House candidates in competitive districts have been willing to be so explicit. Mark Harris in North Carolina is one of the exceptions. He is running in a district that includes Charlotte and is betting on Trump despite the rapidly changing demographics in the area. Younger, more diverse voters are flooding to high-tech and professional jobs in the city, and Democrats are growing more confident about their chances.

But Harris welcomed Trump for a rally there last week and heaped on praise and also cited the president's favorite news source for an assessment of his performance — Fox News.

"The only things that haven't gotten done yet, we're going to do it in 2019 when the Congress convenes," Harris said. "Mr. President, I want to join you and let's get the job done."

In the closing stretch of a close campaign for re-election, though, Heller is not only sharing the stage with Trump at campaign rallies but showering the president with praise like "Everything you touch turns to gold."

Heller's shift from critic to close ally mirrors a journey — part change of heart, part political calculation — that many Republicans have made in the past two years. His could be the most dramatic about-face, however. "I didn't like him; he didn't like me," Trump acknowledged at a recent rally for Heller. "Then we started to like each other. Then, we started to love each other."

Heller frames the shift as the natural result of a productive relationship. He touts Republican results like tax cuts and increased funding for veterans, saying, "When you have success it builds trust; when you have trust it builds friendships."

But while migrating toward Trump has been rewarded by GOP voters in primary after primary, it's unclear how a calculation like Heller's will play in a general election in an evenly divided state like Nevada, where independent voters will play a key role.

Heller's opponent, Democratic Rep. Jacky Rosen, is framing the shift as a flip-flop, painting Heller as "Senator Spineless" in ads like this one and focusing especially on Heller's shift from a "No" to a "Yes" during the Republican attempt to repeal the Affordable Care Act.

If Heller and Trump's "love" leads to an Election Day loss, expect other Republicans who have made similar migrations to take note.

When Trump floated the idea of trying to overturn the 14th Amendment's guarantee of birthright citizenship through an executive order earlier this week, Utah Rep. Mia Love was quick to put out a statement opposing the trial balloon.

The response fits with the approach Love has taken in an unexpectedly close re-election campaign against Democrat Ben McAdams in her suburban Salt Lake City district. While Love by and large toes the Republican line on most issues and votes, and is quick to highlight Republican accomplishments like last year's major tax overhaul, she also repeatedly highlights the times she has disagreed with Trump, especially on immigration.

Love called Trump's policy of separating parents and children who enter the country illegally "absolutely horrific." She blasted his Oval Office comments about "shithole" countries as "unkind, divisive [and] elitist."

In short, Love is quick to keep Trump at arm's length any time he is controversial, but also quick to embrace the conservative measures and actions the Trump administration has advocated for. That approach reflects many Utah Republicans' continued uneasiness about Trump's approach, tone and personality but preference for most of his policies.

"I'm the only one in this delegation who has stood up to the president when he has done something wrong and have worked with him when he's done something right," she proclaimed during a recent debate.

The key question: whether occasional statements of disapproval are enough to satisfy voters who are looking for a congressional check on Trump's instincts.

There aren't many Republicans willing to reject the president completely, but Florida Rep. Carlos Curbelo has not been shy about going his own way.

Curbelo refused to endorse Trump in 2016 and has publicly opposed the president on climate change, trade and most famously on immigration.

Earlier this week he directly criticized Trump's purported plan to end the practice of automatically granting citizenship to all children born in the United States.

Birthright citizenship is protected by the Constitution, so no @realDonaldTrump you can’t end it by executive order. What we really need is broad immigration reform that makes our country more secure and reaffirms our wonderful tradition as a nation of immigrants. https://t.co/7xlbfrt6rW

He led a group of moderate House Republicans in a rebellion against party leaders to try to force a vote on an immigration bill to provide permanent legal protections for immigrants who are in the country illegally after being brought to the United States as children.

Immigration is a key issue in his district, which stretches from the suburbs of Miami south through farm fields and on to the tourist hub of Key West. About 70 percent of the population is Hispanic.

Roughly half of the Latinos in his district are of Cuban descent. Curbelo, the son of Cuban exiles, gets a warm welcome from a lot of voters because of that connection. He slips seamlessly between Spanish and English when talking to constituents and virtually never mentions Trump by name.

Instead, Curbelo talks about his bipartisan record and openly refuses to back down from his criticism of the president.

"I don't remember ever apologizing for anything I've said," Curbelo said in a recent interview with NPR. "Whatever I've said is what I believe. So why would I walk it back, you know?"