Accessibility links
#ShowUpForShabbat: Jewish Leaders Encourage Americans Of All Faiths To Join Leaders want to send a "resounding message that love triumphs over hate." An increased police presence at Jewish institutions will continue, as it has since the Pittsburgh shooting.

Listen · 4:17 4:17
Jewish Leaders Encourage Americans Of All Faiths To #ShowUpForShabbat 4:17 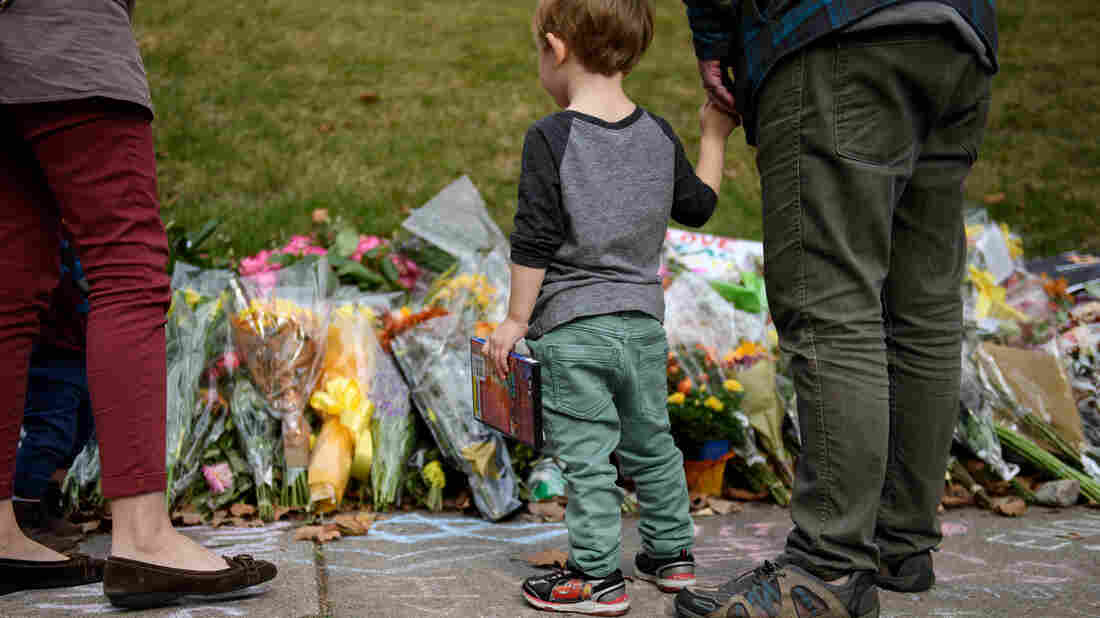 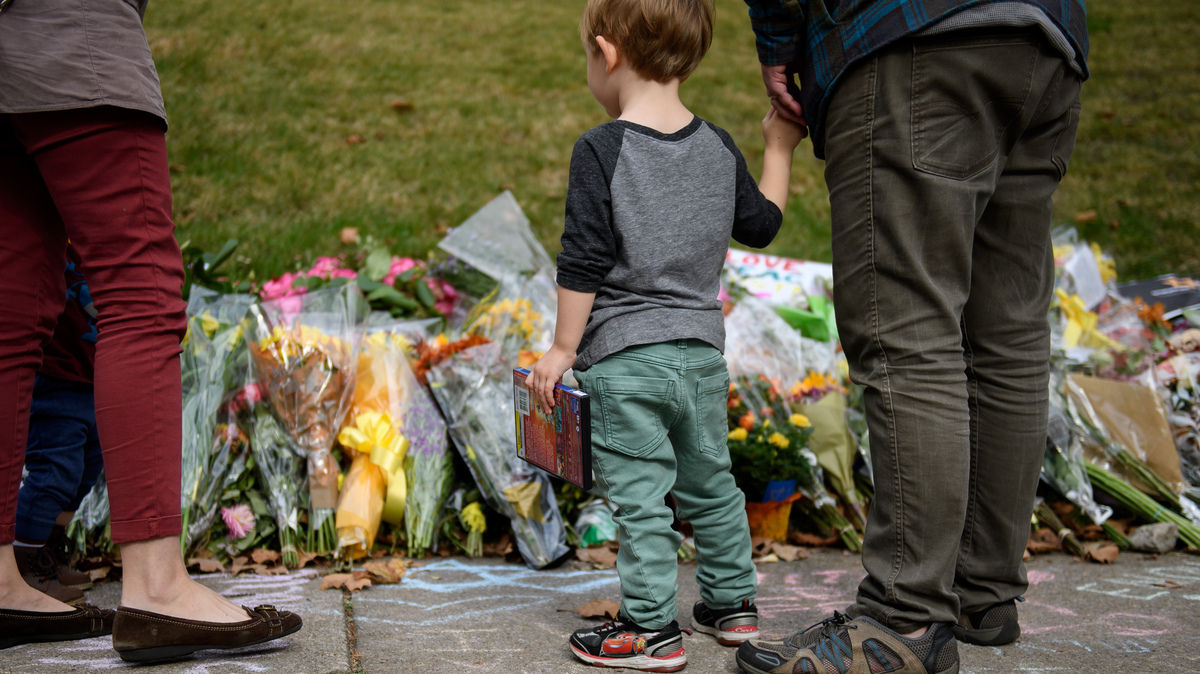 Mourners visit the memorial outside the Tree of Life Synagogue in Pittsburgh after eleven people were killed in a mass shooting last weekend. Security remains tightened as congregations prepare to celebrate Shabbat.

Friday evening marks the first Shabbat since the Pittsburgh synagogue massacre last weekend, and Jewish leaders want Americans of all faiths to come and send, "a resounding message that love triumphs over hate."

The American Jewish Committee (AJC) is spearheading the effort using the #ShowUpForShabbat social media campaign. It is to both show solidarity for the 11 victims killed at the Tree of Life synagogue, but also to signal that the Jewish community will not live in fear.

For those unable to attend Shabbat there will be a live stream of services from Central Synagogue in New York.

One of the partner organizations with the AJC, the Jewish Federations of North America, also said the event will be one of "prayer, compassion and unity — as one people."

"This Shabbat, we are responding with our greatest show of solidarity. A continental Solidarity Shabbat with the Jewish community of Pittsburgh," according to a statement by the federations.

We're delighted to announce that we're partnering with @AJCGlobal on the #ShowUpForShabbat campaign! Learn more: https://t.co/L5vrmMxDL3. Check out https://t.co/9byEJY1tad for resources and to find a participating synagogue. #SolidarityShabbat #StandWithPittsburgh pic.twitter.com/OpxVGljROc

Shabbat is observed from Friday evening to Saturday evening and is a day of rest, celebration and congregation.

Earlier in the day Friday, the last of the funerals for the Tree of Life victims will be held in Pittsburgh — for 97-year-old Rose Mallinger.

As people take part in services, the horror of last weekend will be inescapable, especially for those in the Steel City.

A beefed up police presence at Pittsburgh synagogues and other Jewish institutions will continue, as it has since the shooting.

'We practiced for that day, for the worst nightmare'

Just this summer, Brad Orsini led an active shooting training at the Tree of Life synagogue. He's the Director of Community Security with the Jewish Federation of Greater Pittsburgh.

He's a retired 28-year veteran of the FBI. A burly, Italian-American man with a shaved head who was raised Catholic, Orsini now teaches members of Pittsburgh's Jewish community how to stay safe.

It hurts me that Jewish Federation of Greater Pittsburgh has to even hire somebody like me to secure people because they want to go pray.

Part of his job is to help harden the city's synagogues and community centers to help fend off would-be attackers. He also conducts safety training at Jewish retirement homes, schools and daycare facilities.

Tree of Life Rabbi Jeffrey Myers was presiding over services when gunshots rang out last Saturday.

Myers had trained with Orsini, and Orsini had convinced Rabbi Myers to carry his cell phone during Shabbat services, even though that runs counter to Jewish tradition.

Myers told ABC News that, because of the training, he was able to call 9-1-1.

"I learned a number of important things from him. One of them was to carry my cell phone. I normally don't carry it on the Jewish Sabbath, but I learned from him. As he said, 'Rabbi it's a different world, you need to carry it.' And I'm so grateful." Myers said.

Orsini said the training helped prevent more lives from being lost that day.

Synagogues, churches and mosques in the U.S. have been adding security for years amid a string of mass shootings at houses of worship. Some have been paying for increased security measures through a Department of Homeland Security grant program.

For his part, Orsini said it pains him that his job exists.

"It hurts me that Jewish Federation of Greater Pittsburgh has to even hire somebody like me to secure people because they want to go pray."

Orsini said he left the FBI hoping he would never have to see another crime scene.

Then last week he found himself standing watch at the Tree of Life synagogue as Rabbis collected victim remains, according to their tradition.