Accessibility links
Rhiannon Giddens Is The 21st Century's Revelator Giddens' influence is not contained by her many accolades but by her drive to unearth forgotten stories, developing the ethos of a new reconstruction based in truth-telling. 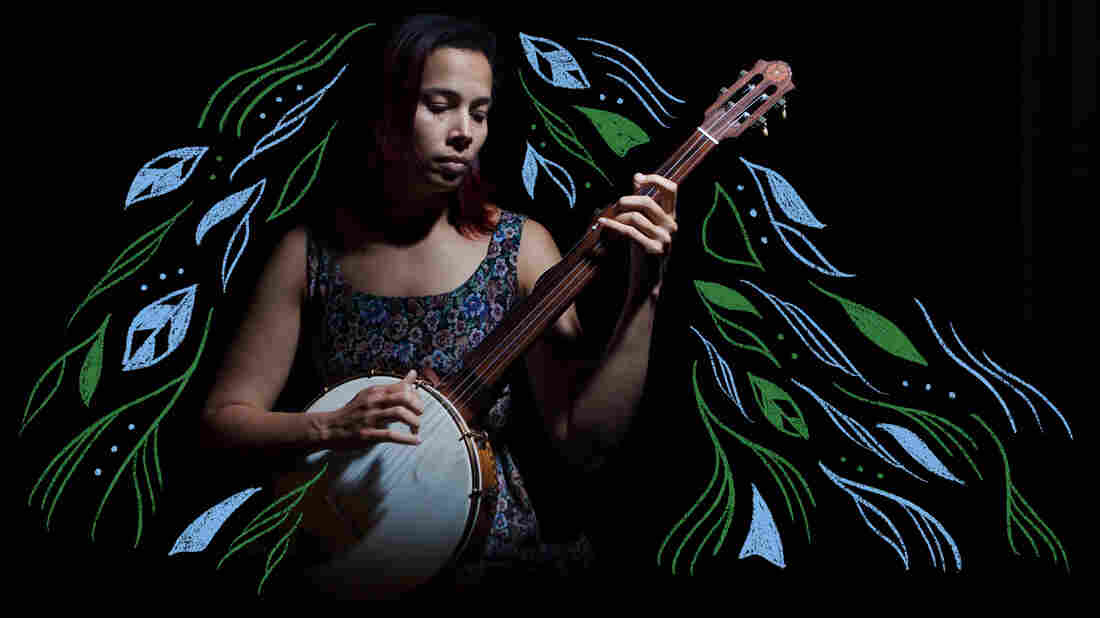 In her solo work and with the Carolina Chocolate Drops, Giddens has helped shepherd the revival of the black string band tradition in American consciousness. Claire Harbage and Angela Hsieh/NPR hide caption 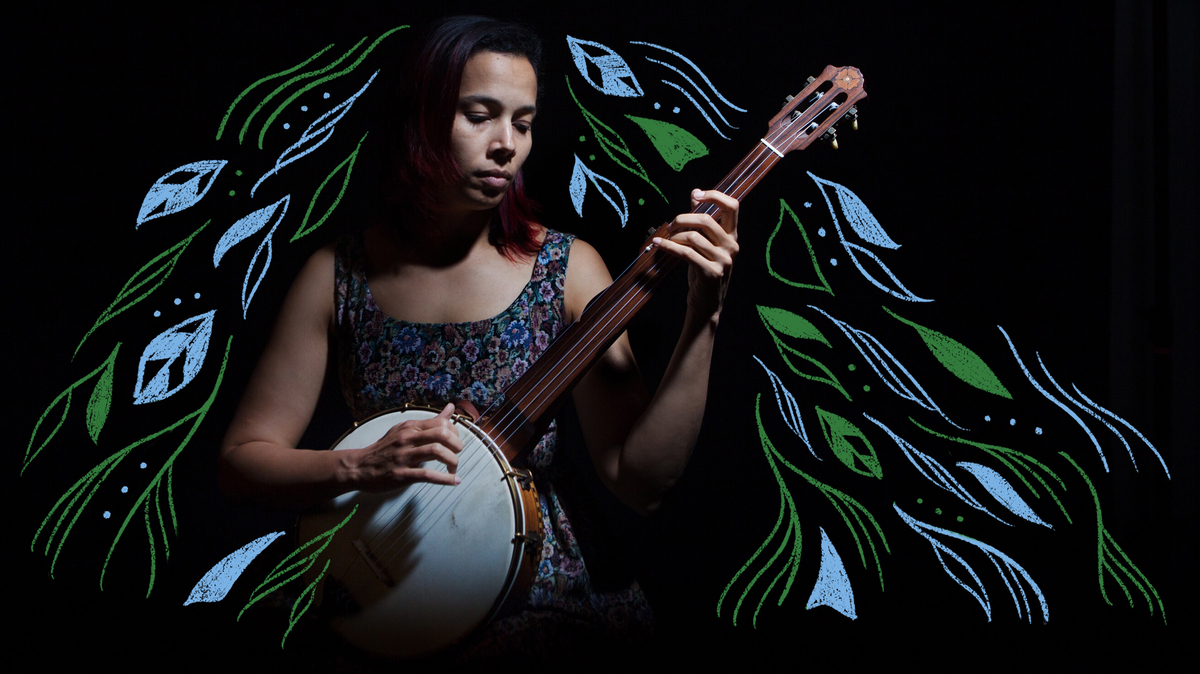 In her solo work and with the Carolina Chocolate Drops, Giddens has helped shepherd the revival of the black string band tradition in American consciousness.

Rhiannon Giddens is as bluegrass as they come. She's got receipts too: Raised in the North Carolina piedmont by a biracial family, Giddens would listen to her uncle's bluegrass band, The Southeast Express. She remembers a childhood with Hank Williams refrains and old gospel numbers cooing through the radio.

Giddens' earliest memories of songs, of accents and upbringings, point to an intrinsic sense of self — an internal homing radar. She is a proud North Carolinian, someone who knows her roots down to the coordinates.

To this end, what has defined much of Giddens' career is her drive to calibrate that inner feeling with the perceptions of the outer world; to actively defy long-held assumptions that American banjo and fiddle traditions were invented by, and belong to, white people only.

"When I first got into string-band music I felt like such an interloper," she said in a keynote speech to the International Bluegrass Music Awards Conference (IBMA) last year. "It was like I was sneaking into this music that wasn't my own... I constantly felt the awkwardness of being the raisin in the oatmeal." There was a cognitive dissonance for Giddens, a sense of "othering" — a pit-of-stomach suspicion that she did not really belong to the music she was interested in.

There is, of course, another argument to be made.

Giddens presents a direct threat to the pathological American disease of appropriation. It is a time-worn recipe, equal parts predictable and heinous. Black and Native people face near-total erasure from certain music styles they had a giant hand in creating — string band music and its brethren, old-time and bluegrass among them. This lack of acknowledgment, coupled with steadfast economic and political subjugation, has reared its head culturally in the mocking of Black and Native customs and personhood, often historically in song (minstrel shows) and symbol (big noses, lips, sports team mascots), leaving deep wounds with little reconciliation or reparations on the horizon.

Thus, seeing one's glorious brown face reflected in the world is necessary for the psyche for more reasons than one might think. Los Angeles-based arts researcher Wendy Hsu explained to the Washington Post that the idea of representation is about much more than simply seeing yourself in a work of art – it helps you feel connected to, or to see yourself as part of, a community. "It's often important for people to have this feeling of belonging, and it comes with things like social comfort, familiarity, the language that you speak, things that are really usually pretty intuitive like your family and social connections," Hsu told the Post. And for people who feel estrangement from their cultural roots – musically and otherwise — Hsu says the need is even greater and more urgent.

How Rhiannon Giddens Reconstructs Black Pain With The Banjo

Giddens' #FirstTimeISawMe moment marked a turn of the tides. "I remember so vividly the first time I saw one of Marshall Wyatt's superb compilations called Folks He Sure Do Pull Some Bow and seeing a picture of a black fiddler and freaking out," said Giddens during her IBMA keynote. "I had stumbled upon the hidden legacy of the black string band and I wanted to know more."

Along with others, the trio met weekly to study with their mentor, Joe Thompson, a fiddler and the last of a long line of Black string band musicians from North Carolina (Thompson was in his late 80s at the time). After multiple band iterations, Giddens, Flemons and Robinson formed the Grammy-winning Carolina Chocolate Drops. Says Giddens about that time: "I had joined an enormously long and almost forgotten line of black dance band musicians who helped create an indigenous American music and dance culture; of barn dances, corn shuckings, plantation balls, and riverboat and house parties."

When the Drops burst onto the scene, I was a pre-teen with a short brown Afro, braces and the same confused, turbulent relationship to American roots music. I was playing banjo at the time, and absolutely loved it. Yet ultimately, I chose not to reveal my playing to any of my friends lest I be lampooned for "being black and liking white music." As a biracial woman, most of my life was spent exhaustedly treading these pseudo-social lines. I felt tired.

When I first saw the Drops perform, banjos and fiddles in hand — at the Ottawa Folk Festival in Canada in 2007 — I sensed immediately that I was seeing myself for the first time. During the concert, Giddens spoke about the banjo as a West African instrument, a descendant of the akonting, the xalam and some 58 other stringed instruments from varying regions. This was the first time I'd heard the true history told, and I rejoiced quietly in the audience.

When the band's fourth album, Genuine Negro Jig, won the Best Traditional Folk Album at the 53rd Grammy Awards in 2011, I celebrated. And when I eventually met and became friends with Rhiannon, Dom and others in the band, I felt as if I had found a community of people I had been searching for most of my life.

The Carolina Chocolate Drops changed its lineup through the years, taking on multi-talented young acoustic musicians like Leyla McCalla and Hubby Jenkins. The group eventually wound down its shows in 2014 and the members went their separate ways after nearly ten years, thousands of shows, millions of miles and their original goal achieved: the near-singlehanded revival of the black string band tradition in American consciousness. With it, they'd played a small part in the righting of history.

When one considers the influential musicians of the 21st century, one might turn their mind to radio charts, to sold-out auditoriums and multiple shelves of awards. These feats are, of course, important — and Giddens boasts multiple accolades, including but not limited to: The Steve Martin Prize for Excellence in Banjo and Bluegrass, two Grammy awards (and four nominations), a North Carolina Music Hall of Fame Induction, a role on the popular TV show Nashville and most recently, the highly lauded MacArthur Fellowship (often called the "Genius Grant"), which she received last year.

Giddens' influence, though, is not contained by her many accolades but, more profoundly, by her drive to unearth the stories of forgotten people so that her audience may remember them. Most recently, Giddens has been working in partnership with writer John Jeremiah Sullivan on a theatrical treatment of the little-known Wilmington Insurrection of 1898, a post reconstruction-era Ku Klux Klan massacre of a political coalition of white and black townspeople in North Carolina, much of which has undeniable echoes to the present.

In a conversation with NPR's All Things Considered, Giddens elaborated on the massacre: "A lot of people were killed, which is horrible," she said. "But also there was this destruction of hope... It was an enormous setback for the black populist movement, for black political power. For not just black political power, but for the idea of working together."

In our millennial time of renewed Klan marches, of failed climate accords, of income inequality and blood quantum laws, the idea of working together seems laughable. Yet in her quiet, prolonged studies, Giddens has developed the ethos of a new reconstruction based in truth-telling through story. She schools herself on neglected atrocities and gives them a podium through music so that white folks can begin to understand and black folks can begin to heal. In an interview with The Guardian, Giddens says it plainly: "I don't care who you are. We have the time and the headspace for this stuff. The least you can do is take a moment."

Throughout her career Giddens has been reaching towards something more imperative than the honors and praise she's received. With every performance, she gently enters the listener's mind, whittling away at our fallacy of perception as reality. Her claims doggedly remain until we properly grasp that though photographs and TV shows might have only showcased white string band players, musicians of color have always been there, slightly out of frame and focus.

Most importantly, Giddens is continuing to make it possible for women of color to claim the space they deserve, and to create whatever kind of art they want within it. This, to me, is a gift.

As a guest curator of the Cambridge Folk Festival in the United Kingdom this past July, Rhiannon brought over Yola Carter, Amythyst Kiah, Birds of Chicago and I. All of us are varying shades of black, all of us have decidedly different voices and creative styles and all of us are worthy of an audience, a microphone and a paycheck. And whether we've told her or not, most of us know that Giddens has influenced us in carving a path to our own reconstruction. "When we rise, we rise together," she told me backstage, "that's how it should be."